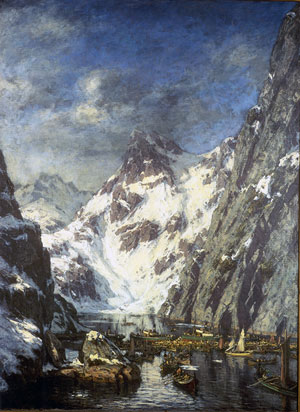 The Battle of Trollfjord, painted by Gunnar Berg

This article is a sidebar of Arista Holden’s article “The Last of the Vikings” about her experiences at Fosen Folk School in Rissa, Norway published in WoodenBoat magazine No. 261, March/April 2018.

For such a small country, Norway has a rich variety of traditional small boats—each one adapted to its particular region. And within those regions, there is further variety based upon the whims and styles of the builders.

Færings are among the best-known small boats in the country. They are propelled by two pairs of oars, which is what gives them their name: in the Old Norse language, it means “four oaring.” The færings of southern Norway tend to have curved, raked stems and are more heavily built than their plumb-stemmed, lighter cousins in the Nordland and Afjørd regions.

A fembøring has proportions and appearance similar to those of a færing, but it is larger, and driven by a squaresail in addition to oars. As mentioned by the main article’s author, Arista Holden, fembørings have distinctive cabins in the stern. These were built to be removable, and typically used for crossings from the mainland to the Lofoten cod grounds, and then carried ashore for land-based lodging, to make room aboard for fishing gear.

By 1890, the writing was on the wall for the open-boat Lofoten cod fishery. That year, a massive fleet of færings and fembørings encircled a fleet of industrial steam-driven vessels in an attempt to ban their access to the 2km-long (1.24 mile) Trollfjord. The incident is recorded in a painting by the Norwegian artist Gunnar Berg, who hailed from the Lofoten municipality of Svolvær.

You can experience a sampling of Norwegian small boats in the Boat Hall of the Norsk Sjøfartsmuseum in Oslo, which has, in addition to many other boats, a rigged fembøring on display. And the book Inshore Craft of Norway, edited by Arne-Emil Christensen from a manuscript by the Norwegian boat archaeologists Bernhard and Oystein Faerøyvik, is the standard introduction to the country’s small-boat types. —Eds.

Purchase this issue from the WoodenBoat Store