Inspired by such magazines as The Rudder, Yachting, and Yachting Monthly, Tasmanians of the early 20th century were eager to adapt yacht design ideas from the outside world. Raised foredecks, whether original or later adaptations, were popular for sailboats in the region at the time. WoodenBoat Senior Editor Tom Jackson saw numerous examples at the 2017 Australian Wooden Boat Festival in Hobart; this slideshow supplements his article published in Currents in WB No. 256. He also noticed the frequent use of batten-seam planking, often in conjunction with lapstrake upper planks, in early Tasmania-built boats. 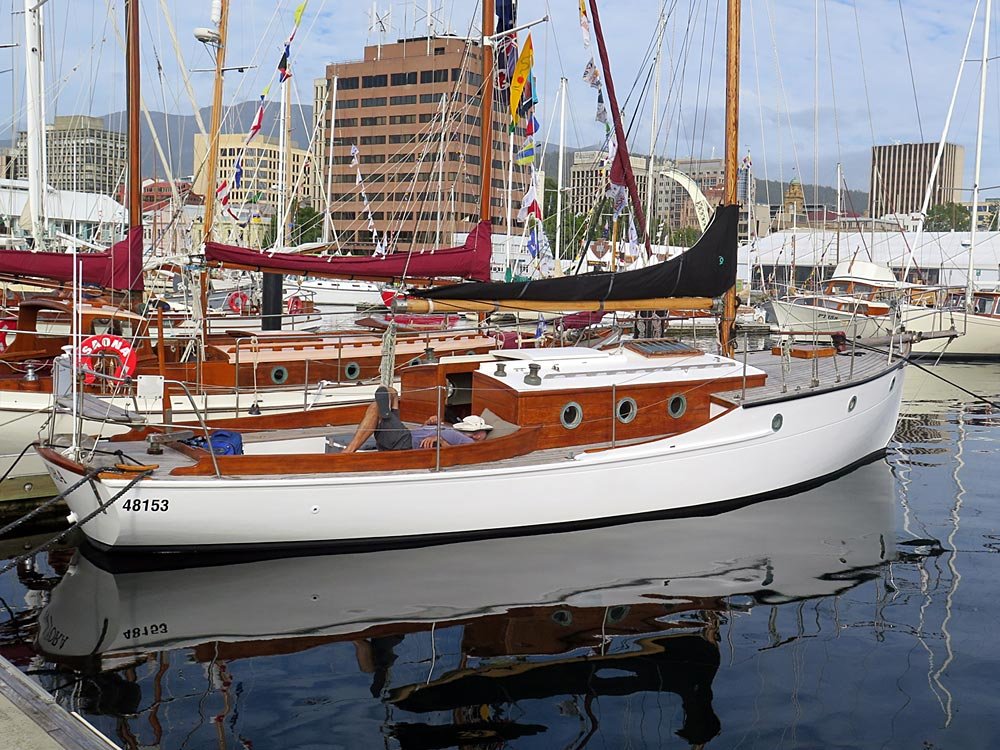 Gordon Munro, a pioneering motorsailer designer from Massachusetts, designed the 38′ LOD NYORA. She was built in 1936 in Montrose, Tasmania, by Jack Fowler. Although he built only this single boat, he used exquisite and durable local woods such as Huon pine, celery-top pine, and blue gum, which have given NYORA and many other Tasmanian boats of her period extraordinary longevity. 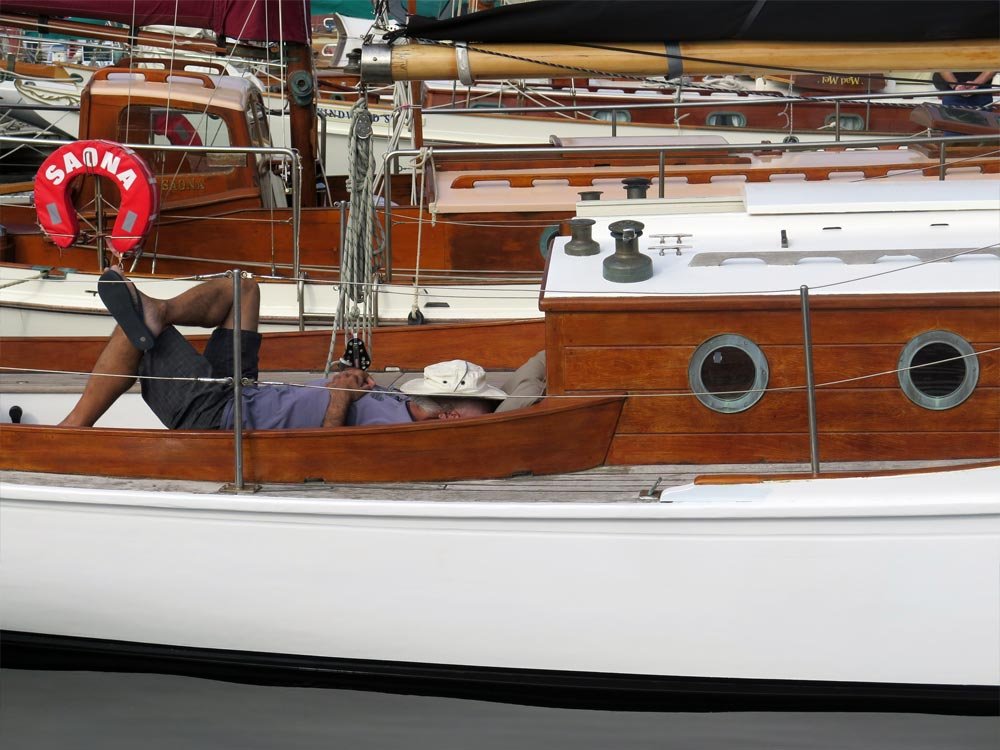 Low freeboard—except in way of the raised foredeck—in combination with comparatively low cabin structures make NYORA a handsome boat. A commodious cockpit and open decks make her a delight for cruising. Co-owner Ben Sullivan, seen here, is 6′3″ tall but has ample room to stretch out in the cockpit and has standing headroom below. NYORA has a drop-centerboard, which gives her the ability to explore even the shallows of eastern Tasmania’s scenic waterways. 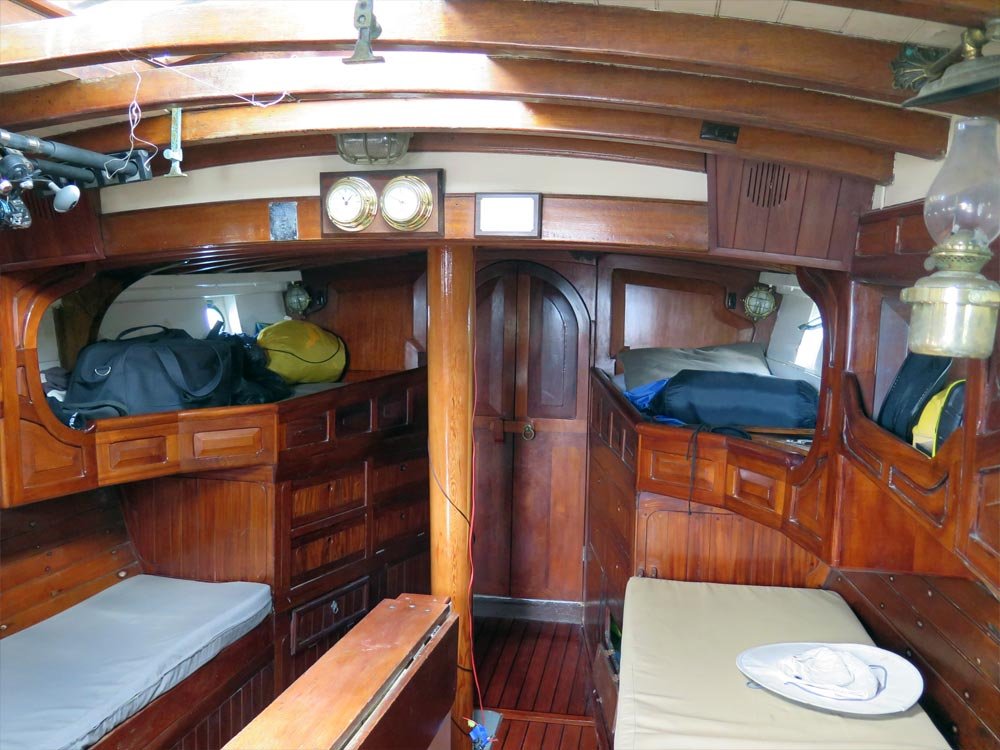 NYORA’s main saloon has outboard settees with sitting headroom. She has three standard-sized berths, one of which slides out to make a double. The two high berths forward, which are comparatively short, are not original; they were intended for an earlier cruising family’s children. The extra height provided by the raised foredeck made their installation possible. Ben Sullivan says he’s considering reconfiguring to install a private V-berth stateroom forward and perhaps moving the head, now in the forepeak, to an enclosed room aft of the bulkhead to one side. The drop-leaf table amidships is built over the centerboard trunk. A simple galley resides on the port side, aft. 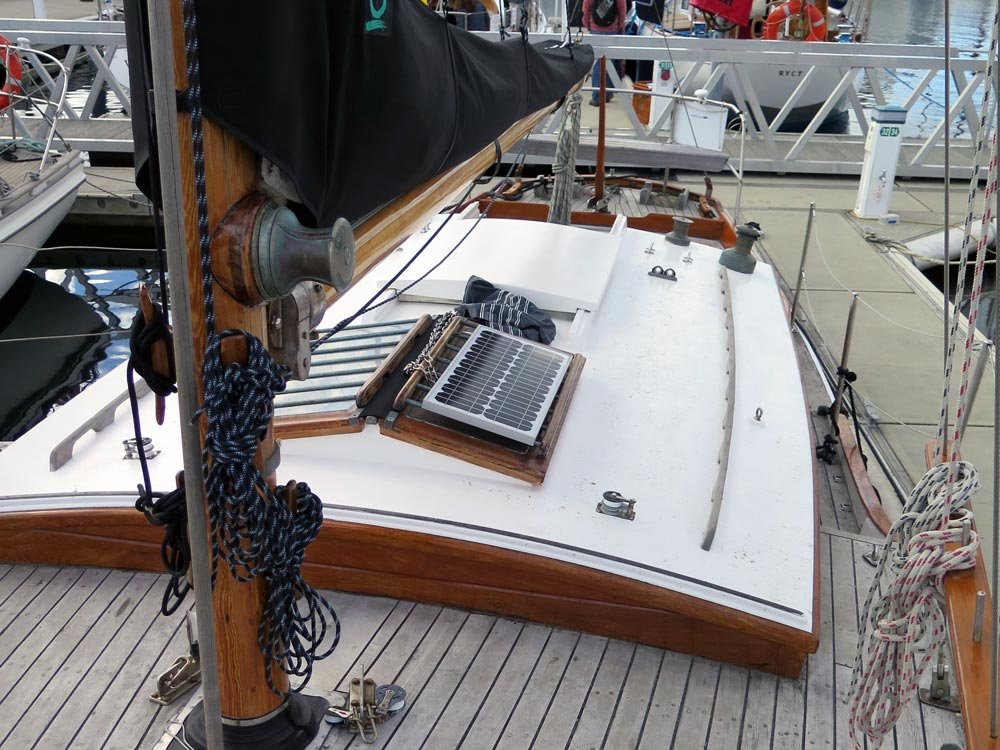 The foredeck and low cabin profile make sailhandling very simple aboard NYORA. Sullivan said the shroud pinrails have been added recently to simplify halyard organization, but no other changes have been made in the rigging. The sloop has always had a marconi mainsail with a permanent backstay. “We just cruise along,” he said. “When you get on a broad reach, she takes off—she loves it.” At anchor, the expansive foredeck comes into play once more, as a place to socialize, fish, or just enjoy the view. 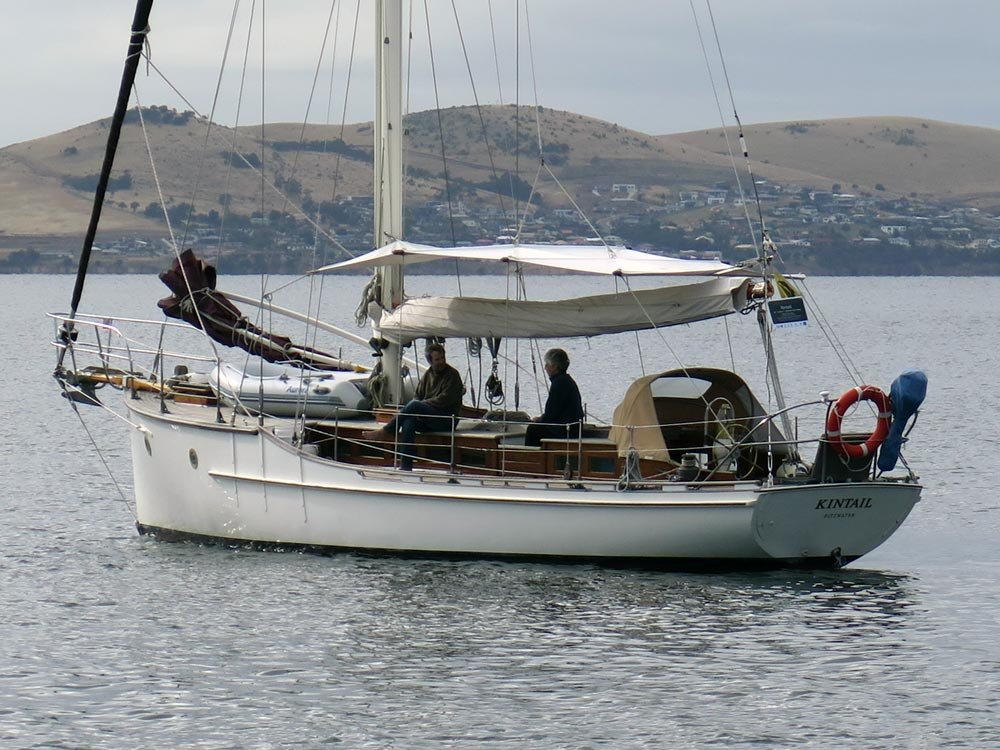 KINTAIL is another low-freeboard cruising motorsailer with a raised foredeck. This 1936 cutter is 39′ on deck and has a marconi mainsail, a self-tending wishbone-boomed staysail, and a roller-furling jib. Peter and Julie Stern of Sydney have owned her for 20 years; they cruise the eastern coast of Australia frequently, and for a decade they’ve sailed every-other-year to Hobart for the Australian Wooden Boat Festival. Walter Wilson designed her, and the Wilson Brothers yard in Cygnet, Tasmania, built her. KINTAIL’s raised foredeck is large enough to accommodate her anachronistic inflatable dinghy. With a crew that included Alec Campbell and Duncan McRae, both survivors of the brutal World War I battle of Gallipoli, she became the first privately owned yacht to circumnavigate Tasmania, and she also completed four early Sydney-Hobart races. 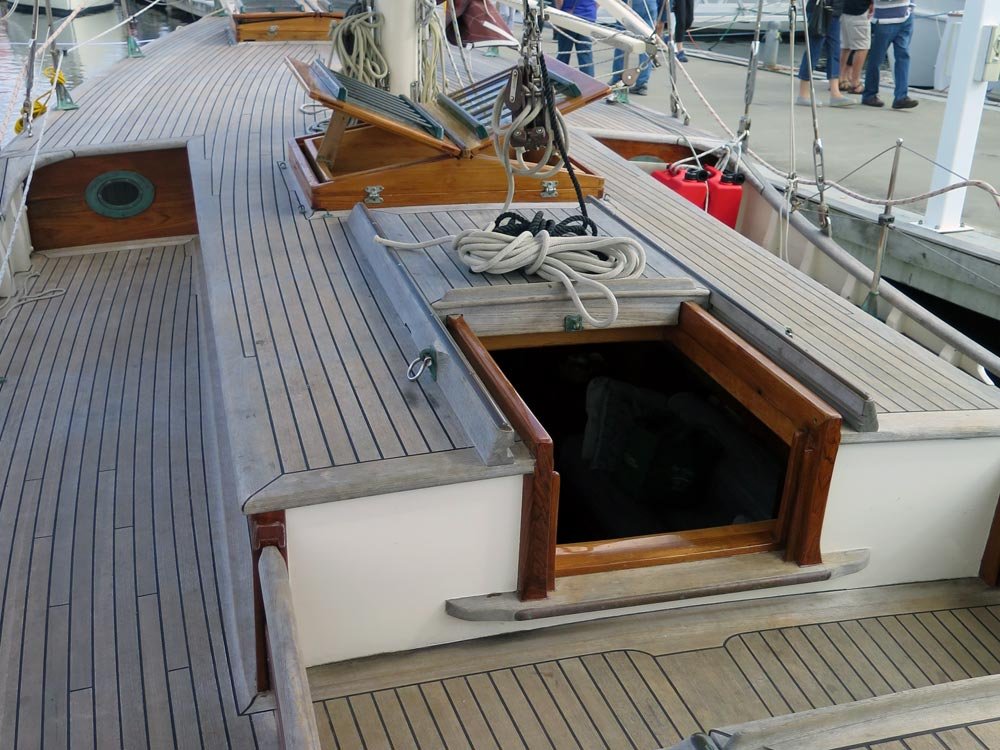 KINTAIL’s unusual deckhouse arrangement gives the yacht a broad foredeck and very wide side decks. The forward deckhouse over the main saloon is flush with the raised foredeck. The much shorter aft deckhouse covers a navigation room, which also has two berths. The comparatively low structures seem in proportion with the boat but give the feeling of a boat much larger than her 39′ length on deck. Multiple seating areas make her a natural cruising boat. Owner Peter Stern believes the raised-foredeck configuration came to Tasmania’s yachts through fish boats, for which they were often used. “It’s very practical on this boat, and it’s a great fishing platform,” he said. 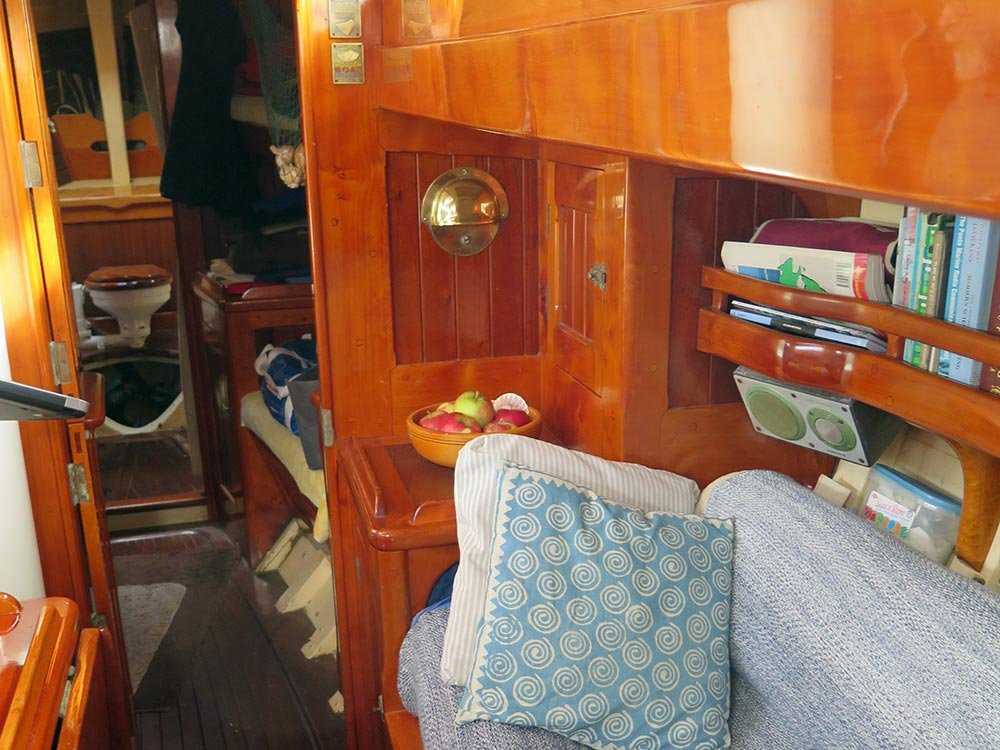 This view is of the starboard side looking forward, where KINTAIL has a comfortable settee berth with sitting headroom, living space forward under the foredeck, and a head nearly in the forepeak. Her interior is finished entirely in the much-admired Huon pine, varnished to perfection. 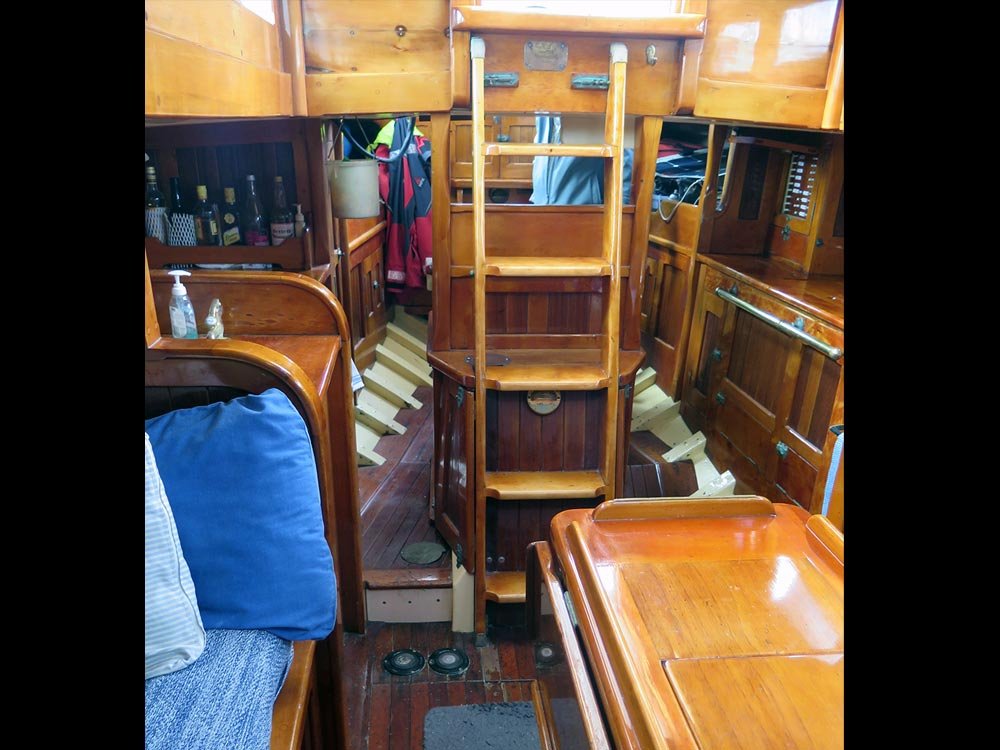 This view is looking aft, where KINTAIL shows her unusually open accommodation plan. A previous owner refitted the cabin aft of the engine box, originally designed as a navigation station. He cruised to Europe and back with his wife, four children, and a nanny—hence the need for additional berths. The gimbaled cookstove is to port, just on the other side of the half-bulkhead; a sink and additional galley space are to starboard. 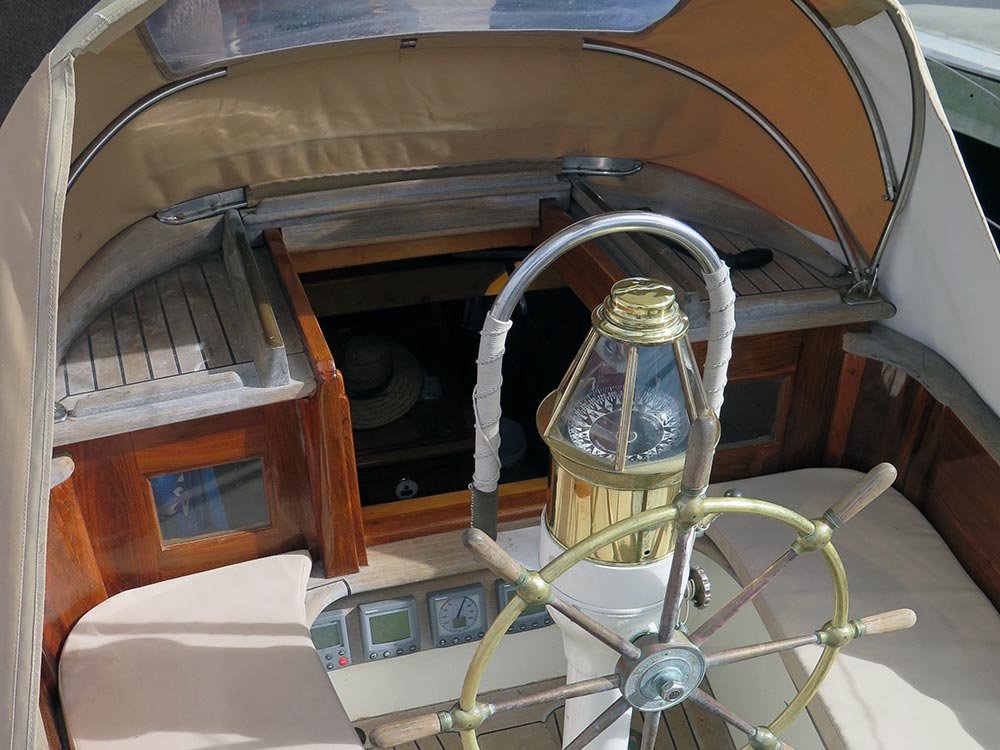 KINTAIL’s cockpit has direct access via a companionway to the aft deckhouse, allowing the navigator and helmsman to easily communicate. The modern dodger provides protection from the elements. 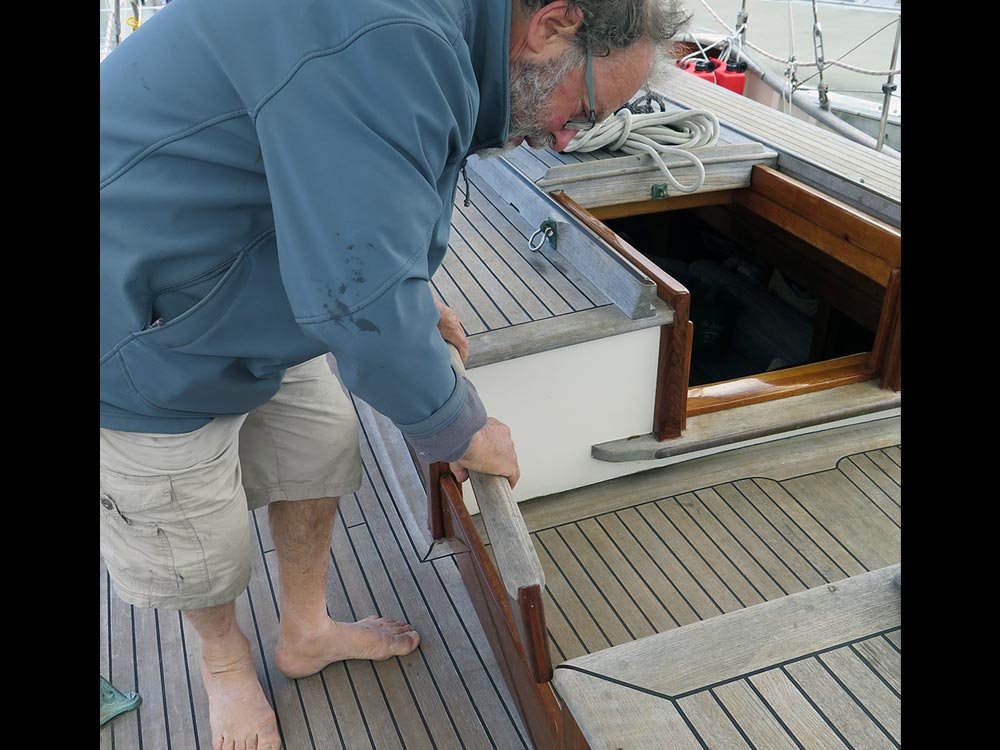 Owner Peter Stern demonstrates the removable washstrakes set up between deckhouses. Like companionway sliders, they can be removed. They protect against waves when the boat is pressed hard, but that has been a rare occurrence, Stern said. At anchor or in port, he tends to leave them where they are because they are easy to step over. 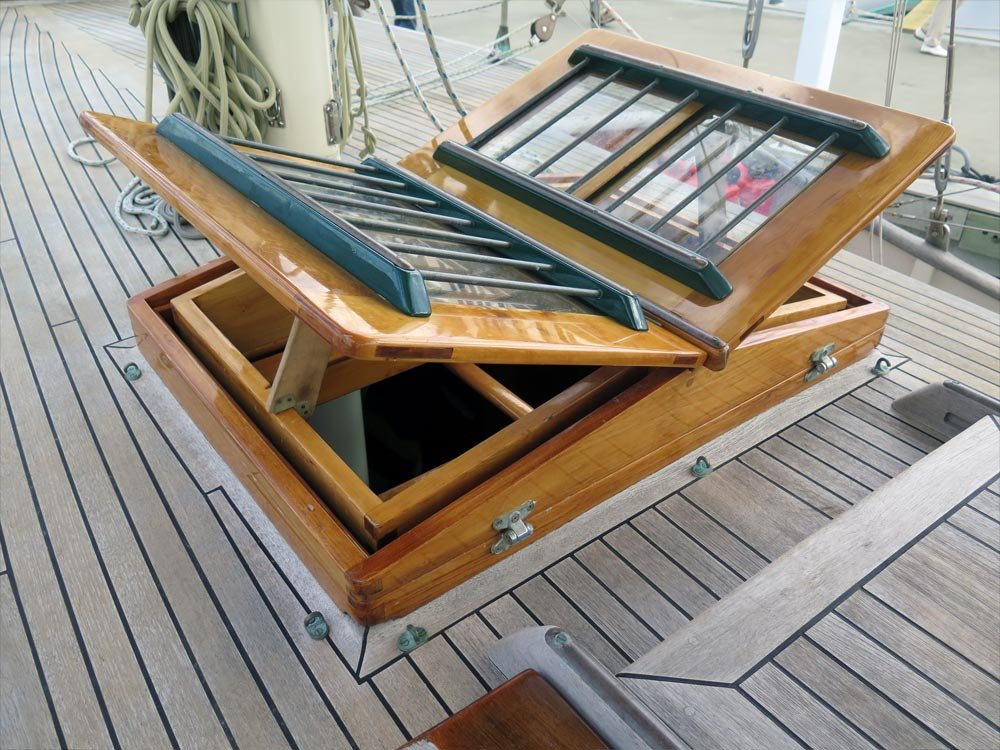 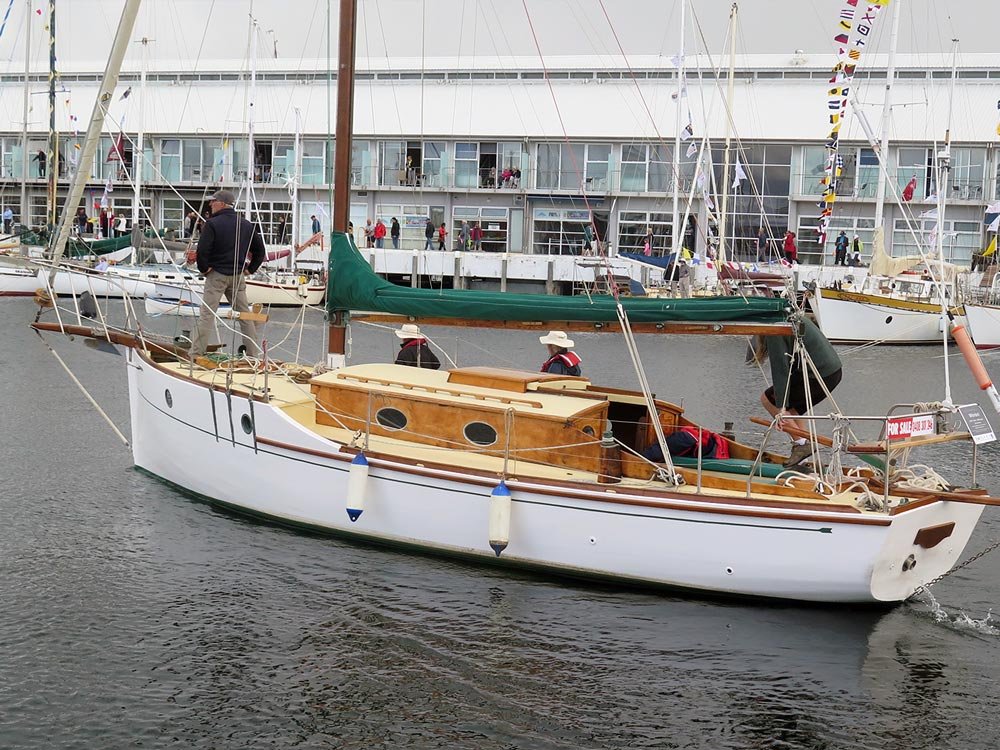 WHIMBREL, 30′10″ on deck, is another fine example of a raised-foredeck motorsailer, one that has recently been through an extensive refit. Designed and built by Fred Moore, she was launched in Tasmania in 1902. She had a varied career, including time as a fish boat fitted with a wet well. She, too, is planked in Huon pine, over a structure of blackwood. 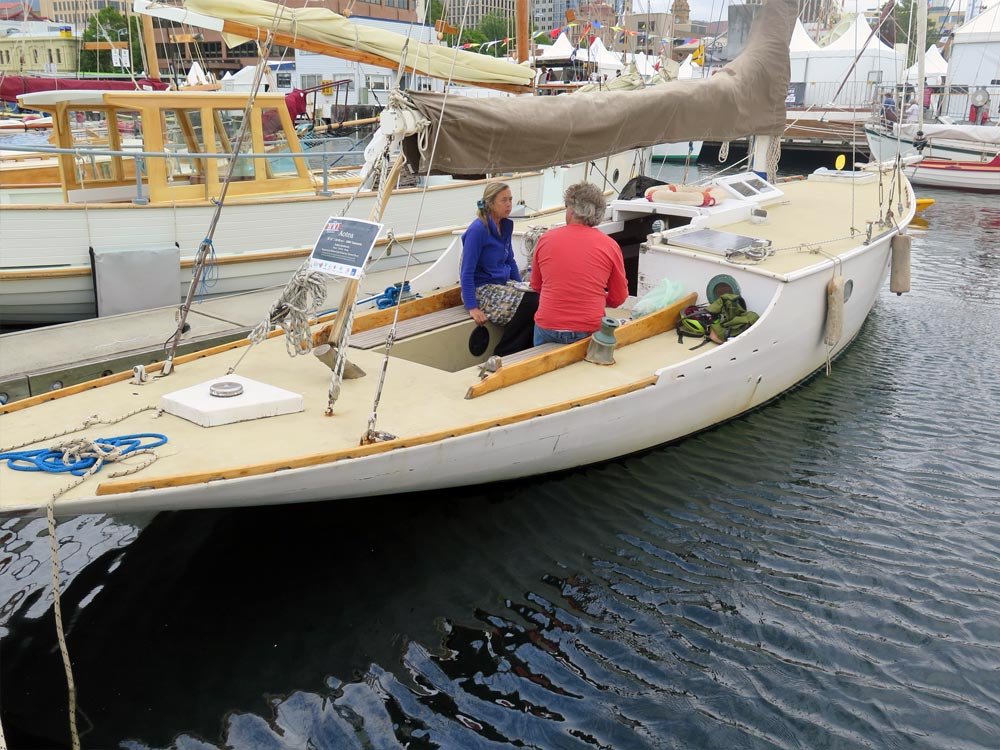 Clement Blunt built the 35′11″ AOTEA in Victoria, Australia, in 1900 to a design by William Fife III. Built largely of kauri, she was originally rigged as a lug-yawl. After arriving in Tasmania in 1907, she won the Hobart Regatta three times in a row. Her “hurricane” deck was added in the 1950s after she was considered obsolete for racing. She had been two years on the hard before being rescued by an ownership syndicate just before the 2017 festival. 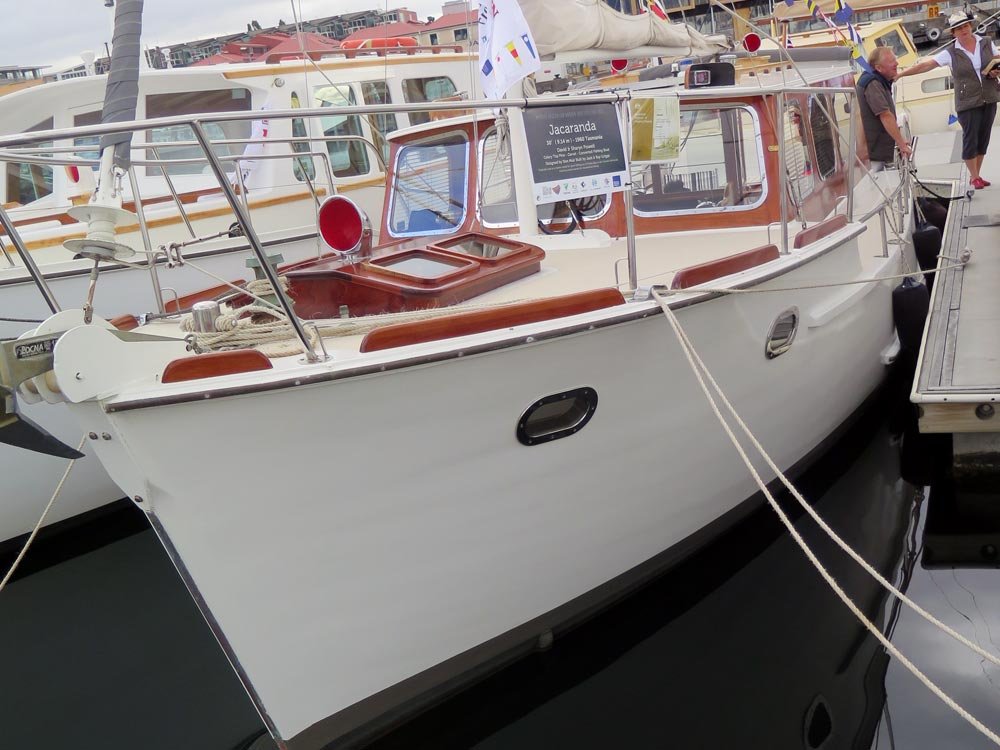 JACARANDA represents the modern generation of raised-foredeck motorsailers, having been built in 1960 by Jack and Ray Griggs to a design by Don Muir. She was originally used for couta fishing in the D’Entrecasteaux Channel and later for charter fishing out of Pirates Bay on the Tasmania Peninsula, but today she is simply used for recreational fishing. She is planked in celery-top pine. 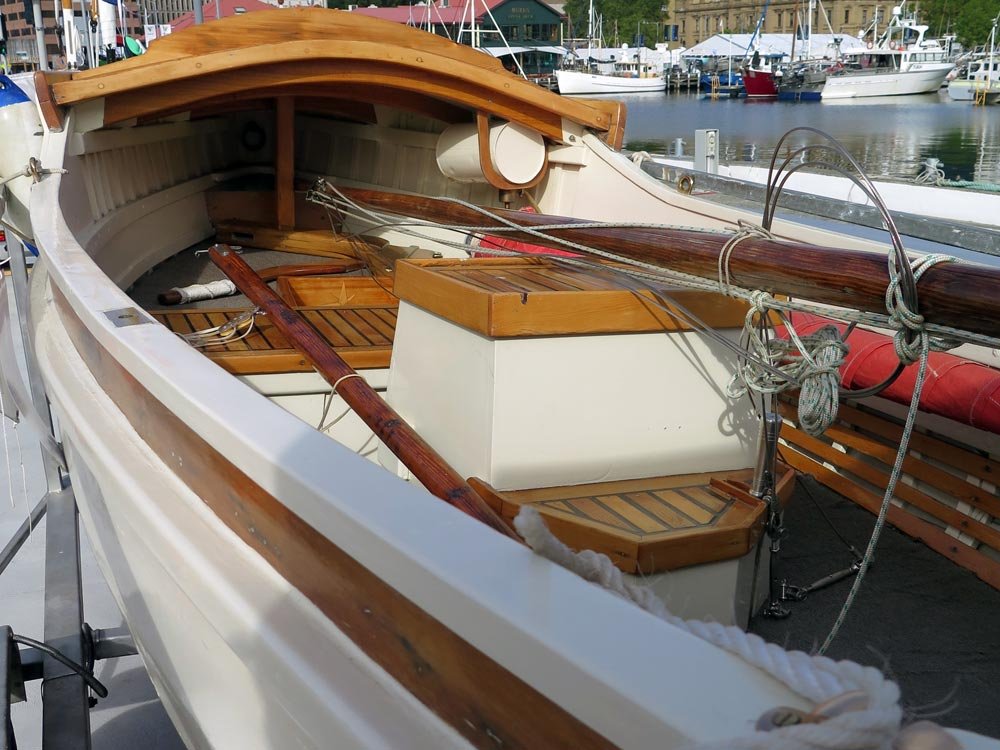 Even diminutive boats can have raised foredecks—one example being DODGY, an 18′ fishing boat built in the 1930s and reimagined as an auxiliary camp-cruising sloop. The raised foredeck provides stowage out of the weather. The engine box covers a Sydney-built 5-hp Simplex engine. 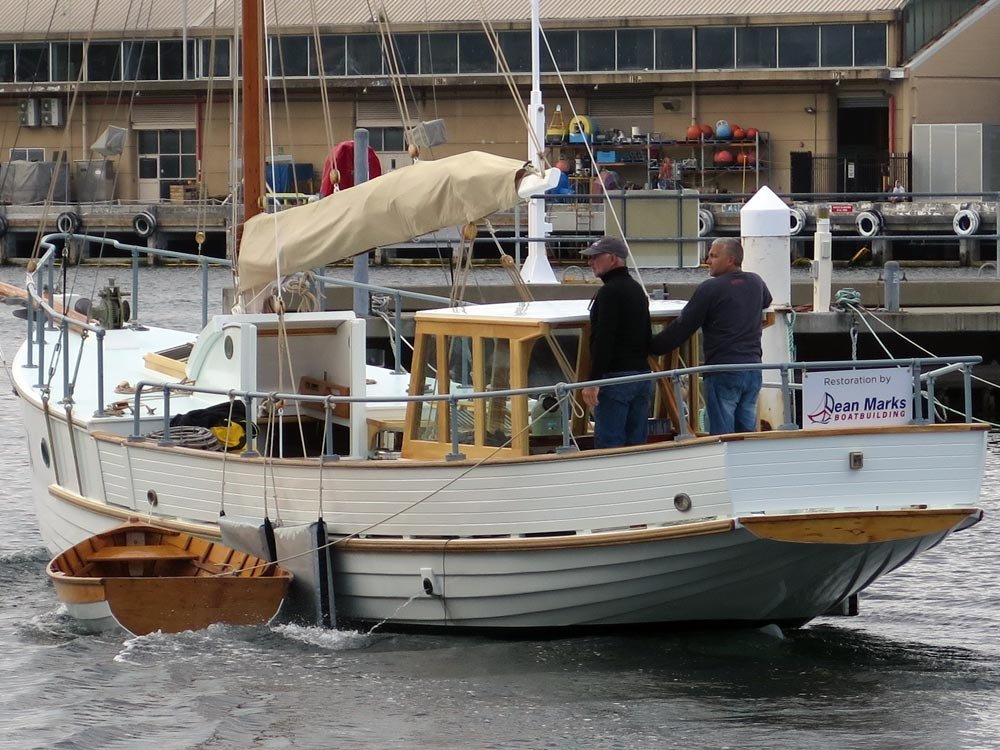 OLIVE MAY, a raised-foredeck motorsailer, was designed and built in 1880 by Thomas O’Doherty. She started her career as a coastal trader and went on to other lives, including fishing for crayfish and scallops; today, she is used for tourism outings on the Franklin River. Her hull is constructed in a hybrid manner, using lapstrake topsides in combination with batten-seam planking on her lower hull. This combination is common among historic boats in the Hobart festival fleet, although at 55′ LOA, OLIVE MAY is a large example of the type. 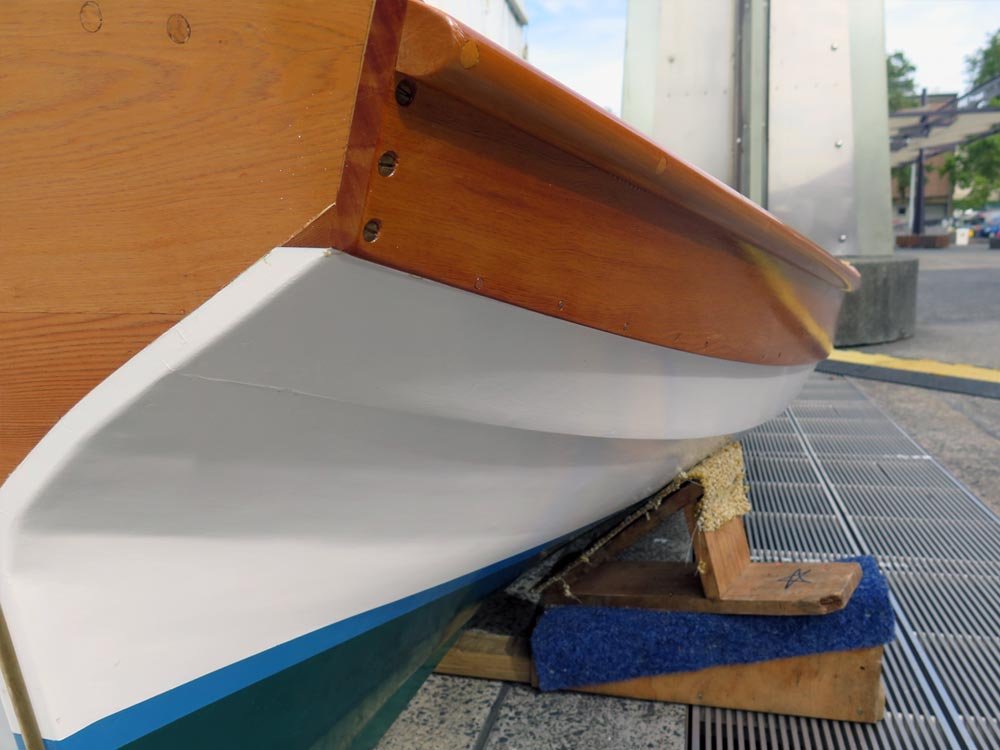 Re-envisioning an 1872 dinghy now in a museum collection in Hobart, Ned Trewartha built this reconstruction of “Mrs. Wilson’s dinghy” to high standards. The original 12′1″ dinghy, with a beam of 4′3″, was built as a wedding present for Dinah and John Wilson by Walter Paisley, formerly an inmate of the Point Puer prison for boys at Port Arthur. For this reconstruction of the boat (Trewartha’s third), the planking and frames are of Huon pine and the keel of celery-top pine. The builder described the construction as “a little ship,” a complicated and difficult boat to build, given the batten-seam carvel planked used for its shapely lower hull; only the top two strakes are lapped. 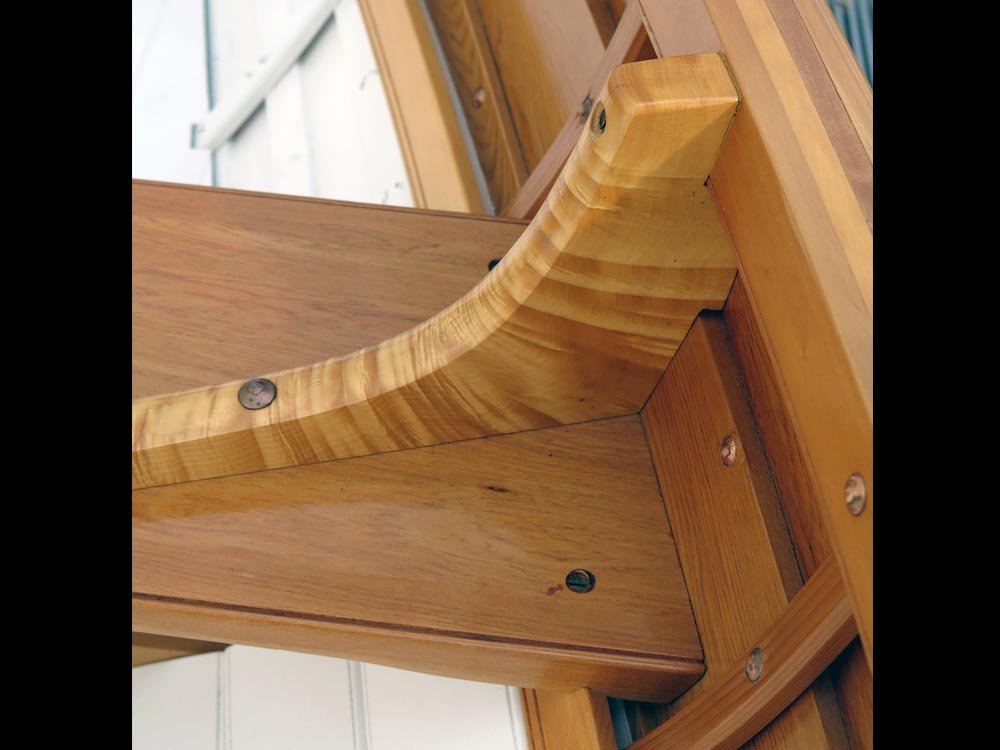 Trewartha used she-oak grown knees, fitted to the thwarts and the lapstrake planking. Above, the batten-seam lower planks, painted white, are visible. 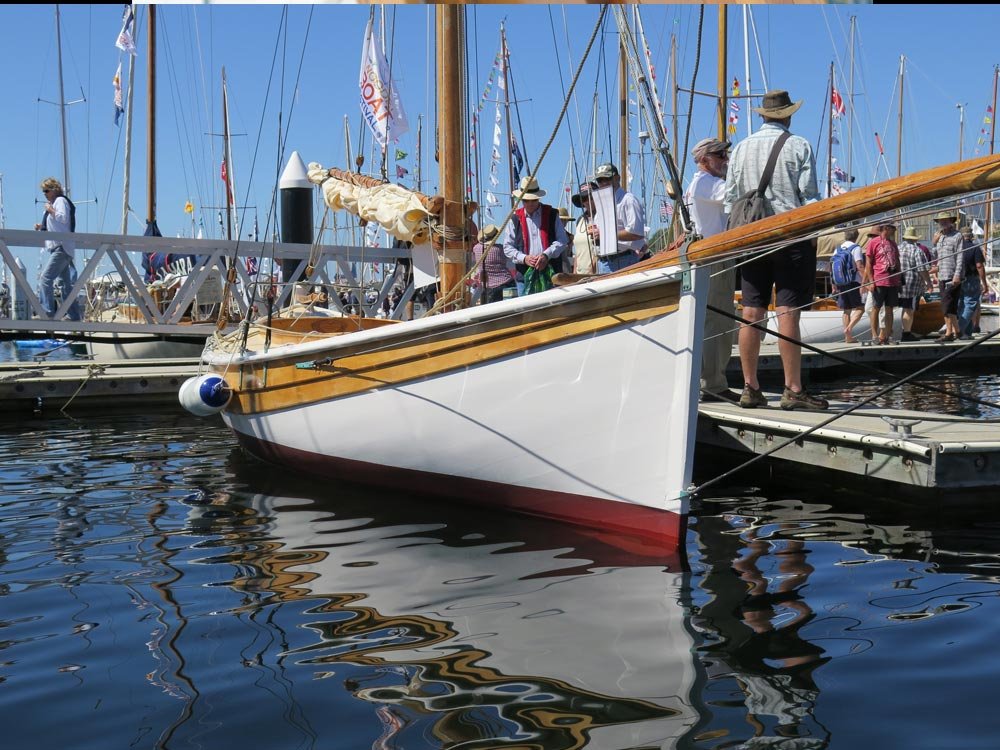 TERRA LINNA, an 1880 racing sailboat, is another example of an historic boat using batten-seam lower hull planking in combination with lapstrake planking for the top two strakes. The double-ender, designed by George Luckman and built in Tasmania, is one of the oldest surviving yachts in Australia. She was restored by the Wooden Boat Guild of Tasmania over six years and relaunched in 2012. (One of the tasks in the restoration was to remove a raised foredeck addition that had been started but never completed, after which the boat languished for years.) Peter Higgs, who helped with the restoration, is currently working on contract to the Australian National Maritime Museum to conduct a survey of the many historic boats in Tasmania. 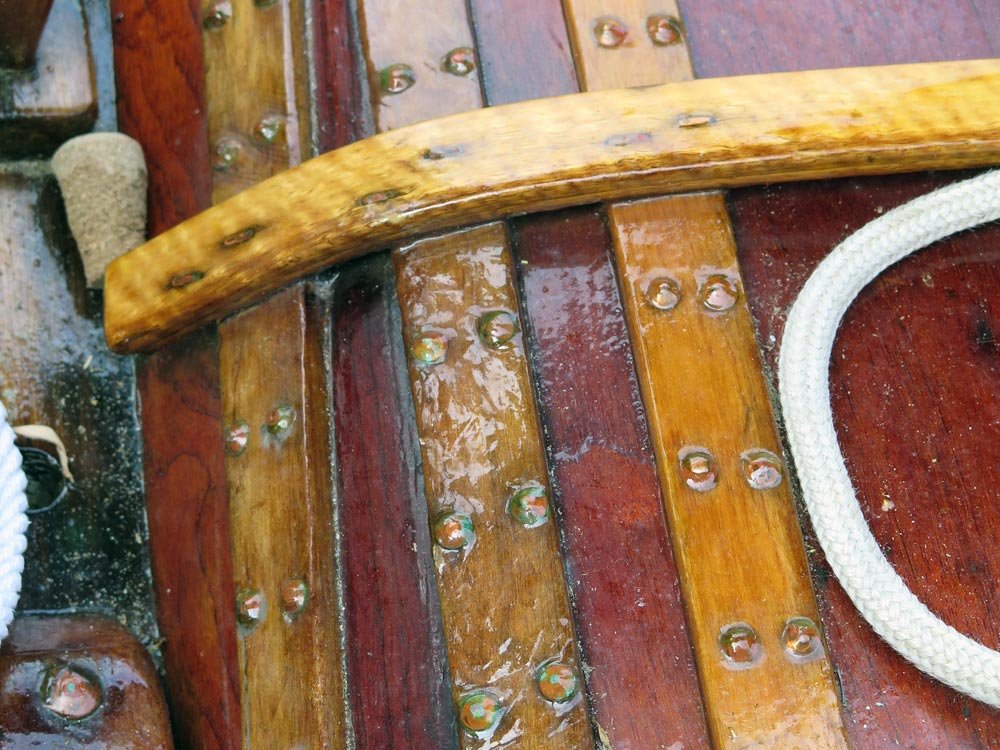 BRITANNIA, a member of the Australian 18 class (see WB No. 187), was originally built in 1919 with batten-seam construction. The original boat, now in the Australia National Maritime Museum, served as the inspiration for this reconstruction, which has now raced for 15 seasons. The new BRITANNIA, owned by Ian Smith, followed the original in every detail, including its batten-seam planking. She races with the Sydney Flying Squadron against other Australian 18 reconstructions.