The WoodenBoat Library holds a private collection of more than 6,000 maritime books, and thousands of yachting-related periodicals, some dating back to the 1800s, as well as a large number of yacht and boat plans and other resources. While we regret that we can no longer provide open public access and research services, active subscribers to WoodenBoat magazine are invited to inquire about these collections, including access to our online Library Card Catalog. Inquiries to wblibrary@woodenboat.com (please include the 9-digit subscriber number from your mailing label or 8-digit number from your renewal notice) will be answered as swiftly as we can manage. 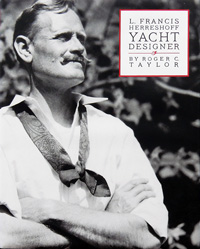 Available from the WoodenBoat Store

Francis Herreshoff lived from 1890 to 1972, and, though not prolific, he designed yachts that will always be considered classics. Beginning his career in the shadow of his famous father, Nathanael G. Herreshoff, he emerged to become a designer who would come close to the perfection of form in yacht design. Despite his exquisite designs and wise, published writings on the subject, L. Francis never achieved the popularity of a John Alden or an Olin Stephens, yet his influence on yachting, now and in the future, deserves its place alongside those leaders. It is a purpose of this book to allow that possibility by presenting evidence of Francis Herreshoff's genius for public judgment.