The Many Careers of Charles G. Davis 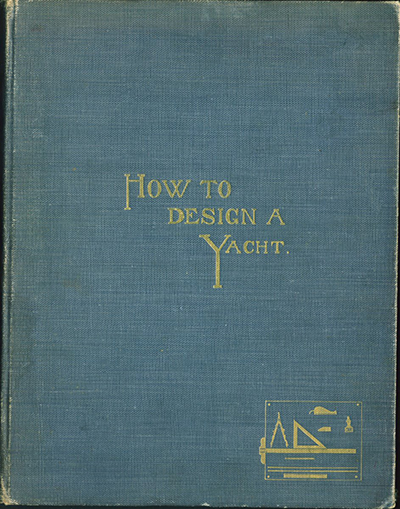 The text in this 1906 book was hand-written by Charles G. Davis. Click to view PDF

Among his other careers, Charles G. Davis was a well-known writer and illustrator for The Rudder, published from 1891 to 1977. In this book, How to Design a Yacht, published by The Rudder in 1906, Author Charles G. Davis talks about owning one sailboat, designing another, and delivering a third down the coast, and he takes a personal joy in each of the boats drawn. He loves each and every one, and shares them with us through his illustrations and hand-written text.

How to Design a Yacht is fully illustrated with Mr. Davis’s technically precise drawings and lively pen-and-ink sketches of the boats he loves. Nearly every page displays several ink drawings illustrating the text. He gives a friendly explanation of how to design a beautiful boat for yourself, how to balance a flowing sheerline and includes drawings of the relative heights of the bow and stern on different vessel types. He writes, "From the simple little plumb-ended cat-boat to the elaborate steam yacht there is a certain harmony of proportions and angles for each that can make a complete-looking, tidy little craft, or a great ugly-looking unfinished appearing one.”

Along with an extensive and useful description of how to actually draw your own set of lines plans, Davis explains how to create a table of offsets, and how to calculate your hull’s displacement and sail area. A good portion of the book is devoted to illustrating his instructional points, with line drawings, sketches, and commentary of 24 beautiful small boats.

Here is a good one, DRAGOON. 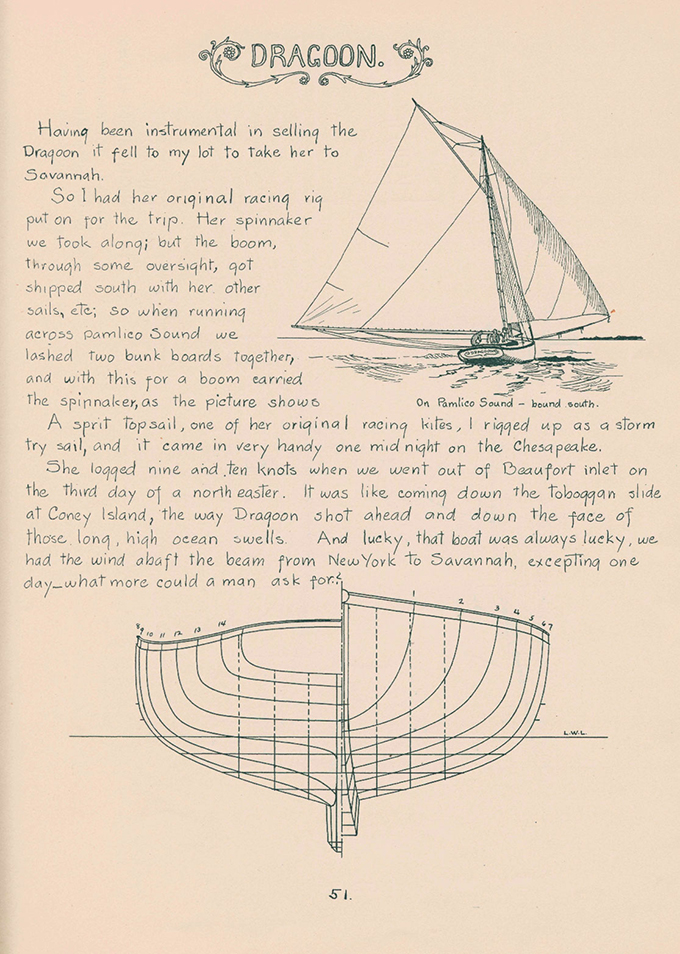 Who would not want to run down “Pamlico Sound – bound south,” with all sail boomed out, on the magnificent DRAGOON? 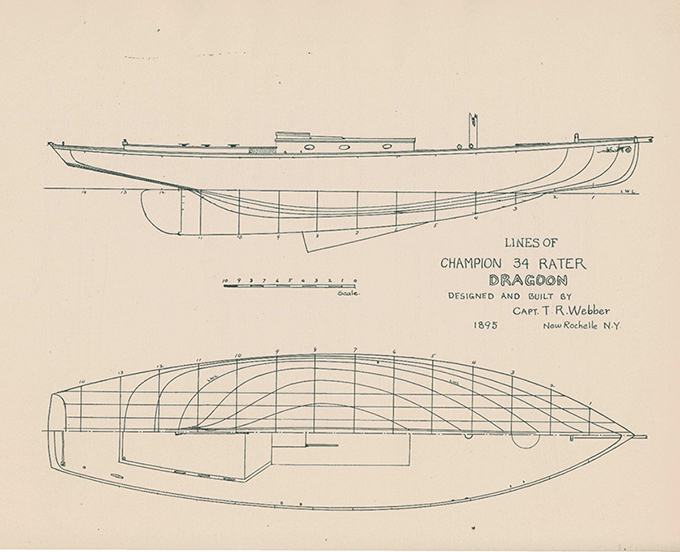 DRAGOON was a successful racing boat in Long Island Sound in the 1890s. Davis was aboard on a voyage down the Intracoastal Waterway to North Carolina. If you look carefully at the sketch above, you can see where Davis has lashed two bunk boards together to make a suitable pole to wing out the jib on the windward side. With her wide beam of almost 13′, and the very shallow draft—with the centerboard up—of only about 3½′, DRAGOON (built in 1895 for racing in Long Island Sound) would have had little trouble with the occasional shoals in Pamlico Sound, North Carolina. Davis doesn’t tell us her overall length but it must have been about 45′ on deck, with a bowsprit extending forward from that knuckle bow. He describes the boat logging nine and ten knots off Beaufort Inlet: “It was like coming down the toboggan slide at Coney Island, the way DRAGOON shot ahead and down the face of those long, high ocean swells.”

Who was Charles G. Davis?

Charles G. Davis (1870-1959) was a consummate deep-water sailor from the days of square-rigged sailing ships. In 1892, at the age of 22, he shipped aboard the bark JAMES A. WRIGHT for a voyage around Cape Horn. During his ten-month voyage, he suffered the deprivations of most sailors in those days, but despite the cold and thievery experienced during the voyage, he continued to make lively sketches of a sailor’s life at sea. His journal of that passage in 1892 was printed serially in Forest and Stream (“My First Voyage” 1908) and is held in the C.G.Davis collection at Mystic Seaport. In 2004, Captain Neal Parker rediscovered this journal and printed it in a book called Around Cape Horn – A Maritime Artist/Historian’s Account of His 1892 Voyage, published by Down East Books, Camden, Maine. This modern edition contains several sketches and a photograph of the 880-ton JAMES A. WRIGHT. After returning home to New York from that voyage, with great relief, Davis joined the staff of The Rudder, appearing on the masthead in 1898.

Charles G. Davis became the Design Editor before too long and worked at The Rudder until the First World War. His stories and illustrations for the magazine, along with his friendship with the great Thomas Fleming Day, the founding editor of The Rudder, would have made a full career right there, but Davis also served in the Navy for many years, first as a draftsman and eventually as a supervisor in the construction of wooden ships. Today Davis is best known for the model ships he built, and his authoritative instruction books for the beginning ship modeler. These are also filled with his instructive sketches, and many titles have been reprinted by Dover Publications.

Among Davis’s most significant contributions to maritime history are his drawings from his own observations of regional small craft, for example the New Orleans lugger, or the Florida sponge boat. He sketched the details of these small boats, and then made the natural next step by making models. His prolific career as a ship modelmaker gave him lasting fame, if not fortune. Many of his models are on display in the Mystic Seaport collection, (see below), the U.S. Naval Academy, and the Smithsonian.

Partial Bibliography of the Works of C.G. Davis

Ship Models by C.G. Davis in the Collection of Mystic Seaport

These are just two of the dozen or so ship models held in the collections of Mystic Seaport, and were built by Charles G. Davis in his later career. Any serious builder of ship models today will be familiar with Davis’s work and instruction books. Anyone who has read those books will have seen drawings showing many of the details visible in this un-planked model of the brig LEXINGTON. The SEA WITCH, shown below, looks very much as thef the bark JAMES A. WRIGHT looked, on which Davis sailed in 1892, and the subject of his reprinted book, Around the Horn, listed above. 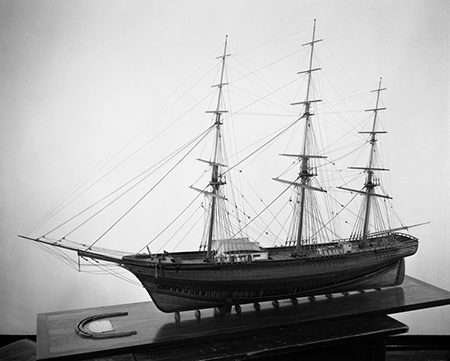