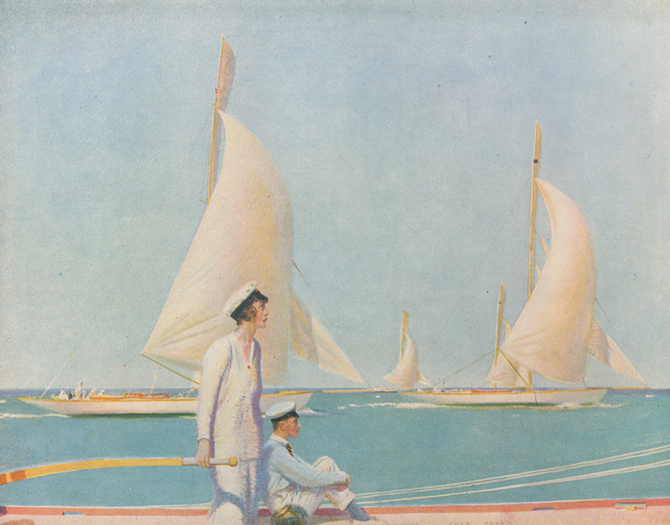 This is Plate C1 scanned from the book, Yachts and Yachting in Contemporary Art, by Brooke Heckstall-Smith (Edited by Geoffrey Holme, published The Studio Limited, London, 1920).

Who would not like to be aboard this boat steering with that great long tiller! The sky is cloudless, the breeze seems steady and brisk enough to cause a curling wave at the bow on the boat nearby, and a white wake flows off the stern in a sea of Caribbean blue. Competitors are close, all light sail set, evenly matched. A well-dressed woman is looking ahead; while an assistant is near at hand, ready to leap up at the call to trim! Or perhaps he is the tactician, whispering advice to stay low on the course.

There she is, this helmswoman, wearing a coral red brooch on the white serge jacket, captain’s hat in place, her steering hand resting easily on the fancy rope work. The title of this painting by Charles Pears is The Ladies’ Race, suggesting that the other racing yachts, shown with balloon jibs trimmed shy, and jackyard topsails set and drawing, are also under the guiding hand of a woman at the helm. This is no sunbathing shot, no toothy smile to sell shades; instead there is calm, competent engagement in the sport at the highest level.

Who was Charles Pears?

Charles Pears (1873-1958) served as an Official War Artist for the British Admiralty during the First and Second World Wars, and as a commissioned officer in the Royal Marines. Many of his illustrations were of warships at sea, under explosive skies, and later in his career, when he worked at the Transport Museum in London, he portrayed popular modes of transportation, including trains and buses around London. He was elected to be the first President of the Society of Naval Artists. 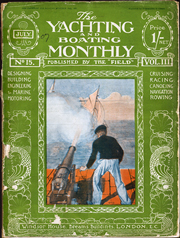 A Day on GAUNTLET (PDF)

Pears wrote regularly for The Yachting and Boating Monthly, and accompanied his articles with charming illustrations of his sailing on a variety of sailboats. In his article in the July 1907 issue, “A Day on GAUNTLET,” he describes a day of racing on the 52-footer GAUNTLET, a well-established racing boat. (The 52-footer class referred to the waterline length; the overall length could have been 70′ or more.) With some disdain, Pears points out the shortcomings of the boat’s furnishings—a plain chandelier, the absence of a piano—and of the skipper—a man of some renown who, shockingly, misjudged a tack and overstood the mark. After he's finished describing GAUNTLET, Pears turns to the big event of that race day, the race of the 23-metres WHITE HEATHER, NYRIA, and BRYNHILD. His illustration of the three under tow shows their massive size and beauty. Pears revels at the joys of the day’s hard racing, and his illustrations show his attention to the details of the deck, and his appreciation of the visual delights of sailing.

In a persuasive article in the October, 1907 issue of The Yachting and Boating Monthly, called “The ‘Single-hander,’” Pears describes his satisfaction with solo sailing in his small gaff sloop, DOROTHY, for a stretch of 15 hours. He proclaims grandly: “Single-handed cruising is the acme of sailing. In its fully developed state it is the most fascinating form of madness.”

Where to find the Works of Charles Pears

The Tate Gallery has many works by Charles Pears in its collection. In one stark illustration of a wartime scene, titled “Transport by Sea: Maintaining Export Trade,” done in 1917, a full-rigged sailing ship has been hove to. Artillery has pierced the center of the sail and the side of the hull, and flames and smoke engulf the waist and afterdeck. The crew has taken to the lifeboats; they are rowing to get clear of the burning ship, and they will likely survive, at least the fire and the sinking ship. Darkened in the foreground of the illustration, a submarine cruises by on the surface, casting her powerful searchlight on the scene, and observing the spectacle of the full-rigged ship under full sail—hove-to and sinking—in flames. The detail presented in the illustration rewards further study; a practiced eye can almost identify the submarine.

The BBC has posted an online slideshow of 83 works by Charles Pears. The slideshow includes paintings of ships in combat, convoy, and camouflage. Many of them depicting a ship under attack in the middle of a battle, which Pears must have sketched rather quickly to catch so many details of those moments.

You can see the brilliant colors and precise accuracy of the hull shapes and rigging in his marine paintings at several London museums, including the Tate Gallery, the Imperial War Museum, the National Maritime Museum, and the London Transport Museum.

Was the Helmswoman Dulcie Kinnard? 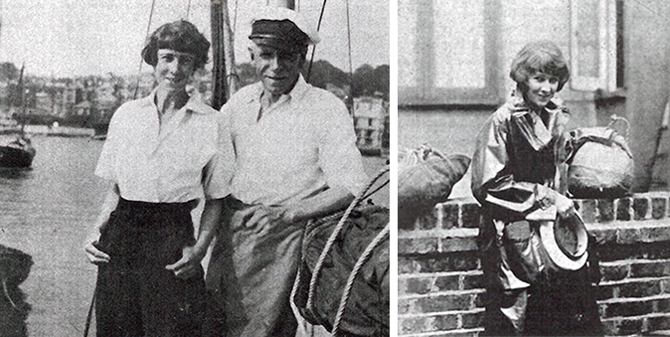 The picture on the left shows Charles Pears with his wife, Dulcie Kinnard, in Cowes aboard WANDERER. They were married in 1934. Dulcie Kinnard, shown alone in the picture on the right, was a yachting journalist who wrote successfully under the pseudonym, Peter Gerard. She was an avid British sailor and writer, who had been previously married to Maurice Griffiths, the long-time editor of the Yachting Monthly. These pictures of Dulcie Kinnard/Peter Gerard are from Dick Durban’s 1994 biography of Maurice Griffiths called The Magician of the Swatchways, a Biography of Maurice Griffiths, which was published by Yachting Monthly. She may have been the model for the helmswoman depicted in ‘The Ladies’ Race.”