Why the Starboard Frames?

Concordia #26 MARY ELLEN, formerly knows as BABE, as she appeared at an earlier time.

In 1978, a standard 39′ Concordia yawl named BABE won the MHS Division (the new Measurement Handicap System, developed in 1978 by MIT to measure and handicap racing boats, including older boats) of the renowned Newport-Bermuda Race. As one of the smallest boats ever to win that challenging 630-mile ocean race, she added an important chapter to the glory and appreciation of a much-loved class of wooden boat. Annapolis sailor, Arnie Gay, owned her then, and sailed her with his regular race crew; they raced her as hard as they knew how. They took lightweight hardware off Arnie Gay’s other boat, an IOR one-tonner named MAGIC TWANGER, including a rod headstay, an oversize winch to get the headsail up tight, extra tackle, and racing sails. It was a surprise victory under the new MHS Rule, a small old wooden boat designed for family cruising in 1939, built in 1955, beating the newer faster purpose-built ocean racing boats. Arnie writes about the Race: “We had a great time in this Race, had a great sail and we proved something. That a well-sailed old boat will go through the water just about as well as a well-sailed new boat.” *

Where is BABE now?

On the WoodenBoat Forum, you can find a long-running thread by Chuck Thompson, about rebuilding his Concordia yawl #26 on his farm in Columbia, SC. Concordia #26 is Arnie Gay’s old champion, BABE. 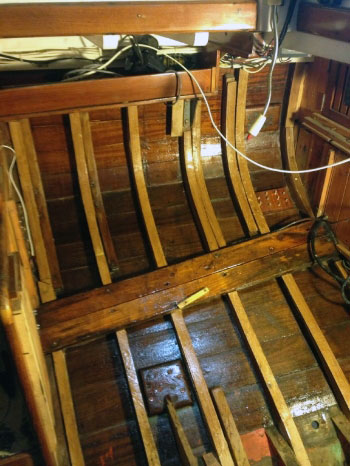 These new laminated frames are on the starboard side, replacing the cracked and sistered frames.

In the course of his four-year rebuild of the yawl (2012 to 2016), Chuck practiced his considerable boatbuilding skills and ingenuity on an intricately constructed 39′ mahogany sailboat, built in 1955 by Abeking & Rasmussen in Germany. He found several discouraging surprises, but persevered with the needed hard work with some help from the peanut gallery of experts on the WoodenBoat Forum. He was not happy to find that the boat had been severely stressed, even deformed, by hard sailing, and the over-tight rigging that had pulled on the bow and stern like a bent bow.

Among other structural issues, the frames along the starboard side were broken and not holding the planks together, and they were in much worse condition than the frames on the portside. Why would this be, he asked?

Could the answer be that the trip from Newport to Bermuda is usually a long hard beat on the starboard tack in the prevailing southwest winds? A rough slog across the boisterous Gulf Stream and the crew’s desire for the bar-taut headstay, and the press of sail that all racing sailors require… ?

BABE (Concordia #26) now named MARY ELLEN, has been rebuilt, as shown in detailed photographs on the WoodenBoat Forum. She has just been relaunched in Charleston, SC, looking great. While a practicing lawyer, Chuck completed the work on MARY ELLEN in his spare time. He and his wife, Mary Ellen, are both alumni of the WoodenBoat School. They will be cruising around home waters in an ocean-racing champion that he rebuilt himself.

In a way I feel privileged to be able to restore this boat. There’s an even deeper appreciation and understanding of the Concordias in general, and my boat in particular, that comes from restoring or being very involved in a restoration. I’ve reached mid-ship in my restoration and I know every inch of her up to that point. From seeing where damage occurred in the past, I know what to keep an eye on in the future. And I feel like an archaeologist sometimes. I see the remnants of the old wrought iron bolts. I see where the A&R shipwrights left their marks and made adjustments here and there. It’s interesting to see the repairs and small changes that have been made—some good, some clearly less successful. There are few surprises other than the amount of time it takes to do anything.

You can see all the Concordia yawls, including photos of Chuck at work on his Concordia, at http://www.concordiaboats.com/yawl.php?id=26

For more on the story of the Concordia yawls, see: