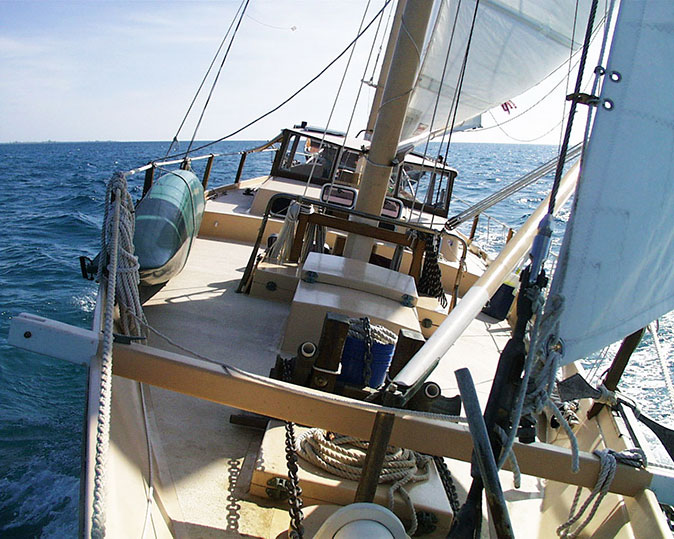 In 1999, when it looked like I might actually survive stage #4 cancer, I did two things: I bought a house in Maine, and I started construction on my fifth cruising sailboat. The house was a mistake (perhaps houses are always a mistake—at least for me). Doing these two things simultaneously was downright stupid. I spread myself too thin, both financially and energetically.

I wanted to try something very different for my fifth cruising sailboat: I had been interested for years in lorchas—a type of sailing vessel that appeared in China during the 16th century. In the excellent book Junks and Sampans of the Yangtze, by G. R. G. Worcester, there are several pages devoted to these distinctive ships. When the Portuguese first arrived in China, they were fascinated by the seagoing junks, while the Chinese were equally fascinated by the Portuguese caravels. By the early 1600’s, a new vessel-type evolved using an easternized caravel hull with a westernized version of the junk rig. The new hybrid outperformed both the traditional junk and the traditional caravel, and heavily armed with cannons, lorchas ruled the South China Sea for the following three centuries. For my lorcha I chose the name T’IEN HOU from the Chinese “Goddess of Heaven,” protector of mariners. 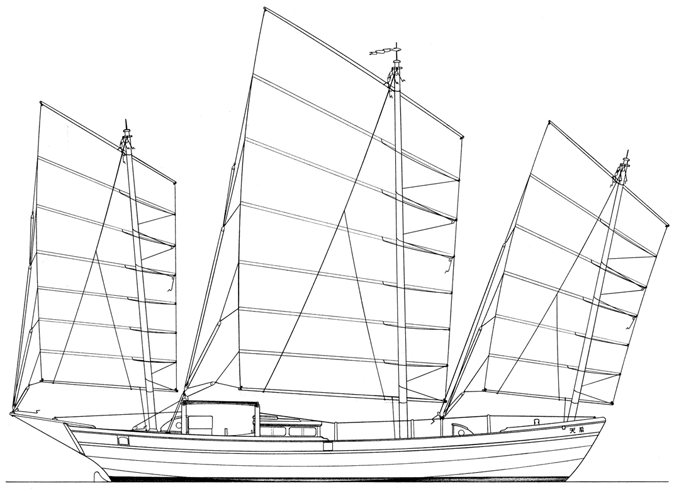 Unfortunately, I made an error of judgment in trying to marry the lorcha’s three-masted lug rig to a large Sea Bright Skiff hull. While the hull has excellent well-proven sea-keeping abilities, it is also initially tender; and the Chinese lug rig, with tremendous sail area up high, requires an extremely stiff hull.

I had been studying the Chinese rig for years, had designed a number of vessels utilizing it, but I had stuck with Blondie Hasler’s “westernized” adaptations (from Practical Junk Rig, by Hasler & McLeod)—not true Chinese rigs—which are very different in several key ways. Chinese junks had incredible controls over sail shape—many more than are used in any western rig short of the square-rigged ship. But junks also had huge crews to manage all those controls. In early 2002 I sailed T’IEN HOU to the Bahamas with first mate Jenny Nelson (see Blogs #8 & #30)… and when we returned stateside, the first thing I did was have the yard pull that foremast out! I tried a couple of alternate ideas before converting to an English-style gaff ketch rig, with sprit-mizzen—which worked perfectly. Part of what I learned is that I am really not Chinese, despite my love of things Oriental.

Regardless of the initial tenderness of the Sea Bright hull, it was powerfully self-righting, becoming increasingly stiff as it heels. I designed the hull to be built with multiple hard chines (the originals were lapstrake), using cold-molded plywood/epoxy construction. The hull included enormous integral tanks (300 gallons of water and 210 gallons of fuel), which when full, further increased the hull’s self-righting abilities. I also integrated the bulwarks into the hull construction, utilizing a hollow A-frame profile, and I incorporated foam-core decks as I had on LEOPARD (Blog #34). 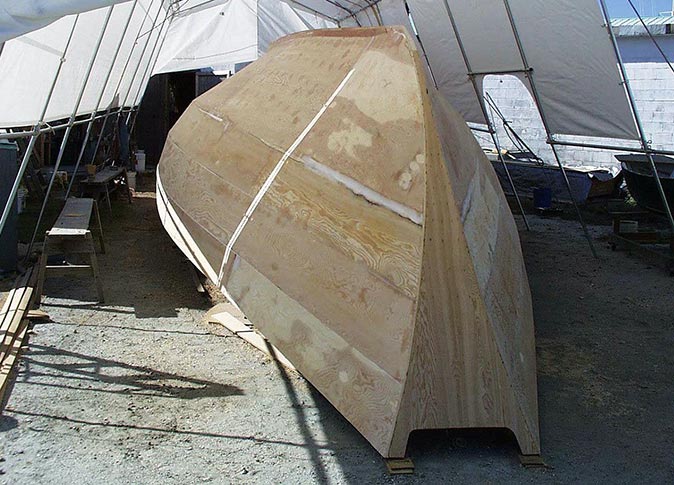 I incorporated another new design concept (for me)—a retracting wing keel, made of steel and filled with lead. With this 3,500 lb keel lowered, and tanks full, T’IEN HOU is self-righting from a nearly inverted position. The keel employs a NACA 0009 foil shape with a large delta wing below it. Combined with her hollow box keel, the vessel has very good windward ability. 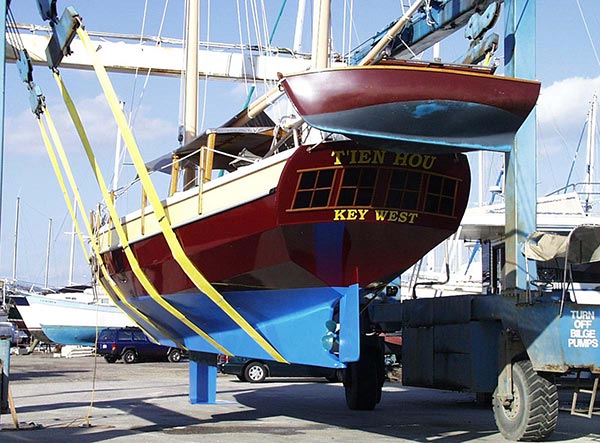 T’IEN HOU in the slings at Riverside, showing her delta-wing retracting foil-shaped keel; her tender is a 9-foot sailing Abaco Dinghy.

My dear friend Delfine (Reuel’s Angel #1) helped me build T’IEN HOU, and later sailed with me as first mate. Davina joined us during the second winter of construction, and during T’IEN HOU’s major re-fit (2004/2005), Mavis joined us, comprising the self-named boatbuilding/sailing trio Reuel’s Angels (See Blog #6).

At 50’ LOA with flush decks, T’IEN HOU is a big, comfortable live-aboard boat—indeed, she is by far the most comfortable home I have ever known, on land or on sea. She was my first boat to have a large, private master’s aft cabin, complete with stern gallery windows, plus a huge Oriental-style saloon, a cargo hold, and foc’s’le for two crew. Another excellent innovation was placing the head/shower in the cockpit—OUT of the boat’s interior! (See Blog #25.)

The trunk for the retracting wing keel divided the settee area in half, as well as separating the two huge 150 gallon water tanks. T’IEN HOU was virtually a sailing cistern! Because I dislike western seating, I created two big double berths in the saloon, with drop-leaf tables hinged on the keel trunk. With four guests sleeping in the “play-pens,” T’IEN HOU sleeps eight people. In Maine one summer, a middle-aged couple came to visit, moved into the saloon, and didn’t want to leave! 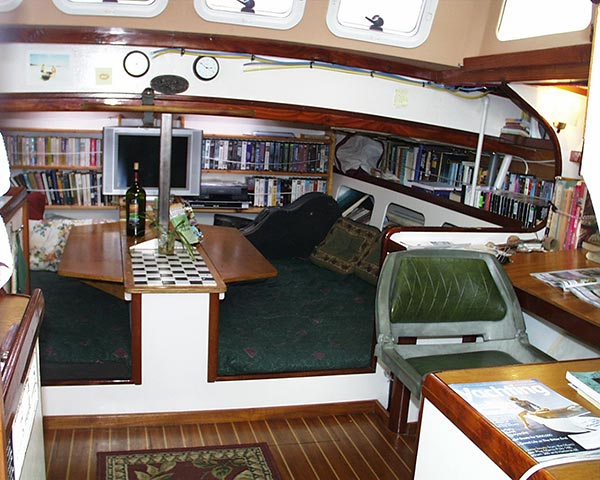 I lived on board T’IEN HOU intermittently for five years, sailing her to Maine twice, and to the Bahamas four times. The best trip by far—indeed one of the best trips of my life—was taking the Angels to the Bahamas in 2005. 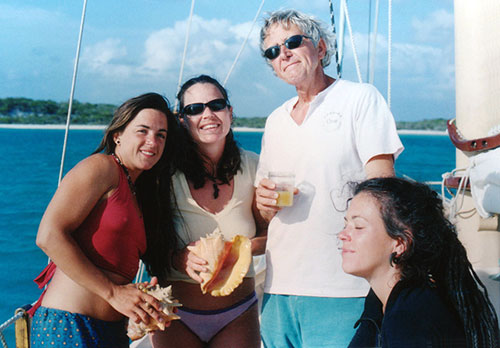 The author and Reuel’s Angels (Mavis, Davina & Delfine) in the Bahamas.

As happens to the best of us, I eventually found myself strapped for cash, and unable to sell my expensively remodeled mudfront house in Maine, I had to sell T’IEN HOU. This I was loath to do, as I would have been content to spend the rest of my life living on board. (I did eventually sell the house.) I was also coming to understand that either I needed permanent crew (a fourth wife?) or a smaller boat! And looking through my log books, it is clear to me that migrating along the entire US east coast (and much of the Intracoastal Waterway) twice a year was something I really didn’t want to do anymore.

I sold T’IEN HOU to an ocean engineer named David McGehee, who loves her and is sailing in Puerto Rica and the Virgin Islands as I write this. Damn—am I jealous! 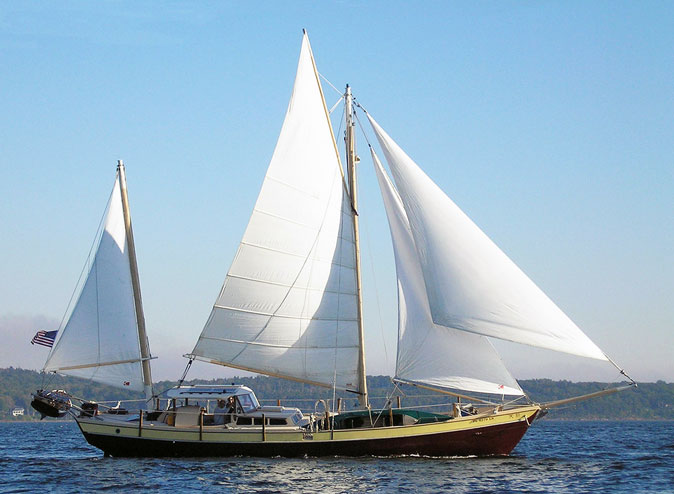 After her rig conversion, T’IEN HOU’s performance under sail was extraordinary, as was her efficiency under power (she can cruise at 8 knots burning a little over one gallon per hour). I got caught single-handing in a strong cold-front on Exuma Sound (open ocean) in the Bahamas, and sailed her on several points of sail, in 30-plus-knot winds and 8- to 10-foot seas. She handled beautifully, verifying all I had learned in studying the Sea Bright Skiffs. For single-handing, I motorsailed under stays’l and mizzen, adding the roller-furling jib tops’l to the mix when appropriate. But the big gaff mains’l was too much sail for one man alone, as I learned in Nantucket Sound in 2005 when I got slammed by an un-forecast front packing gale-force winds. I was under full sail when it hit, and I think I came as close to losing my life as I ever have! Nevertheless, with even one crewmember, T’IEN HOU is a perfect cruising home, capable of sailing anywhere in the world. 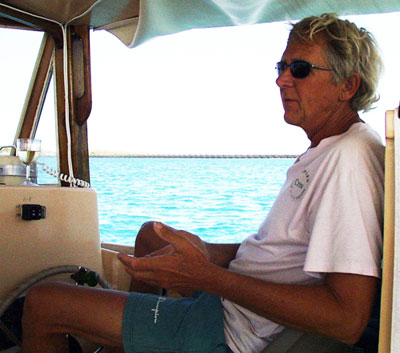 The author relaxing at the helm of T’IEN HOU in the Bahamas in 2005.