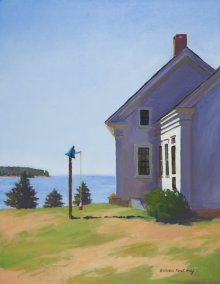 Barbara Prey Projects is pleased to celebrate their 21st season with Paintings from Quarantine: Isolation to Inspiration by celebrated artist Barbara Ernst Prey featuring two distinct series; never before seen oil paintings and newly released limited edition prints highlighting her distinct American vision. The New York Times writes, “Prey is going where icons like Rauschenberg and Warhol have gone before”. A key figure in American painting, her work is included in major public collections including The National Gallery of Art, The White House, The Brooklyn Museum, the Smithsonian American Art Museum, The Kennedy Space Center and United States Embassies worldwide. MASS MoCA commissioned Prey to paint the world’s largest known watercolor. She is appointed by the President of the United States to the National Council on the Arts, the advisory board of the National Endowment for the Arts. She was invited to paint the official White House Christmas Card and her NASA commissions were part of the Smithsonian museum traveling exhibit NASA ART/50 Years.

New print releases include Fibonacci’s Workshop (collection The National Gallery of Art), Gallantly Streaming (currently on exhibit at the U.S. Mission to the United Nations with prominent placement in the lobby) and a newly released print of her 8’ x 15’ MASS MoCA commission for their new Building 6- considered the world's largest watercolor.

Her attention to details recalls Vermeer...it’s a painter’s job to notice, and to draw out the nuance and light in what the rest of us ignore. Prey has that eye and hand ... what she makes touches the divine and has staying power. —The Boston Globe

Check back often, events are always being added.

Select a month to view