An 80th birthday present for himself 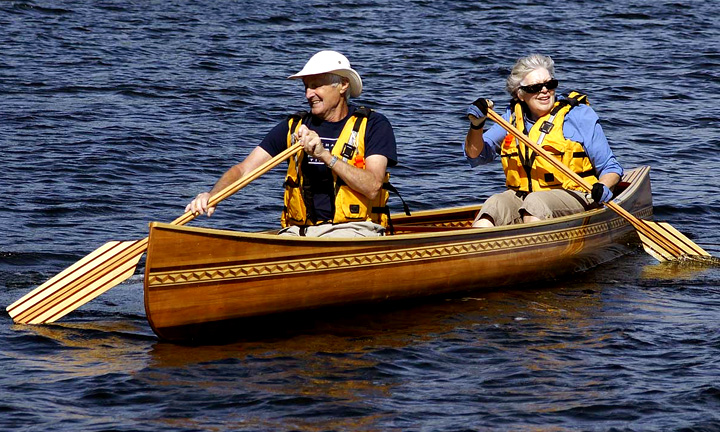 “That’s not a boat, it’s a museum piece. It’s too beautiful to put in the water.”

It spilled off tongue after tongue as visitors paced The Cowichan Bays Maritime centre’s 110 meter pier only to pause and marvel at the centres recent Small Wooden Boat Festival’s “most newsworthy boat.” and garnering a first place in the canoe category.

Arie Van Dyk’s 16-foot canoe earned the honour for the way he molded intricate layers of red and yellow cedar and a splash of mahogany into something guaranteed to catch the eye.

“Everybody was quite pleased looking at it,” the modest Cowichan Bay resident said.

Van Dyk was born in 1934 in Holland. He started his career as a woodworker as a teenager. Boatbuilding is something he has gravitated to off and on over the years. He built his first canoe 29 years ago. His “most newsworthy” triumph is his second attempt.

He did his work in his garage, a cloistered 19 by 19-foot space on the hill above the marina. He started in January and was done in May, but says he could have finished faster except the lack of heat meant the glue dried at a tedious pace.

He crafted the canoe based on the designs of Ted Moores and Steve Killings. He said the most difficult part of the process was actually the fibreglass finish; the detailed woodwork that had the crowd buzzing actually came together easily.

“It didn’t take that long. If I showed you, you’d be amazed at how simple it was.”

He has also built two kayaks, one of which was on display during the festival. He says the kayaks were actually harder to build because of the deck. Up next may be a 12-foot paddler that he hopes he can build as a group project at the Maritime Centre as a way of sharing his expertise with others. And is his most recent work of art going to stay in a showroom? Absolutely not. He said he will be taking it on its maiden voyage in the near future. “I am looking for some sweet water to launch it, maybe in the next week or so. I may even have a bottle of champagne.”

This 80 years young gentleman and his wife Jean just returned with his canoe after a two week camping trip on North Vancouver Island. In the photo Arie and Jean can be seen paddling his new birthday present to himself after a very successful new launching.