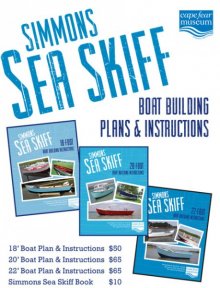 Interested in building your own boat? Cape Fear Museum in Wilmington, NC sells Simmons Sea-Skiff boat plans in 18′, 20′ and 22′.

Thomas Norwood Simmons was born in 1908 in Wilmington and lived most of his life on Myrtle Grove Sound. He was a carpenter by trade. In 1946, Norman Piner asked Simmons to build a boat for him. Simmons built the first boat of what evolved into the Sea-Skiff.

The Simmons Sea-Skiff was developed in the late 1940s and early 1950s out of a need for a lightweight boat. Its design includes an upswept bow, a semi V-bottom toward the bow with a flat bottom toward the stern, and a well for the outboard motor.

The Sea-Skiff can be launched directly into the ocean from the beach, is easily handled in ocean waves, and yet can be used in the marshes and tidal creeks because of its five-inch draft. It was an excellent combination of an oceangoing vessel, like the whaleboat, and the marsh or coastal river boat, like the shove skiff.

Cape Fear Museum Store is the only source for T.N. Simmons’ Sea-Skiff plans.