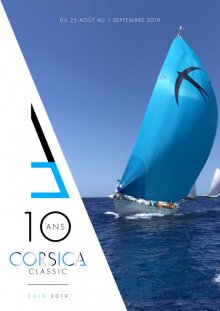 A regatta around the Isle of Beauty, combining the spirit of competition and sportsmanship, elegance and ad- venture, under the patronage of the prestigious Yacht Club of France.

The Corsica Classic is a highly exclusive sport and lifestyle event, part of a renowned tradition of stunning Mediterranean regattas for classic yachts.
All classic yachts, approved by the CIM (International Mediterranean Committee) and yachts in the ‘Esprit de tradition’ class, approved by the IRC in 2019, are eligible to enter the race which is part of the official circuit organised by the CIM and French Association of Classic Yachts (AFYT).

Over the past 9 years the Corsica Classic has become a not-to-be-missed event on the Mediterranean sport and lifestyle calendar and remains the only classic regatta sailing around Corsica, and the only one in the in ternational circuit to be set in august, just before the Monaco Classic Week, the Régates Royales in Cannes and the famous Voiles de Saint-Tropez.

The regatta is under the patronage of the Yacht Club of France since 2014, a mark of great prestige. The YCF will be giving a very special Prize at the closing ceremony to the most Fairplay Sailing Yacht. Created in 1867 by Napoleon III, the highest sailing institution in France has had very prestigious members, such as the polar explorer Charcot, Jules Verne or Eric Tabarly.

More than 90 classic yachts, some of the most beautiful in the world, have participated in the Corsica Classic in 9 editions. Authentic floating works of art, always ready to fight on the water, even at more than 80 years old ... This year, the casting will be historic: The faithful participants, such as SY Vis- tona, great Italian favorite in his class which totals seven Corsica Classic to his credit, SY Morwenna, SY Saint- Christopher (winner of the Voile de Saint-Tropez last year in his class), SY Houbonne IV or SY Eileen, big favorite in the Epoque Marconi class. Among the new participants: an Australian sailboat, SY Windjammer - which crosses half of the globe to join the race - and a second crew of the Kangaroo country, gathered on SY Tiphane II. The Spirit of Tradition class (recently built yachts with a vintage look) is still growing this year with 11 par- ticipants, which announces a great nautical battle between the experienced (SY Mr Fips, SY Scherzo) and the newcomers: Among them, SY Tintagel, affiliated with the Royal Swedish Yacht Club, the oldest in Europe, created in 1830.

Bonifacio, Lavezzi Islands, Saint-Cyprien bay, Bavella, Sari-Solenzara, Bastia, Macinaggio, Saint-Flo- rent : names that conjure up visions of the Isle of Beauty; iconic landmarks dotted along the route of this se- ven-day race. Each day, the yachts will follow a coastal route of around 20 miles, a distance that will take at least 2 1⁄2 hours to navigate on the shortest days, and up to 8 hours on the longest. Arriving at their overnight moorings, competitors will find exceptional port services and stunning backdrops.

With its course between Bonifacio and Saint-Florent, the regatta will stop in 7 ports along Corsican shores. The event is actively supported by Corsican entrepreneurs such as Gloria Maris (fish), winegrowers (Granajolo, Clos Signadore, Sea Wine ImaJYne), Pietra (breweries), Mattei drinks (cocktails and juices), Château Nasica (olive oil), ice-cream master Pierre Geronimi, restaurants (Pozzo di Mastri, Caffe de Flore 1755, L’Auberge du Pêcheur) and hotels along with the major Corsican authorities. All these actors of the island will be put forward to make discover their know-how and the excellence of their products, Made in Corsica. This year, the regatta is teaming up with Breast Cancer Associations and will participate in a sea cleaning operation in the Med.

Check back often, events are always being added.

Select a month to view