A young Chesapeake waterman launches a boat—and a career

Text and photographs by Jay Fleming 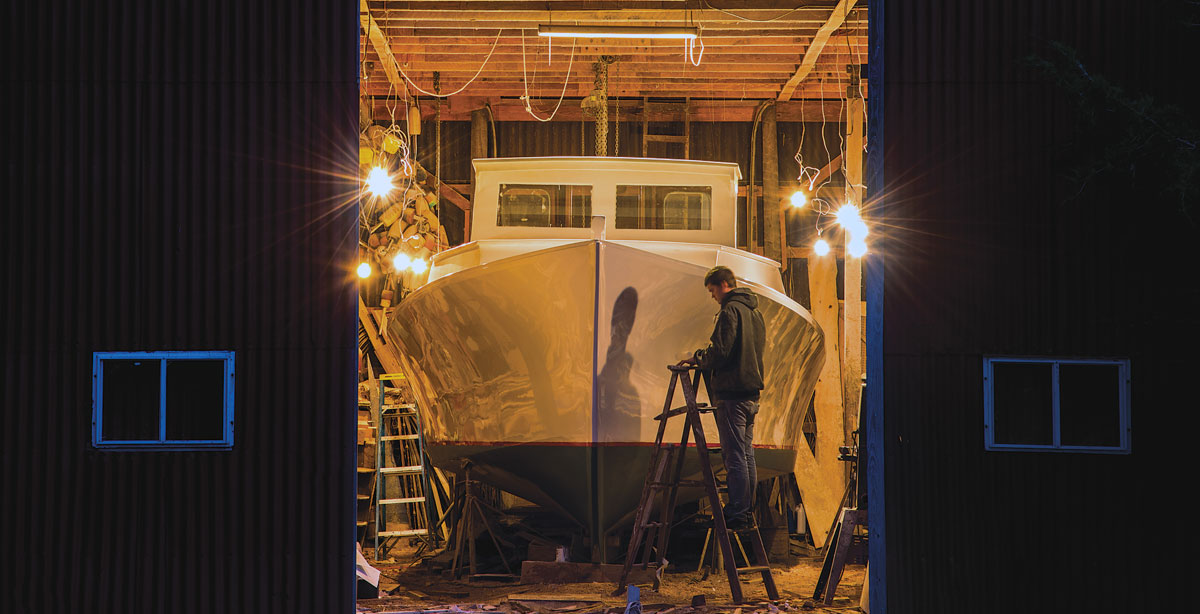 The small towns dotting the marshes of lower Dorchester County, Maryland, were once home to a vibrant seafood industry, as well as some of Chesapeake Bay’s legendary boatbuilders—O’Neill Jones, Bronza Parks, and Paul Jones among them. They supplied watermen up and down the Bay with beautifully handcrafted wooden skipjacks and Chesapeake deadrise-style workboats; in the process, they established the lower Dorchester County peninsula as a boatbuilding center. To this day, wooden boats are still being built in this area of Maryland’s eastern shore, albeit in greatly diminished numbers, with the same classical craftsmanship that has distinguished the area for generations.

The construction of a traditional Chesapeake Bay deadrise-style workboat begins upside-down. The rabbeted stem is bolted to the keelson with a knee and threaded rod. The stemhead is then placed in a barrel buried in the shed’s dirt floor, allowing the hull to be lowered in order to plank the bottom. After LAST ONE’s bottom was planked, Millard turned the hull upright, using chains and pulleys. He then fitted the heavy sawn frames by notching their heels to fit the chine logs, as he is doing here. The materials for LAST ONE were relatively inexpensive, as Millard had leftover white cedar, white oak, and cypress from other boats he’d worked on in the 1990s. The keelson, a 36′-long piece of loblolly pine, was sourced from a lumberyard in nearby Golden Hill that had gone out of business.

Millard Littlepage first came to Dorchester County in 1982. He purchased a home in Crocheron, a small town near Bishops Head, at the tip of the peninsula, and quickly became fascinated with the watermen’s way of life and with boatbuilding. He jumped at the opportunity to volunteer with Roger Bloodsworth, a full-time boatbuilder who crabbed and worked odd jobs on the side. Like most people in the area, Roger did whatever he could to make a living. He was happy to have Millard’s help, and Millard was happy to have an introduction to boatbuilding.

In 1984, after his two-year apprenticeship with Roger, Millard was commissioned by a local waterman to build his first boat on his own. Since he was then working full time for the Maryland Motor Vehicle Administration, the boat took him a year-and-a-half to finish.

After that first boat was launched, Millard continued to build boats in his spare time, and in 2013, nearly 30 years and six boats later, he began his magnum opus: a 39′6″ Chesapeake “deadrise” boat that he would build with, and for, his son Lucas, who upon graduating from high school had begun to work on the water.

Lucas had learned to crab with his father and worked as a deckhand on local workboats; his father jokes, “It’s my fault that Lucas wanted to work on the water.” Lucas’s fascination for harvesting the Bay led him to a Waterman’s Apprenticeship Program designed to encourage young people to enter the aging workforce of watermen. Millard began building the new boat that fall; he named it LAST ONE, because he reckons it will be his final wooden boat—a gift to his son as he begins his career as an independent waterman.

As the Chesapeake Bay environment changes, so does the seafood industry that depends upon it. Of the eight seafood-packing houses that lined the shores of lower Dorchester County when Millard arrived in 1982, all but one have gone out of business. The old builders passed away, and modern-day watermen have mostly transitioned to fiberglass boats. While LAST ONE is Millard’s final boat, the name is also representative of the bigger picture: of the 10 to 12 wooden boat builders who were working in the 1980s, Millard is, in fact, the last one. This dramatic change in an area that he holds so close to his heart is a sad reality, but he says, “It is rewarding to know that my boats are still out there every day and that when I am gone, my legacy and work will live on through them.”

The building of LAST ONE was a joint project between the father and a son, a once-in-a-lifetime opportunity for them to work together. “Working with my dad on the boat has provided me with an experience and an education that I will be able to cherish for the rest of my life,” said Lucas. 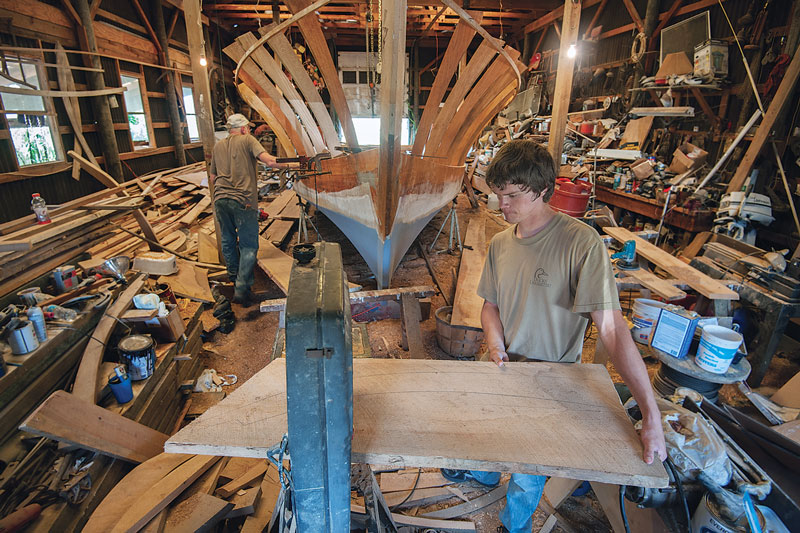 Lucas cuts a frame from a white oak board while Millard eyes the placement of another frame. The initial progress was slow, as Millard was still working full time for the State of Maryland plus a second job to pay for his children’s education. His work on LAST ONE was limited to, at most, four hours a day during the week, and six to eight hours a day when he was off from his two other jobs. Once the boat was flipped right-side up, they worked from the bottom up, building everything without plans. “We did everything the traditional way, just like Roger and the other builders did. It was very hard to get it exactly right when you are relying on the naked eye,” said Millard. 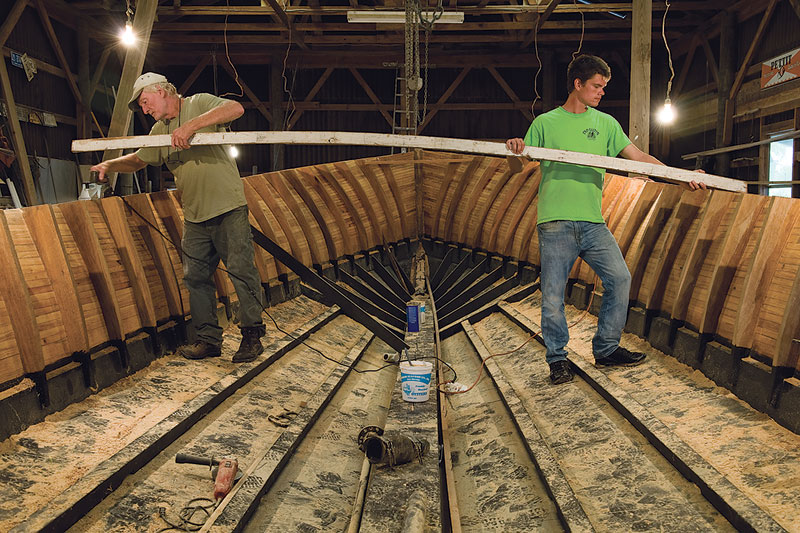 After they cut the sheer, the builders beveled its edge with an electric plane, using a deck-crown pattern to guide the work. 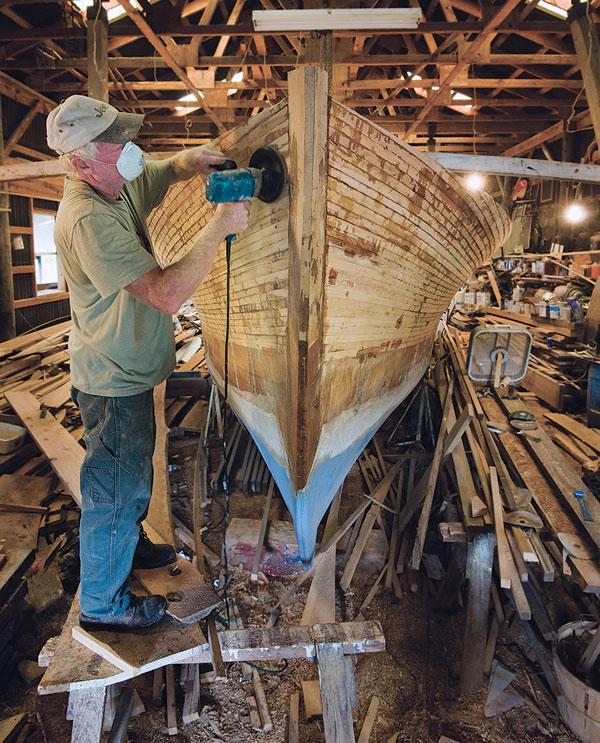 The topsides are strip-planked with 1¼″ × 1¼″ white cedar strips, which are glued together with epoxy, edge-nailed to the strip below, and face-nailed into the frames. Once all of the planks had been hung, Millard used a batten and his experienced eye to mark the sheerline, which the builders cut using a circular saw. He then sanded the planked-up hull smooth. 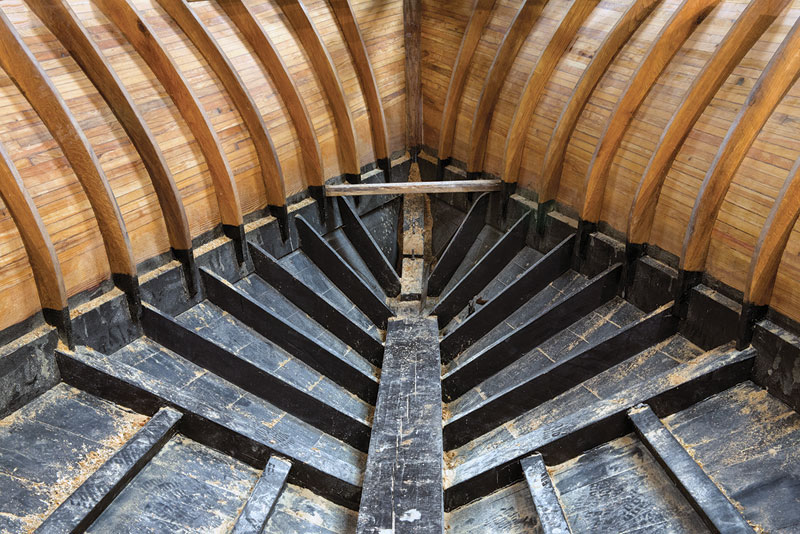 Most of the boat’s bottom is cross-planked, but the planking transitions to fore-and-aft orientation at the bow. Dorchester County builders learned this technique while building rescue boats for the Army during World War II at Cambridge (Maryland) Shipbuilders. 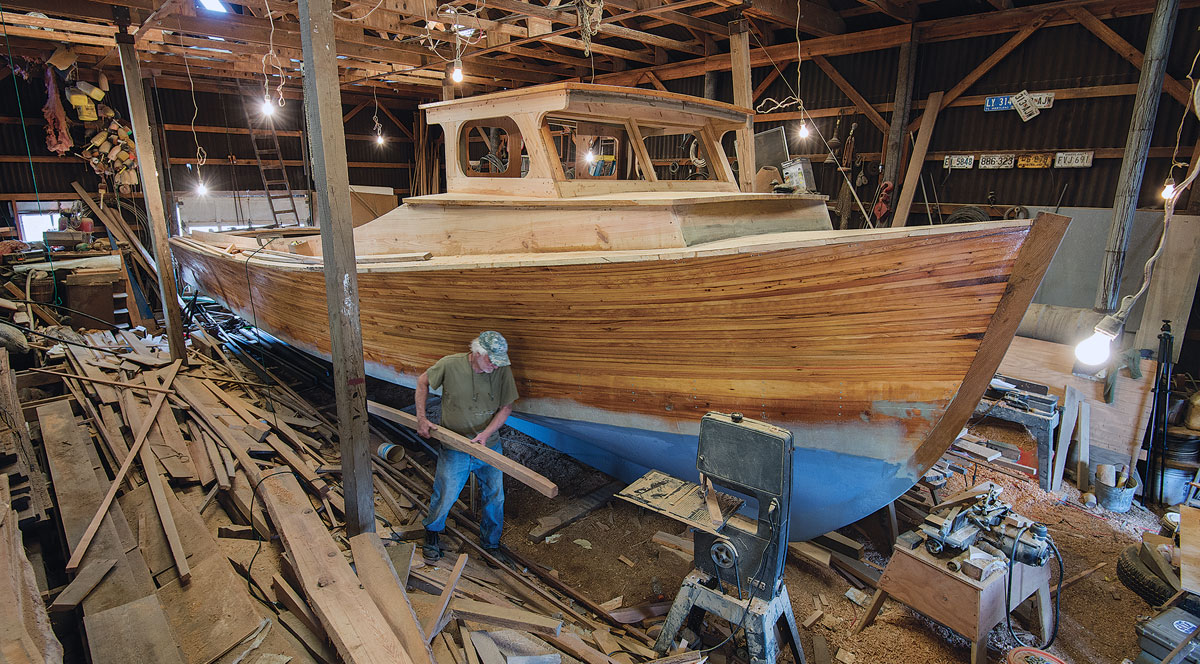 When LAST ONE was in its initial stages of construction, and upside down, Millard and Lucas applied two layers of fiberglass set in epoxy. After the topsides and superstructure were finished, Millard, with the help of other local watermen, fiberglassed the remainder of the boat. LAST ONE is the first boat Millard has sheathed in this manner. “The fiberglassing took a lot of work, but my hope is that it will increase the longevity of the boat and minimize the maintenance. I want this boat to last Lucas a lifetime,” he said. 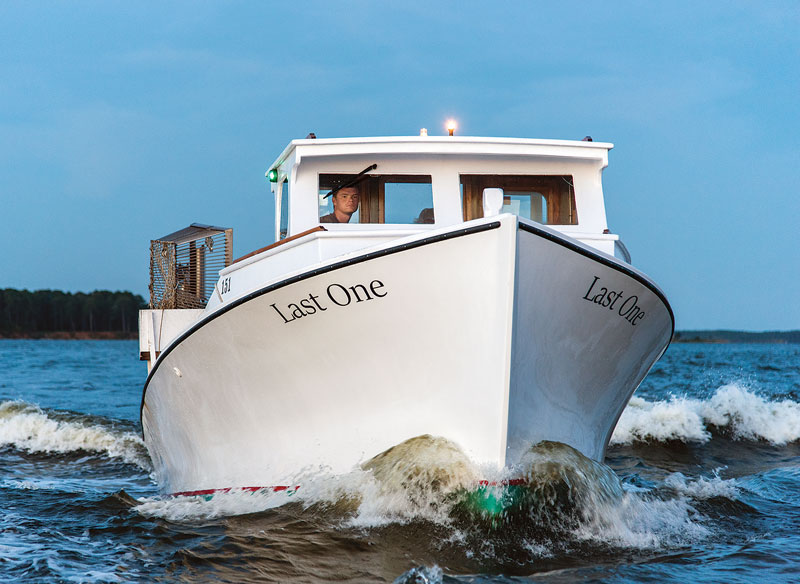 Lucas runs LAST ONE to the crabbing grounds in Fishing Bay, which is fed by the Transquaking and Blackwater rivers and empties into Tangier Sound. The boat’s high bow was designed to deal with the often-choppy waters here, minimizing the number of days that were “not fit to work.” These waters are rich in blue crabs and eastern oysters. 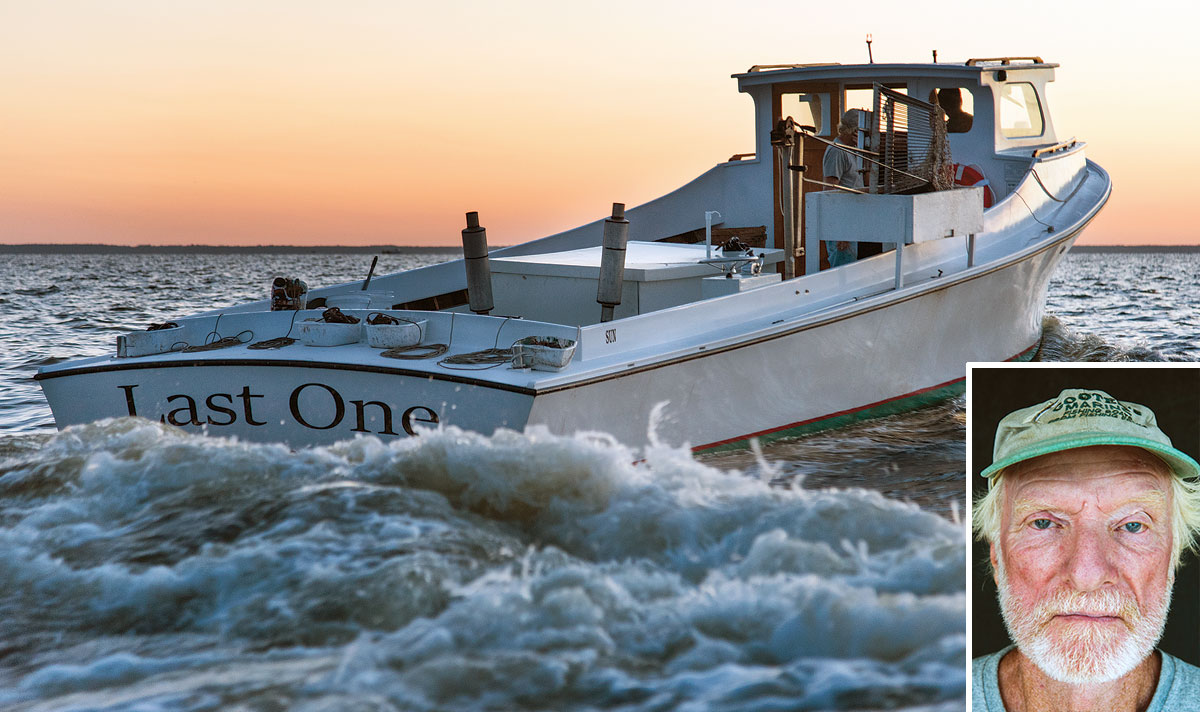 “It is always deceiving when you have her in the barn. It’s hard to tell how the boat will look and sit in the water,” said Millard (inset, right). Launching, in late May of 2016, became the most nerve-wracking moment for the father-and-son team; family came from as far away as South Carolina to witness it. But things worked out well and they made it in time for the crabbing season. LAST ONE is rigged for crabbing in the summer and oystering in the winter. She is powered by a 210-hp Caterpillar 3208 salvaged from another waterman’s boat, and with a 24×16, three-bladed propeller has a top speed of 16 knots. 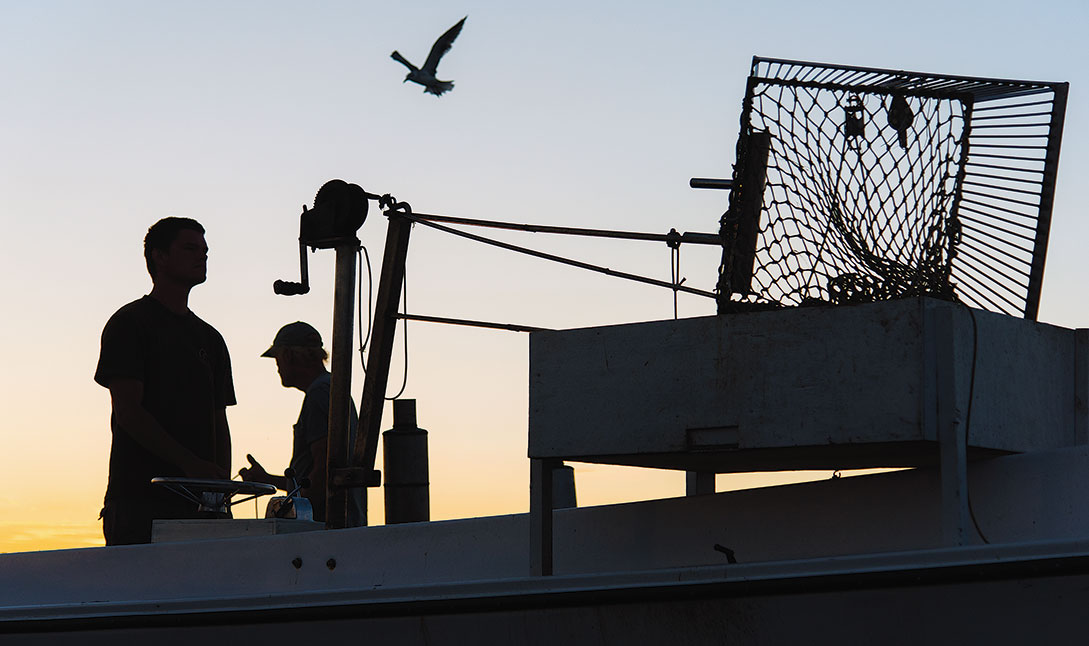 Sunrise on Fishing Bay silhouettes Lucas as he runs the boat, while his father guides line off the stern. A modern mechanical dipper has replaced the traditional hand-operated dip net. As the boat glides along the line, the crabs fall into the net.

After the launching, Lucas and Millard worked at crabbing in Fishing Bay through October, but once the oyster season opened, Lucas went by himself, harvesting oysters with physically demanding hand tongs. Lucas was not catching his daily limit, but he “was learning and making just enough,” said his father.

In a Chesapeake Bay that is constantly changing, working on the water will always be a learning experience for Lucas and other watermen.

Jay Fleming, a regular contributor to WoodenBoat, has spent many years documenting diminishing ways life on and around Chesapeake Bay. His images capture the full spectrum of the seafood industry, and include underwater shots of oyster divers, crabs shedding their shells, portraits of workers in picking house, and watermen in deadrise boats getting underway before sunrise. He recently collected these efforts in his first book, Working the Water, which was reviewed in WB No. 255.