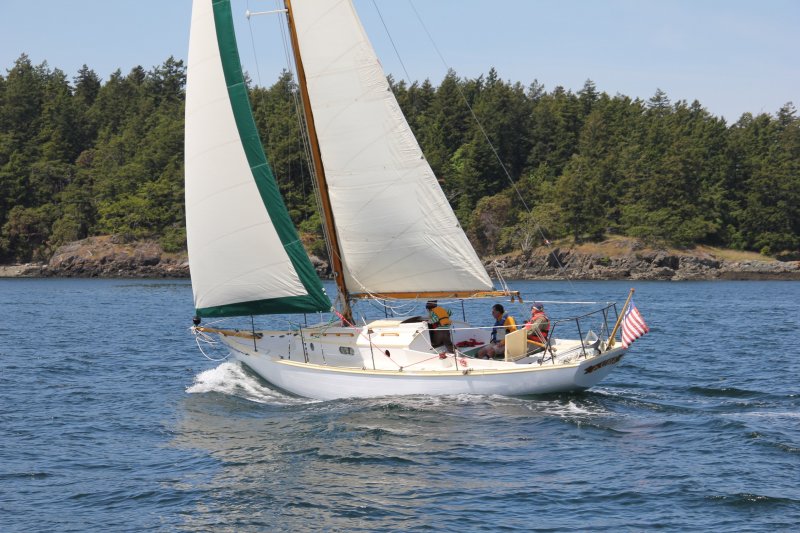 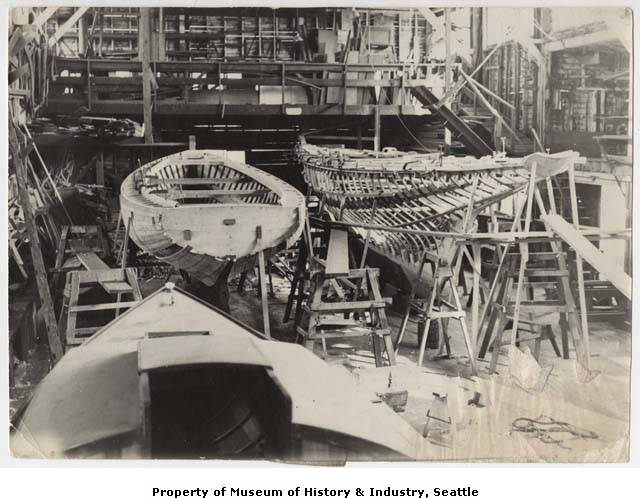 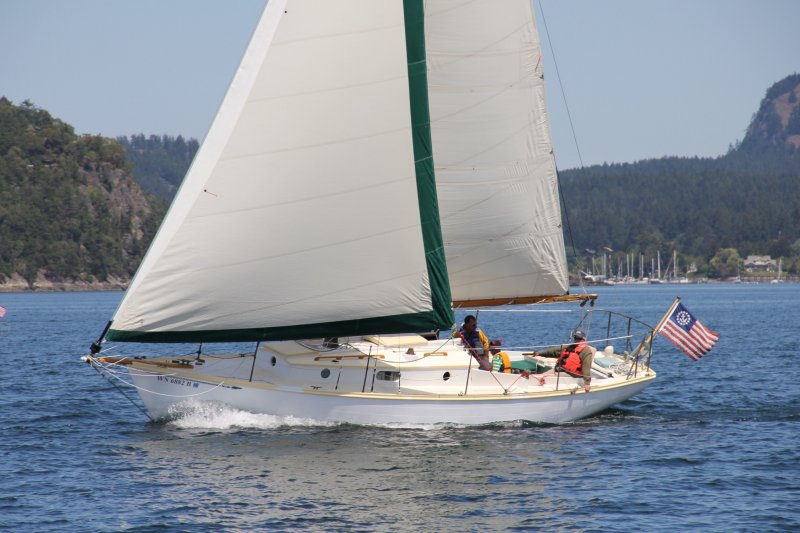 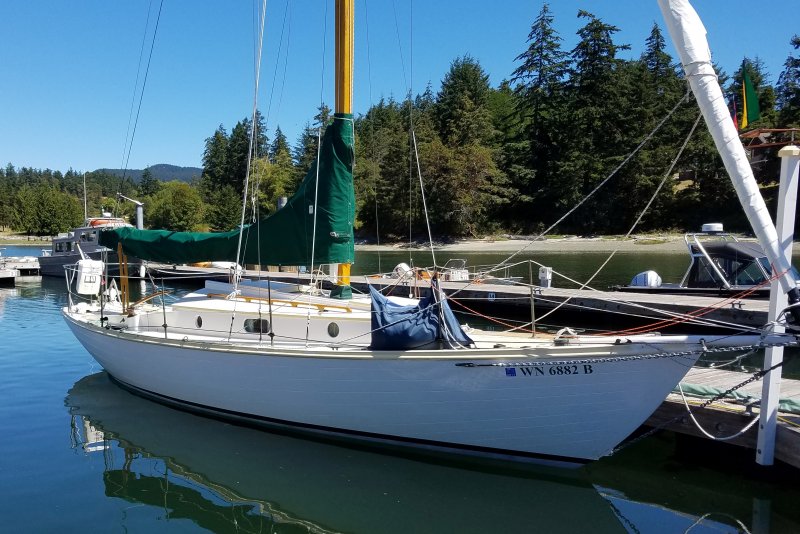 AURA was first owned by a well-off Arizona mining family. They made arrangements with Norman C. Blanchard, son of the founder, for one of the 33 foot sloops, then under construction on spec, which they named AIRA. They owned her for five years, sailing her in the summer, and returning her to Norm Blanchard during the ‘off season.’

This family then sold AIRA to Norm Blanchard (who mortgaged his house for her) with the stipulation that he change her name. Since it was considered bad luck to change a boat’s name, Norm changed it as little as possible. He describes the episode in his book of memoirs, “Knee Deep in Shavings”, in the chapter titled “How AURA got her Name”. AURA was owned and enjoyed by Norm from 1952 to 1977. He then reluctantly sold her to buy a powerboat, since he and his wife were not as nimble as they used to be. Ward got to meet him in 1996. A very gracious and knowledgeable man, he died in 2009 at the age of 98, a true Northwest classic.

In the years since Norm sold her, she has had a series of good owners who have kept her in great condition. She has had new floors, frames and planking around the mast step, and aft to the engine mounts. She has also had major changes to her cockpit, with new fuel tank aft of the engine, and new water tank under the v-berth forward. Other modifications include changing to a masthead rig with a shortened mast and a bowsprit, to ease the weather helm, the only Blanchard 33 to be so changed. Stanchions and lifelines with a stern pulpit were added in the 80’s.

AURA is a two-time winner (1997 and 1999) of the Northwest Wooden Yacht Racing Association series. The trophy is on display at the Center for Wooden Boats in Seattle. She won “Best Sailboat” at the 1997 Vancouver Wooden Boat Show. AURA competes every year in the Classic Mariner’s Regatta in Port Townsend, where she often finishes in the top 3 in Class B. A half-hull model of AURA carved by Norm is in the upstairs dining room of the Seattle Yacht Club. Norm also carved the name board on the transom.

The noted Northwest marine architect, William Garden, then aged 28 years, drew the plans for a 33 foot sloop in 1946, early in his long and diverse career, which ended in 2011 at the age of 92. The plans were for the Blanchard Boat Company on Lake Union in Seattle. Founded by Norman J. Blanchard, an immigrant from England, after the First World War, the Blanchard Boat Company was one of many high-quality boat builders in Seattle in the days of abundant local old-growth lumber and skilled shipwrights.

Blanchard built 8 boats to this design, one every six months or so. Some were fastened with bronze but most were iron fastened. B-33 #1, formerly in Blaine WA, was renovated by experienced boat builders north of Spokane and is now floating on Lake Coeur d'Alene in Idaho. One B-33 sailed to Hawaii and may have deteriorated there; one was built there and is probably MALIA, B-33 #2, still sailing out of Haleiwa. MALIA has cruised the South Pacific and the Caribbean. Of the other remaining Blanchard 33’s, only three are known to be in sailing condition, AURA, B-33 #5, VAGABOND, and SKYLARK, #3. VAGABOND is in Shilshole Marina, SKYLARK in Lake Union. SKYLARK, B-33 #3, was owned for many years by a marine carpenter, was recently purchased by the son of the man who owned her in the 60’s and 70's, and is now in very good hands. SEAWIND, B-33 #4, formerly of the Center for Wooden Boats in Seattle, is sitting covered on Whidbey Island, probably beyond repair. VARUNA had much work done, but then was sold for very little to a neglecting owner, and left mostly abandoned on a mooring near the Orcas ferry dock until 2014, then was taken ashore, hopefully for more work, but probably to rot away unseen. Another B-33 in Tacoma was reported as sunk, and has likely been broken up. The 9th and last B-33, named MRS. PETTIBONE, was built as a yawl, painted black, and was rumored to have been scuttled in Lake Washington for the insurance money. In the humble opinion of Capt. Ward Fay, if enough boaters in the Northwest had as much sense of aesthetics and maritime heritage as they have money, these beautiful wooden artifacts of a bygone age would not be in danger of being lost forever, and would be meeting annually in various shows and regattas, sought after, cherished, and perfectly maintained for generations.

AURA is 33 feet long on deck, and weighs six tons, with two tons in her cast iron ballast keel. Her hull is red cedar planking, over oak frames, on a backbone of fir and yellow cedar. She is iron fastened.