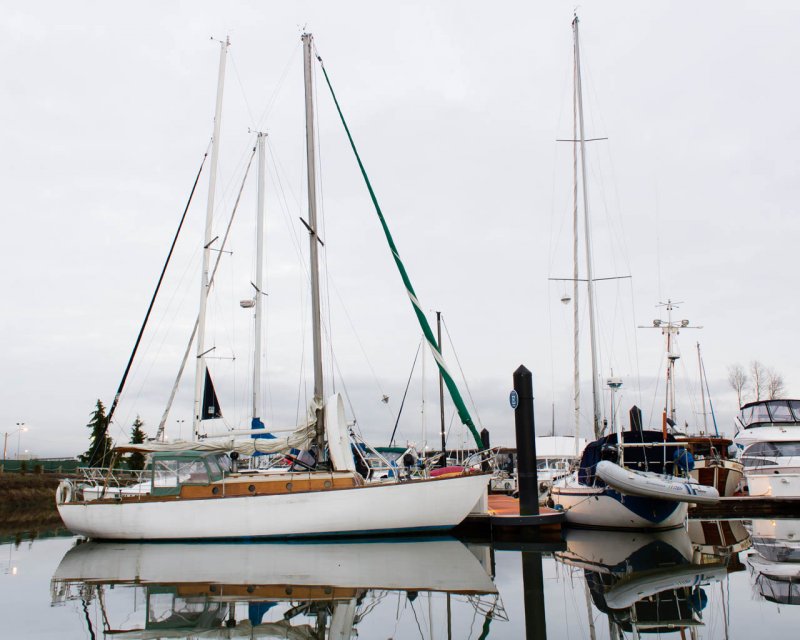 The L36s were built in both Southern California and Vancouver Canada. PANIOLO is one of the Vancouver-built boats and has a different interior layout; she has a Salon / Dinette with a pocket galley on the port side by the companionway. She also has an aluminium mast with a wood furling boom.

PANIOLO has had two owners since new. The first owner was an avid sailor in Vancouver. He was a surgeon who wrote for various boating publications and was an active member of the Royal Vancouver Yacht Club. PANIOLO is well-known in the waters of British Columbia and the Pacific North West and it has been my goal to bring her back into trim while respecting her heritage and her name.

I purchased her in rough shape in 2015 and have been slowly refurbishing her to as close to original condition as possible. I have rewired the boat with proper ANCOR marine safety wire and added a DC panel; replaced all lighting with LED; rebuilt the diesel cookstove and gravity tank; installed a proper bilge pump, switch, wiring and hoses; begun replacing all the rusted hinges and barrel locks; installed a new VHF radio and antenna; replaced the single battery with a dual-battery system and charger; moved the depth sounder to the cockpit; replaced all running rigging; rebuilt the mainsheet 4:1 block with clam cleat attachment; and serviced the Yanmar 2QM20 diesel; overhauled the standing rigging to free several frozen bronze turnbuckles and replaced several cross-threaded terminals; installed new spreader boots and a new mast boot and power-washed the interior of the fresh water tank in the bow.

PANIOLO is outfitted and rigged simply and has minimal needs for power and fuel. My goal is to keep her as close to original as possible, so I am avoiding adding much in the way of electronics or creature comforts. She has no pressure water, no hot water, no refrigeration, no propane and when it's cold, the diesel cookstove heats the entire boat.