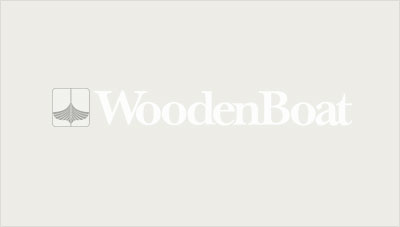 In 2003 I found it in a barn in Gilford, NH. Its aging owner could not remember where he bought it years before, somewhere down Maine! The plywood hull was and is sound. The original Atomic 25 hp motor was with it, but was siezed. I bought a mid-60s Lyman Islander which supposedly had a recently restored engine, WRONG! It had never been rebuilt, but we did the job over the next couple of winters, buying re-built starter and generator. Larry Brazil in Gilmanton Iron Works, NH did a nice job re-fitting the larger engine to the original drive shaft and propeller, but that led to new awareness that some engines and propellers are right hand turn, and others right hand tirne. Fortunately, we found the original prop for the Lyman engine and our Kingfisher finally went forward when in forward gear!

We have cruised Lake Winnipesaukee some but found that Merry Meeting Lake in New Durham, NH was more user friendly! We’ve had only one consistent problem. A third new starter will be installed by Larry Brazil and then (hopefully) we should be assured of consisitent cruising wherever we trailer it.

As we speak I am restoring a 1955 Lyman with a Johnson 33 hp outbourd engine that is basically sound, and the engine is lke new! My ultiimate goal is to get a Lyman Islander that is ship-shape and (maybe) part with the other two boats. We do not have water frontage on the water, and cannot afford same. Thus, we need to keep within garage-sized boats that trailer comfortably!

My partner in these restorations is a boyhood friend who built several kit boats in the 1950s for use on Lake Pocotopaug in central Connecticut. His occasional kindness (letting me solo on several of his small boats) triggered my desire to have a woody, but I had to wait for retirement to start. We both retired about the same time and ended up an hour apart in central New Hampshire, after spending most of our working years in Massachussets. In these past 13 years we have restored several small boats, canoes, and kayaks, and he is currently into the third year building a 22′ Simmons Skiff from scratch, for use on Long Island Sound off Leetes Island, CT. We work alone save for one day each fall/winter/spring week we the work that requires four hands and two brains!