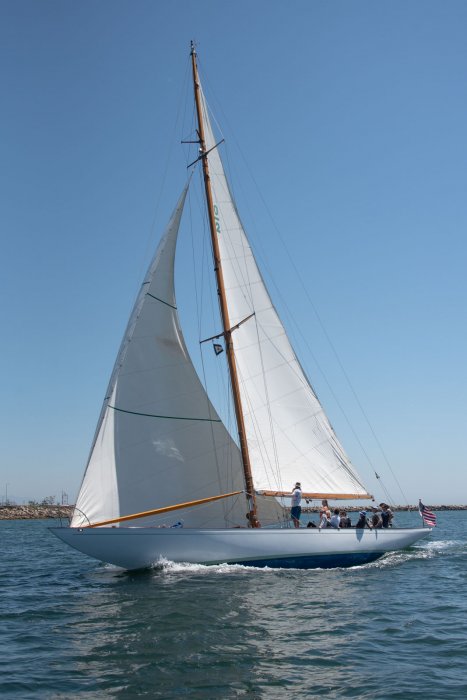 Hello, my name is SALLY. I am a Ten-Meter class sloop. The ten meters are not my length but a formula that has to do with several of my dimensions. It’s a design rule that became popular in the 1920s so skippers didn't have to argue about handicaps. I was built in Germany and came over to the US with my 13 sisters in 1928. We were the hot new youngsters on Long Island Sound back then. A number of older boats were looking at our little transoms which were drawn by a famous American designer, W. Starling Burgess. Our measurements were a racy 59 feet long, 10 1/2 feet wide, 80 feet tall, and 8 feet deep. We were comfy below deck—our skipper had his own cabin aft and space forward for the paid crew.

I only sailed the Sound for one year before the market crash in 1929. It was pretty rough for my skippers. I went from one to another until I was laid up ashore. Then, during the war, a new skipper shipped me to Southern California where I sailed with some of my sisters who also came West. Those were great times racing in the waters off Newport Beach.

I have seen a lot of boats come and go in my time. The big heavy ocean racing schooners, and then came the newer yawl-rigged boats, my bigger cousins—the 12 meters, and J Class AMERICA’s Cup boats. In my later life I sailed with the Cruising Club of America (CCA) designed boats, then the International Offshore Rule (IOR) fleet, and the ultralights. For some reason, the bigger the transom, the more I had to look at it.

Sometimes, if there was a little more wind, I could show my transom to the newer boats—but I was getting old and tired. Slowly, time took its toll and I could not crack on hard in a blow without hurting myself. I was afraid I would wind up a hogged old scow or worse, toothpicks and tire weights, like some of my sisters had.

By the 1980s I was getting pretty tired and it wasn't looking so good any more. My brightwork was shot and my bottom was leaky. I thought I was at the end of my career like so many of my other friends from the 1920s. One day a new skipper found me in Santa Cruz. He was not just any skipper, but a young boatbuilder—not at all scared off by the amount of work that I needed. He cleaned me up a little and took me out to spread my wings. I gave him and his crew a great ride. He must of liked it because before I knew it, I was off to San Diego. He put me in better shape, and I was soon out racing again—even showing a little transom off to a few other boats.

It must have been all the good sailing rides I gave my skipper and crew—and perhaps a few of the good times in my saloon—that made them decide that I was to be rebuilt, better than new. During my last race in December of 2010 I held my own against Dennis Conner on BRUSHFIRE—the only boat that beat me. The next morning I was in the yard, rig out and on the hard. My skipper cut great holes in my bottom and let the years of grit run out of my bilges. I was as scared as anyone might be of major surgery, but this was my big chance to be young and strong again...and maybe even a little faster.

Inside the great shed at the Koehler Kraft yard, I saw some of the wonderful things that they had done to other boats. Many of the boats that came out of there had shown their transoms to me. I knew this would be good for me. It was a long surgery that took two years: new ribs, stem, tail feather, and planking. All of this was sealed up and glued together with this incredible new stuff called epoxy. I felt incredibly strong and light as I slid down the ways and back into San Diego Bay in 2012. I was so excited about my new bottom, I jumped at the chance to spread my wings just a couple hours after my re-launching. The crowd at the yard cheered as I sailed out the fairway back to my slip at San Diego Yacht Club. I could not believe how tight and dry my bottom was. It was a good thing I was back to sailing so well, as my new engine was not completely installed. So I sailed right into my slip, just like the old days before I had an engine.

A few months later, I was all put back together and my skipper got me new sails. What a treat to have new wings and a new bottom. Now I could really hang on in a breeze and show my little transom to a few other boats, without a worry of hurting myself. Whether we win or lose the race, we always win the party. If you didn't see my transom on the race course, you will on your way ashore after a few rum drinks in my comfy saloon.

For the past several years I have tried to look my best for Opening Day at SDYC. Each year I get so much attention that the judges have honored me with the Best Maintained Classic Yacht award. A couple years ago, I even got the attention of a new mate to help the skipper sail and take care of me. She is as good as the skipper at my helm, but don’t tell him I said that.

So here I am in 2019—91 years old and still showing my skipper, mate, crew, and friends a good time. They have worked hard to make me look my best for another season of sailing and good times. I really love putting a smile on visitors faces when they come aboard. If you look closely, you will see a few battle scars because I am not a dock Queen. I am out on the water sailing hard, every chance I get. There is nothing that makes a yacht like me happier than being sailed often with happy skipper and crew.