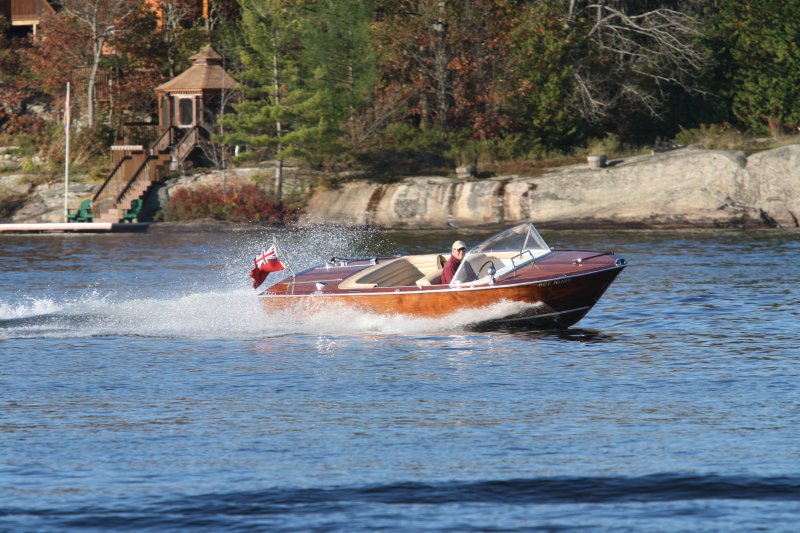 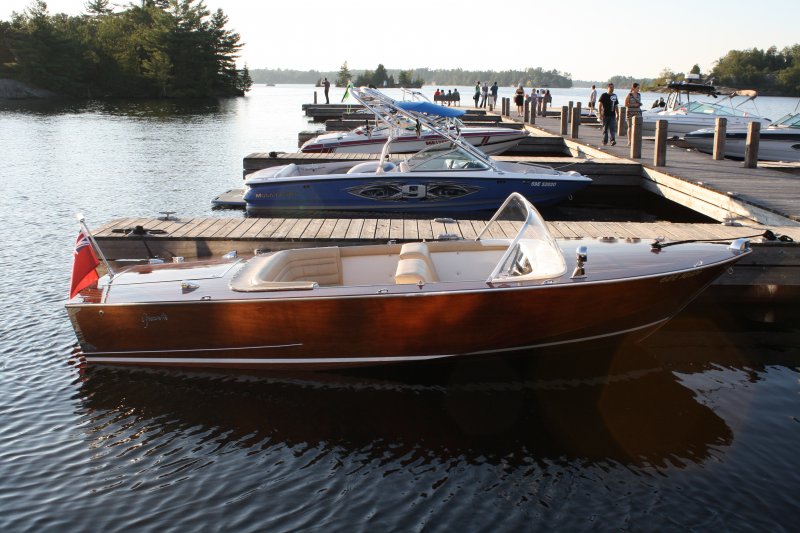 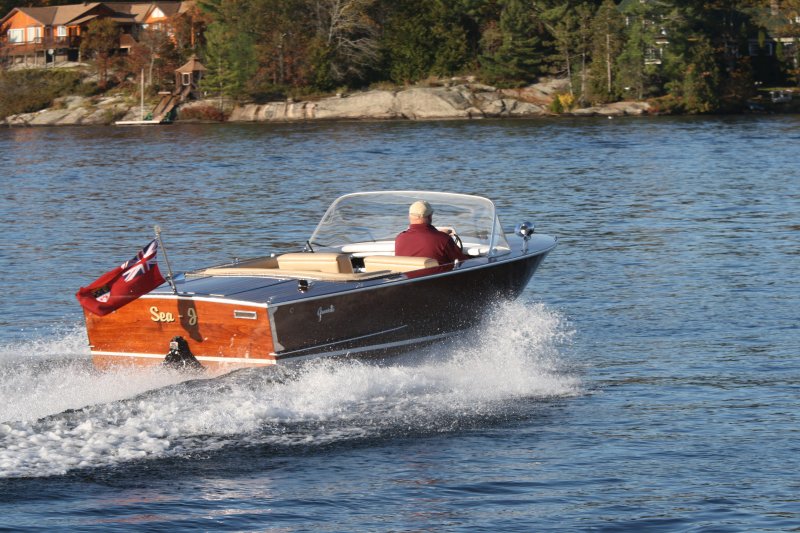 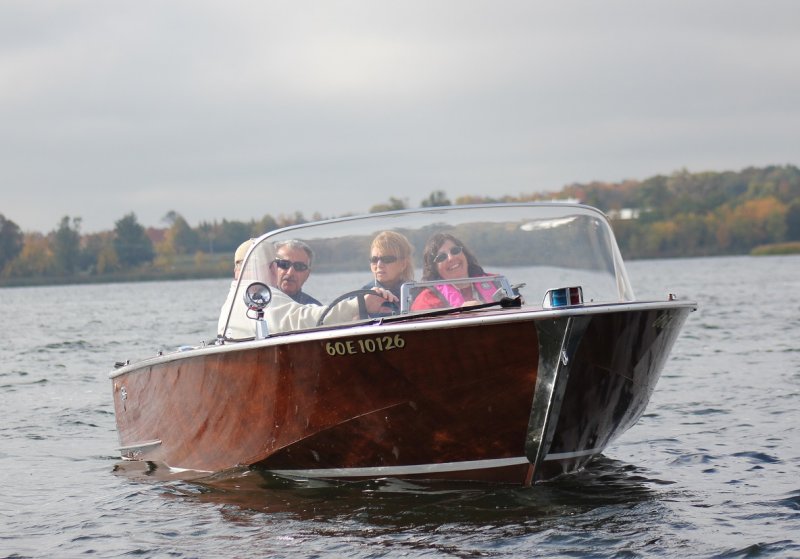 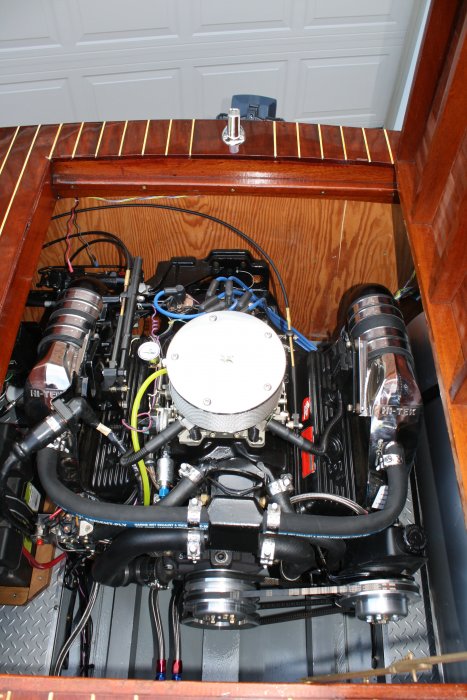 The Sunflash IV is a soft riding luxury runabout designed as the pinnacle of the thoroughly proven and popular Sunflash series. It ultimately served as a platform for the Greavette Montique and as the model for Greavettes fiberglass “Runabout” project produced in 1978.

SEA - J is an early 1972 model and has been repowered with a modified 4.3 liter Mercruiser engine producing 236HP and an SEI Alpha stern drive. She has a wide beam with flared bow, deep vee bottom and a high freeboard for safe, comfortable, dry riding at any speed. The original Sunflash IV list price was $7,200.0.

In September 1986 an ACBS member, purchased MONI-LYNN as a “refinishing project”. Preliminary inspection showed mostly cosmetic issues and she was in mechanically excellent condition. However, upon further inspection of her structures, water and snow damage necessitated the refurbishment of much of her freeboard and decking. With love, care and elbow grease 187127 was re-launched in July of 1987 at her new home in Ahemic Lake (Magnetewan), as “ORION”. For 20 more years the runabout provided faithful service until she was purchased by her 3rd and current custodians in September of 2008.

A complete program to restore the hull was adopted, and work began in earnest September of 2010. Frames, stringers, transom and portions of the keel were replaced to give the new hull strength for another 40 years. At this time the original Mercruiser 165 IL6 and pre Alpha drivetrain were re-installed by the spring of 2012. Also at that time the boat was completely rewired. A custom upholstery with updated design true to Greavette was fabricated and installled with some small modifications (room for a hideaway convertable top).

Re-christened “SEA – J”, 187127 saw water again in August 2012 at Stony Lake (her first home) to begin her post refit sea trials. She then spent some time on the Indian River at Port Carling to attend to sorting out. Her first post-refit voyage was the 100 mile cruise of the Muskoka Lakes alongside the 1887 Steamer Segwun and many other classic wooden water craft at the ACBS event “BIG Cruise for a BIG cause”. Unfortunately, an overheating issue prohibited the completion of this trip and she spent the rest of the summer in and out of the shop in attempts to correct the issue. After several unsuccessful attempts the decision to repower was made.

In October of 2012 a Mercruiser 4.3l engine and Alpha drive was located and procured for transplant into the Greavette. Over the winter months the 4.3 was rebuilt and upgraded. Fitted with Vortec heads and 1.6:1 roller rockers, the valvetrain also received new valves and springs. The camshaft was reground to a performance specification and new pistons/rings were fitted. In order to maximize the potential of the core, this block received an Edelbrock 2114 “performer series” intake manifold and matching Edelbrock 1409 “performer series” 600 cfm carburetor. The exhaust chosen was the Hi-Tek stainless steel one piece manifold, as the weight savings and performance gains proved to be exactly right for the application.

To enable a proper fit, an engine cradle was designed and fabricated from ¼” aluminum. This solution utilized the factory mounting pick up points on the transverse frames while providing a sturdy “stringer” for the modern motor mounts of the V6. The aluminum cradle also lends strength to the existing frame structure. Other modifications that enabled the fit of this engine included a custom oil pan and pickup to clear the transverse frame. A reorganization of ancillary systems was made at this juncture to ease the layout of the engine compartment. All fluid lines were changed to braided stainless steel type as a remote oil filter and fuel filter were added. Lastly a custom fabricated stainless steel fuel tank was designed and fitted in the engine bay.

SEA-J found the water once again on July 30th 2013, at Gravenhurst just steps from where she was built 41 years prior. She was run-in on the Muskoka Lakes and has proved to be a reliable, comfortable and easily handled boat while her contemporary re-power has elevated her performance level to a surprising level.