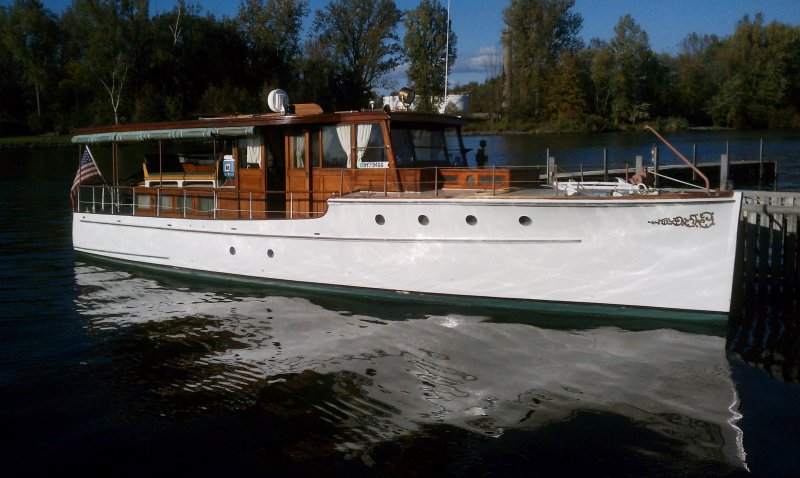 Spindrift II is a one-of-a-kind 46′ Elco Flat Top Cruiser. Built in 1929 in Bayonne, New Jersey for Judge Harold Medina and his wife Ethel, this classic yacht has a cedar hull and mahogany deckhouse. She sleeps four in two staterooms, with a galley (kitchen) and two heads (bathrooms). Her deckhouse also serves as the main salon. Above deck in the aft she has a spacious deck, an Elco lifeboat from the same era and a large Cleopatra seat. Her hull is still cedar without a fiberglass sheathing that you often see on vessels of this era.

This resilient vessel has survived the test of time. She has amazingly survived two sinkings and the Great Hurricane of 1938, where she ended up on the 12th fairway at the Westhampton Country Club. She has resided at several locations along the East Coast, including Long Island (where she resided during the 1938 hurricane), Connecticut, Florida and now Central New York.

Originally owned by Judge and Mrs. Medina, she has had a number of owners over the years that have invested a lot of time, money and energy into maintaining and restoring her. She is currently owned by Doug Reicher and Camille Tisdel of Syracuse, NY.