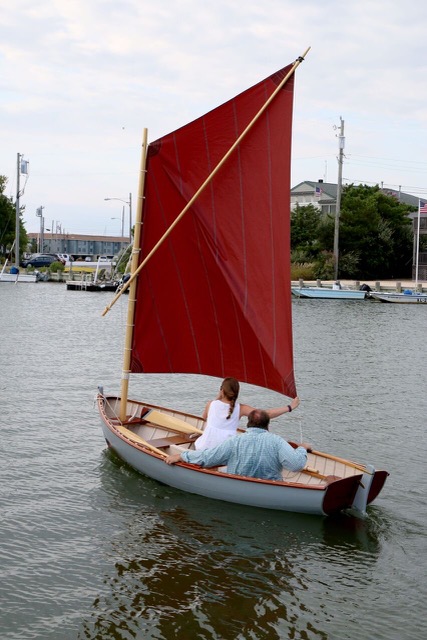 This is a cedar-on-oak Catspaw Dinghy, fastened with bronze screws. The stem is a single piece- without stem knee or joint of any kind- of American Larch, and the keel and transom knee are white oak. The transom, thwarts, inwales and outwales are mahogany; inwales and outwales are through-riveted with copper. The centerboard trunk is marine plywood (sapele?), and the centerboard is a solid piece of mahogany with a 14-pound poured lead insert. Rudder is a single piece of cedar, and the tiller is white oak. Spars are Sitka spruce and the oars are Shaw & Tenney standard 8' spruce rowing oars. Cordage is 5/16″ synthetic line. She carries ~61 square feet of nylon sail, tanbark in color. Anchor is small, Danforth-style galvanized steel, attached to 50′ of 5/16″ line with shackle and 4′ of chain rode.

YANKEE DAHLIN' was begun by a Fundamentals of Boatbuilding class at WoodenBoat School in Summer 2014. Owner’s 2015 Fundamentals class brought hull to point where it could “go home.” The owner transported the hull via truck from Brooklin, Maine to Beach Haven, Long Beach Island, New Jersey, where he completed construction, and painted her during Winter 2015-2016. Spars were fashioned and she was rigged early Summer 2016. YANKEE DAHLIN' was launched August 2016 at Little Egg Harbor Yacht Club, whence she sailed 2016 - 2018. Since 2018 she has sailed from Chester River Yacht & Country Club, Chestertown, Maryland.