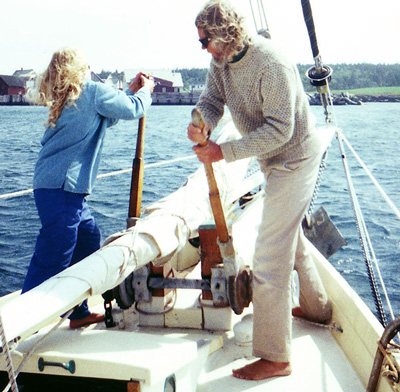 Boats that leave the dock and go somewhere (other than to another dock) need ground tackle. I briefly discussed ground tackle for cruising boats in Choosing Anchors And Rodes. Boats much over 10,000 lbs in displacement generally need a windlass to weigh anchor, and the subject of windlasses can bring otherwise mellow cruisers nearly to blows… particularly if any quantity of rum is involved!

My personal taste in cruising sailboats tends toward traditional, and big. By big I mean over 50 feet LOA—beamy, of moderate displacement (by today’s standards), and pragmatic—typically a gaff-rigged schooner, ketch, or Marconi-rigged cat schooner. Big boats require big ground tackle, and big ground tackle requires a good windlass. And at that point I part company with most of my fellow cruisers.

The best windlasses I know of are those made by Lunenburg Foundries in Nova Scotia. They were traditionally offered in either hot-dipped-galvanized steel, or naval bronze. These are ship’s windlasses, used for centuries by coastal trading schooners and Grand Banks fishermen. The types I prefer are the smaller versions, which are directly turned by big ratchet gears into which wood handles are inserted. Pawls (or dogs) hold the windlass drum while the ratchet handle is reset. Releasing the pawls, and disengaging the ratchets by laying their handles aft on the deck, allows the windlass to spin free. If anchor chain is lying in the chain gypsy, the anchor is dropped by allowing the windlass to spin.

To drop anchor using the windlass (as opposed to taking the chain off the gypsy and allowing it to run free), you lay the ratchets aft, disengaging them, and also disengaging one of the locking pawls. Grab the chain in front of the gypsy, pull it up about 6 inches, and simultaneously trip the remaining pawl up while dropping the chain (thus taking it out of tension). Watch your fingers! The chain will then run free. When the anchor is on the bottom, the rode will slow down enough to grab it (leather gloves are advised), and either make it off to the bitts (figure eight pattern), attach a chain hook and lanyard, attach a “lizard” (snubber), or leave the chain on the gypsy and engage the locking pawls (only in gentle conditions, or temporarily). 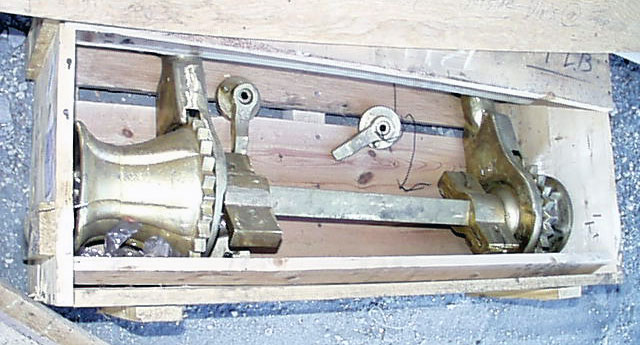 Two people can weigh anchor by having one person on each handle; by alternately cranking (pulling aft on the handle), the windlass drum is turned with each pull. To break the anchor out of a sticky bottom, both people pull on their handles simultaneously. One person uses the windlass by standing behind it and pulling each handle alternately (like a “Nordi-Track” as one of my girlfriends put it). I could weigh anchor alone on LEOPARD, my 75′ Virginia Pilot Schooner, whose working anchor was a 105 lb plow with a ½″ all-chain rode.

The Lunenburg windlass is bolted to the backside of either a single, wide mooring bitt; or to the backsides of two bitts with a space between them. I prefer twin bitts on all but small vessels. The pawls are bolted to heavy wood blocks (like huge thumb-cleats), which are in turn bolted to the bitts and through-bolted to the decks, beneath which heavy, thick wooden partners are installed between adjacent deck beams. I prefer using seasoned white oak for all these components. While it is tempting to arrest the outfall of anchor chain by dropping a pawl against the ratchet wheel, this is a bad practice (something will break or bend) unless the chain has all but stopped, and has minimal tension on it.

Safety dictates that fingers and other body parts be kept clear of working parts. It is also bad practice to anchor by leaving all rode tension on the windlass—correct procedure is to wrap the chain around the bitts, or to use a chain hook shackled to a cable, in turn cleated off to the bitts or another suitable terminal. 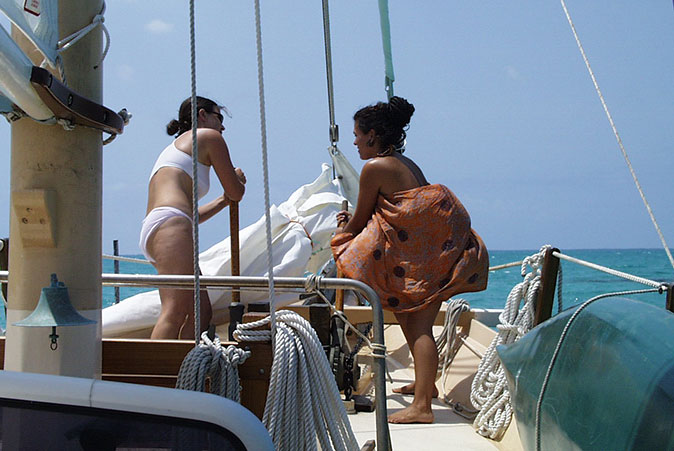 Lunenburg Foundries used to make this type windlass in several sizes, the smallest of which was appropriate for vessels of 20,000 to 30,000 lbs displacement (between 35 and 45 feet in length on deck). LEOPARD is 61 feet on deck (75’ LOA), and TIEN HOU is 50 feet on deck (65 feet LOA). I turned LEOPARD’s windlass handles (including a spare) on my 39″ wood lathe, using white oak. For TIEN HOU, I used a cut-down pair of ash oars (factory seconds from Nova Scotia).

There are many other kinds of good windlasses, from push-button power jobs to double-acting single-handle models. When I was building my 44′ cat schooner TERESA, I purchased most of her hardware (everything from anchors, blocks, portlights, cleats, to even interior lights) from A and B Industries in California. My OEM (original-equipment-manufacturer) discount was 65% off list price, and the hardware was strong and beautiful. All of this hardware was made in China, back in 1985, when quality was (perhaps) better than it is now. 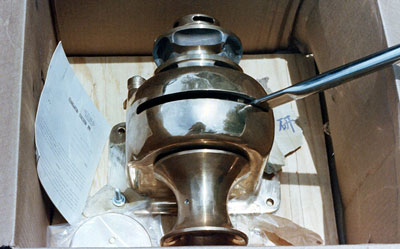 The ABI windlass was all bronze and stainless steel, with a double-acting handle (pulls chain in both directions), and it was beautifully made and finished. It worked perfectly, but I was careful to keep it greased. It had a clutch/brake on one side (top of the photo), which was released and stopped with the stainless steel handle. It also had a chain gypsy on one side and a rope head on the other, which is how I like my small windlasses. The ideal windlass would have chain gypsies on both sides, with a rope head outside of the port gypsy. I assume the ABI windlass was a copy of an American or European model, but I don’t know which one.

Today, with the changing demographic of cruisers, most people don’t want to be bothered with a manual windlass, and use one of the many available power models. Most of these are electric, requiring a dedicated battery near by, as the wire size to handle the current draw from a remote battery would exceed the cost of the dedicated battery. Some big-boat power windlasses are hydraulic, requiring a motor-driven hydraulic pump, with pipes, hoses, and controls. All should have a manual backup system that is practical to use. 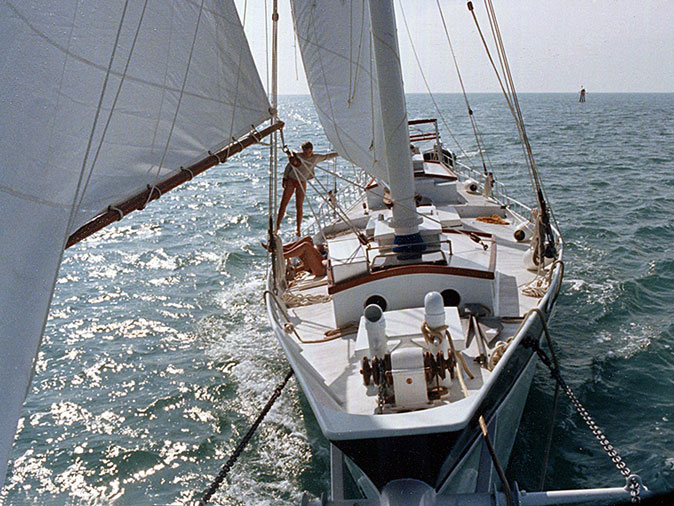 LUCAYAN sailing in the Florida Keys, with her electric windlass in the foreground.

When I completed the aluminum ketch LUCAYAN in my Islamorada yard in 1987, I installed an electric windlass with twin chain gypsies and dedicated battery. I ran charging wires for the main engine’s alternator to the windlass battery, with an isolator to keep it separate from ship’s batteries. LUCAYAN’s windlass had clutch/brakes on both sides—very convenient for dropping anchor.

For the custom Exuma 55 schooner WILD HARE, I had the additional challenge of using the windlass to raise and lower her tabernacled masts. After much research, we settled on a stainless steel Lighthouse windlass, also electric, and also with a dedicated battery system. This windlass has gypsies and rope heads on both sides, with clutch/brakes on both sides. It was expensive! 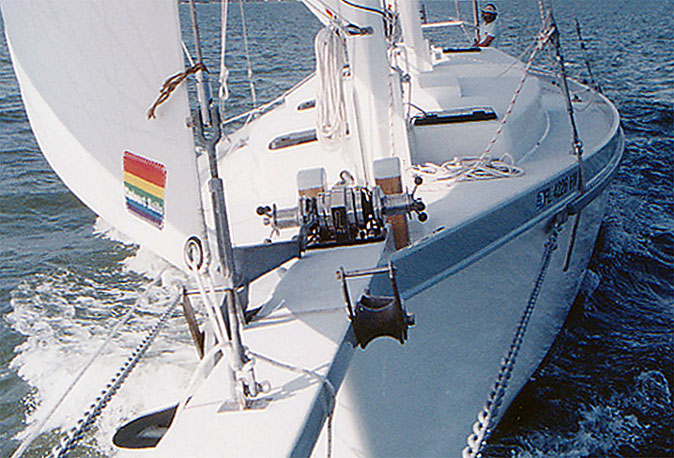 WILD HARE’s windlass had chain gypsies and rope heads on both sides.

In another blog, I will write about bowsprits and anchor rollers. 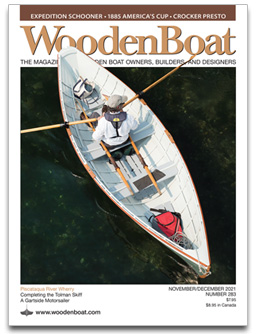