The Delivery from Hell—Part Three: Virginia to North Carolina 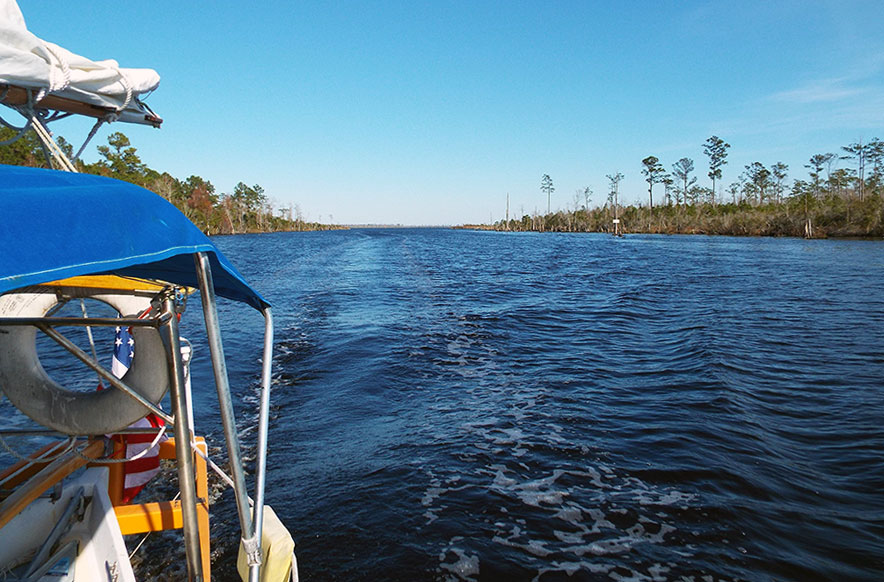 Back in the ditch—Virginia ICW

Tuesday 11/24/15—I awoke to find the forward cabin hatch frozen shut. IBIS’s decks were covered with ice. Even the ICW—which is salt water—had skim ice everywhere. I remember thinking this was just not fair! But—why should life be fair? Was that ever in the itinerary? After breakfast, cowering in the aft cabin with the oven on—I moved over to the Atlantic Yacht Basin fuel dock and took on diesel and water. I told the dock attendant to give my best to yard manager James Taylor and mechanic Bobby Janzen, both of whom had been so helpful on my previous delivery of the antique Chris Craft JB last spring (see Posts #40 & #41).

By 1500 I was looking for the entrance to Broad Creek, a convenient place to anchor before crossing Albemarle Sound, because there is no good place on the other side (Alligator River), and anyway it would be dark by the time I crossed. Cruising along the shore, I hit a shallow bar (or submerged tree), which pushed IBIS’s centerboard up into its trunk. This is a common enough occurrence, and usually not a problem, but this time, the board evidently trapped the stainless steel wire rope pennant against the trunk, and shredded it! I had designed the trunk and board to prevent just such an accident… but bad luck always finds a way. The centerboard—with nothing restraining it—could then swing all the way down and far forward of where it is supposed to stop.

I passed a ½″ nylon bight under IBIS from her bow and tried to worry it under the centerboard while I was hard aground in shallow water. I fixed one end of the line at the bulwarks, attached the other end to my main halyard, and took it up as tight as I could… but the board did not move.

I was starting to come to grips with the realization that every day of my life was bringing me a new disaster. I got off the bar and dropped anchor off Broad Creek to spend a restless night hating myself. Centerboards should always have a safety pennant in the event of breaking the tackle… what had I been thinking?

I had built a large, heavy, lead-filled steel centerboard for IBIS, which weighed 1,250 pounds. I had originally designed this new type of centerboard for a custom racer/cruiser for a client in Australia, and I wanted to test the design for myself. The board becomes a ballasted high-aspect-ratio fin keel in the down position, giving IBIS a draft of 7′ 8″, and a powerful righting moment from full-capsize. This, however, is just not right for a gaff-rigged sharpie designed to cruise in shallow water. But it was my only opportunity to test my invention. Now it was out of control under the hull, with no means to raise it… and I was not going diving in ice water! 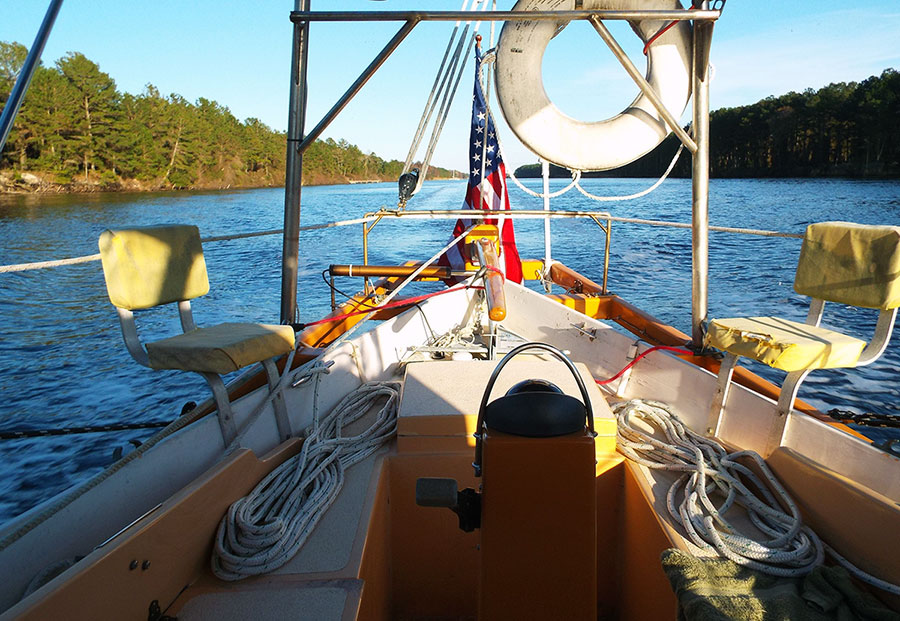 In the Pungo River, North Carolina; The figure-eight coils are for main & fores’l sheets; The gold piston aft is the Raymarine Autopilot.

Wednesday 11/25—At first light, I deliberately ran IBIS hard aground again to try to push the board up high enough to secure a new lanyard through the aft access port in the top of the trunk. I was unsuccessful, but I managed to raise the board slightly higher. By 0900 I was out on Albemarle Sound, motorsailing under fores’l. I ran up the seemingly endless (and featureless) Alligator River (no alligators), and at 1630 I anchored in the Pungo River, off the end of a very long canal. There was a beautiful red sunset and a full moon rising. 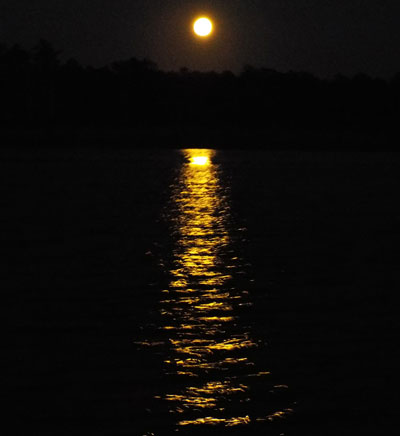 The full moon rising over the Pungo River.

Thursday 11/26—I came on deck to weigh anchor… and it was warm out! I became overzealous and dressed in shorts and tee shirt… only to realize that in the wind, out of the sun, it was not warm! Quick change of wardrobe. We continued to pass every sailboat we encountered, including two catamarans—IBIS is fast! Although 7 ½ knots sure doesn’t feel fast… maybe everyone else is just really slow. IBIS is actually the slowest sailboat, under diesel auxiliary, that I have ever owned (well—FISHERS HORNPIPE may have been a little slower). Just after sunset I came into Beaufort, North Carolina, and anchored near the beach, behind the crowd. I typically go ashore here—an old favorite—but I was tired, it was late, and the dory was on deck. It had been another ten-hour day, and I was done. 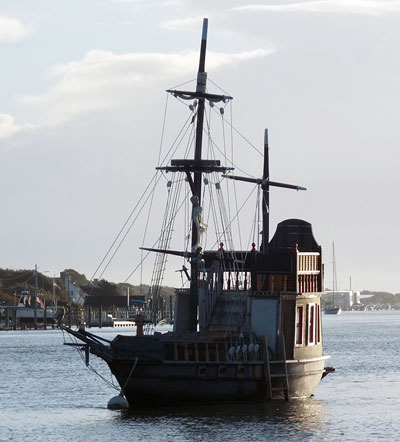 I awoke in Beaufort to the sight of this very strange vessel behind me at anchor.

Black Friday 11/27—I weighed anchor at 0810, noting again that it seemed warm (out of the wind). Within the hour, I removed shoes and socks for the first time! And I had NEVER worn shoes on board any boat, ever, before this. (There is a first time for everything….) For deck shoes I was wearing soft rubber “Crocs,” but I always removed them to go below. I noted that IBIS was losing at least ¼ knot to the centerboard and rope sling, but that we were still making good time. Around noon I came upon a traffic jam caused by a severe shoal extending beyond the middle of the ICW, leaving a narrow channel all the way on the west side. There were two vessels hard aground, and I was nearly added to them when a small powerboat raced up to warn me (the green can marking the shoal was blocked from view). I hit bottom hard, and cranked the helm over and floored it—skidded my way off just before the racing current would have added IBIS to the disaster. 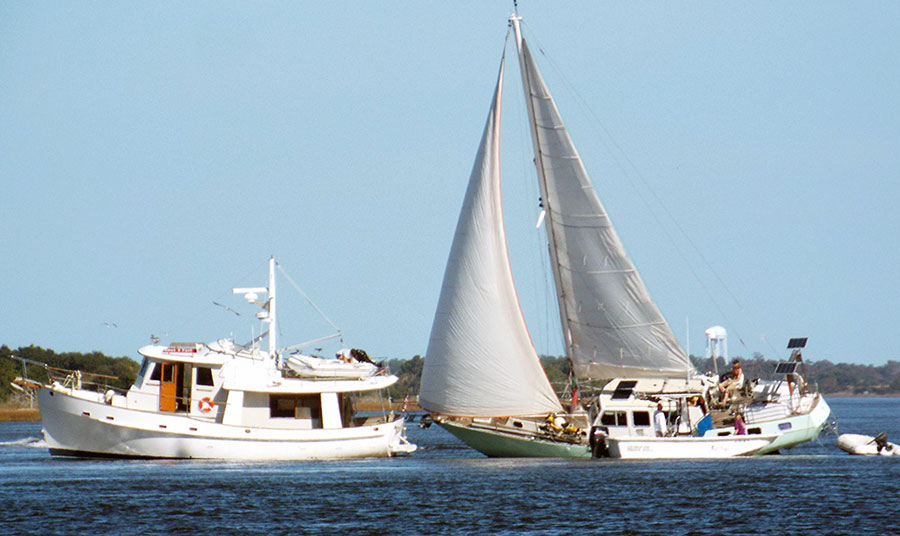 A trawler yacht and motorsailer hard aground on a shoal blocking the ICW.

I was further delayed waiting for bridges to open, and wistfully remembered that JB (my spring delivery), effortlessly passed under every one of them, being less than 11 feet above water. My somewhat profane log notes state emphatically that the only practical way to transit the ICW is by small, light, fast, low powerboat… like my Commuter designs. Sometime after sunset I started to run aground in the middle of the ICW channel until I was hard aground. I deliberately drove IBIS even harder aground, out of the channel, hoping again to access the hole in the top of the board for the securing pin. If I could just tie the board up, my problems would be over. I spent an hour screwing around at this, but the board just went down and down… it was so damn heavy it acted like a huge butcher knife, slicing deeper into the hard sand bottom! My line around the board had slipped off, so I had to replace that, again using the main halyard to tension it. I tossed an anchor over, and spent the night aground on the side of the ICW.

Black Saturday 11/28—A huge powerboat wake drove me out of bed at 0520. I tightened my rope loop around the centerboard as much as possible, and waited for daylight and high tide. I was in a very bad mood. I wanted a rocket-launcher. I started trying to get off the bar at 0645, and didn’t succeed until 0720.

I began looking for a fuel dock. I knew my starboard fuel tank was low, so I switched to the port tank to transfer fuel. The Isuzu diesel has an electric fuel pump that pumps many times more fuel than it can burn, and this excess fuel is discharged back into the starboard tank. Having it also be able to discharge into the port tank would involve a plethora of additional plumbing, plus an additional selection valve, in locations that were very impractical. That afternoon, just as I was passing a very shallow, dangerous inlet on a strong outgoing tide, THE DIESEL QUIT! I limped off to one side of the ICW, the engine sputtering, and anchored right off a beach covered with travel trailers. A small crowd gathered to gawk at me. I changed the fuel filter and noticed that the old one was only half full of fuel. Checking the starboard tank, I found it was empty—I had simply run the poor diesel completely out of fuel! Duh!! I had not transferred enough fuel to keep going. I switched to the port tank and the Isuzu fired right up and ran fine… I did not even need to bleed the injectors. Let me say this right here—that old-school Isuzu 3LD2 is one tough little motor! 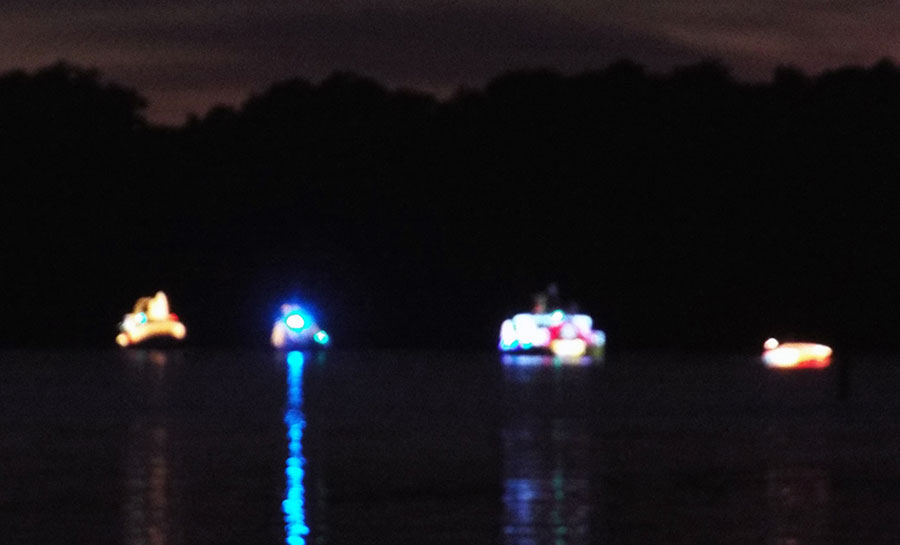 The distant, blurry lights of a nautical Christmas parade.

At 1730 I anchored in the Calabash River, which was considerably deeper than the chart showed, in company with two other cruising sailboats. When the engine faltered again, I switched tanks (back to stbd)—the electric pump had transferred all the fuel over. While all this chicanery was going on, I was passed by a Christmas parade of boats, happy drunk people yelling and carrying on…. I joined them in a much darker mood (having a drink, that is). Merry Bah Humbug!