The Delivery from Hell—Part Two: New Jersey to Virginia 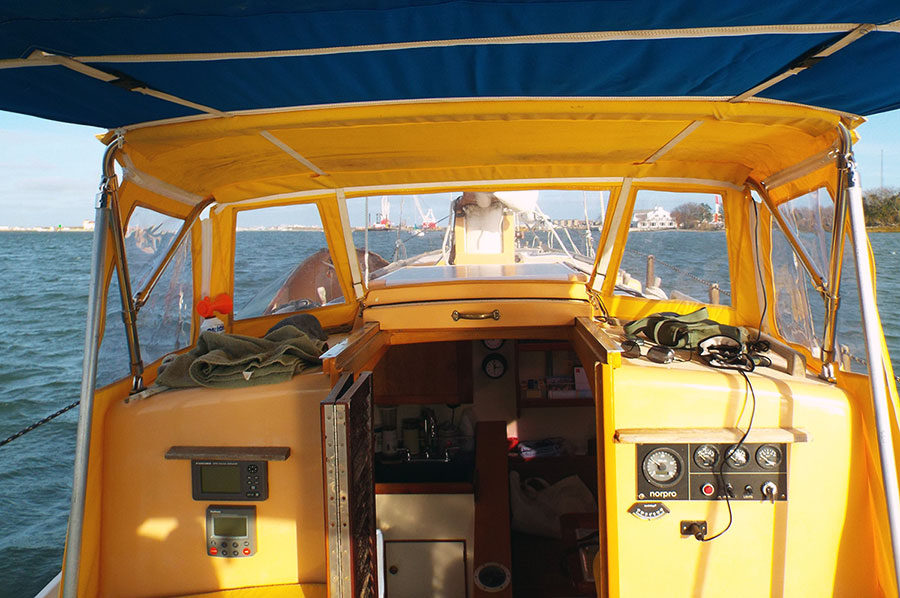 Sunday 11/15—Having departed Holiday Harbor Marina in Waretown, NJ, (a really good boatyard), I proceeded to motor down Barnegat Bay and the New Jersey Intracoastal Waterway. The problems with the Jersey ICW are three: lots of long, meandering channels; numerous 35′ high fixed bridges; and inattentive bascule bridge tenders. I anchored just before 1700 that first day, because I had to wait a half-hour for the Margate bridge to open (after calling repeatedly and sounding my air-horn)—and I lost the sun. I didn’t want to navigate the ICW in the dark if I could avoid it. Only certain key navigational aids are lit, and it becomes necessary to use a powerful spotlight to pick out the unlit day markers between them. This is hard to do alone, especially when your eyes ain’t what they used to be.

I should state right here that The Delivery from Hell was not due in any way to faults of IBIS. It was a rotten combination of circumstances, conditions, events, mistakes, and miserable weather! My GPS informed me that the distance to Ft. Pierce was 800 nautical miles—as the seagull flies—but I knew my traveled distance would be much more—probably around 1,200 miles.

Monday 11/16—I got under way at 0745, after a good breakfast (essential), and had to anchor two hours later because I couldn’t get under the 35′ fixed bridge at Peck Beach. The tides were spring tides—big because of the moon—and anytime within several hours of high tide rendered the bridges impassable. IBIS’s bridge clearance is 36′, meaning I could not pass under any of these 35′ bridges until nearly low tide. Finally, in desperation, I partially lowered IBIS’s tabernacled mainmast to clear the bridge (her foremast is considerably shorter). It must have looked really strange, but I passed right under.

I wasn’t so lucky with the next (and last) one. Even with the main still partially lowered, the very tip of my foremast hit the bridge span (I was going very slowly), and I had to anchor and wait for a lower tide again. Finally, just as the sun was setting, I anchored in my old spot in the harbor at Cape May. My log book says it was a “long, difficult day.”

Tuesday 11/17—At 0650 I awoke to strong northeasterly winds and a dragging anchor. I motored forward and dropped my second anchor, a Danforth, after several attempts. The primary anchor is a Delta plow, and it doesn’t drag except under extraordinary circumstances—in this case, it had fouled on sea grass. The NOAA weather forecast was for northeast winds to 25 knots all day, with better conditions forecast for Wednesday. Because I was going to run up Delaware Bay (I had already ruled out the Delmarva Peninsula), I brought the dory on deck using fore & main halyards to lift her (see photos in previous post). I have always gone ashore in Cape May—a place I like to visit—but the conditions were so poor I just spent a lay-day at anchor. I even made granola cookies.

Wednesday 11/18—It took me a half-hour of abject misery to get both anchors on board (IBIS has no windlass, and I have a very bad back), but by 0800 I was motorsailing up Delaware Bay with the fores’l up, making about eight knots. The following seas were driving the autopilot nuts, and I had to hand-steer most the way. In order to have a comfortable seat out of the wind and rain, I stacked whatever I could find on the port/forward cockpit locker, and drove the boat using the autopilot controls (when possible). I think I will make a removable jump-seat in the future. 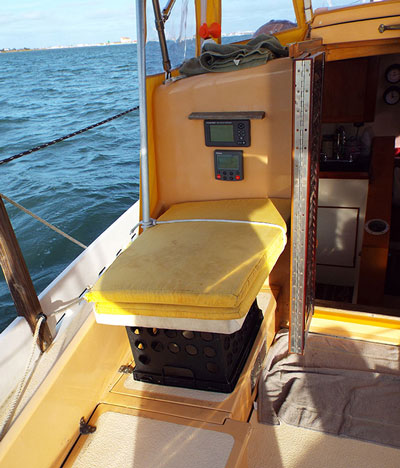 My makeshift seat for running IBIS by autopilot… under the protection of the dodger.

At 1320 I entered the Chesapeake and Delaware Canal, and at 1510 stopped at Jordan’s fuel dock in the Canal and filled my starboard fuel tank. IBIS’s Isuzu diesel is incredibly fuel efficient, and in three days running (22 ½ hours) I had burned only 17 ½ gallons. IBIS typically motors at 7 ½ knots, burning ¾ gallon per hour. This translates into 11 statute miles per gallon—better than many large cars and trucks! And this is pushing 14,000 pounds through the water, plus 36 feet of masts and rigging through the air—almost unbelievable efficiency.

Over many years of doing this trip, I frequently stopped for the night in Chesapeake City—the only harbor along the canal with an anchorage (and great restaurants). But because I still had some daylight hours remaining, I proceeded on to Cabin John Creek (also used before), and anchored at sunset in the best protection I could find. I left the next morning early, but the conditions were so terrible that I anchored soon after in Still Pond Creek. The wind was in my face, it was raining, the fog was pea-soup thick, and it was cold as hell.

Friday 11/20 0720—I weighed anchor and immediately ran aground on an uncharted shoal. After nearly an hour, I was back on Chesapeake Bay, motorsailing at 8.6 knots under fores’l and fast-idling diesel, on a beam reach. After another hour I was making 9.3 knots, with a helpful ebb tide. I had to hand-steer much of the day, because it was too rough for the autopilot—and it was still bitter cold out. I had been wearing long-johns since leaving Holiday Harbor, and would continue to wear them all the way to Florida! Miserable! But I’m a bred mariner. Life ashore just doesn’t cut it. Guess I’m a “hard case.” 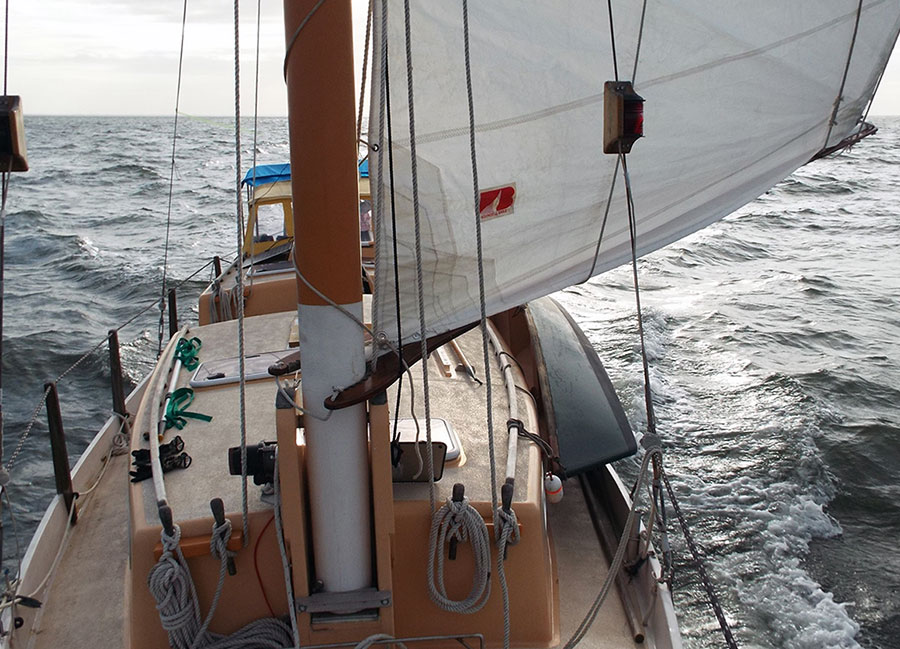 IBIS motorsailing under fores’l and diesel, steering herself when possible. Note the coiled fores’l halyard on deck—a single-hander’s trick

By late afternoon I was well down Chesapeake Bay, and the only anchorage available to me was at Solomon’s Island—which really has no anchorage at all. I tucked up into “the narrows” in the end of the harbor and dropped the hook on short scope. I got through a restless night waiting for the water-cops to come roust me out. 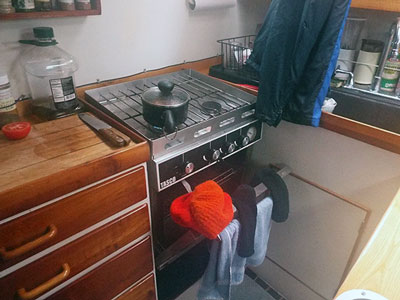 Saturday 11/21 0640—I weighed anchor, noting that it was colder than ever (below freezing), and motorsailed down the Bay for ten hours. I anchored at Horn Harbor, a pretty place I had never visited, but which had a somewhat tricky, long, shallow entrance.

Sunday 11/22—I awoke to light rain, and during my engine check found that the alternator wasn’t working. After troubleshooting, I found a broken wire (bad sleeve connector), which I repaired (I always carry an electrical kit with me). I also tightened the belt, which was a little worn and stretched.

That day I really got my butt kicked! The weather forecast was for northwesterly winds of 5 to 10 knots, so I was hugging the western shore for protection and fast passage… only the wind came out of the northeast at 25 knots with stronger gusts, putting me on a lee shore in shallow water. Some of the very rough, short, steep 4 to 6 foot seas had breaking tops, and IBIS was getting violently tossed around, making her very hard to steer. One sea broke onto her quarter deck (pooped her), soaking me with freezing salt water, and I actually felt that I was not really safe! In a long lifetime of going to sea, I have very rarely felt threatened by Mother Ocean. But in that situation—which I could not get out of—I felt myself and IBIS to be in real danger. Along that coast—for many miles—there simply was no refuge of any kind until Hampton Roads at the bottom of the Bay. 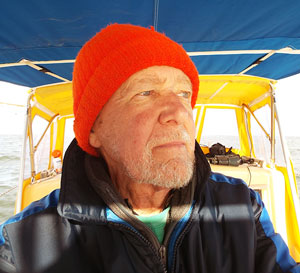 The author—cold and miserable, looking every one of his 70 years, and feeling older!

I could do nothing but hang on and steer with the nasty seas as best I could—a real workout. Chesapeake Bay can be really rough—it is long enough for big wind-driven waves to build with all that north-south fetch, and shallow enough to make them very rough; even breaking. And if current and wind are opposed; watch out! The south end of the Bay is like a funnel hanging a hard left into the North Atlantic Ocean, and over many years and many trips, I have had my butt royally kicked there, many times!

The only good thing was that we were going really fast—around ten knots—and we finally turned the corner into Hampton Roads, only to have rough seas and wind chase us all the way to downtown Norfolk. I anchored off the city marina to get my wits together and make lunch, and finally, at 1720, after waiting nearly an hour for the locks to pass me through, I tied up to the free park dock at Great Bridge, Virginia.

Monday 11/23—LAY-DAY! Shopping, resting, reading, having lunch at Panera Breads (excellent), just walking around on land. I had come perhaps a quarter of the way… and hoped the worst was over. (It wasn’t!)