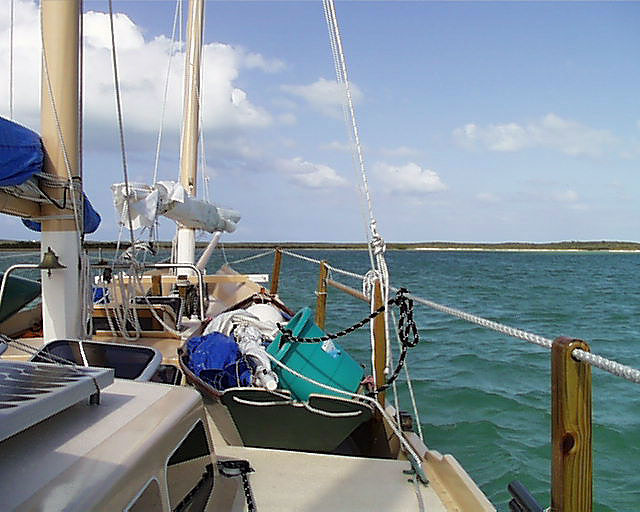 In very shallow parts of the Bahamas, places protected behind large islands and in “bights” (tidal estuaries and the lee-side west coasts of some islands), there are strange underwater formations I call “haystacks.” These are formed in soft “marl”—the white mud made from sand, calcareous debris and water—that often has a consistency such that sailors think of it as mayonnaise. In places where the marl is thick, large areas protected from sea and swell, the marl lies just below sea level and is covered with seaweed and sea grass. The roots hold the marl together in clumps which look like haystacks to me. They are frequently vertical-sided, and occur in groups, with tidal channels cut through them—like haystacks on a level field immersed in seawater.

The tidal channels can be confusing, as they often don’t run in straight lines, and often don’t carry consistent water depths. Damage to the grass and weed that holds the haystacks together may cause them to break down, allowing a new tidal channel to form. Sometimes a tidal channel among haystacks will make a sharp turn, or may simply disappear in a dead end.

T’IEN HOU’s maiden voyage commenced in early February of 2002. She was a brand-new boat, having only been launched that previous December, and I had a new first mate named Jenny Nelson. Jenny was escaping from a high-pressure job editing news stories for a major news show, and was ready for a cruise in the islands. We worked out T’IEN HOU’s “new boat bugs” on our way south from Ft. Pierce to Key Biscayne, from which we departed to cross the Gulf Stream.

We sailed to Bimini, thence to the northern Berry Islands (very shallow on the lee sides), where we took a kayak trip (I had a big two-person Old Town “Loon”) through tidal creeks and estuaries, paddling through several miles of haystacks and mangroves. After a big fish dinner at a restaurant in Great Harbor, with several strong rum drinks, we kayaked back over the banks west of the estuary with a beautiful full moon. The kayak trip was four miles each way, and next morning we had very sore muscles! 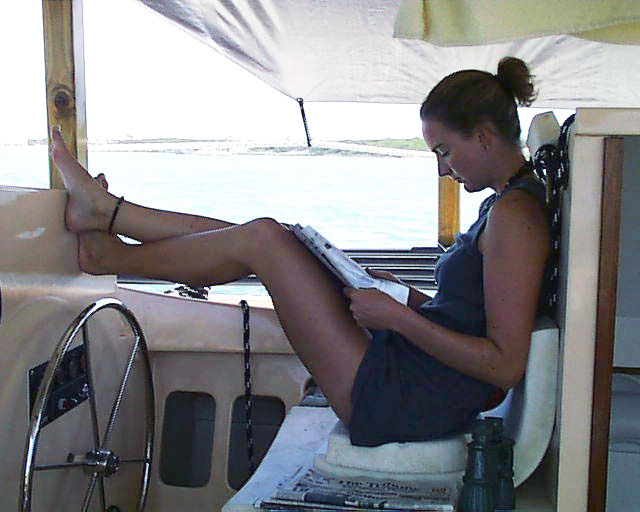 We sailed to Nassau and to the Exumas, and it was one of those typical winter seasons where the wind blew relentlessly, frequently clocking in circles with passing cold fronts. We had new boat hassles to cope with, one of which was that T’IEN HOU’s 3-cylinder Isuzu diesel was too small to make motoring dead into 30-knot trade winds practical. In one anchorage, at Norman’s Cay (one of my favorites), we had all three anchors out and still had to get out of there.

We eventually made our way to George Town, Great Exuma, where we re-provisioned and took on fuel and water, before heading to sea for Cat Island, an all-day passage to windward. From Cat we sailed northwest to Eleuthera and cruised along the west side before crossing at sea again to the northern Exumas. Jenny had been in touch with her boyfriend, and it was decided that he would join us back in George Town.

In persistent strong winds (25-30-knots), we cruised down the Banks behind the Exuma chain in semi-protected water. To get to Elizabeth Harbor (George Town, Great Exuma), one must go to sea, cruise for several miles close along a lee shore, and enter the harbor through a moderately dangerous channel at the northwest end. In strong winds, with a large sea and swell running, this can be dangerous, and many a cruising boat has come to grief trying it. Once you have done it, and know how, you must still take great care.

Because conditions were rough, and I was in a new boat with inadequate power, I elected to try something different. Staying on the Banks, I headed for the lee side—the southwest side—of Great Exuma. I had never heard of anyone doing this, as the depths are very shallow, so I had to try it! I found the backside “much larger and more mysterious than I had imagined,” according to my ship’s log entry for April 10, 2002. 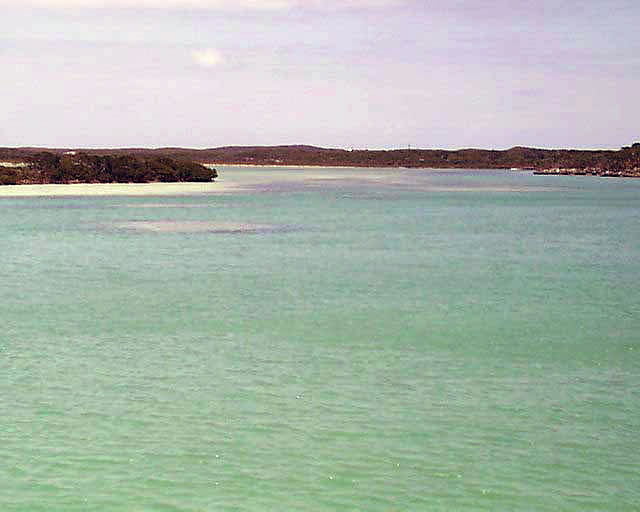 Haystack navigation on the back side of Great Exuma—anchored near Moss Town.

On 4/11 we worked our way in as close to the big island as possible, dodging haystacks and seeking continuous channels. Our plan was to anchor, launch the kayak, paddle to a small settlement (Moss Town) near the airport, and pick up Jenny’s boyfriend Hugh. Ah, the plans of mice and men…. The waters near Moss Town were so shallow that even the kayak couldn’t navigate them at any time but high tide! We persevered, often wading in 3” of thick mayonnaise, dragging the heavy kayak between us. Jenny walked to the settlement, got directions, and walked to the airport to meet Hugh, which turned out to be quite an adventure in itself (she was gone for hours).

Paddling in shifts, we made two trips back to T’IEN HOU, getting Hugh and his luggage on board, just catching the high tide. We moved T’IEN HOU to a new anchorage at the beginning of “the Short Cut,” and celebrated Jenny’s birthday. I was navigating in uncharted, unmarked waters, relying on Harry Kline’s wonderful sketch charts in Yachtsman’s Guide to the Bahamas. On the chart (below) you can see my anchor behind Moss Town. As we proceeded toward the Short Cut, a local bone fishing guide came along side and said “mon, what you doin’ wid dis big boat bok in here? Dis place is dangerous—you got to get out and bok in deep water!” I told him our draft was only three feet, and that gunkholing among the most remote places is what I loved to do. I asked him where Turtle Rock was (I needed some kind of landmark), and he pointed it out to us (see chart below). GPS (Global Position Satellite Navigation) was of no practical use to us in these waters. There were no charted waypoints, and the government-issued charts had no information whatsoever on shallow, remote locations such as the one we were in. These waters are uncharted and considered non-navigable. Other than this one brief consultation with a local man who was convinced that I had lost my marbles, we were on our own. Well—I did have Harry Kline’s guide book, but he really had nothing much to say about what I was attempting! 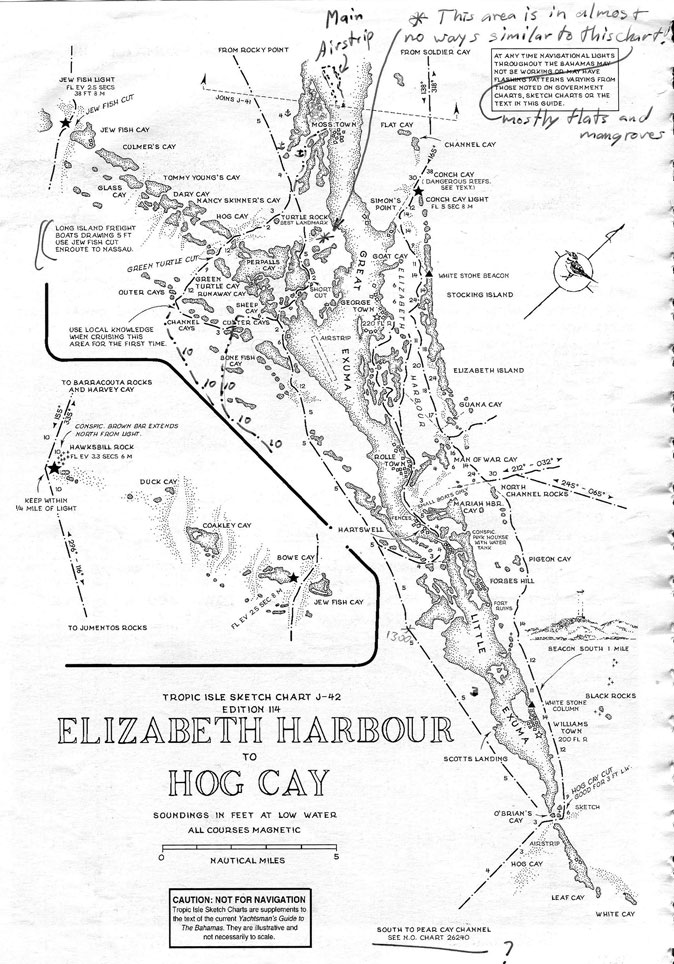 The sketch chart for the flats behind Great Exuma from Yachtsman’s Guide.

Pivoting on Turtle Rock, we found what I hoped was the Short Cut—we were in huge flats with marl, haystacks, mangroves and very shallow water. There was no text in the Guide, and the sketch chart above was all I had to go by. Water depths were so shallow that T’IEN HOU frequently bumped along the bottom! We came to one turn in the channel that was so tight that I got T’IEN HOU stuck between three haystacks trying to make the turn! 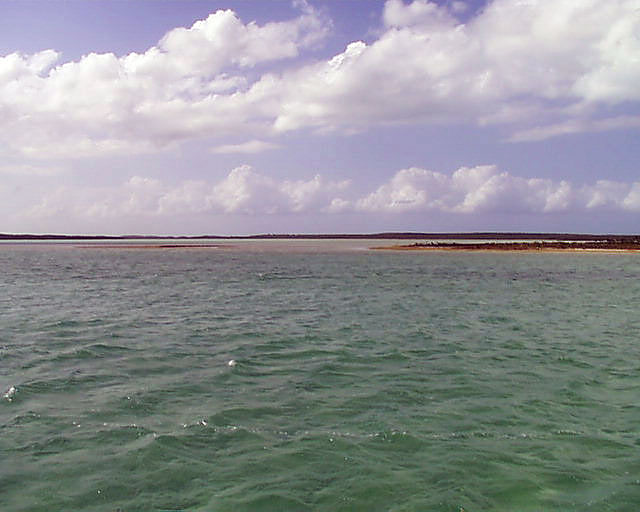 Harry Kline was a small-powerboat captain and talented artist, who loved all boats (especially traditional sail), and probably knew more about the Bahamas than any white man who ever lived. He created his cruising guide long before the advent of GPS, when navigating had to be done the old way—by compass, chronometer, dead reckoning, paper charts, a sextant, the heavens, landmarks and a very sharp eye. He went places no-one else would dream of going to, and his Guide has been my bible to the Bahamas for almost 35 years, because those are the places I love also. And when Kline says “use local knowledge,” I tend to pay strict attention!

Continuing our circumnavigation of Great Exuma, we found a good channel with some local markers (very unusual) that led between the Custer Cays, around Bonefish Cay, and back into the relatively deep waters on the Banks (see my inked-in channel on the sketch chart). We sailed east-southeast along the lee sides of Great and Little Exuma, enjoying flat water and strong, steady wind—perfect sailing conditions. We ran through Hog Cay cut, which barely carries three feet at low water, and sailed on a broad reach along the windward side of Little Exuma. This trip held excellent scenery, places I had never before seen, with brilliant water colors from light turquoise to aquamarine to deep blues, with very few houses, miles of perfect beaches, and small islands studded with palm trees.

With Jenny and Hugh hibernating in the foc’s’le (they hadn’t seen eachother for weeks), I ran T’IEN HOU out to sea at Pigeon Cay and entered Elizabeth Harbor at North Channel Rocks and Man of War Cay. It was rough, and a little tricky, but at 1655 on April 12, we were anchored back off George Town. I loved cruising the mysterious back side of Great Exuma, and I hope some day I get to do it again, taking more time to explore the most remote places.