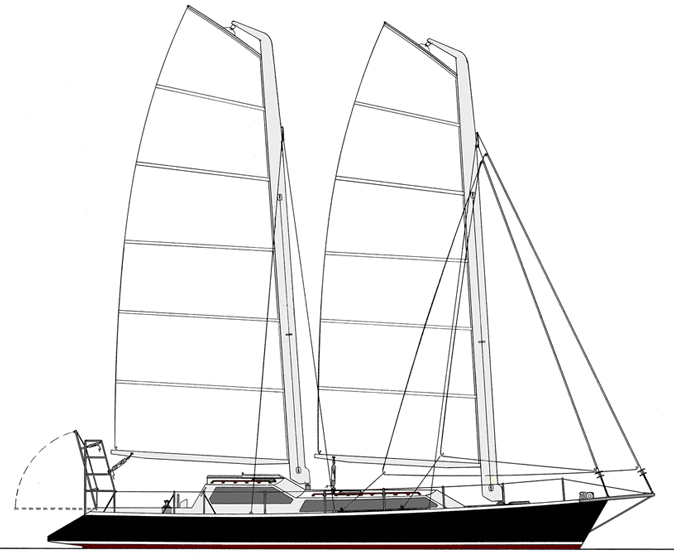 In 2003 I received a commission to design a 47′ aluminum schooner for a doctor in Australia, who wanted a fast, shoal-draft racer/cruiser. I designed new rotating wing L-Head masts for her, using modern hardware, winches and aircraft-grade plywood for the mast sides. The new masts, while based on my earlier low-tech L-Head masts for the Conch 32, were designed considering the conditions likely to be encountered in the Southern Ocean. I designed the schooner to ABS requirements for offshore racing yachts—all aluminum scantlings being carefully chosen for weight, dimensions and strength. We did a full hydrostatics workup to ensure self-righting abilities in capsize conditions. My engineer Tom Lokocz Adams collaborated with me on this project. I featured her in my article for Professional Boatbuilder Magazine on shoal-draft stability (issue #139), and included her in my IBEX session on the same subject in the fall of 2013. 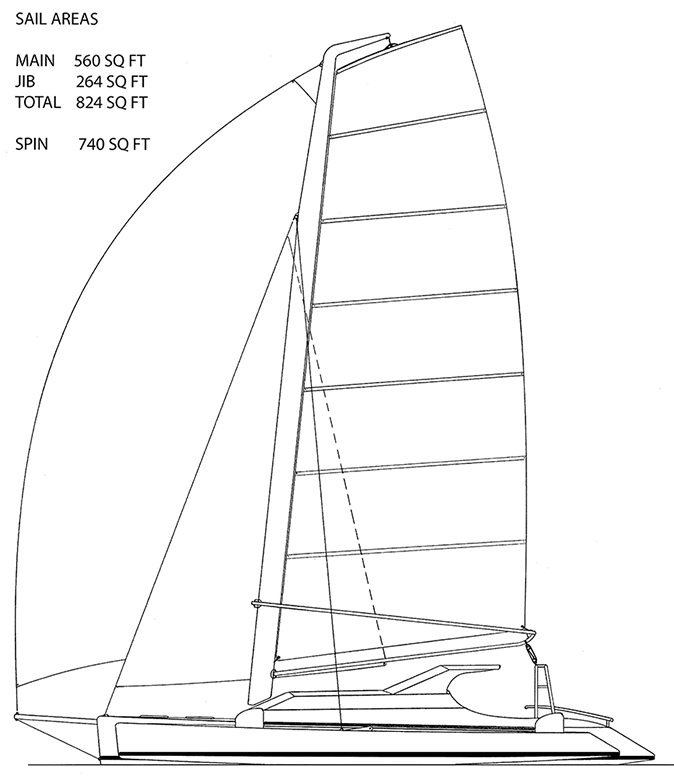 Sail Plan for the Trimaran 40.

I also designed my first multihull, the Trimaran 40, in 2003, and gave her a similar rotating L-Head mast. The prototype for this design is being built in North Carolina. I put weeks of work, and years of thought, into my trimaran design. I was especially impressed with the generous open space manifested in the interior and the cockpit. I have concluded that trimarans can be an excellent choice for cruising, and I wonder why I don’t see more of them. The design is complex and simple at the same time, and I drew many pages of detail drawings, creating one of the most thoroughly documented sets of plans in my portfolio (most of my designs being frankly simple and less thorough).

I had also been working on a “Basket Boom” concept (an aluminum wishbone with a bottom strut), which would be self-vanging, and would contain the sail and battens when lowered. A sail cover fits into the Basket Boom with a zippered flap to cover the sail when lowered. I later retrofitted the Basket Boom for my Australia 47 design—but first featured it on the Trimaran 40.

The L-Head mast, the fully-battened sail, and the laminated yard/gaff/head derive directly from the Chinese lug rig. Having been interested in Chinese Junks for many years, I researched the type as extensively as I could and then began designing Junk rigs, starting with two commissioned custom designs (the Scow 45 Junk in 1991 and Snowy Egret 39.5 Junk in 1994). A remarkable feature of the Junk rig is the ability, through a vast complexity of rigging, to completely control sail shape, including depth and location of draft, and vertical twist. The Chinese lug rig has both positive and negative aspects that are too involved to delve into here (perhaps in another blog?)—but what I was trying to achieve was an articulated wing of very modern design and construction that would epitomize the qualities of the Junk sail.

The primary purpose of the inverted L-Head is to support the large upper panels of an articulated bat-wing sail. The secondary purpose is to automatically align the mast to the sail, creating a continuous optimal foil shape. By adding a mast tiller at the base of my L-Head wing, the sail becomes completely articulated: twist and angle-of-attack can be totally controlled by using the sheet, L-Head, Basket Boom and mast tiller in concert with each other.

In 2012, after thirty years of study, observation and numerous failed attempts (on paper), I designed my first cruising catamaran, the Sharpie Cat 42. I also adapted my L-Head mast for the cat. 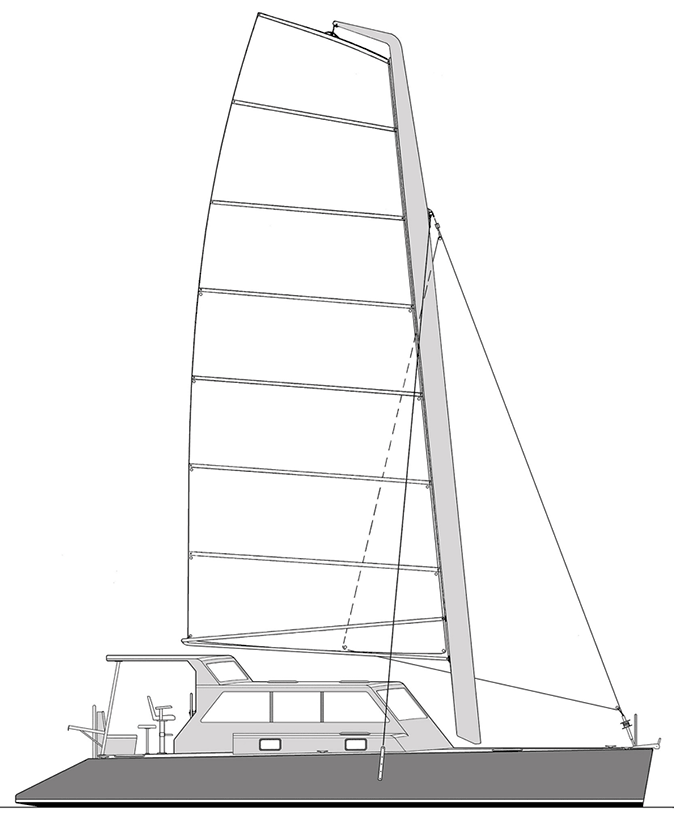 Sail Plan for the Sharpie Cat 42.

The mast designs for these three boats are very close, with dimensions altered to suit the individual requirements of each. I provided jumper struts and stays for the Australia design, and included them as an option for the multihulls also, as the wide stability platforms impose high loads on the mast despite the correspondingly wide shroud angles.

While I specified five-ply aircraft-grade 3mm plywood for the mast skins, it is possible that Lloyds-certified three-ply 3mm marine plywood will suffice. Quite frankly, an L-Head mast must be built and tested to know how strong is strong enough. In the world of racing, it is often said that “if you can’t break it, it’s made too heavy!” A certainty is that these masts will be very light. Again, as for my Conch designs, I eliminated the infamous “Jesus shackle” and replaced it with a system of five eyebolts supporting a rotating mast tang for attaching shrouds and forestay. I also incorporated internal halyards using Schaefer Delrin sheaves. 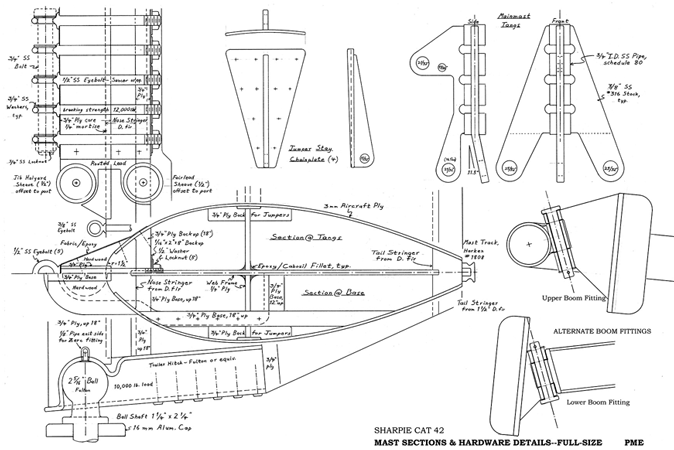 Mast design sections for the Sharpie Cat 42, page one.

I opted for Harken mast track and “bat-car” slides that plug into fiberglass full-length battens. Key West entrepreneur Sonny Eynman used this system on his charter version of my Exuma 52 design SUNNY DAYS (later sold to Danger Charters and re-named DANGER’S PRIZE). During sail trials for the new boat, he called us on his cell phone complaining that the boat was going 10.5 knots in 15 knots of wind—he feared this kind of speed would terrify his charter guests. When I inspected the new boat, I was very impressed with the Harken system, and realized it would make an excellent choice for a rotating wing. 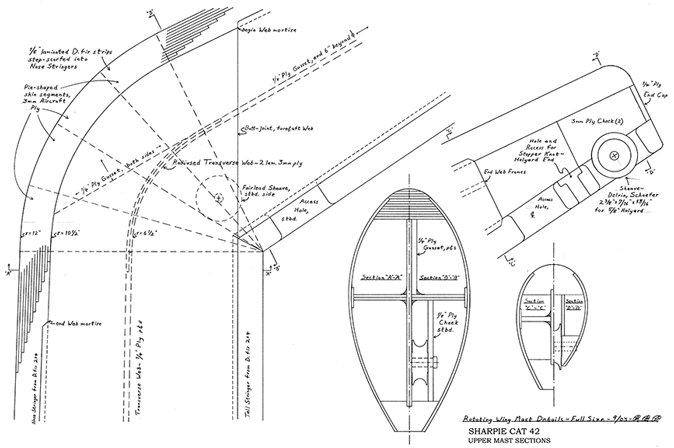 As I think about a sailing retirement home for myself, I am torn between my love of the gaff-rig schooner, with laced on sails—and a fast multihull with my L-Head mast. I am also tempted to build my Australia 47 design in cold-molded plywood instead of aluminum. I simply may have to build one of these three because no-one else is doing it, and I want to experience it first-hand!