From Thomas Clapham and the Roslyn Yawl 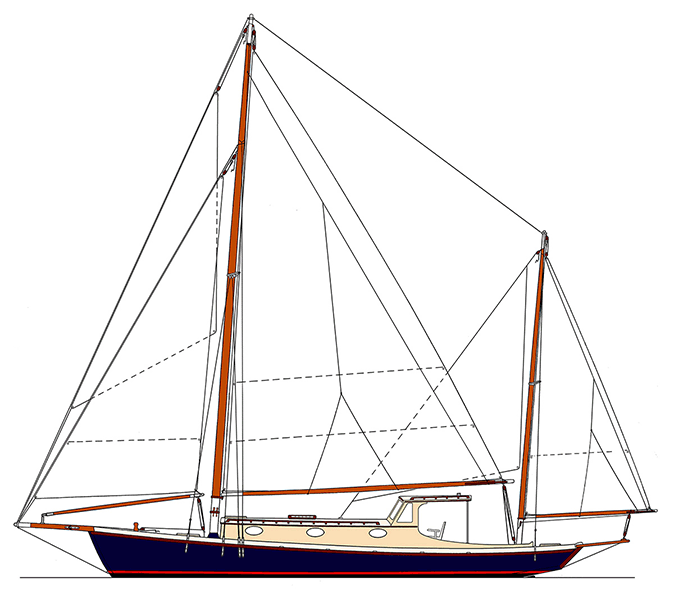 During my research on sharpies, many years ago, I was intrigued by the boats of a Long Island designer/builder named Thomas Clapham. In the late 1870s, Clapham developed a “new” hull shape he called the “nonpareil sharpie.” While traditional sharpies are flat-bottomed, a handful of innovative designers were experimenting with different hull shapes while retaining other sharpie qualities, which included a narrow beam-to-length ratio, light displacement and flaring topsides planking. Clapham’s contribution was the V-bottom, and he is often considered to be the “father of the V-bottom boat.” And thereby one of the fathers of the modern American sailing yacht, along with N.G. Herreshoff and Ralph Monroe.

While he didn’t invent the V-bottom (skipjacks, which had been around since the 1870s were basically V-bottomed), he developed it in a new direction by incorporating it with the sharpie hullform. Skipjacks are very beamy, with very little deadrise, broad sterns and very little V in their bows. They are not particularly seaworthy, and are not self-righting (they are workboats). Clapham’s “nonpareil” hulls exhibited considerably more deadrise, especially forward, were narrow and light, with the option of an external ballast keel (almost unknown in the 1890s). With outside ballast, Clapham’s designs were considered “uncapsizable.” At least one dramatic rescue of a wreck during a full gale was made by a Clapham sharpie in 1879, when no other vessel could manage it! 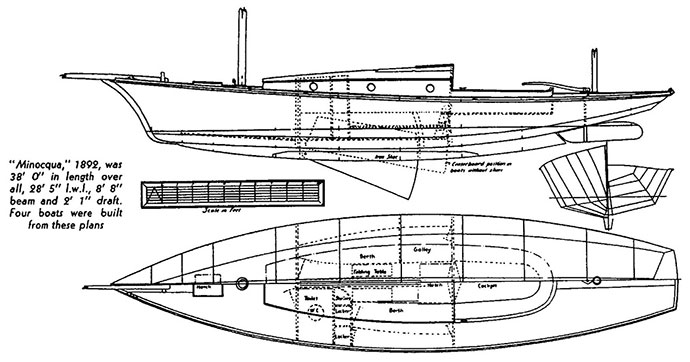 The drawings above and below were traced from the originals by maritime historian Howard Chapelle. Clapham’s sail plan for his new hull was powerful, and is strange to the modern eye—he called it the “Roslyn Yawl,” after his village on the north shore of Long Island, NY. 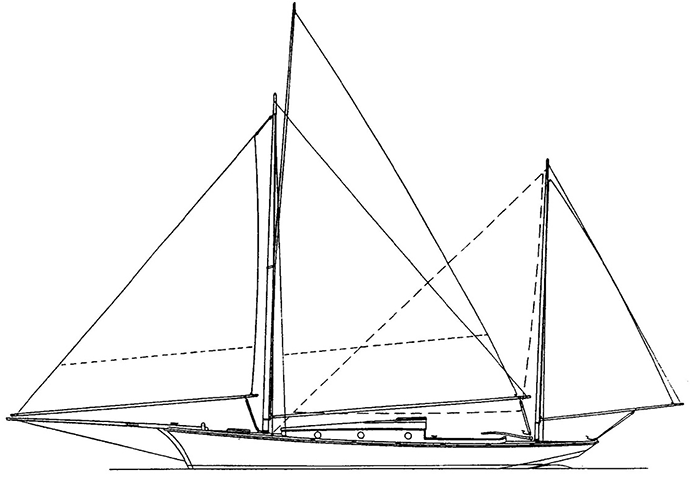 Clapham incorporated the “sliding gunter” rig for MINOCQUA’s mains’l, combined with an enormous boomed “jumbo jib” on a very long bowsprit, and a large yawl mizzen, with all sails self-tending. Clapham’s yawl-rigged V-bottom sharpies were very fast sailors, and were soon banned from racing, as nothing could catch them!

When I wrote The Sharpie Book, back in the early 1990s, I included the above drawings, but never developed the design for construction in cold-molded plywood, as I did for all the other historic sharpies in the book. Over the years, numerous readers asked me to complete building plans for MINOCQUA, and I finally got around to doing so in early 2004. I made a few minor modifications to the hull, cabin, interior and sail plan, and redrew them to a large scale, with construction drawings, notes, and details for building the boat.

The design continued to intrigue me, to such a degree that I re-drew the design again in 2007. I increased her length to 41-feet, and drew an optional new sail plan incorporating a gaff mains’l, with smaller jib and mizzen. The new design has 5′ 10″ standing headroom, and a more accommodating interior—adequate for live-aboard cruising. I included this design in my “Maxi-Trailerable” portfolio, as her beam is 10’, and her displacement is under 13,000 lbs, allowing the use of a standard 40’ three-axle trailer.

Then, in late 2014, while thinking about a version of MINOCQUA for myself (as a sailing retirement home), I tackled the design yet again. This time I gave her a moderate spoon bow, an optional pilothouse layout, a Marconi yawl sail plan, and a more elaborate interior plan with accommodations for five.

I mulled the new design over for weeks, and decided that she would stand up better to the higher-aspect sail plan if the hull carried more beam. Hence I further modified the hull, interior, cockpit, cabin and sail plan, and arrived at a new design inspired by MINOCQUA, but evolved into a new and different final result. 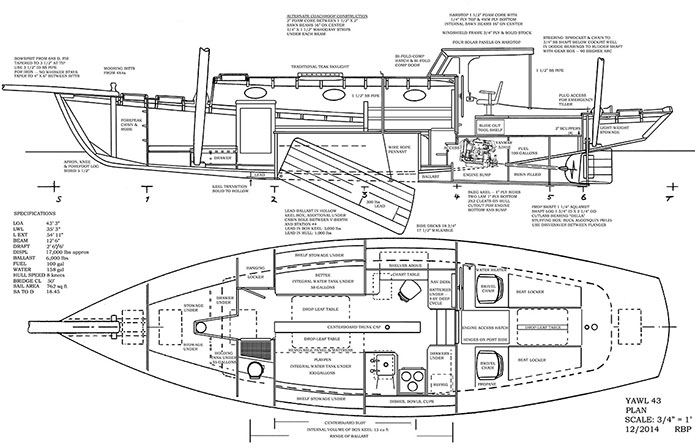 I increased the beam-to-length ratio, but I also modified the beam-waterline to beam-deck ratio, which slightly decreased the topsides flare. I flattened the run (lower quarter-beam buttock angle), flattened the deadrise slightly, increased displacement, and shortened the stern overhang by one foot. I also swept the sheer up aft slightly. I modified my fairly large Marconi yawl rig, with self-tending working sails plus light-air sails consisting of a jib tops’l and mizzen stays’l. The new design has a “Sail Area to Displacement Ratio” of 18.45 for working sails, and 24.81 including light air sails. With her increased beam and displacement, she will stand up very well to this higher sail plan, will be fast and weatherly for a centerboard boat, and will be very fast off the wind.

Her large pilothouse/cockpit provides protection from rain, spray and sun, with lots of room for above-deck living, including a large drop-leaf table. Her three-cylinder Yanmar, rated at 35 hp, will nearly give her motorsailer capabilities, with a comfortable cruising speed under power of eight knots or more (her hull speed is eight knots). She will easily exceed that under sail.

I designed optimized NACA 0009 foil-shapes for her rudder and centerboard, incorporating an end-plate for the rudder. I re-designed her keel to a hollow box shape, after the Sea Bright skiff designs from New Jersey, allowing lead ballast to be placed as low as if it were external, without the complications inherent in bolting an external ballast box to the hull. 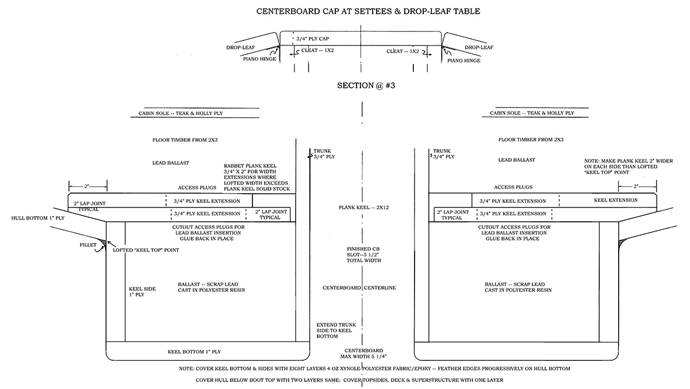 The hull is designed for simple marine plywood construction, covered with 4-oz Xynole-polyester fabric (two layers below the boot top). Decks are plywood over sawn beams, with a coachroof option of foam-core construction. Masts use a “new” construction method I developed and wrote about in Blog #14. Tanks are integral, and uncommonly large. 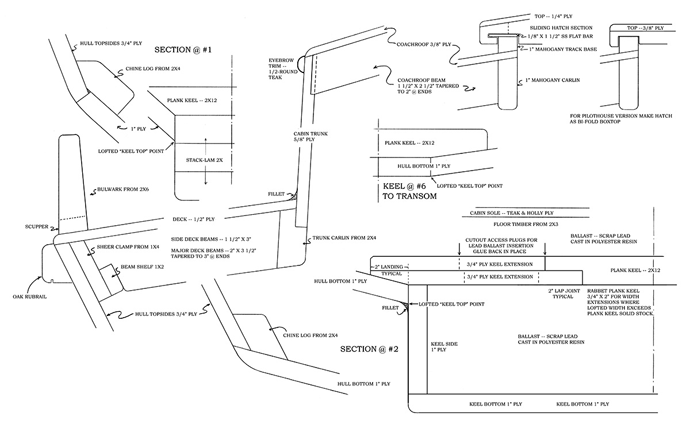 Because the new hull can support the schooner rig, I also designed a Marconi stays’l schooner sail plan. As much as I love schooners, I find myself leaning towards the yawl. 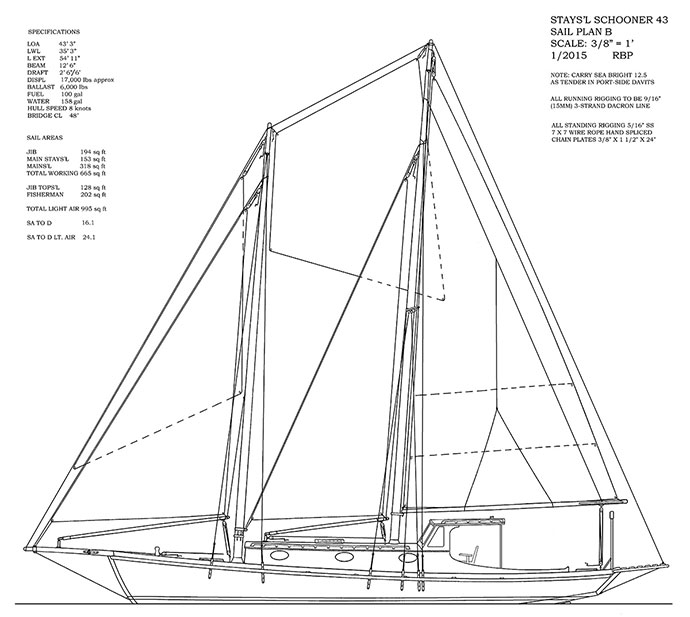 A stays’l schooner sail plan for the Yawl 43 hull.

Those of you who know maritime history will see the similarity of this design to the Sea Bird Yawl, an early 20th century design which evolved directly from Clapham’s work. In 1911 Thomas Day (founder of The Rudder magazine) sailed his 25-foot SEA BIRD across the Atlantic. Today, many people are critical of the yawl rig, and my own opinion is that they may be missing the point. Before the age of motors, when a single-handed sailor was hit by strong winds, he simply dropped and furled the mains’l. The yawl rig is weatherly and perfectly balanced under “jib and jigger.” The central location of the mains’l makes it easier and safer to furl—or to reef—than a schooner, cutter or sloop mains’l. Off the wind, the yawl rig performs very well under mains’l alone.

Clapham’s designs were famous for sailing dry, stiff and fast—in all weather conditions. The innovation of employing a deep “V” forward prevented pounding—the nemesis of flat-bottomed hulls. Flaring topsides and overhanging sterns provided reserve buoyancy and made for dry sailing. Clapham drew “perfectly fair segmental rockering” into his hull lines, using straight-grained pine battens, and the perfect diagonal line formed by the sweep of the chine minimized resistance and turbulence when heeled under sail, as well as improving tracking ability (the chine acts like a second keel). He was also one of the first yacht designers to make and test models.

So… will this design be my seventh cruising sailboat? My floating retirement home? Only time will tell. What do you think?