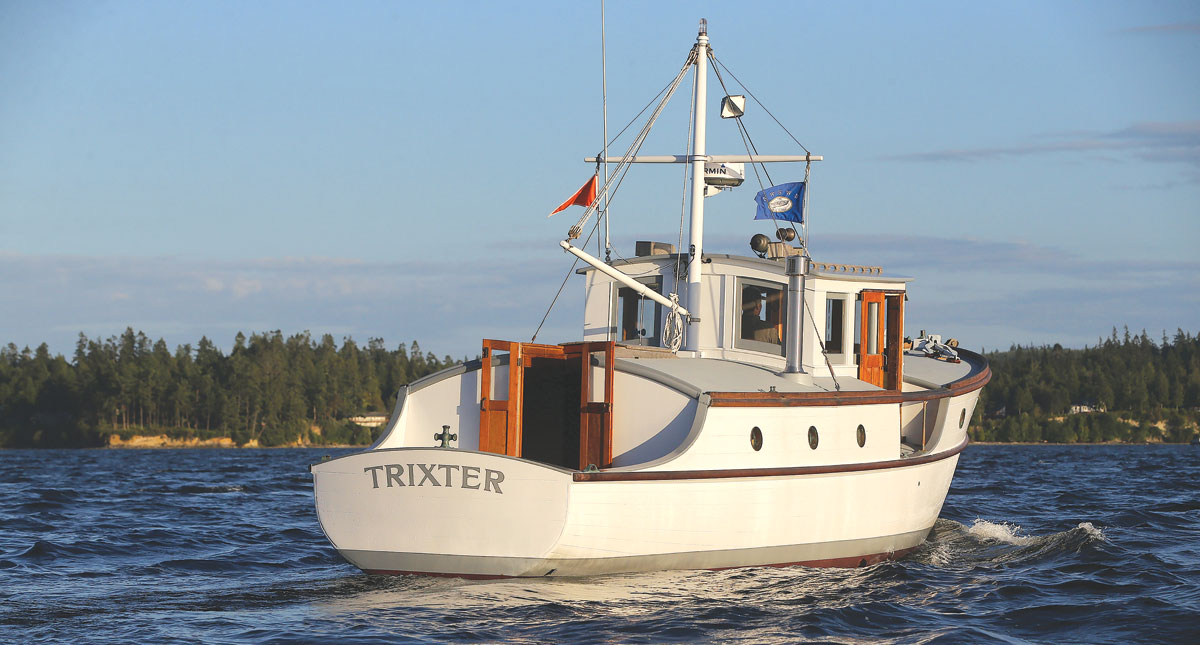 Harold Cornelius Hanson designed a proposed stock cruiser in 1926, but a boat to the design—with slight modifications—was not launched until 1934. TRIXTER was built by the Prothero & McDonald yard on Lake Union in Seattle, Washington. Her ample cabins forward and aft make her particularly well suited to adventuring around Puget Sound and up the Inside Passage, well protected from the elements.

TRIXTER, designed by H.C. Hanson, was launched on April 21, 1934, at the Prothero & McDonald boatyard in Seattle, Washington. The owner, Foster Gibson, would have been well known to both the yard and the designer, since he managed the Edison Storage Battery Supply Company, a vendor of marine batteries.

She is 35′ LOA, with a beam of 10′4″ and a draft of 3′4″, and is very similar to Hanson’s 36′ Stock Cruiser design of 1926, shown on page 30 of WB No. 258. She is carvel-planked with 1″-thick western red cedar over 1½″×2″ steam-bent white oak frames, using galvanized-steel fastenings. Her backbone timbers are of Douglas-fir, and her 2″-thick floor timbers are fitted on top of her frames, in West Coast fashion. The frames are spaced every 10″. The sheer clamps, which are made up of four layers bolted together, have total cross-sectional dimensions of 1¾″×8″.

According to a 1936 writeup in Pacific Motor Boat, Gibson “did a lot of work on her himself.” Her gear was exceptional for her times—the magazine called her “the last word in equipment and comfort”—including a Wilcox-Crittenden Sealoc head, bronze portlights, Hyde propeller, copper water tanks, Fullerlac glass, hardware by Elliott Bronze Company, and of course Edison batteries.

The Gibsons intended her for cruising and fishing on Puget Sound, both very popular pastimes in the 1930s. “You won’t find a harder worker in 48 states, yet he manages to do some boating and some fishing—but not as much as he would like to,” the magazine reported. When I purchased the boat in 2015, I was told that a subsequent owner had used her to carry mail between Puget Sound and Alaska for a time.

With few exceptions, mainly in her engine and systems, TRIXTER today is just as Hanson envisioned her, as Prothero & McDonald built her, and as the Gibsons experienced her during their cruises around the Sound. She has had very little alteration from the original. Her enclosed cabins provide ample protection from the elements, and yet her afterdeck provides a comfortable “back porch” during fine weather. She was called an “ideal type for Northwest waters” at her launching, and I couldn’t agree more. 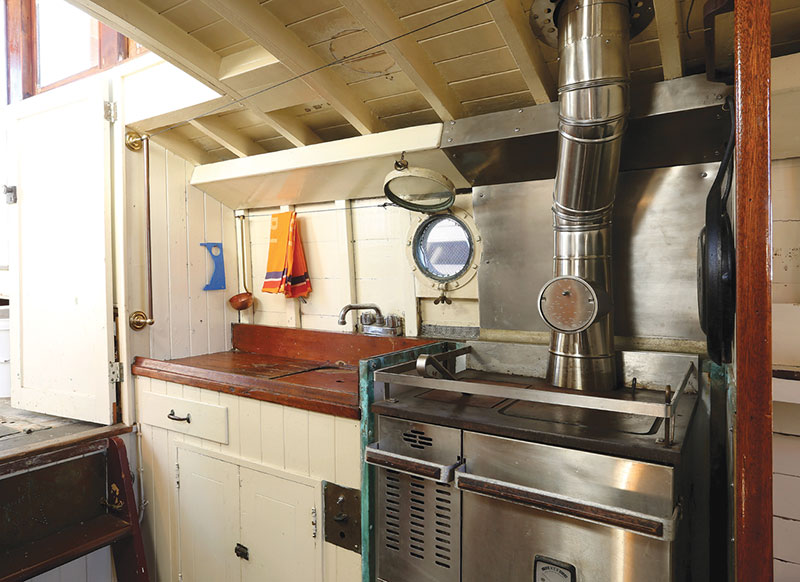 TRIXTER’s interior layout is simple, yet very functional. As seen here, her galley under the raised foredeck is no exception. To streamline the fuel needs, I replaced her original Olympic propane stove with a Dickinson Pacific that draws diesel directly from the main fuel tanks. 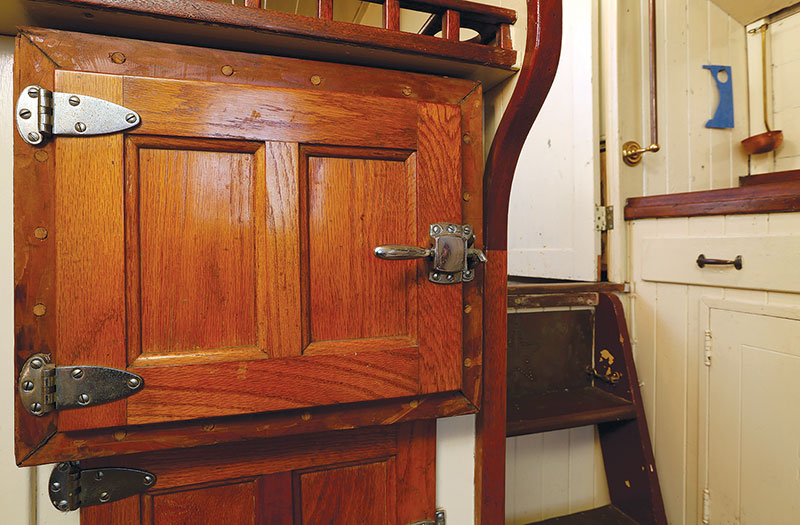 Just to port of the galley is the bar and ice chest. The mahogany bar is fitted out with storage for glasses and libations. The ice chest was originally cooled by an engine-driven compressor, but some years ago the compressor was removed. Still, the ample storage behind the paneled doors makes for reliable cold storage. 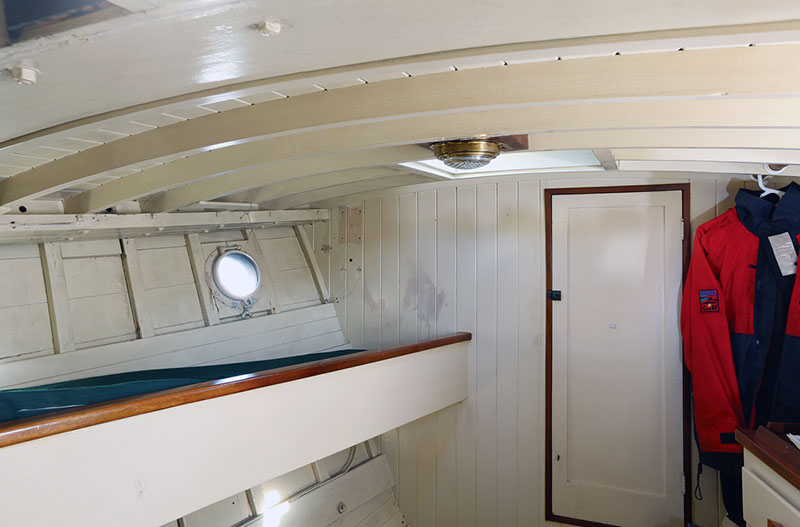 The forward stateroom has two bunks, and the other four are in the commodious after cabin. The forward bulkhead door visible here allows access to a locker that holds 175′ of anchor chain. This photo also shows TRIXTER’s robust construction: steam-bent frames are connected longitudinally by a four-layered sheer clamp and two hull stringers per side. 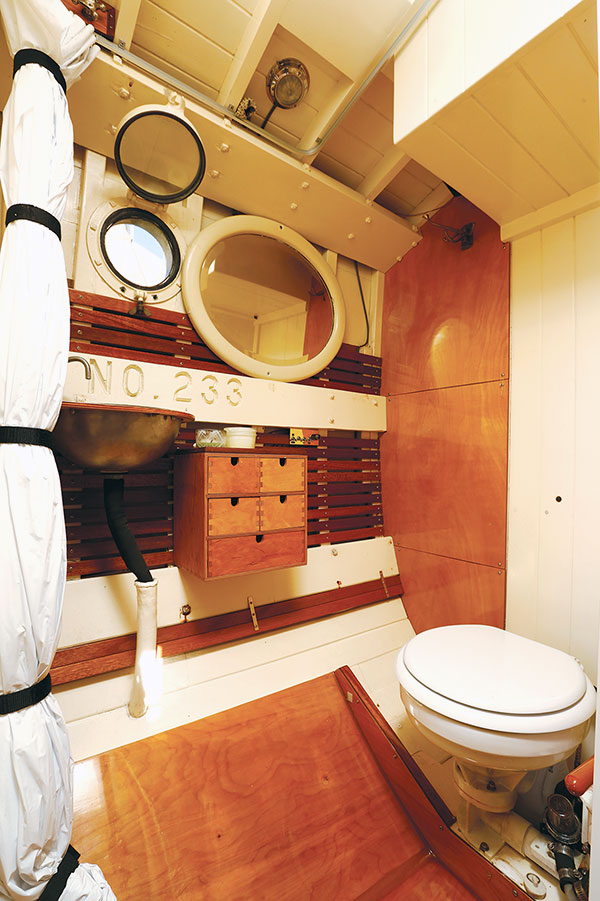 The original head has since been refurbished, but one of the stringers above it still bears the carved hull number. Hot water is pulled from a heat exchanger on the engine and stored in a 120-gallon tank below the afterdeck.

The aft cabin provides great shelter from Northwest weather. But H.C. Hanson sweetened the design by adding access to a small, open afterdeck that is great for crabbing, fishing, or barbecues. 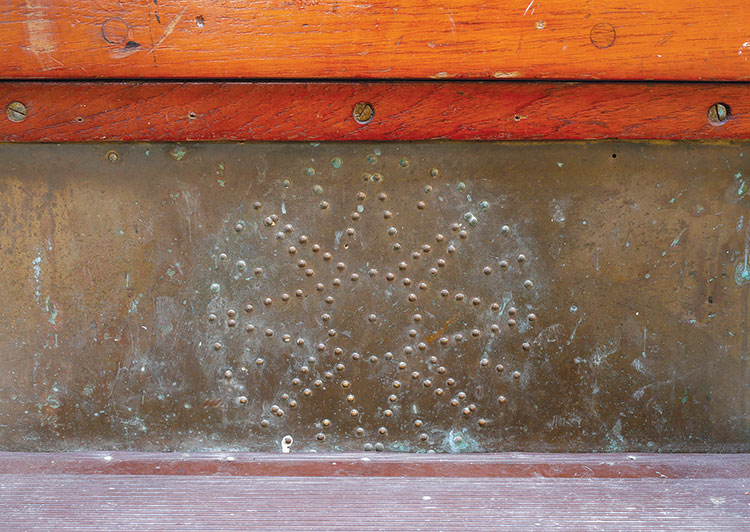 The metalwork on this companionway plate demonstrates the builder’s mindset during TRIXTER’s design and construction. Her functionality is layered with such ornamental details. 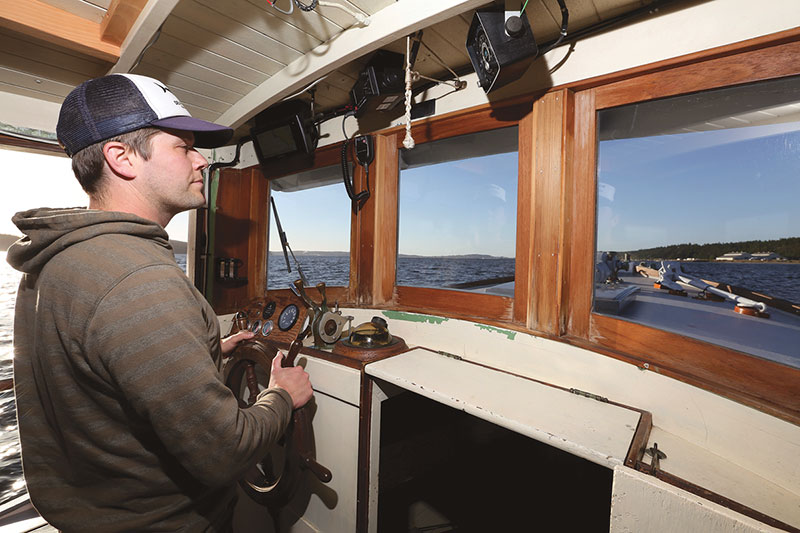 TRIXTER’s wheelhouse is modest but solid. Electronics upgrades have been the newest addition to the boat, especially a radar for transits of the Pacific Northwest’s sometimes foggy waterways. The gauge panel has yet to be finished, and it’s next on the list. 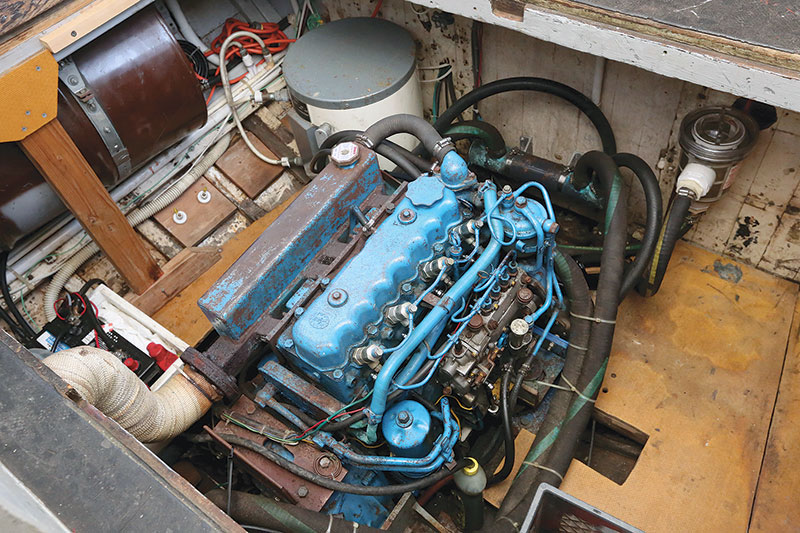 TRIXTER was originally powered by a 35-hp Palmer gasoline engine. She now has an Isuzu C-240 diesel, which like any old diesel requires attention but pays off in reliability. This diesel is very quiet, too. I’ve idled through many harbors only to have other boaters ask whether she’s powered by an electric motor.

Sean Koomen is the chief instructor at the Northwest School of Wooden Boatbuilding in Port Hadlock, Washington, and he moors TRIXTER at a marina nearby. He can be reached at sean@nwswb.edu.