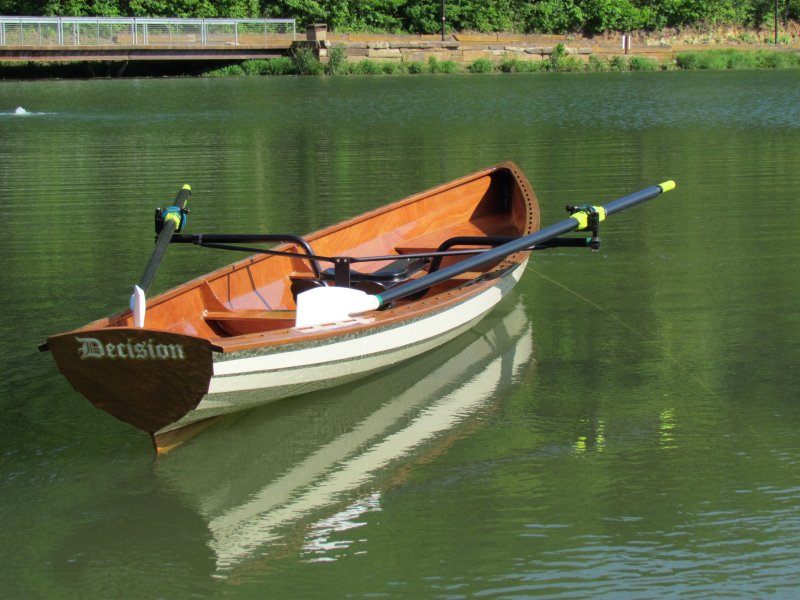 Thanks for the inspiration your magazine has given me to undertake a boat build. I started subscribing one month after your “Getting Started In Boats” section launched, and I have been a faithful reader of every issue since. I grew up near Galveston, had lots of friends with sailboats, and I learned to sail at SeaCamp in the Florida keys. However, our winds on Beaver Lake here in Arkansas are really too variable for much fun with sailing, so I decided to build a rowboat. I am a Pediatrician, but have recently been allowed to stop doing night and weekend call, so more time available!

My Annapolis Wherry, named Decision (After Frank Lloyd Wright's Organic Commandment, with the 4th one being "Decision: the virtue of the Will) launched April 6, 2019. The build took a year, unclear hours, but in 400-500 range. LOA 18′9″, Beam 38″, of mahogany and Okuome plywood. I added the inwale kit because it is the “ship-shape” thing to do, and really fretted over how to do eye holes for the bow painter. The designer is Chesapeake Light Craft, Builder (and photographer) was Tom Youngblood. Decision was launched on and is rowed regularly on Lake Atalanta (which is where these photos were taken) in Rogers, Arkansas, and sometimes on Beaver Lake nearby. I have a facebook account: https://www.facebook.com/tom.youngblood , with the build documented there, and available publicly.

I have been a woodworker, as a hobby, for many decades, but this was by far my biggest (though not heaviest), and definitely longest duration, project. This was also my first boat build. I thoroughly enjoyed all the many challenges that came up in the build, with lots of decisions to make along the way (thus the name). I am not a fan of all the sanding, but I agree with many other boatbuilder’s comments that once you have finished your first boat, you feel like you are actually about good enough to do it well! Part of the reason for the build is to give me a low impact way to stay in shape, and that is absolutely working very well.