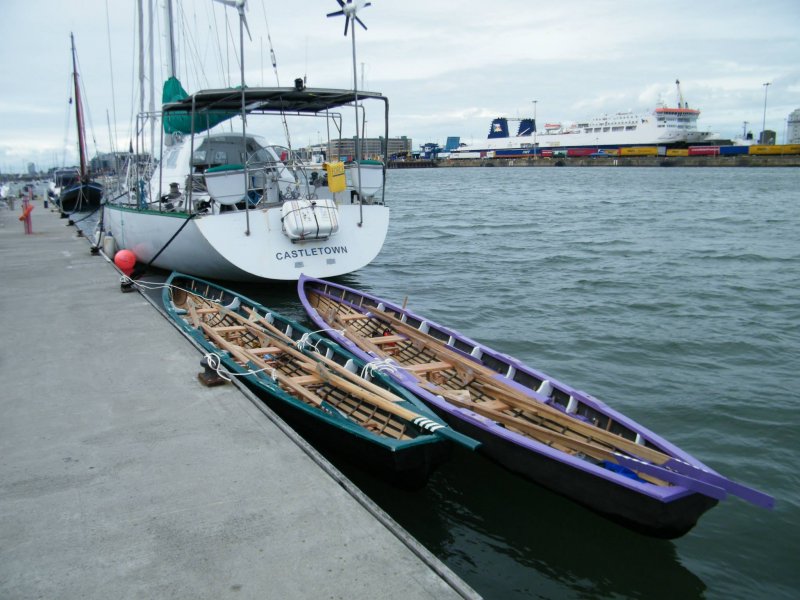 Two traditional Kerry racing naomhogs - a style of currach popular in Kerry but virtually unknown in Dublin - were launched into the Irish Sea on Saturday 27th September 2014 at 13:00 p.m. at East Wall Water Sports Centre.

East Wall Water Sports Group is a community-based and volunteer-led club which promotes all types of water sports including sailing, rowing, kayaking and rafting, and commissioned the two naomhogs to be built to be used by Cumann Curach Átha Cliath. These two new 4-seat rowboats add to its current fleet of west coast boats which includes two Connemara style racing currachs built by boat builder and artist Mark Redden & friends in 2012.

The naomhógs were built by Patsy Whelan, shipwright with Dublin Port Company, with the help of volunteers Danny Morrissey and Darren McGuinness.

Currachs are traditional Irish rowing boats with a wooden frame, over which animal skins or hides were once stretched, though now canvas is used. Characterized by oars without a paddle in the water, currachs were once used exclusively for fishing and transport, but have evolved into a community racing sport in the west of Ireland. The Kerry Naomhog has a reputation for elegance and speed and is set apart from the currach traditionally; by being fitted for holding a short sailing mast and lug sail, by framework design; in having a lifted and narrower stern and in more recent racing specifications; by having four seats instead of three of other currachs.

Cumann Curach Átha Cliath, the currach rowing section within in EWWSC, was formed with a view to introducing the West Coast of Ireland tradition of rowing currachs and naomhogs to those living in Dublin. All are welcome to try it out, from absolute beginners to pros. The rowers take to the water from the EWWSC, just off the Alfie Byrne Road, Eastwall, Dublin 3, Ireland.

Some of the rowers of the club will compete in regattas in Cork, Kerry, Clare, Galway and Donegal next season. The team will be featured as part of a 4-part series being filmed by Maeve McAllister of Imagine Films for TG4 on Irish-speaking, currach-rowing women of Ireland to be broadcast in the spring of 2015.
.