The 46′ lobsterboat RESOLUTE stands ready for launching at John’s Bay Boat Co. in May 2014. 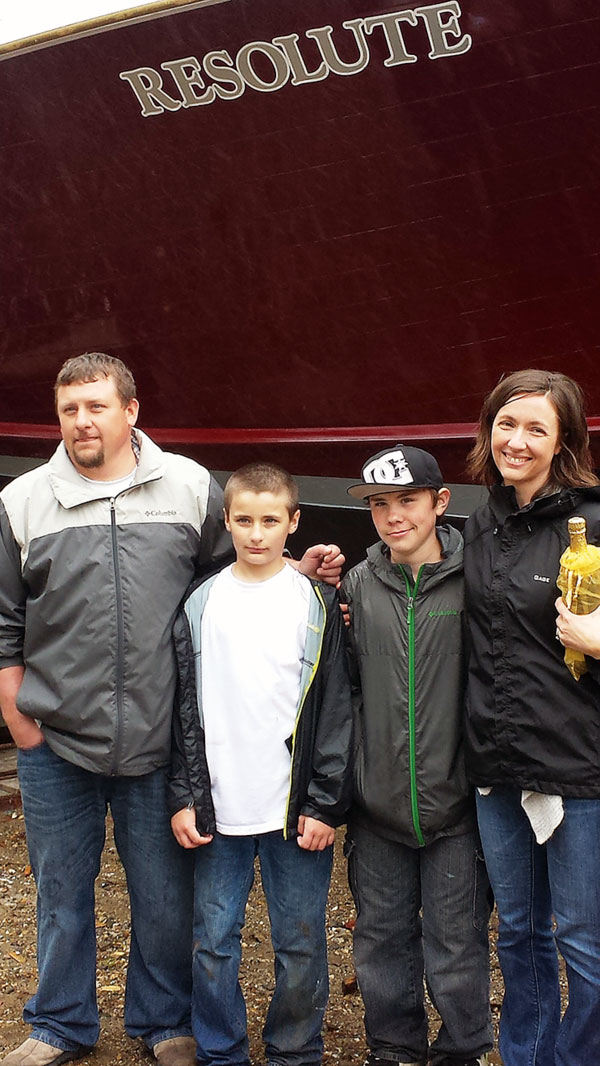 Ryan Larrabee and author Jennifer Eaton Larrabee await the moment with two of their children, champagne bottle at the ready.

In August 2013, Peter Kass began building our lobsterboat, RESOLUTE. His shop, John’s Bay Boat Company, is located at the end of Poor House Cove Road in the small town of South Bristol, Maine. A first visit to the place can be disorienting; in fact, you might think you are lost. A small wooden road sign is the only indication that you might be on the right track, and the narrow dirt road makes you pray that no one is coming from the other direction. A steep hill hides a workshop below, but at the end of the road, perched on the edge of Poor House Cove, sits the the birthplace of RESOLUTE.

We live two-and-a-half hours east of South Bristol, in Stonington. Peter is something of a legend here. Our small town has more Kass boats than any other, in use exclusively for commercial fishing. We were first introduced to John’s Bay by one of my husband’s mentors, John Williams, a fellow lobsterman. At the time, John was having his second John’s Bay boat built, because his first one had reached 17 years of age and his wife, Judy, had surprised him by putting a deposit down for another. “He deserves it,” she told me.

Peter launched John’s beautiful KHRISTY MICHELLE in 2012, and up next was Ben Weed’s EMMA AND ANDREW, launched in 2013. Ben was only 27 years old when his boat was launched, and he’s part of a lovely trend of younger fishermen building wooden boats to extend their careers by reducing the toll commercial fishing can take on a body. I have been told by more than one that their Kass boat has saved them from knee or back surgery—common occurrences among fishermen. Most fishermen who work from wooden boats swear by the comfort of these hulls, which don’t transmit engine vibration the way fiberglass ones do.

With the launching of EMMA AND ANDREW, our two-year wait was over. When construction of our boat began, we decided that we would visit the shop once a week to watch the progress. Our children were young, and we wanted the project to be a family affair. Our first visit, however, initially seemed underwhelming: The keel and the horn timber were in place, but little else suggested a boat. Then we discovered the framed-out transom, which was a little more exciting; it looked enormous compared to our tiny children, who ran excitedly through the shop touching everything—a wooden hammer that looked like a giant could use it, more clamps than I have ever seen, and chairs on wheels that my sons deemed appropriate for racing each other. In an effort to settle them down, I requested a photo. We stood by the horn timber, and I asked them to put their hands on it. As I began to snap a photo of little hands touching timber, I felt something for the first time. Our boat was coming to life: She was barely framed, but when those tiny hands piled on her she seemed to respond. I am not ashamed to admit that tears filled my eyes: We were touching the very thing that would carry us through the next stage of all of our lives, both physically and metaphorically.

Every week we packed the car full of children and made our trek to South Bristol. Our only stop was a bakery at the midway mark, for cinnamon doughnuts and other baked goods for the shop crew: Jeff Hanley, the wiry young family man; Andy Dickens, the resident freshman who gets teased relentlessly (I am not sure he minds it, though); and Sam Jones, who has since partially retired. 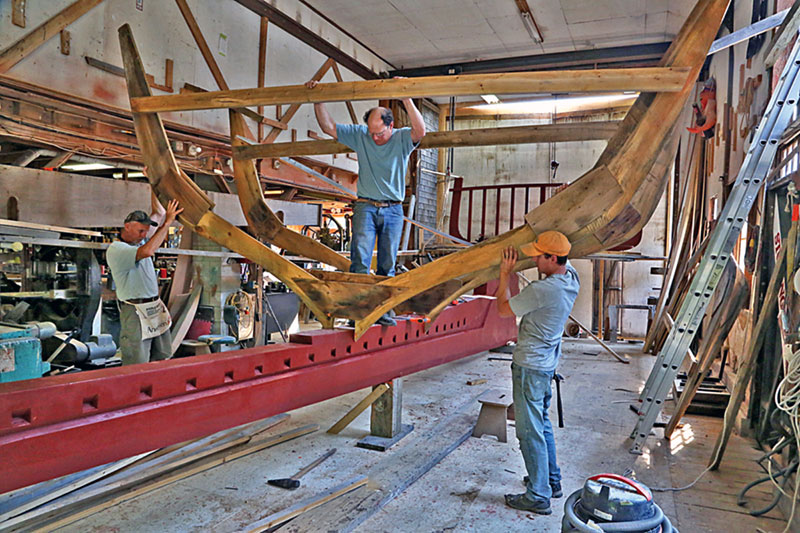 Sam still holds a special place in my heart. He is the shop philosopher, and he explained to me the living being that a wooden boat can become. Every lunch break the crew all gather around the woodstove in the center of the shop. Each lunch conversation begins with a good ribbing for Andy. It then progresses to stories about Jeff’s wild young sons, to which we can relate. The meal almost always ends with words of wisdom from Sam.

This woodstove, smelling of cedar, was the backdrop for the poignant moment Sam measured my worth for owning such a prized vessel as the one we were building. He told me that trees are living beings. They give themselves to the builder, and come into the shop naked and without form. The builder pours every ounce of himself into these planks. He lays his hands on each inch of this boat, and lovingly bends and forms wood into a work of art. As he spoke, Sam paused to look directly at me, and only when I nodded my agreement did he continue.

The sweat from the brow of the builder fuels the boat and she responds, he said. They give to each other, the boat and the builder. Then the day comes that the boat is complete. That day is only sad for the builder, he said, if she is going to an owner who cannot reciprocate the care the boat is willing to give. Her connection can be transferred to any owner who is capable of appreciating her. I am fortunate, he tells me, because Ryan has participated in the build. He has made his connection already, and he has passed Sam’s test. 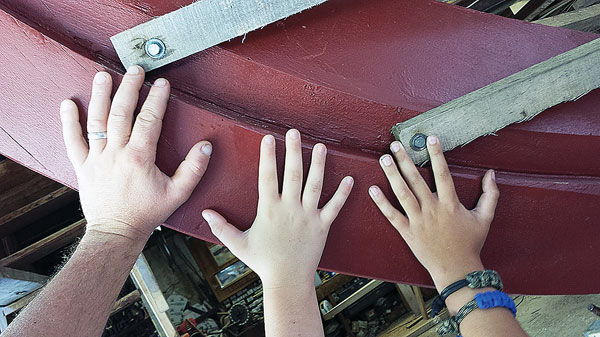 RESOLUTE seemed to come to life as hands touched her timbers.

I was not confident that I had met Sam’s measurements, but I knew I would try.

Weeks went by, and on every visit we observed more and more progress. Peter Kass himself taught my children how to mix epoxy and meticulously place each wooden bung in her hull. They will never forget that experience. Peter’s interactions with our children made them love the vessel. His passion for boatbuilding poured into them as he patiently oversaw their haphazard work, directing them to take caution and align the grain of the bungs with that of the planks.

Sam and I decided to work together on the impossible job of choosing a name. My only requirement was that it reflect the work Ryan had done to achieve his dream of owning a John’s Bay boat. I spent weeks poring over a book of historical boat names that Sam sent me. Sam later called me with what would be his final suggestion: RESOLUTE. It had been pre-approved by Peter, which was not a requirement but we felt as though it should be. We unanimously decided that would be her name.

As RESOLUTE began to take her final form, her glowing maroon hull grew in beauty. We admired her more on each visit, and the anticipation began to build. The children had learned to climb aboard her on their own, on Peter’s old ladder beside the woodstove, and they ran into the shop each week to measure progress for themselves. We admired their growing interest. One stood at the helm, pretending to steer into murky fog, while another pulled on imaginary lines to set her free from the dock and send her into dangerous seas. They rolled on rough oceans and ducked from sea spray. All the while I knew that RESOLUTE loved the children already. She knew who they were, and knew that this is how children celebrate their love for any vessel.

Launching day arrived. A torrential rain began that morning, dampening our excitement. The kids ran into the shop, now empty as our vessel sat waiting for her freedom in the launching area outside. We all swept away cedar sawdust from the shop and created banquet tables using sawhorses and sheets of plywood—making them formal with table linens from the coveted collection of Nina Kass, Peter’s wife. Former boat owners, friends, and family soon gathered at Poor House Cove to admire the newest member of our family. Keeping with tradition, the shop crew erected a set of wooden stairs next to the boat. 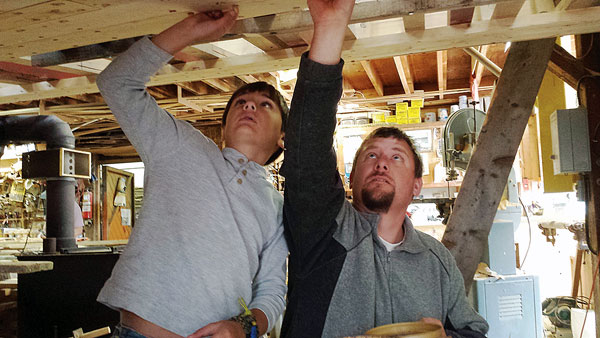 A lesson in setting bungs: RESOLUTE’s construction was a family project, and everyone pitched in and learned during weekend visits to the shop.

Visitors are allowed to inspect each boat before its launching, and everyone began to pour aboard. Comments and compliments flowed, and then the visitors exited to enjoy the gourmet assortment of food that arrives, almost magically, at every John’s Bay launching. Each lobsterboat captain brings the same dish every time: fresh doughnuts, smoked lobster dip, stuffed haddock, and seafood chowder, to name just a few.

At the precise moment, dictated by the tide, Peter motioned that launch time had arrived. As the multitude exited the shop, the heavy rain became a mist, and the sun began to peek through. The blessing of a boat is a brilliant tradition, and ours was given by the Rev. Ted Hoskins. “We are thankful that Ryan and Jennifer had the dream to build a boat, that they had the courage to do it, and that they had the wisdom to choose Peter Kass to build it with them.” Ryan climbed on the bow and thanked those present. My husband is a fully self-made man. He has had mentors in his life, but has built his dreams with his own two hands. RESOLUTE, resting and ready for launch, was a true expression of this.

All other observers stepped off the boat, leaving only my children aboard with their father before RESOLUTE slid down the ways. Their excitement at the honor their father had bestowed on them, allowing them to be the only ones who would ride during the launch, was palpable. A gravity-powered launching is an impressive mastery of timing and physics. Peter gave me a nod and he pulled the lever to release the 46′ vessel at the exact moment I christened the boat and, much like the birth of a child, nature took over as 48,000 lbs of cedar and oak slid down the wooden ramp and into the waiting cove. The stern entered first, generating a sizable wave. I held my breath, waiting for the signal that everything was as we hoped it would be. The boat gave me the signal; she responded immediately, swinging her stern out on the captain’s command. Their connection was instant and visible. A massive cheer erupted from the crowd, as though everyone present recognized the culmination of a dream fully realized.

As Ryan brought the boat alongside, I ran down to the dock, eager for the first ride. Family and necessary technicians were waiting, too, but my husband grabbed my hand first and pulled me aboard. As I watched my loved ones and our new family of builders climb aboard and set their feet on RESOLUTE’s platform for the very first time, I felt a page turn in our life book. I watched Ryan laugh with pride, and Peter grin quietly at the success of another beautiful boat heading to Stonington. We had not come to the end of a build, but rather to a new beginning. It was a beginning filled with the promise of our family being protected by a safe and sturdy vessel, our new homeport in any storm.

Jennifer Eaton Larrabee is a freelance writer and a fisheries advocate who lives in Stonington, Maine, with her husband, commercial fisherman Ryan Larrabee, and their four children.