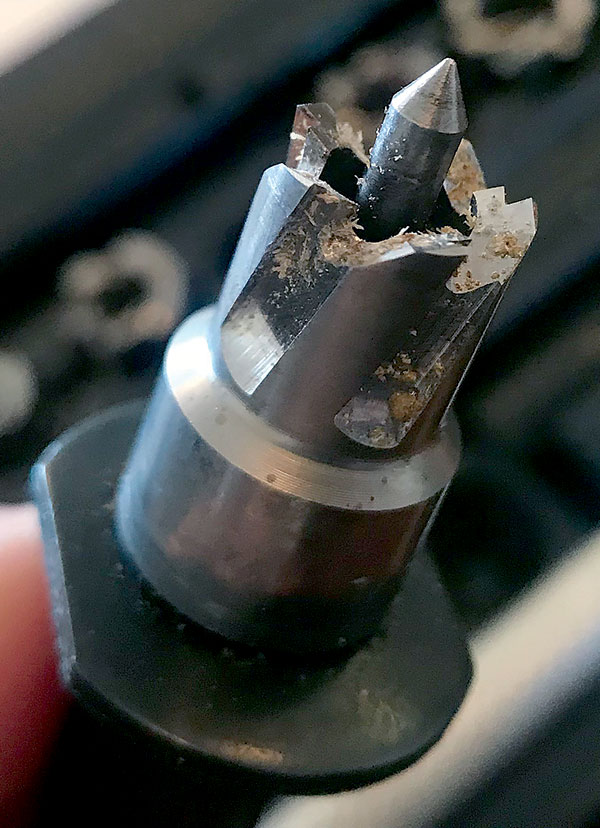 As the cutter gets close to the fastening below, both the tip bevel of the tiny blades and the spring mechanism of the pilot pin prevent damage that might make the fastening difficult to remove.

The prospect of removing fastenings in order to perform a boat repair is the proverbial box of chocolates—you never know what you’ll find. Will the screw be frozen into place? Will the head crumble into pink dust and disintegrate, creating the need for drilling and using an EZ-Out screw extractor? But before you get to that stage, you have to get to the screw. Most painted hulls will have the counterbored screw holes filled with some sort of surfacing compound or petrified putty. This stuff can (usually) be successfully extricated by way of cautious work with an ice pick or small chisel and mallet. The result can be a bit ragged, but not problematic, since the resulting cavity will be filled with putty again.

But what if the job involves removing bunged fastenings from a cherished, varnished, and expensive mahogany hull so that you can replace a few frames? Picking away at a batch of bungs with a probe can be a slow and meticulous business, and there is no guarantee that you’ll preserve the sharp edges of the original counterbore. Dinging those edges can endanger the look of the new finish when it goes on over the repair bungs. Hervey Garrett Smith recognized this in Boat Carpentry, his 1955 classic tome on repair.

Smith admonished his readers not to peck at the bungs “like a termite.” Instead, he suggests, “Cut the head off a steel wood screw, No. 12 or No. 14, and put the screw in the chuck of your hand brace. Center it carefully in the bung and screw it SLOWLY. When the point of the screw fetches up on the head of the fastening (below), the bung will be eased right out!” Maybe. But that was before everyone started cementing things in place with epoxy, and attacking the finished planking on a classic Chris-Craft with Smith’s brace-mounted mini-auger could damage the surrounding planking. Surely there must be an easier way.

Enter the Rotabroach Sheet-Metal Hole Cutter made by the Blair Equipment Company. Maynard Bray tipped us off about it, as he had recently been treated to a demonstration by Bob Vaughan, owner of Seal Cove Boatyard in Brooksville, Maine. “I was so impressed that I ordered a more basic and less-expensive version for myself,” Bray said. “Although I’ve not had a chance yet to put it to the test of repeated bung removal, it has worked fine for the few bungs I’ve tried it on. I think it’ll be a wonderful timesaver and do the job better than any other tool I’ve seen.” 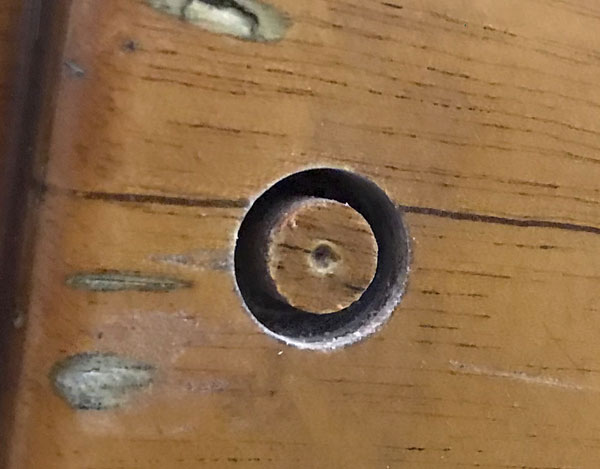 The Rotabroach hole cutter allows easy, precise bung removal. It leaves counterbored holes with clean, sharp edges; when replugged and bright finished there is no evidence of repair.

The Rotabroach cutter consists of an arbor with a spring-loaded pilot pin onto which a series of hollow, precision cutters can be attached. The kit we tested included seven cutters in various diameters—⁵⁄₁₆″, ⅜″, ⁷⁄₁₆″, ½″, ⁹⁄₁₆″, ⅝″, and ¾″. The arbor easily fits into a conventional cordless drill.

When one uses the included center punch to get the cutter properly started, the manufacturer claims, the tool will easily cut precision holes in stock up to ½″ thick, including mild steel, stainless steel, or aluminum. I tried it with success on steel roofing, galvanized 26-gauge steel, window plexiglass (be sure to back up the sheet), and it will even produce classy drain holes in the Schedule 40 sewer pipe you use to make a wood steamer.

But where the tool really shines is in its unintended role in removing bungs or counterbores filled with compound. It produces clean, sharp-edged, bung-sized holes that allow easy access to the fastenings below.

Like the more familiar holesaw for wood, the Rotabroach cuts around the edge of the hole. Unlike the conventional holesaw, which uses a center drill bit to produce a circular wooden “doughnut,” the centering point of the Rotabroach cutter is spring-loaded. The tool acts like a high-quality plug cutter, and the resulting core centered over the fastening looks a bit like a mini volcanic neck with a mere dent in the top. 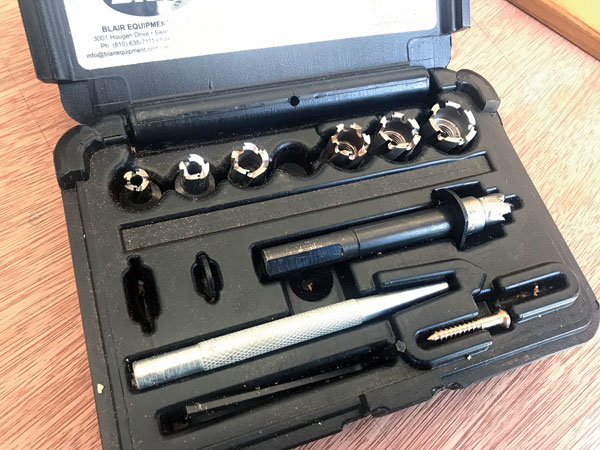 The set shown includes cutters of seven different imperial diameters (they are also available in metric sizes), a center punch, an arbor with a spring-loaded pin, a hex wrench, and spare pilots.

Before starting a bore, use a punch to give the center pilot a point on which to track. Then, allow the cutter to slowly establish a groove before applying full, but not too much, drilling pressure and speed. It’s best to do a few trial runs before attacking the project at hand. In short order, the cutter will reach the fastening, slightly squaring off the edge of it but leaving the driving surface (slot, Frearson, or square drive) uninjured. Pop the center core out of the hole with a screwdriver, and you are in business.

The operation is every bit as fast and accurate as it sounds. And the result is a series of crisp, countersunk holes that are as good or better than the original ones, ready to be filled by either a wooden bung or compound.

There are a few caveats about using this tool. To wit: Before boring, test to make sure your bung cutters are cutting holes the same diameter as those produced by the Rotobroach. Fuller, Stanley, and some discount countersink/counterbore sets may produce a slightly different caliber bung that may be disappointingly either too small or too large for the job.

Also, note that the tool’s pilot point tension is adjusted via a hex-head screw that is set (and somewhat hidden) in the end of the arbor. The spring can pack a bit of a punch, and as the instructions thoughtfully suggest, if you are cutting metal, “Do not aim cutter so that the ejected slug could hit you or someone in the vicinity of the operation.” A real crowd-pleaser around the shop.

With those things in mind, I can say that the Rotabroach cutter set is a worthy, time-saving addition for any repairer’s or restorer’s toolkit.

Greg Rössel is a contributing editor for WoodenBoat.