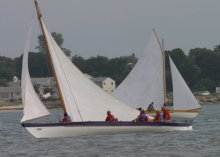 NEW BEDFORD, Mass. – The Azorean Maritime Heritage Society’s 7th International Whaleboat Regatta is slated for September 4-8, and will include a history-making contest never before attempted in American waters. For the first time, Azorean whaleboats will race American whaleboats in the regatta. The contest is expected to reveal the performance capabilities of the two designs as they evolved over 200 years on both sides of the Atlantic.

The Regatta attracts US and international tourists and wooden boat enthusiasts as well as civic leaders and dignitaries from the US, Azores and mainland Portugal. In 2010, the event helped to welcome many people to the waterfront district of New Bedford and in 2011 the Azores welcomed crews from the New Bedford area.

Two teams from the Azores will travel to the Whaling City this year to compete against our local USA teams in both sailing and rowing competitions in Azorean whaleboats. Wrapped around the actual “on the water” events is a week full of land-based activities, social events, lectures, cultural performances and exhibitions. On Friday, September 6, there will be both men’s and women’s Rowing Races. On Saturday, September 7, there will be both men’s and women’s Sailing Races. Each competition is actually made up of three races, with the overall winner being the team that has the most wins.

Adding a new level of excitement in 2013 is the inclusion of three American Beetle wooden whaleboats presently under construction. These three boats are being built to swing off the davits of the Charles W Morgan during its epic sail into New Bedford in July 2014. These Yankee Whaleboats are being built by several organizations, including the New Bedford Whaling Museum and also Mystic Seaport.
On Sunday, September 8, the three American Beetle Whaleboats will compete against the three Azorean Whaleboats in rowing and sailing events. This is sure to lure the interest of wooden boat and sailing enthusiasts throughout New England and beyond. Not since the end of the whaling era has anything like this been seen.

All races will be held in Clark’s Cove, located in south end of New Bedford on the west side of the peninsular. Best viewing areas are near the boat-ramp on West Rodney French Boulevard.

For schedule updates and additional information, visit www.azoreanmaritime.org. For information on the free public lectures being offered as part of Regatta Week, visit www.whalingmuseum.org.

Azorean Maritime Heritage Society
Founded in November of 1997 and based in the historic maritime city of New Bedford, the mission of the Azorean Maritime Heritage Society (AMHS) is “to promote Azorean culture and Azorean whaling heritage by raising awareness and pride within the Azorean-American community of New England and recognizing the rich maritime heritage commonly shared for more than 150 years between New Bedford and the Azores.” The first challenge of the AMHS was the construction and completion of two wooden whaleboats, Faial and Pico… a daunting task for a young organization. Faial and Pico are stored in Casa dos Botes, located adjacent to the New Bedford Whaling Museum, in New Bedford Whaling National Historical Park.

The tenacity of Dr. Mary T. Vermette, first AMHS President, coupled with the unwavering support of the New Bedford Whaling Museum made the dream of these vessels a reality. Today, the two boats are joined by a third, Bella Vista, as emissaries of the AMHS mission. Proudly, our whaleboats are part of New Bedford Whaling National Historical Park.

Through participation in rowing and sailing competitions, parades, expositions and through regular use during the summer season by our members and the community these boats promote conversation about our shared maritime heritage… that of the Azores and the United States.

Wednesday, September 4, 6:30 p.m.
New Bedford Whaling Museum
Free Public Film Premier: Portuguese Consul Pedro Carneiro will host a reception welcoming our guests from the Azores. This will be followed at 6:30 by the world premier showing of the just completed documentary “Whales and Whalers” produced by the award winning Azorean film maker, Luis Filipe da Silva Bicudo. Mr. Bicudo will be present and will make some opening remarks.