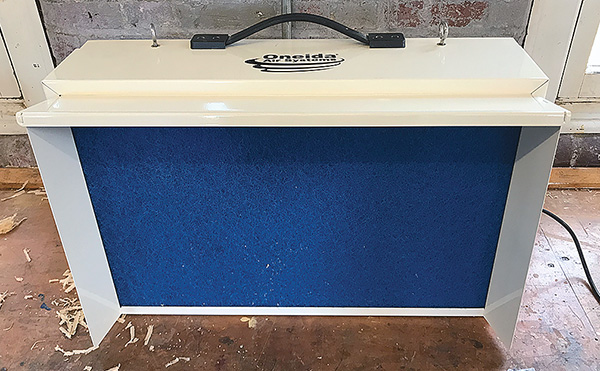 Dust collection has come a long way in the past few decades. It was once common to have mounds of dust piling up around milling tools—planers, jointers, and tablesaws. While this marked the progress of a day’s work, it also endangered the lungs, skin, and eyes of the people doing the work, and it adversely affected the performance of these tools. As the health hazards of breathing wood dust—some of it carcinogenic—became better understood, so did the science and engineering of centralized wood-dust collection. Powerful fans fed by a network of ducts are now typically plumbed to stationary tools in even the humblest of workshops, and the resulting improvement of working conditions has been profound.

Benchtops, however, don’t commonly have solidly engineered dust-collection solutions. And hand-sanding at the bench can produce a significant amount of fine dust over the course of a day. Oneida Air of Syracuse, New York, an industry leader in woodshop dust collection, has recently released a product, the BenchTop DC, aimed specifically at this problem.

The tool is, essentially, a steel box measuring 25″ wide × 16″ tall × 7″ deep. It weighs 20 lbs, and has a suitcase=style handle on top for easy carrying. Inside that box are six fans whose speed can be adjusted, and two filters. The fans move air up to 535 cu ft per minute (cfm). (Shop vacuums are generally below 200 cfm; anything over 350 is considered the high-volume airflow typical of dust collectors.)

The BenchTop DC arrives mostly assembled, with its two fiters—a coarse MERV-5 prefilter that can be washed and reused, and a primary MERV-15 filter that cannot—already installed. The primary filter is 16″ × 25″× 3″, and replacements can be sourced through Oneida, at online outlets, or at most hardware stores. This filter is rated to remove particles as small as 0.3 micron, which includes bacteria and cooking smoke (though the Benchtop DC is not designed to remove these) as well as fine wood particles. (MERV means “minimum efficiency reporting value,” and is a measure of the size of particle a filter will collect. MERV 15 is at the fine end of the scale.) 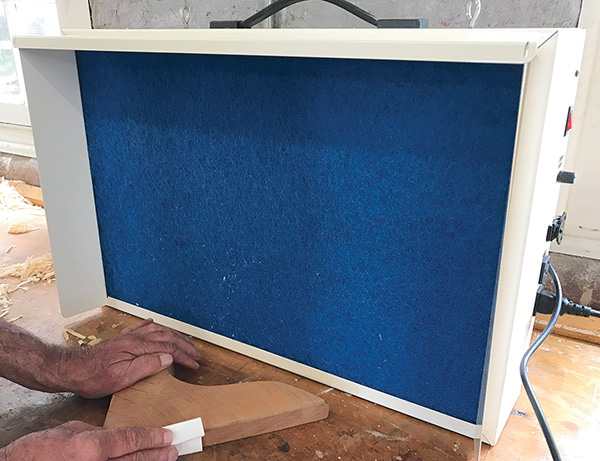 The blue surface is MERV-5 prefilter that’s washable and reusable. Fine dust is collected by a replaceable MERV-15 filter.

Setting up the newly arrived collector required the application of three self-adhesive cork strips to protect the surface upon which it sits, and the assembly of three vanes that surround the rectangular intake. Then one inserts the power cord, plugs it in, and hits the switch. The running tool is fairly quiet, but not silent. It sounds like a tiny jet engine.

The BenchTop DC is meant to be placed at the back of a bench and used within 20″ of the source of dust. As a preliminary test, I set it up on a benchtop, turned the fans to low, and released a stream of fine dust from my hand from above the unit and 12″ from the intake face. The stream of particles gently arced into the collector. I did the same from 16″ away, without altering the fan speed, and the dust fell vertically. With the fans turned up to half speed, once again the column of dust arced into the filter. I did the same at 24″ away: at half speed, the dust fell vertically, but at full speed it was drawn into the collector.

Oneida does not recommend using this unit as an ambient air cleaner—or using an ambient air cleaner at all. But they do provide holes for ¼″-20 eyebolts in the top of the housing, so the unit may be hung from a ceiling or other overhead surface. This gave me an idea: I tried it in my boat’s cabin when sanding deckbeams. Placing the collector was awkward; the sharp corners of the steel box were a potential hazard to joinery (although no harm was done); moving it as the job progressed was even more awkward; and unless it was positioned near the dust source, the dust just fell to the sole. Remember, this is not a prescribed use of the tool. I also tried positioning it close to a cockpit coaming I was sanding. Putting the unit within about 6" of this vertical surface created some interesting fluid dynamics: a backdraft actually drew dust away from the unit down low where I was sanding. I was reminded of the old book reviewer’s adage: review the book you read. If you read a book about hiking the Appalachian Trail, don’t complain that there are no boats in it. If you review a tool made for collecting dust at the benchtop, don’t complain that it doesn’t work as a shop vacuum or ambient-dust collector. 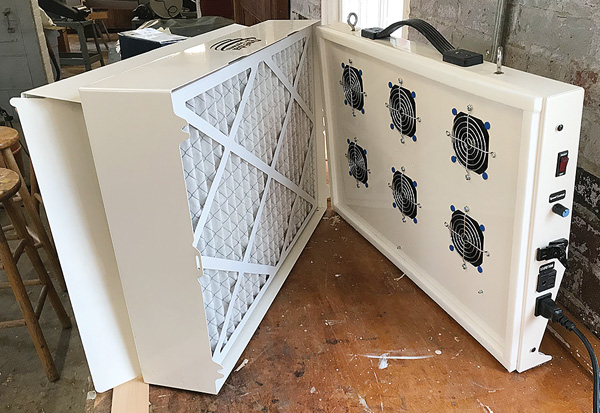 The BenchTop DC in fact excels at its intended use. If you are hand-sanding, machine-sanding, grinding, or using a rototool at the bench, this collector will effectively gather the nuisance dust. It is also very effective at gathering the prodigious quantities of dust produced in wood-turning. I set it up behind my 24″ lathe, plugged the lathe into the dust collector’s handy auxiliary outlet (which is not tool-triggered; it is always live when the collector is plugged in, regardless of the on/off switch’s position), and experimented with a gouge on a piece of cherry. While some chips fell away to the bench, a steady stream of fine dust flowed reassuringly from the workpiece to the collector. That’s the dust that really matters—the stuff that gets in one’s eyes, hair, clothing, and lungs, and settles into every nook and crevice of the shop. When I took a piece of sandpaper to the spinning workpiece, the collector was even more effective, gathering virtually all of the dust. I have a shop-vacuum-mounted hood that’s made for lathe work, and it doesn’t hold a candle to the BenchTop DC.

The dust collector’s quality is reflected in its price of $599, which may not be justifiable for occasional work. On the other hand, it’s cheap compared with health care. If you’re doing lots of dust-generating handwork at the bench, using a stationary sander regularly, or turning spokes for ship’s wheels, posts for fiddle rails, belaying pins, or any other elements for your boat, this collector will be a valued addition to your dust-collection arsenal.