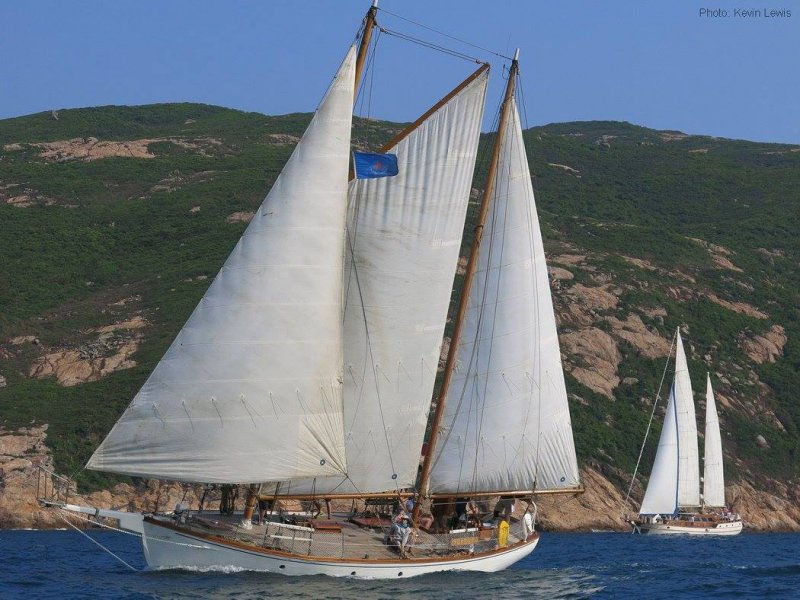 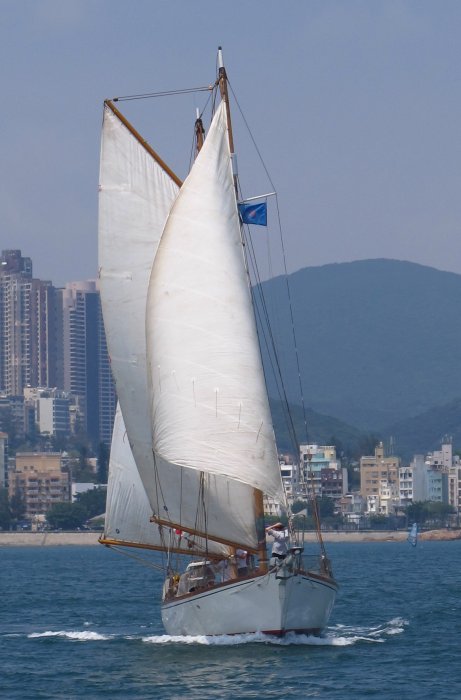 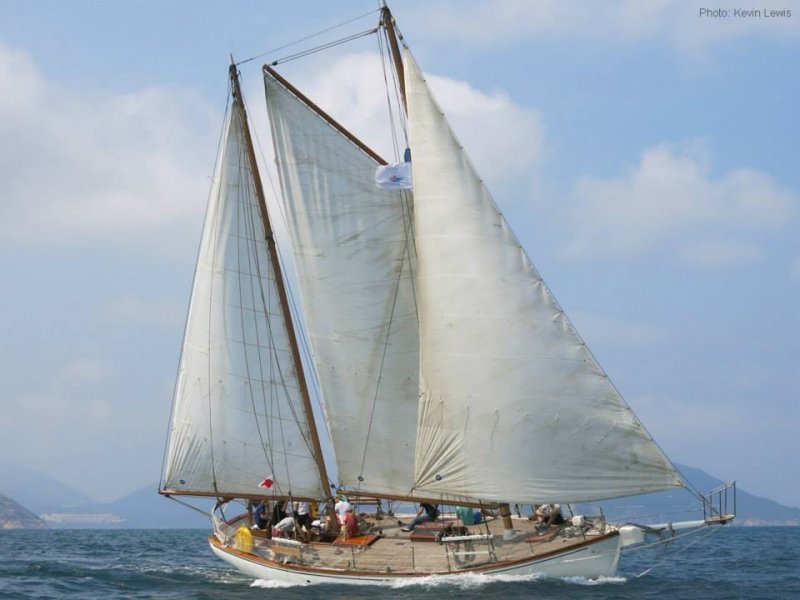 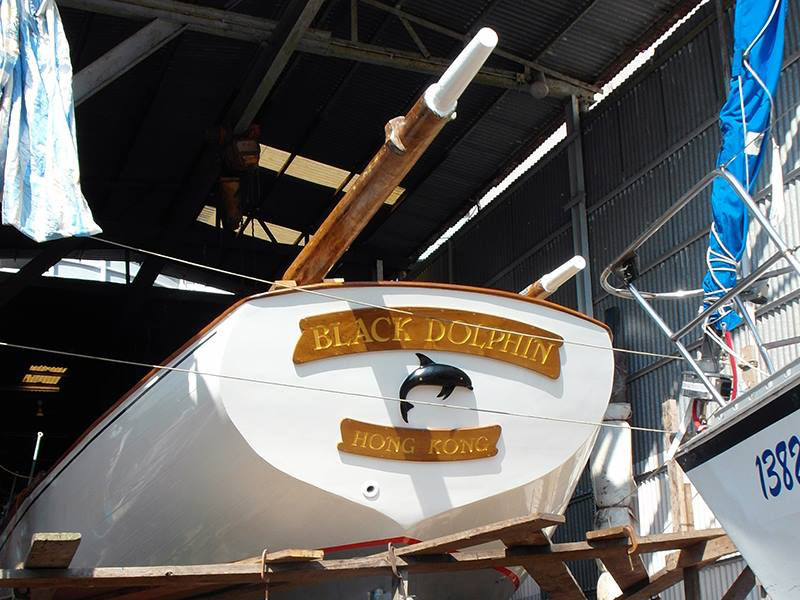 Black Dolphin is a 50-foot sparred length diesel auxiliary gaff-rigged sailing ketch designed by famed Southern California yachtsman and shipwright Hugh Angelman and built … well, we aren’t sure. That is the first little mystery about the boat.

We know without doubt that Black Dolphin was designed by Hugh Angelman. We know this because we know of a sistership named “Resolute” that is identical in almost all respects to Black Dolphin. We know for certain that Resolute was designed, build and, in 1936, launched at Hugh Angelman’s Wilmington Boat Works (WILBO) in Southern California.

The mystery is whether or not Black Dolphin was also built at WILBO. The boat is definitely the same Angelman design as Resolute, and was built using the same methods and materials, but U.S. Coast Guard documentation indicates that the boat was build and launched in 1944 in Inglewood, California, by a man named R.C. Ricketts.

We have been unable to find any information about a Mr. Ricketts, the Inglewood shipyard in which it may have been built, or who owned the boat between its launch in 1944 and 1950.

What we do know is that Black Dolphin is iron fastened, probably due to the lack of available bronze fastenings for private yachts during WWII. We also know that WILBO’s entire production was taken over during the war at which time Hugh Angelman designed and build ships for the U.S. Navy. Among WILBO’s Navy builds were a 96-foot Harbor Tug, an 85-foot rescue boat, eight 136-ton submarine chasers, and eight 780-ton minesweepers.

I point this out because one theory about the provenance of the Black Dolphin is that its construction was started at WILBO before WWII began, but that it was moved to a smaller shipyard in Inglewood in 1942 to make room for the war effort at WILBO. This theory was proposed by a marine surveyor who knows Black Dolphin very well and who has surveyed many of the boats built at WILBO. He said that the construction and materials used in the boat are “consistent” with the other boats built at WILBO he has surveyed and that he had heard the story of the boat being moved at some time in the past.

We also know that Hugh Angelman was on board Black Dolphin a few times. We know this because one of our sources of information concerning the boat’s history who sailed on board Black Dolphin as a teenager was on board for Hugh’s last visit to the boat in 1963. This man has been an invaluable eye witness source of information about Black Dolphin’s early days: “I believe ‘Black Dolphin’ was built by WILBO for a hardwood dealer who furnished all the wood (Honduras mahogany; double planked) for the hull, Teak deck, Spruce spars and Gum trim below. Her hull was black, rails all around were varnished, bowsprit and mast were painted beige. There was a black rowing skiff that was carried portside on deck just aft of the mainmast and there were a pair of swiveling davits for launching. The deck was solid teak. Unfinished except for one broad plank that ran down the centerline. There was a wood burning ‘Shipmate’ stove in the galley with a stainless stack through the deck. There was no refrigeration and there was ice loading hatch on the port side.”

So, we don’t know for sure whether Black Dolphin was built at WILBO, in Inglewood at an unknown shipyard, or was begun at WILBO and completed at Inglewood. It is also possible, but not really very likely, that the Coast Guard documentation is wrong and whoever he was, Mr. Ricketts didn’t build the boat.

After being launched, Black Dolphin disappears from the record between 1944 and 1950 when she was purchased by Bill and Marian Rumsey. After buying her, Bill and Marion lived aboard Black Dolphin, most of the time in the San Diego area, with two young sons Tom and Billy. We have photos of Black Dolphin in front of the Coronado Boat Club along with Resolute and a copy of an interview with the Rumseys published by the San Francisco Chronicle (29 September 1961) after they returned from a trip to Hawaii with their kids on board. We also are in communication with Bill and Tom, but they were very young (12 and 4) when their parent’s owned Black Dolphin and have few memories of the boat.

Bill was a lifeguard among other jobs, and even paddled a kayak to Catalina Island and back for fun. Marian was a teacher and wrote children’s books, some of which we’ve purchased and keep on board the boat. Among their many accomplishments, Bill and Marian were one of six couples who started the Seven Seas Cruising Association (SSCA), which has grown to be the oldest and largest (7,000+ members) worldwide organization supporting the liveaboard cruising lifestyle.

The Rumseys sold Black Dolphin in about 1962 to Oliver Peak, who moved her from San Diego to Oceanside before heading out for Venezuela. A young man named Charlie joined Oliver in Costa Rica to help bring the boat back to San Diego. Charlie remembers that in about 1967-68, Oliver sailed Black Dolphin to New Zealand where she was dismasted in a storm. “After the dismasting off New Zealand a friend of mine visited him in Auckland, NZ. She was repaired and deck freighted back to San Diego. I think my last long trip aboard was Cabo San Lucas to San Diego in the early 70's.”

Black Dolphin has developed strong feeling among people who’ve sailed on board her. We are still in touch with the Rumsey’s boys, Charlie Black, Larry Wave, and Brett Goldstone. All of them have fond memories of the boat and Brett even hopes to build a copy of her some day.

That would be incredibly expensive. Black Dolphin is 50 feet overall including her bowsprit and is white oak framed and mahogany planked with teak decks and gum interior trim. Identified as an “A-40 ketch” to differentiate the design from the prolific Angelman’s other designs.

It is unknown how many of the A-40 class were built, or how many still survive. It is thought that there were less than a dozen commissioned. Our research has only found one other example still afloat, the Resolute. It has been estimated that to build her today, if you could find the wood and expert ships carpenters, it would cost between USD$1.2-$1.5 million.

Today Black Dolphin has a new home and a new purpose – She’s sailing in Hong Kong as the “tall ship” of The Harbour School. Aboard the Black Dolphin, students will learn awareness and respect for Hong Kong’s seafaring history and marine environment and the importance of communication, cooperation, teamwork, and leadership to achieve one’s personal and group goals. Students will develop patience, persistence, self-reliance and even courage in sometimes physically challenging environments as well as problem-solving and decision-making skills in planning for and conducting activities on board.

In closing, one of the people who was able to fill in many of the gaps in Black Dolphin's story, Ginny Filiatrault, an amazing person who sailed aboard Black Dolphin with the Rumseys many times as a teenager and who arguably saved SSCA from oblivion when it was close to shutting down, passed away in January of 2015. If you have more information about Black Dolphin please contact me.