“There’s nothing—absolutely nothing—half so much worth doing as messing about in boats,” says the Kenneth Grahame character, Rat, in The Wind in the Willows. That’s so true, especially for young people, and even more so when they have built the boats themselves.

Anyone who has built a boat knows that it is the near-perfect vehicle for teaching applied math and science, because these topics apply to all phases of a construction project. A boat can also be a vehicle for understanding a process that’s difficult to replicate on a screen. There are formulas, fractions, ratios, proportions. There is geometry everywhere—isosceles triangles, symmetry, perpendiculars, right angles, and bisecting angles.

There is also chemistry—electrical potential of dissimilar metals, or the scary organic chemistry of epoxy. There are inclined planes, vectors in navigation, and the calculation of displacement. There’s physics in simple machines (pulleys), lift, drag, and fluid dynamics. Even the humble act of spiling a plank can be viewed as statistics, where the mean ends up as the edge of the strake. Best of all, schools are starting to get on board now that the dreaded term “shop” has been thrown over the rail and replaced by “practical lab in applied math and science” and “maker spaces.” Whatever works, I guess. However, all of these opportunities can be lost if the student isn’t engaged and excited about the project.

Enter this trio of shop manuals written by Joe Youcha—Afternoons in the Boatshop, Bevin’s Guide to Boat Building Math, and Framing Square Math—geared primarily for the young boatbuilder. Technical writing for beginners is difficult, and even Danielle Steele would find it challenging to turn a tome on geometric formulae into a bodice-ripper. Fortunately, Youcha is up to the task, as he has been teaching folks to build boats for many years and knows the best way to teach is to tell a good story to hook the student. The manuals are written in conversational style and are well-illustrated and engaging, in the same way a graphic novel would be.

The place to start is with a story. Afternoons in the Boatshop is told by Emma, a seventh-grader who has been given a choice: Either stay after school for extra help with her teacher to improve her math grade or help her family friend, Bill, build a boat. “Who needs all those fractions and geometry?” says Emma. “Boring, and besides, where would you use that stuff anyway?” Emma chooses boatbuilding, thinking that anything has got to be better than school. She finds through boatbuilding not only that all those formerly tedi­ous classroom lessons miraculously turn into fun and useful tools, but she also finds the pride and confidence of craftsmanship.

In Afternoons, Emma and the ever-patient Bill introduce readers, young and adult, to the mathematical and geometric tricks of the trade that carpenters have used for centuries; symmetry; what looks good; and the ever-elusive skills and values of planning and thinking ahead. 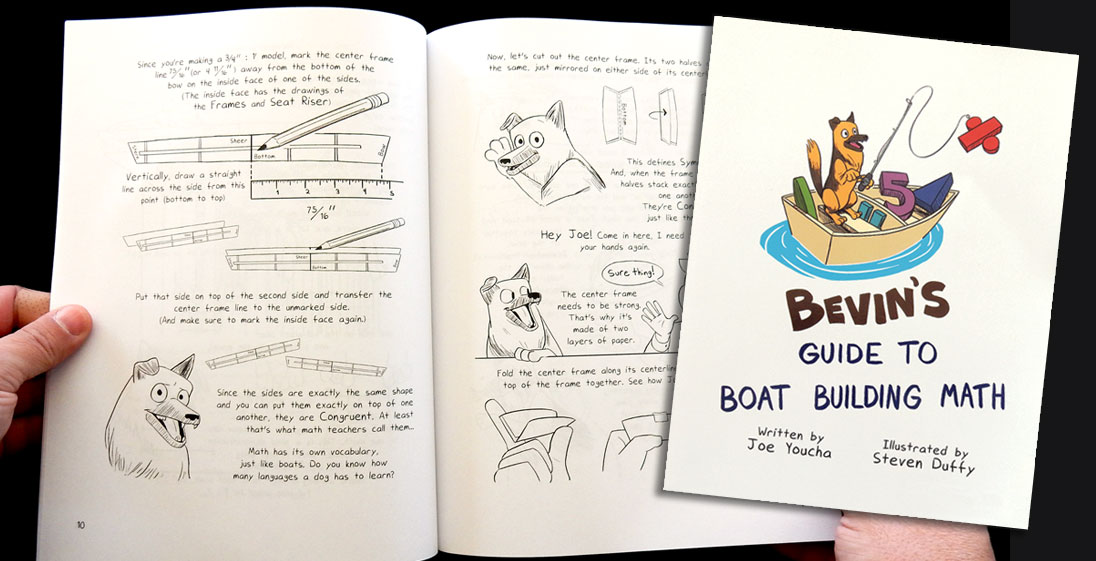 The companion book, Bevin’s Guide to Boat Building Math, is the reference compendium for the handy boat mechanic’s skills used in Afternoons. Bevin, Youcha’s math-wizard dog who acts as the author of the book, starts by introducing the reader to cardboard modelmaking. The model is a teaching tool sneaking-in practical mathematics—fractions, reading a ruler, use of a compass, and fun with geometry. With that under the student’s belt, Bevin introduces the art and tricks of doing math in his head. Says the dog, “I’ve never used a calculator in my life—no fingers to press the buttons,” and, “Make multiplication tables, factors, fractions, ratios, and proportions your friends.” He then proceeds to illustrate easy techniques using them. Good dog!

With the model built and those math tools in practice, the canny canine shows how to use the model (and penny ballast) to determine displacement and center of gravity. The icing on the cake is a straightforward glossary of math and boatbuilding terms. 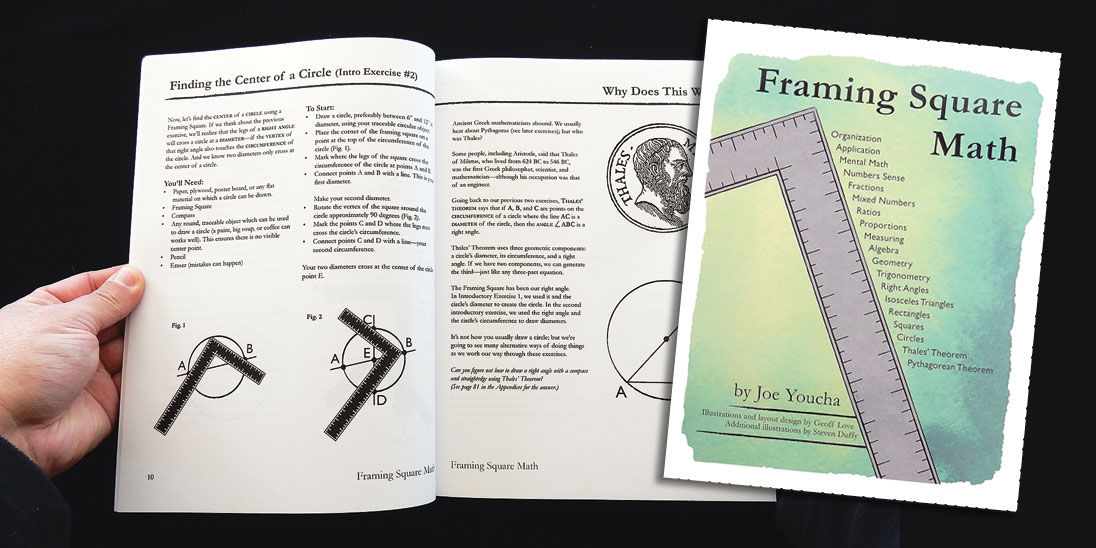 Framing Square Math is the instructors’ manual, or cookbook, for the hands-on “geometric math” used in the other two books. As Youcha notes, “This is visual math—math described though ratios and proportions and usually expressed through similar triangles.” He continues, “Sixty-five percent of students in America are visual learners. Why don’t we teach for them?”

This is fascinating stuff and a mathematical approach I really haven’t seen in years, or at least not since I was a carpenter’s apprentice. It’s easy to forget that the large framing square isn’t just about making right angles; indeed, it is a cordless calculator. So with your framing square you can calculate ratios and proportions, determine rise and run, multiply and divide, calculate the area of circles, do some framing-square trigonometry, and rediscover Descartes, Galileo, and Thales of Miletus, and lots more, including the ever-useful “finding the height of an object using similar triangles (and trigonometry).”

In Framing Square Math, Youcha uses the same “pull a rabbit out of a hat” conversational style that he employs in the books for young folks, and he turns that geometry you have been trying to avoid for years into a lot of fun.

The Afternoons in the Boatshop trilogy is just the ticket for young aspiring boatbuilders, their instructors, or anyone who wants to know why people love building boats. Maybe it is true that boatbuilding is a metaphor for just about everything.

Greg Rössel teaches at WoodenBoat School and is a contributing editor for WoodenBoat.