The Delivery from Hell—Part One: New Jersey 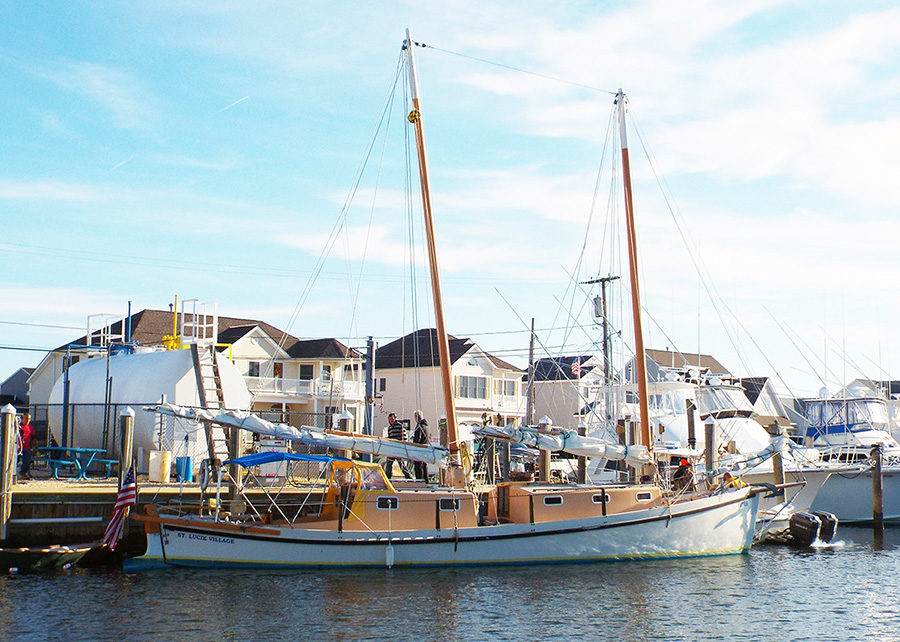 In December of 2013 I sold my sharpie schooner IBIS to a man from New Jersey, using owner financing. It was, perhaps, the biggest mistake of my life (not knowing what further stupidities await me).

I designed and built IBIS, a highly modified adaptation of the Straits of Juan de Fuca halibut fishing sharpies of the 1880s, as the prototype for my Maxi-Trailerable Design Series. The idea behind the series was that you could store your cruising boat on a standard 40-foot 3-axle trailer at home or in an inland storage lot, and launch her when going on a cruise. Thus you could beat marina and boatyard storage fees, saving several thousand dollars a year.

You can read more about IBIS in my previous blogs, as she became my sixth personal cruising sailboat. This happened by default, as I simply could not sell her. IBIS cost $205,000 to build; labor, materials and yard costs. I started advertising her for something like $175,000, and over three years came down and down, until I lowered my asking price to $89,500 in total desperation. Only one offer came in, and that was for the full price on the condition that I would sell using owner financing.

The buyer spent a week crawling all over IBIS, while I explained everything and gave full disclosure of her qualities and idiosyncrasies. We had her surveyed, and she passed with flying colors. We signed a contract hammered out by a professional brokerage firm, and I took a down payment. The new owner sailed IBIS to the Florida Keys, and then had her trucked to his home port in New Jersey. We stayed in touch, and I typed out instructions for tabernacling the masts and preparing her for the trip. The buyer, I shall call him Mr. S, had some engine problems which he complained about, but then solved. I have never had problems with that engine (an Isuzu 3LD2), and I just finished motoring 1,200 nautical miles.

When the time came for the first payment, it didn’t come. I contacted Mr. S, and he accused me of misrepresenting the boat to him, and informed me that he was not going to honor his contract. I subsequently hired a maritime lawyer, and we went around and around for months. Finally, at Mr. S’s request, we created a new contract (these are called “First Preferred Ship’s Mortgages”), essentially reducing the total agreed-on price by a few thousand dollars, and delaying the payments for a year, with Mr. S making one partial payment, months late.

Many more months went by, and when the next payment came due, it didn’t come. I went around with the lawyers again, and was told of my options, all of which were rotten. I could sue in civil court; I could sue in federal court; or I could attempt a “self-help” re-possession. Any course I chose would cost thousands of dollars, and might not even result in success.

IBIS had two potential buyers, working through a brokerage company in Maine employed by Mr. S. Both parties went to see IBIS where she was hauled out at Holiday Harbor Marina, in Waretown, New Jersey, and upon seeing her degraded condition, withdrew their offers. IBIS had been hauled out some time in late 2014, and completely abandoned. No maintenance, no repairs, no winterizing. She was blocked “bow high” which caused water to accumulate in several of her cockpit lockers due in the inability of the gutters to drain properly, and this caused rot in one of the gutters. During that winter, pipes froze and broke, and the hot water heater froze, rupturing its tank. There was damage to the forward coachroof, several rust-bleeds and small blisters in the bulwarks, and various cosmetic flaws in her paint and varnish. Her ash tiller had rotted where the bolt passed through, and her forward companion doors had rot pockets.

My contract specified that I had the right to inspect IBIS and make any repairs I deemed necessary. Hence, last summer, I visited IBIS on “the hottest day of the year” (which was a real nightmare), and pumped out her lockers, cleaned and dried their contents, and taped the seats closed to keep further water out. Of course someone tore open the tape seams, and all the lockers filled with water again. I pinned the centerboard in the raised position, taking the strain off the pennant, which had damaged the coachroof.

Finally, in extreme desperation, I offered (through a third party) Mr. S a modest payment if he would sign IBIS’s ownership back to me. My lawyer sent me a USCG Bill of Sale for a Documented Vessel and a Cancellation of Lien. Thus, late last summer, I had a close friend meet with Mr. S, accept the signed and notarized Bill of Sale, and give him the notarized Lien paper and a $2,500 cash payment. What actually transpired was vastly more complicated than what I have written here; but you get the drift.

In early November I drove to New Jersey with tools and equipment to make IBIS seaworthy (really Intracoastal Waterway worthy), for the trip to Florida. Other than the water damage and broken plumbing, which I replaced, there were three structural problems to be addressed:

IBIS’s masts were up, her booms and gaffs in place (rigged incorrectly) and her sails, covers, and dodger were stored in the foc’s’le, with the battens on deck. The weather for that frantic week was excellent, which was a big help. I did a lot of running around, buying parts, stores, charts, and getting ready for the trip south. I unpacked all the contents of my Sprinter van into IBIS, including extensive tools, clothing, food, firearms, my guitar and Parker Marine’s office—computers, scanners, printers, boxes of books, catalogues, plans, etc. I had to arrange for friends to retrieve my van and drive it back to Maine, as I could not afford to bring both truck and schooner to Florida. The logistics and expense of this were prohibitive. 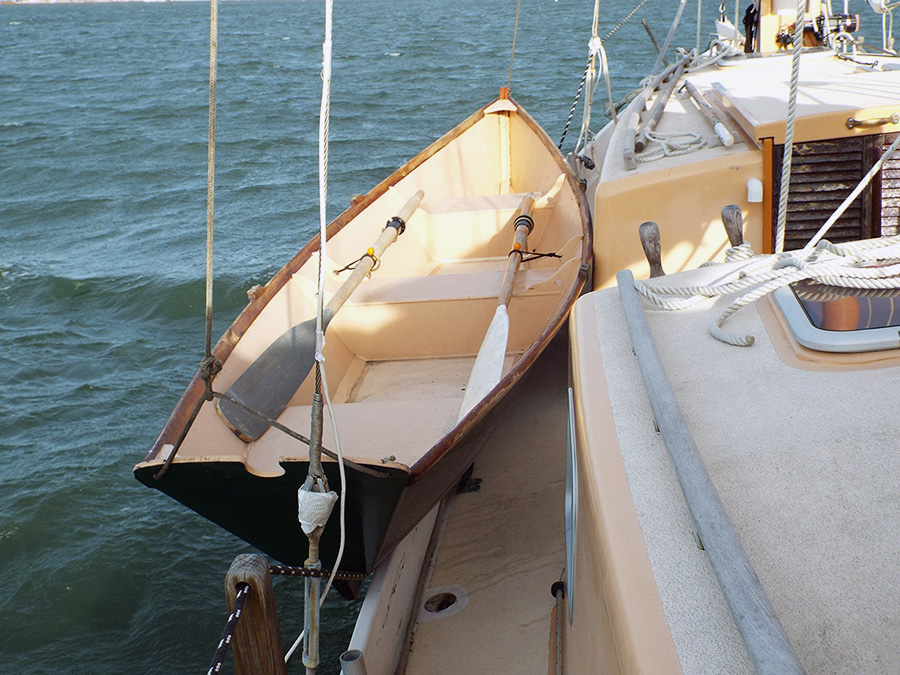 The dory upright on deck, lifted with fore & main halyards (the davits were gone).

The folks at Holiday Harbor Marina were very kind and patient with me; in particular Butch Gonsalves, the yard manager, went out of his way to help me in every way he could. In less than a week I had IBIS ready for launching, and we splashed her on November 8th. In the water, I re-rigged her, bent on her sails, reinstalled her full-length battens, and set up her dodger. All of these were in excellent condition. The Isuzu diesel fired right up and ran fine, but I had to dismantle the raw water pump and remove a piece of old impeller that had completely blocked the water flow. I replaced the alternator belt with a new one, checked all fluids, and on November 14th moved over to the fuel dock for diesel and potable water. 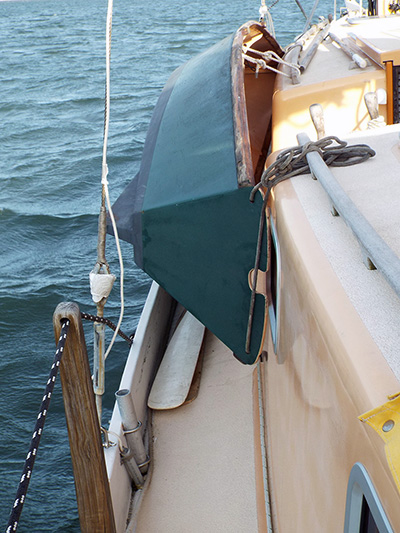 The dory stowed for sea.

I had brought my 14-foot dory with me (on the Sprinter’s roof), as Mr. S had disposed of IBIS’s 14-foot custom aluminum tender and her outboard motor. I towed the dory for the first part of my trip; then brought her on deck for the open-water portions—Delaware Bay and Chesapeake Bay. Mr. S had also removed IBIS’s aluminum side davits and disposed of them, so I used the fore- and main-halyards to lift the dory on board. Once on deck, I rotated the dory inboard and lashed her to the heavy-duty teak handrails bolted to the coachroofs.

I lowered the centerboard about two-feet, for steerage, and on Sunday morning, November 15th, departed Holiday Harbor Marina to begin what became The Delivery from Hell!