Around thirty-five years ago, I was at sea on a sailboat with conventional stainless steel stanchions and plastic-coated stainless steel wire-rope lifelines. This was off the California coast, and one of those big northwest rollers heeled the vessel suddenly and sharply, throwing me bodily against a stanchion. The top of it caught me in the ribs, cracking two of them and causing a huge purple bruise the size of a grapefruit. Needless to say, I was disabled for several weeks.

This caused me to think very thoughtfully about stanchions and lifelines. I already disliked metal stanchions, which never seemed to be very firmly attached to anything. You can almost always wiggle them inboard and outboard, they frequently cause leaks, and in the case of wood covering boards and toe rails: rot. Wire rope lifelines have no “give”, are prone to anaerobic corrosion (under the plastic), can break out in dangerous “fish-hooks” (stray wires), and can fail catastrophically when least convenient (typically in a gale at sea). I really hate them.

The first two cold-molded boats I designed and built were the prototypes for the Exuma 52 (SARAH—1984), and the Exuma 44 (TERESA—1985). SARAH was completed by her owner, who had my boatbuilding partner Bill Smith fabricate unusually strong stainless steel stanchions (through-bolted to both deck and bulwark) with wire-rope lifelines. TERESA had sturdy teak handrails along her cabin tops, and never had lifelines or stanchions until years later. I sailed her extensively for three years without lifelines, including several trips across the Gulf Stream to the Bahamas.

When I designed and built my pilot schooner LEOPARD (1994), I again had to confront the lifeline issue, as I intended to make long ocean passages in all weather conditions. I was inspired by drawings of historic 18th-century American Navy ships in Howard Chapelle’s books, several of which had wooden stanchions and rope lifelines. I decided to design modern duplicates of these, using Dacron braid for lifelines instead of wire rope (or hemp).

I chose “Miami teak” (pressure-treated southern yellow pine) for my stanchion material, starting with nominal 4x4 stock. At the lumber yard, I searched through the stacks looking for older, dryer material that had cured without checking badly or twisting, with small fixed knots or none at all. 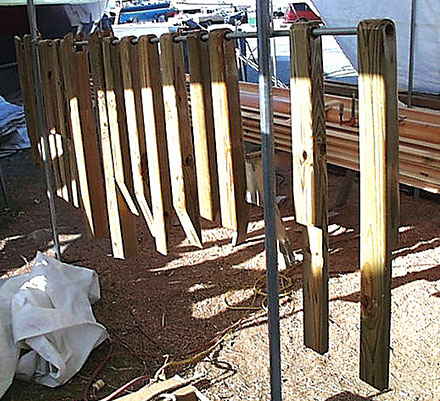 I tapered my stanchions in width from 3½′ to 3″ at the heads; and tapered them in thickness from 2 ½″ to 2″ at the heads. I then rounded the heads to a 1″ radius, drilled them to 3/4″, for 5/8″ braided or plaited Dacron rope, and routed all edges (including the holes) to a 3/8″ or 1/2″ quarter-round. The large, rounded heads would be very unlikely to injure someone thrown against them. The dry wood readily soaked up several coats of Deks Olje #1 penetrating oil, which I later over-coated with Deks Olje #2 finishing oil. This two-step treatment looks like varnish when finished, but is softer and more durable, and much easier to refinish than varnish. Once a year you lightly wet-sand or rub the stanchions with the #1 oil, then coat with the #2 oil. Deks Olje is made by the Flood company; it is marketed as a two-part marine Danish oil product. It can take a real beating—sun, water, dings, chafe, etc—and can be touched up without sanding. For those who care: Deks Olje is pronounced “decks olya” and not “decks olay”.

At their bases, I attach my wooden stanchions to the vessel’s bulwarks with four stainless steel carriage bolts (typically ¼″). I also build my bulwarks (or toe rails) from pressure-treated wood, air-dried and stack-laminated with epoxy and lag bolts. They are very strong, and my stanchions are therefore very stiff. Sometimes I notch the stanchions to fit inside the bulwarks; sometimes I bevel them at the bases; and sometimes I notch them to fit outside the bulwarks (see photo above).

Stanchions fitted outside the hull for T’IEN HOU’s aft deck.

For my sharpie schooner IBIS I used the same procedure, notching the stanchion bases to fit inside the bulwarks. In those cases where shrouds are in line with lifelines, I incorporate the turnbuckles for fairleading the lifelines. 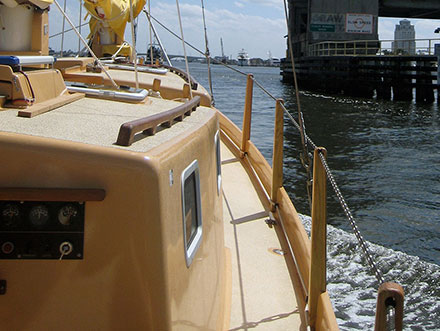 Stanchions for IBIS, showing incorporation of the fore shroud turnbuckle as a fairlead.

Where the stanchions approach the deck, I frequently round the bases off to prevent trapping water and dirt. I make one or two spare stanchions and carry them in stores because I broke one during a Fall gale in Maine once, when a USCG cutter came along side.

I terminate the Dacron lifelines at the end of the bowsprit (or bow pulpit) forward, and use large eye straps for the aft ends unless there are stern davits to attach to. A Handy Billy (block & tackle) is used to set them up tight. 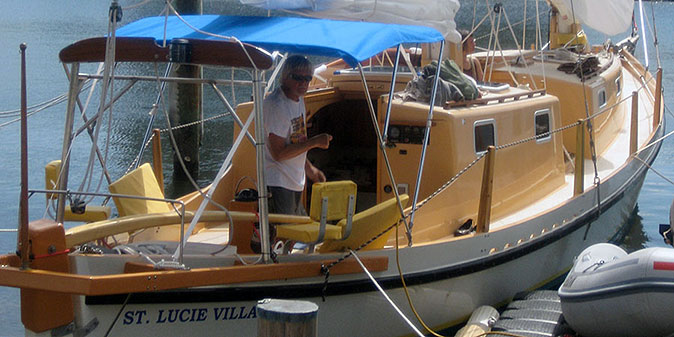 IBIS dockside in Coconut Grove, Florida, showing the aft terminal of her starboard lifeline prior to trimming the end.

I use 5/8″ diameter Dacron braid for the lifelines, stretched very tight, but not so tight that you could be injured when falling against it. In any case, 5/8″ Dacron rope is much softer and more forgiving than 3/16″ wire rope.

I usually make my stanchions about 36″ minimum above deck, and rarely add a second lifeline at the half-height level unless the vessel is to be used with children or pets, requiring netting and extra security. I rarely incorporate a “gate” in my lifelines. On large vessels with side davits, the lifelines are often eliminated between the davits; boat-booms, awning poles, or spars of any kind are lashed horizontally in their place.