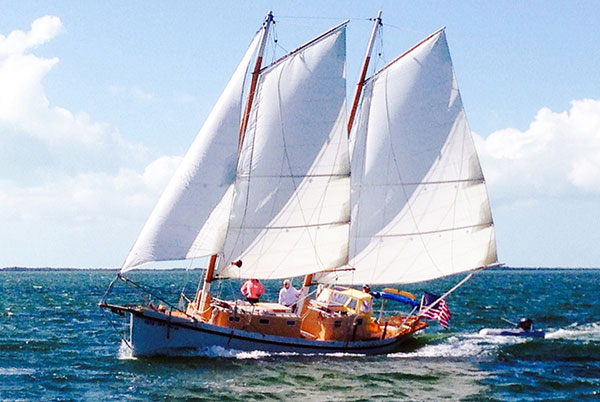 IBIS sailing in the Florida Keys with her new owner.

About a decade ago, a disturbing real estate trend gained increasing prevalence on the east coast of the United States: Boatyards and marinas began to disappear, being replaced by condominiums with slips. To have a boat slip, you had to purchase a condominium. Of course, most boat owners don’t want, don’t need, and cannot afford a condominium (I find it hard to imagine why anyone would). New zoning laws—particularly in Florida—were and are designed to eliminate boatyards in particular. After all, they are noisy, dirty, polluting and ugly to non-boat-owners. This trend became so pervasive that Florida actually passed a law mandating that new condo developments make a set number of slips availably to non-condo owners. At the same time, anchorages and mooring fields have become more restricted (and crowded), to the degree of banning anchoring outright in many areas. This has resulted in numerous bitter lawsuits, which continue to this day.

Being aware of all this, I began development of a new design series I called “Maxi-Trailerable Boats.” My concept was to design sail and power cruisers that can be stored and transported on standard 40-foot three-axle trailers. I limited these craft to about 45-feet or less in length, 10-feet or less beam, shallow draft, and 15,000 lbs or less displacement. I gave the sailboats tabernacled masts. With fewer and fewer boatyards and marinas, the idea was that you could store your cruiser at home (or in a storage yard inland), maintain her yourself, and put her in the water only when you wanted to go for a cruise. You could even stop using antifouling paint. This would save a fortune in costs related to owning a cruising vessel.

To promote the concept, I decided to build a prototype. I chose the Washington State halibut fishing sharpies from the 1880s as my model, because I love the design, and because it was the best-selling model of all my larger sharpie plans. I expanded the little schooner from 36-feet to 45-feet, limiting her other dimensions as described above. I gave her traditional twin houses (a day cabin and a night cabin), a new type of centerboard I was developing, and a “modernized” version of her original gaff rig. 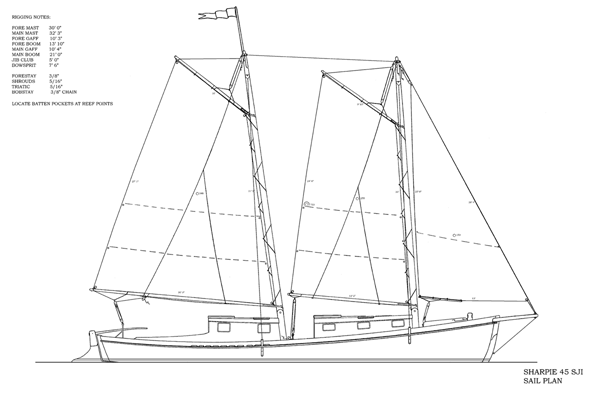 Specifications for the Sharpie 45SJI:

I did not choose this design because I wanted it for myself—I chose it strictly to promote the “Maxi-Trailerable” concept. It went over like a lead balloon. I have never sold a single set of plans for any of my Maxi-Trailerable designs, either sail or power.

I built IBIS in my outdoor shop in Riverside Marina, in Ft. Pierce, Florida, in 2007, ‘08 and ‘09. Despite her relative simplicity (she is a true flat-bottomed sharpie), she was still a sophisticated live-aboard cruising sailboat, and she took me parts of three winter seasons to build, with almost no help, and cost just under $70,000 in material and yard costs. Labor to build her (nearly all mine) was about twice that. 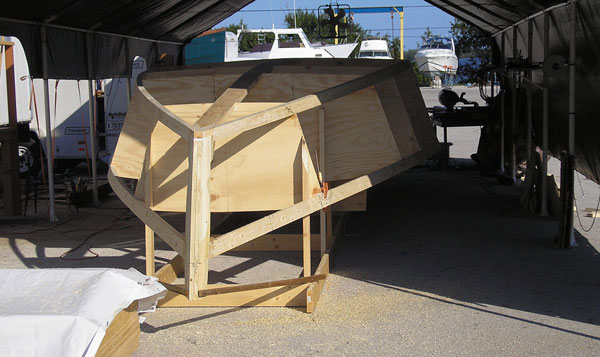 I had never built or owned a large double-ender, and I was curious to experience one, having always heard that they are more seaworthy in following seas. IBIS turned out to be much more seaworthy than I had hoped, although she does pound pretty hard when driven into large head seas (see Blog #11—A Sharpie in the Bahamas). Off the wind, in seas of 6- to 8-feet, she handles beautifully and rides the waves like a duck.

IBIS just out of the tent (on the left), with the gantry used to turn her over.

I launched IBIS in early 2010, and sailed her to the Bahamas with Delfine (Reuel’s Angel #1) as first mate, and Amy (an Outer Banks woman) as crew. We had some “new boat bugs” to cope with, most notably the catastrophic failure of the diesel’s heat exchanger. I had to have a new one sent from Connecticut, and I was very grateful to Exuma Markets in George Town, Great Exuma, for getting it through customs. (These people are the best!) Amy had to leave us in George Town, and Delfine and I sailed IBIS home, via Andros, the Berry Islands, Northwest Providence Passage, and West End, Grand Bahama. The Northwest Passage is open ocean, with strong currents and winds, generating large, often rough seas, and it was during this long-day passage that I confirmed IBIS’s sea keeping abilities off the wind. 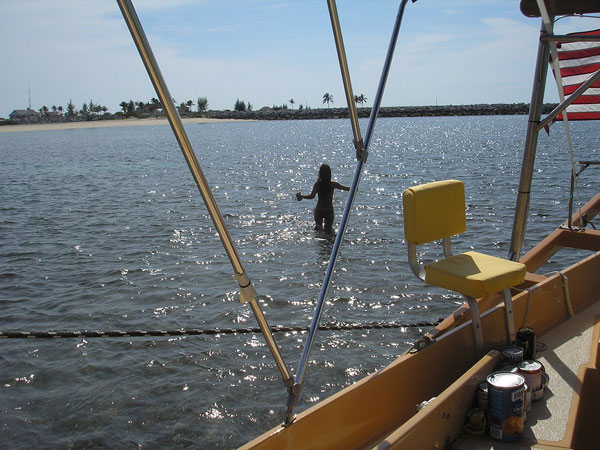 One potential disadvantage of the double-ended hull was helm-seating: IBIS is tiller steered, with a traditional outboard rudder, and I had to make upholstered seats (photo above) for steering her when heeled over under sail. At sea, I rigged lifelines behind these, and they worked very well, never once getting splashed with spray (while steering, you sit on the “high” windward side). 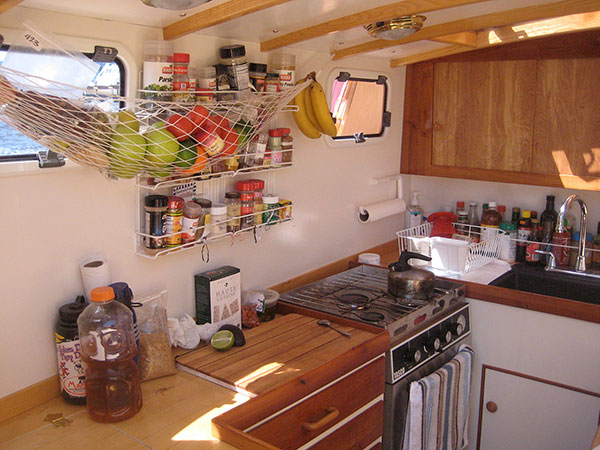 IBIS’s galley in her aft cabin, with a net for fresh produce.

Back in the USA, I modified IBIS’s rudder, which had too much counter-balance, made a dodger for her cockpit, and perfected other minor details (like a new mahogany spice rack). In 2011 I sailed her single-handed to the Abacos (Northern Bahamas), to meet my friends and neighbors from Maine (the Adams family) for a very brief cruise. We had fun, but there was not enough time to do what we wanted to do, or go where we wanted to go. After they flew home, I spent a week bumming around Marsh Harbor and Elbow Cay, visiting friends before sailing back to the states alone. It was a bittersweet cruise… and it made me realize that much of the pleasure of sailing in the islands derives from who you are with. “Alone” doesn’t really cut it. 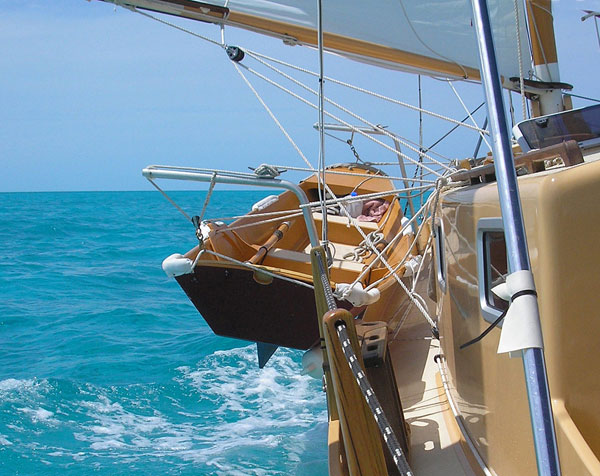 IBIS sailing on the west coast of Andros, showing her 14-foot periagua in the side davits (very rarely seen today).

In early 2012 I found a new first mate through findacrew.net—an excellent Australian internet service for connecting sailors and captains all over the world. Canadian Joee Sym (see Blogs #28 and #29) was an excellent sailor, great shipmate, and became a dear friend for life. We were joined by close sailing friends Tony Bianco and Carolynn Giordano, who flew in to meet us in George Town, and flew out from Nassau. We had a really great cruise, enriched with many fine memories, captured in hundreds of photographs./p> 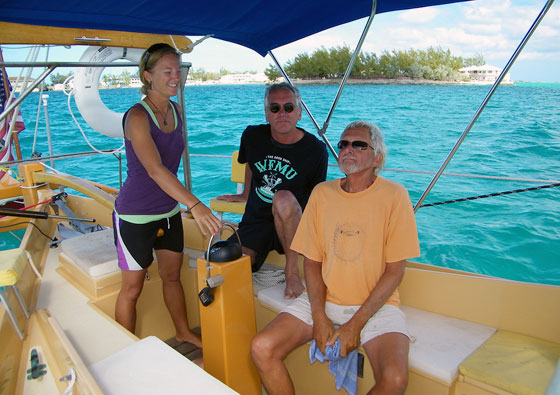 All three trips to the Bahamas confirmed my theory that true flat-bottomed sharpies make excellent island cruisers. I wish I had found time to sail IBIS to the shallow sounds and bays of northern Florida, Georgia and the Carolinas—but in late 2013 I found a buyer, and had to let her go. I used owner financing—which I cannot recommend—and sold her to an aging surfer from New Jersey, who took her north in early 2014. I know she will be a great cruiser on Barnegat Bay, a place I love to visit. 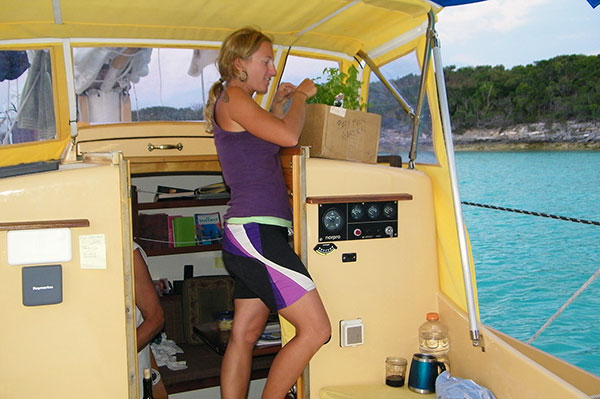