Text and photographs by Nic Compton 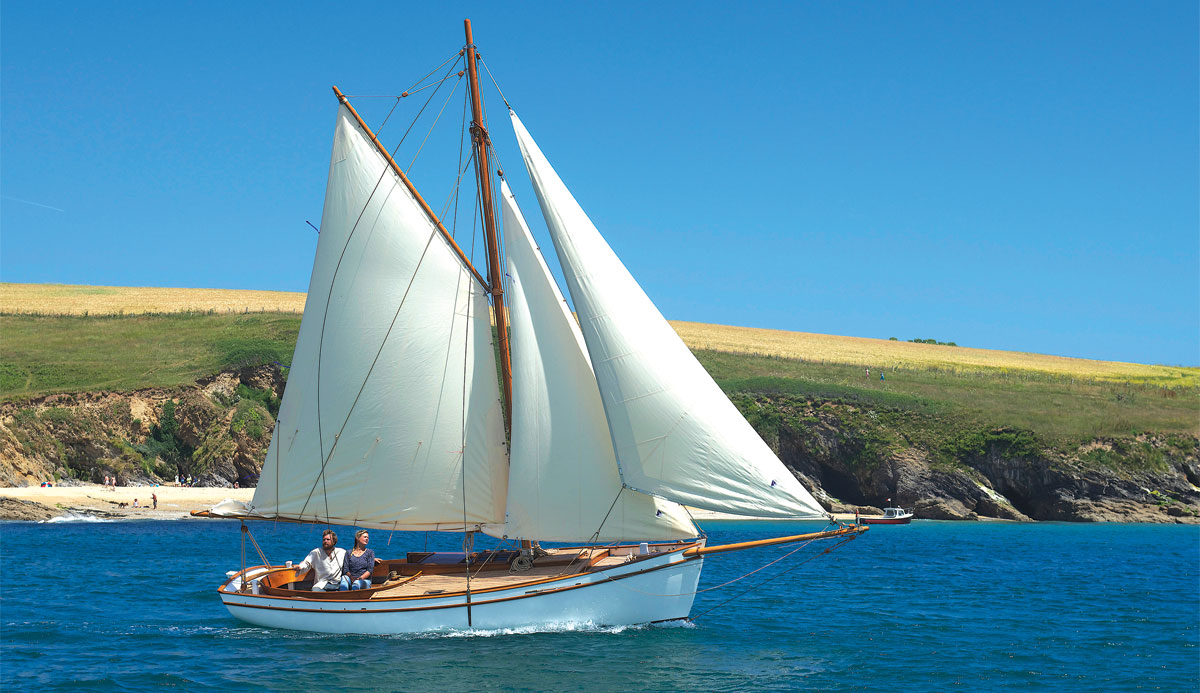 The 24′ Ed Burnett–designed cutter PANACEA doing exactly what her designer intended: going “for a sail around the bay” off St. Mawes, Cornwall, England.

Ever since Lin and Larry Pardey sailed around the world in their 24′ Lyle Hess–designed cutter SERAFFYN, 24-footers have come to be seen by many as the perfect size for pocket cruisers. They are economical to maintain, yet big enough to feel like “real” boats. The 24′ PANACEA is no exception, though her design brief was very different from SERAFFYN’s.

Ed Burnett drew the plans for FROLIC, the original boat of the design, for his father after years of discussion about what makes the “perfect boat.” The result was a cheerful, happy-go-lucky little cutter that makes no claim to being a globe-girdler. It doesn’t have standing headroom, an enclosed head, or even much of a galley. It’s got a large, beautiful, elliptical cockpit, but the fact that it is not self-draining makes the boat unsuitable for offshore sailing (though other configurations are possible).

In fact, the design aspires to very little except complete happiness. As Burnett wrote: “You can go for a sail around the bay, perhaps do a little fishing, or just chug up the river on a quiet evening to spend the night. After all, the things you are likely to remember more are the other boats you saw sailing around, the fish you caught (or didn’t), and the various noises coming from the mud, the birds, and the river banks as the tide went out in your favorite anchorage. The boat sets the scene—the fun you make yourself.”

Ben Harris built PANACEA to the Frolic design at his yard just outside Falmouth, Cornwall, England (www.benharrisboats.co.uk). She was launched just before the Falmouth Classics in July 2018 and, after a few sails on the Carrick Roads, was loaded onto a trailer and shipped off to Perth, Australia. Her owner, Richard Allen, plans to use her to help people with mental illness, thereby passing on a bit of that fun Burnett knew the boat could provide. 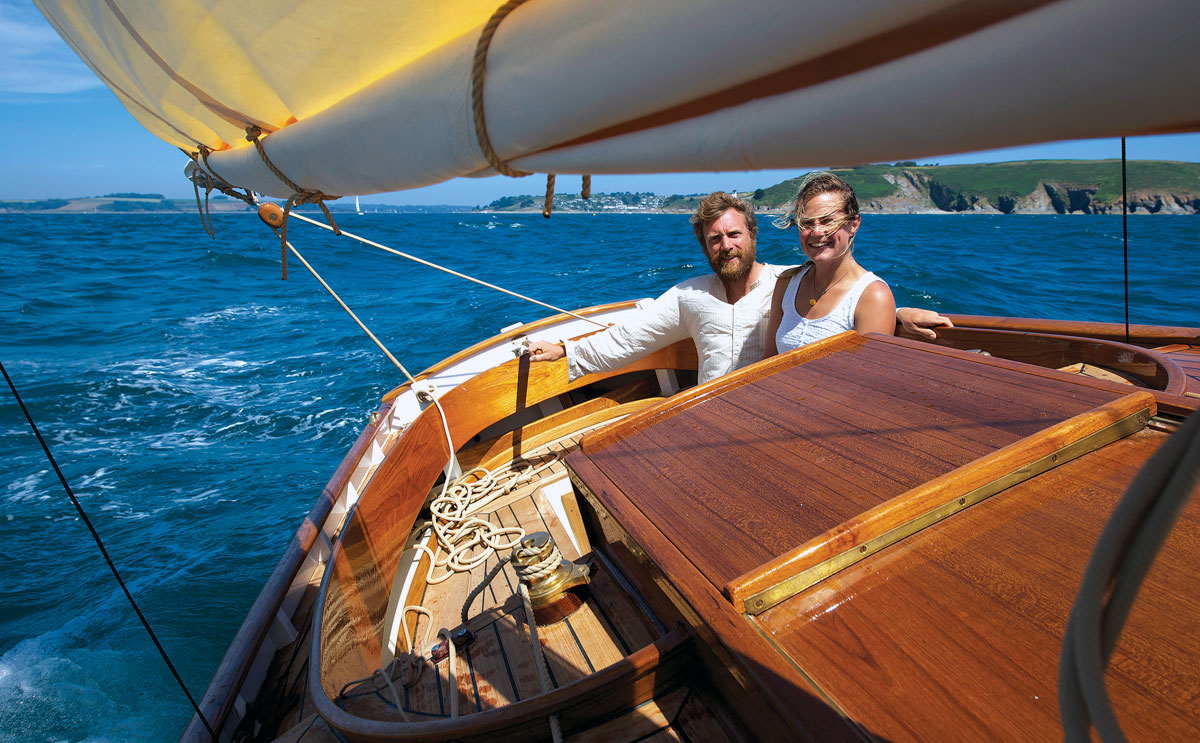 Builder Ben Harris and his girlfriend, Iona Wallis, sailed PANACEA off Falmouth before shipping the boat to Australia. Although it looks calm in the photo, winds of Force 4 to 5 [about 11 to 20 knots] were blowing around the corner. I was aboard as we headed into the 4′ to 5′ waves, and PANACEA stayed perfectly balanced and barely needed a hand on the tiller—a testament to her designer’s skill. The elliptical cockpit is one of the defining features of the boat, giving real comfort with a great sense of ease and security. 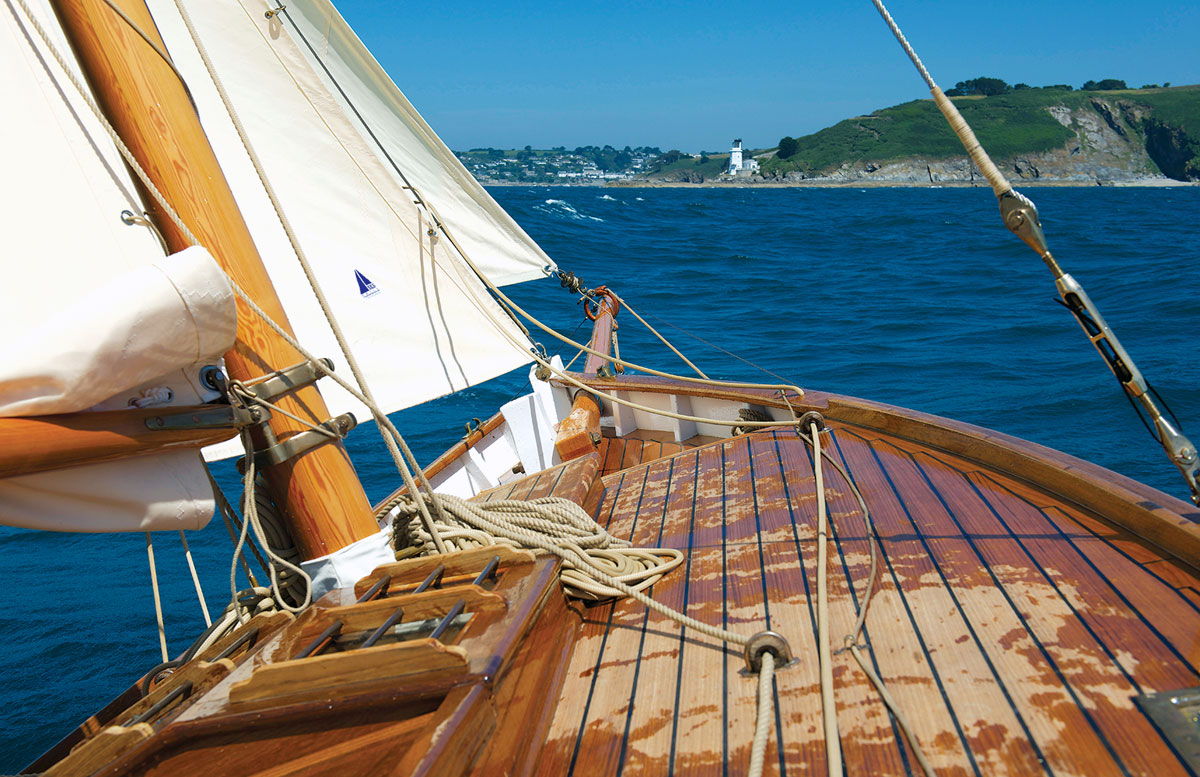 The design specifies several options for the deck layout, which Ben then adapted to the owner’s requirements. The raised deck was slightly extended, for example, and the hatch moved amidships to increase headroom below. The bulwarks forward provide some protection from waves when handling the hanked-on staysail, while the jib is fitted with a Wykeham-Martin roller-furling system. Ben describes the boat as “beautifully balanced, swift, nimble, and light on the helm, a playful ballerina!” 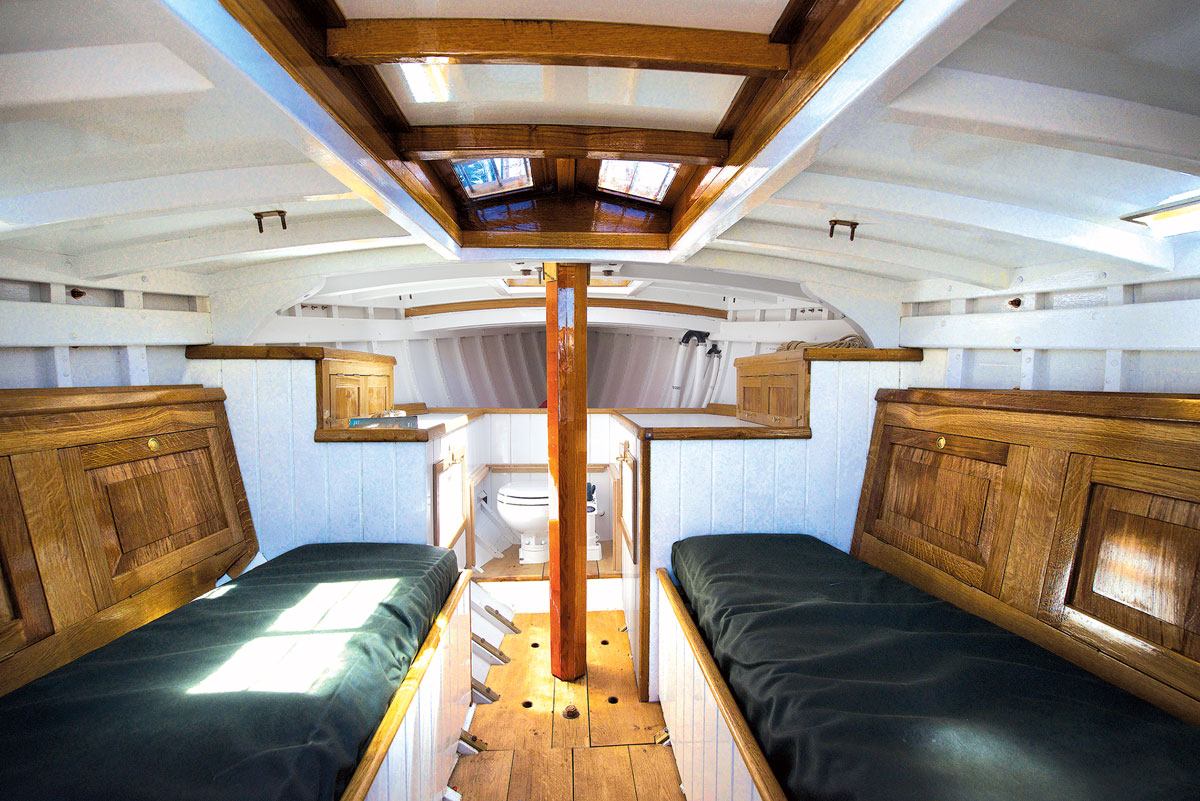 From the options for the accommodation, PANACEA’s owner chose a simple two-berth layout with storage forward. Burnett drew an alternative arrangement that shows a galley to starboard with standing headroom on the port side.

One of the biggest challenges was building the combined companionway and skylight. “It’s a compact structure which mustn’t impinge on the headroom or spoil the look of the boat by being too clunky or chunky,” says Ben. “It’s a light boat and everything has to look light in proportion with the structure.” 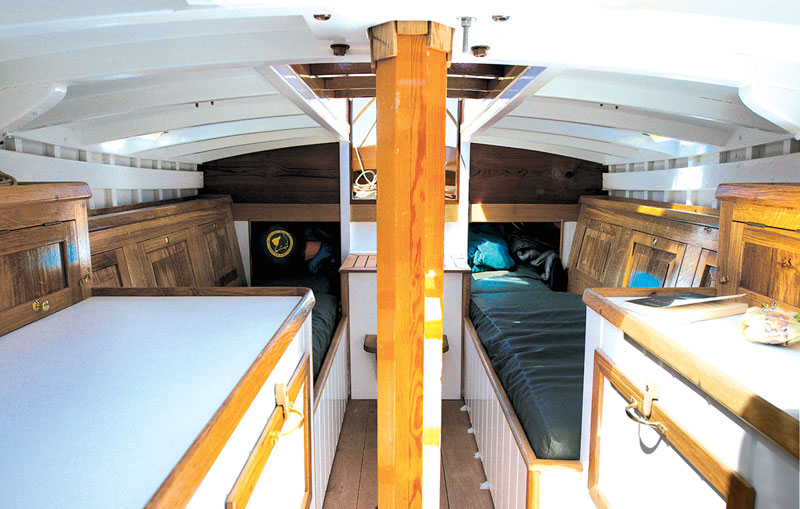 Tea for Two and a Loo with a View

The lockers on either side provide ample storage; an icebox and stove could also fit in this space. This is the view aft while seated on the head, though some might prefer to fit a curtain between the head and the galley.

The brightwork belowdecks is of Cornish oak from the nearby Tregothnan Estate, a historic site best known for supplying the first-ever home-grown British tea. Ben milled the wood himself. 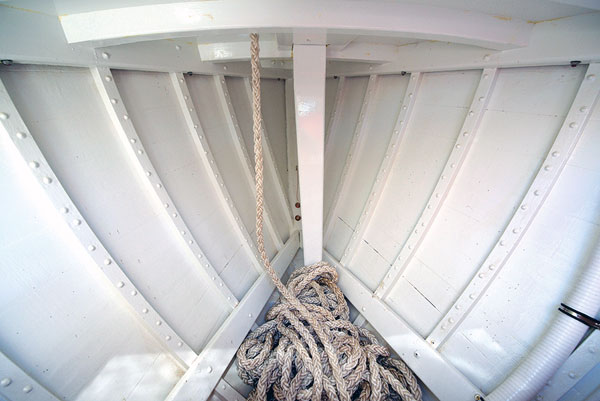 The hull was built of larch planks on steam-bent oak frames, fastened with copper rivets. The sheerstrakes, garboards, and all of the backbone timbers are of oak. This is the view forward into the anchor rode locker. 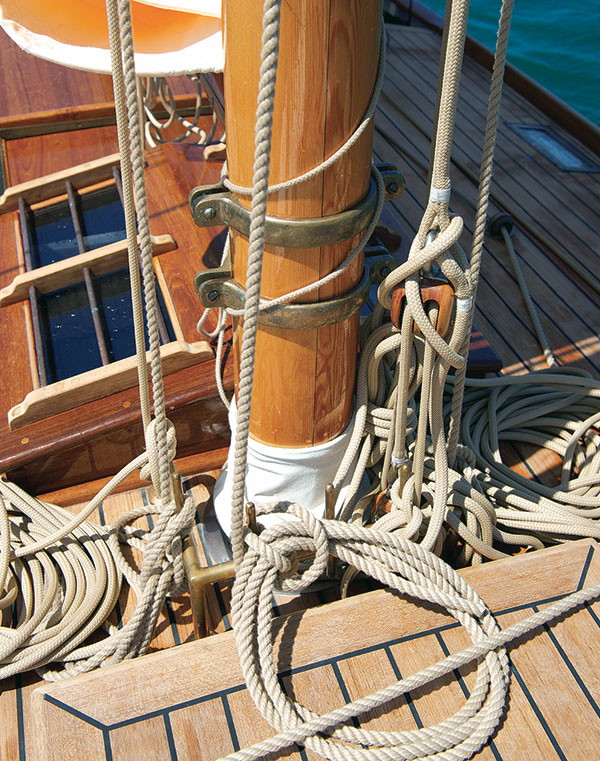 The mast’s running rigging is belayed to the bronze fife rail. The mast itself is made of Douglas-fir sourced from Stones Marine Timber in Salcombe. The lines are made of pre-stretched three-strand polyester buff and braided polyester buff from English Braids. 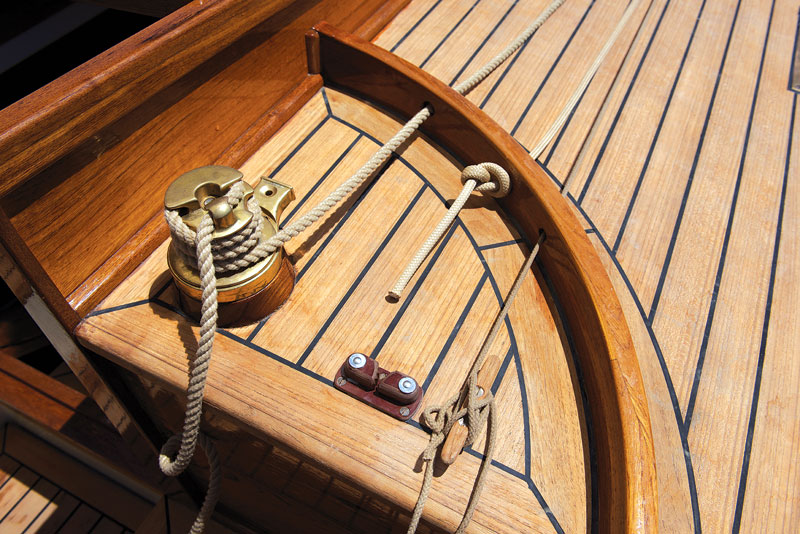 For the deck, Ben was lucky enough to find a pile of surplus teak at a nearby cabinet shop that he was able to buy at a reasonable price. The forward cockpit coaming, which neatly finishes off the ellipse, was made of the same wood, laminated and glued with resorcinol.