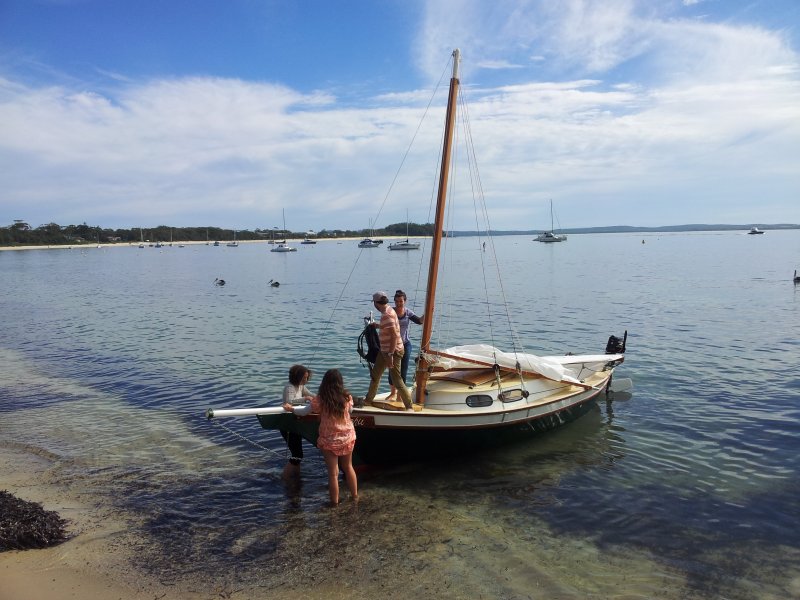 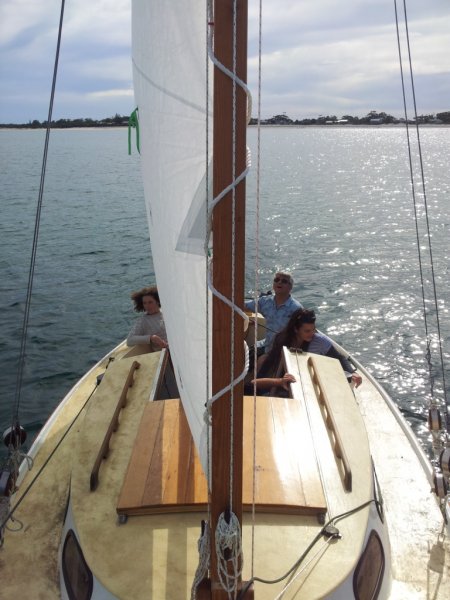 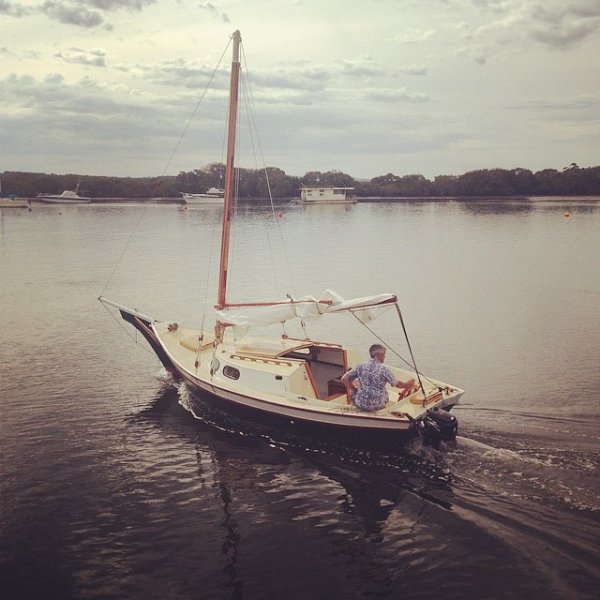 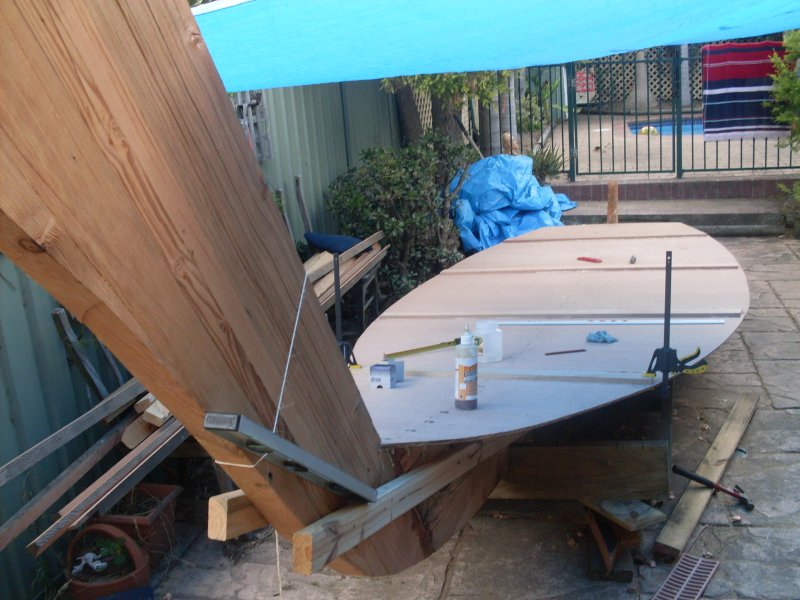 Gerrard O’Leary of Tenambit, New South Wales, sent us news of the launch of his Stevenson Vacationer, OKAHU. He writes, “On the 25th of April this year I had the supreme pleasure of standing on the deck of and launching the boat I have been building for the previous three years, four months, and eleven days, roughly! My wonderful, patient family were nearly all there and my wife Tracey did the honours with the bubbly and it felt pretty damn good!”

On choosing the plan, he tells us, “I must caution your readers that I have built a sacrilegious vessel in the eyes of many a shipwright—nothing less than a Stevenson's Vacationer. After many years of trawling through magazines and design study plans I finally decided to build something that (like all boats) was a compromise to all those bits that go into your thinking cauldron when considering what design will best suit your needs. I zoomed in on the Vacationer as a project that would suit my end desires: available time and finances and most importantly, my totally irrational ascetic sense: a trailerable camping/cruising yacht with a nice line and plenty of wood. The gaff rig, bowsprit ,and wooden wheel just took the cake.”

Gerrard shared some of his sailing history with us. “I began my sailing in the early 1970s in a beautiful Hartley 18 on the equally beautiful Waitemata Harbour in Auckland, New Zealand, from whence I came. I have owned and borrowed other fine sailing vessels over the years that our four children were growing up here in Australia, where I have lived these past 30 years with my Australian wife. We are blessed with fine inshore harbours nearby and have had many wonderful sailing ventures together in New South Wales and as far afield as Queensland. I had bought a fine 18′ trailer-sailer named SWIFTY in which we had many of these fine adventures as a family and with friends with similar yachts, but just kept coming back to the plain truth that it was a...‘plastic boat’! I just had to make timber under my sailing feet happen! I had built a couple of stitch-and-glue canoes and a 10′ dinghy over recent years and finally bit the bullet, sold the lovely SWIFTY, and away I went. After a really enjoyable period of planning, buying all that lovely secondhand Oregon cedar and other timbers—including some beautiful Huon pine, and then actually building the boat, it was a truly good feeling to stand on the deck as she slipped off the trailer into the beautiful waters of Port Stephens (at one of our favourite little towns, Tea Gardens).”

In assessing OKAHU’s performance, Gerrard notes, “She was much less tender than I imagined right from the start and I have had the best time tinkering with the rig and other bits and pieces over the last few months. Although being winter here, I’ve only been out half a dozen times so I can’t say I’ve put her through her paces yet. She has a great feel on the water, however, and with her ample beam is a comfortable cruiser. The ship’s wheel was the very first thing I constructed for the build and I know it’s a bit unnecessary on a yacht this size, but I am loving the feel of it! I have so far left the main cabin fairly open with only a couple of small cabinets built-in, as I was was planning to use blow-up mattresses for camping. My wife is pretty keen on a slightly raised berth set-up though, so I will be attending to that shortly! I will add that at present I have installed two of the great canvas seats as seen in your magazine recently. One of my daughters ran them up on the sewing machine and they are a really comfortable option for a cabin with little headroom.”

He adds, “I have not, as I said, put her through her paces as yet but I will say that so far I am more than happy with her sailing feel. She will never be a racer (I didn’t want one) although I have been more than happy with her speed so far. She won’t point very high with her full-length keel, but she tracks beautifully true through the water. The gaff is a great sail to use (my first experience with one in a boat this size) with plenty of power, but quick to control, which is a must for this unballasted design. She’l also need a prudent skipper on the main sheet for all of her sailing life since although she has great initial stability, I’m sure she would go right over if powered through a big gust.

“I am very pleased with my new yacht nevertheless and have named her OKAHU after the bay I grew up on in Auckland. That was where I first fell for the shape of a fine yacht and the smell of red lead (yes, that’s how old I am!) as I mooched around the old marina and hard stands of Orakei. I’m glad I chose Mike Stevenson’s design and am happy with my finished (is a home made boat ever really finished?!) product — and yes, my very talented shipwright mate is still talking to me in spite of my choice of yacht and my workmanlike finish policy!”