A Gallery of Peapod Lines

Text and illustrations by David Cockey

As noted in WB No. 284 in my article accompanying Ben Fuller’s “The Maine Peapods,” I have been conducting an ongoing study to compare the shapes and performance characteristics of a variety of these classic double-ended Maine workboats. In this extended content section, the lines plans published in the article are presented with 12 additional historic boats.

The study began with design information from available boat plans. More recently, I’ve used photogrammetry to measure existing peapods for which plans are not available, focusing on examples in the collections of the Penobscot Marine Museum, Mystic Seaport Museum, and Maine Maritime Museum. Among the characteristics analyzed are load-carrying ability, stability, and resistance, with the boats presented in a consistent lines-drawing format.

For each peapod, the process began with the creation of a digital model of the outer hull surface using Rhino3D software, which can be thought of as a “virtual half model” of the peapod. Several aspects of each boat’s performance were analyzed using Orca3D software, and a full lines drawing for each prepared. The 14 peapods included here were selected to represent a range of sizes and shapes. All are primarily rowing designs, although several have been sailed.

The digital hull models were sectioned to obtain data from which the lines plans could be constructed, with consistent spacing and locations for each peapod to facilitate comparison of their shapes. For each boat, stations are spaced 12″, waterlines 3″, and buttocks 6″. The basepoint is the middle of the boat at rabbet height. In the captions below, only length overall and beam are shown, since other measurements can be highly variable based on loading.

The weights shown are estimates based on the surface area of each hull with the center of gravity at the centroid of the hull surface area. Freeboard was calculated for payloads from 100 lbs to 1,000 lbs.

To calculate initial stability—meaning the boat’s sensitivity, when upright, to shifting weights—was calculated for varying payloads. The payloads were centered, with the center of gravity of each set 18″ above the rabbet. This allows the calculation of “righting moment,” a measure of how strongly the peapod attempts to return upright. In this case, the calculation for all the boats involved a heel of 1 degree from upright. A larger moment means the peapod will be stiffer, and smaller one means it is more tender. For the stability comparison graphs, the righting moment for varying heel angles was calculated for a payload of 300 lbs, centered with the payload center of gravity 18″ above the rabbet. The curves end at the heel angle at which the peapod would begin swamping.

The resistance graphs show drag with a payload of 300 lbs, estimated for speeds of 0.2 knots to 3.5 knots using an analysis known as “the Holtrop method,” originally developed for ship analysis to estimate drag based on a number of hull characteristics. The method doesn’t work as well for small vessels such as peapods, but because the method was applied in a consistent manner from one peapod to the next, the comparisons are believed to be valid. Below 2.5 knots, drag due to wavemaking is insignificant and the drag is almost entirely due to viscous drag over the wetted surface. At higher speeds, wavemaking drag begins to be significant but is less than half the total drag at 3.5 knots.

The lines drawings and comparison graphs that follow compare these boats, with the graphs for each showing a darker line highlighting how the peapod in that drawing stands compared with the others. Click on an individual drawing to enlarge it, and use the “back” arrow to return to the layout.

David Cockey’s interest in traditional boats and boatbuilding began as a teenager in Maryland. After a career in automotive research and engineering, and his wife several years ago moved to Maine, where his activities focus on boat design and documenting historic boats. 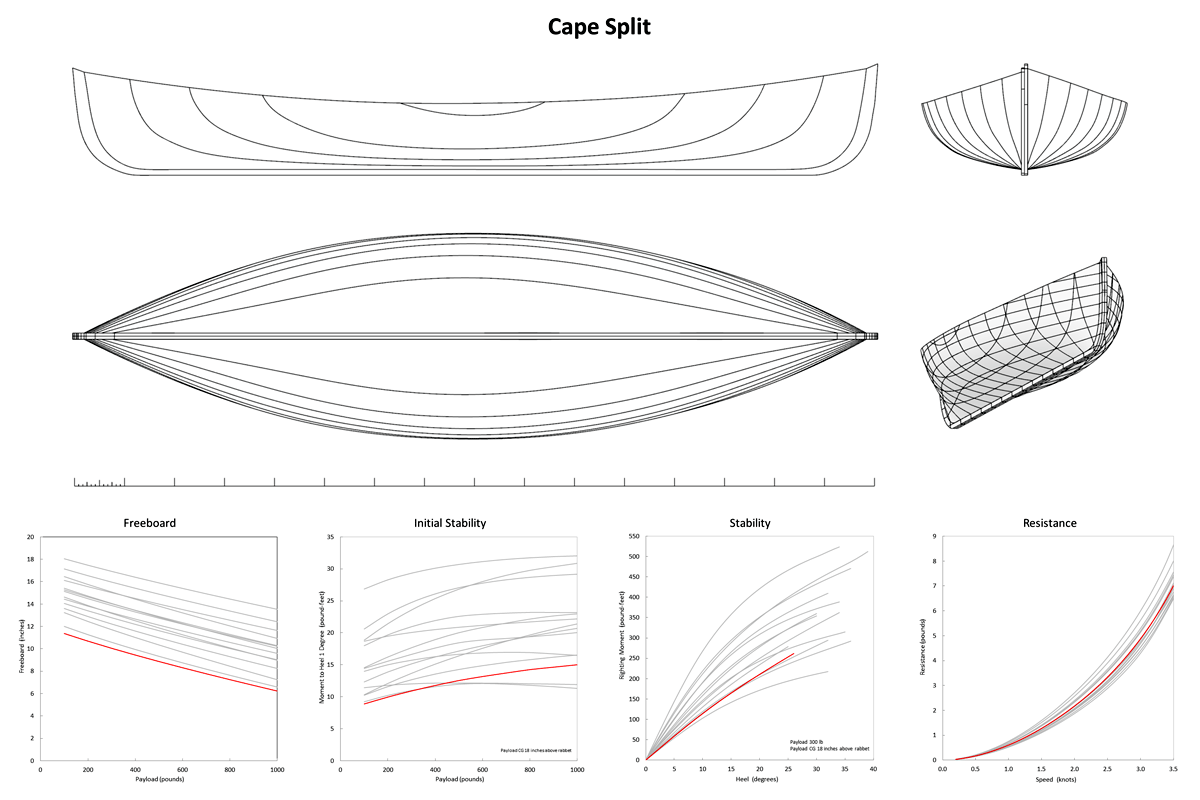 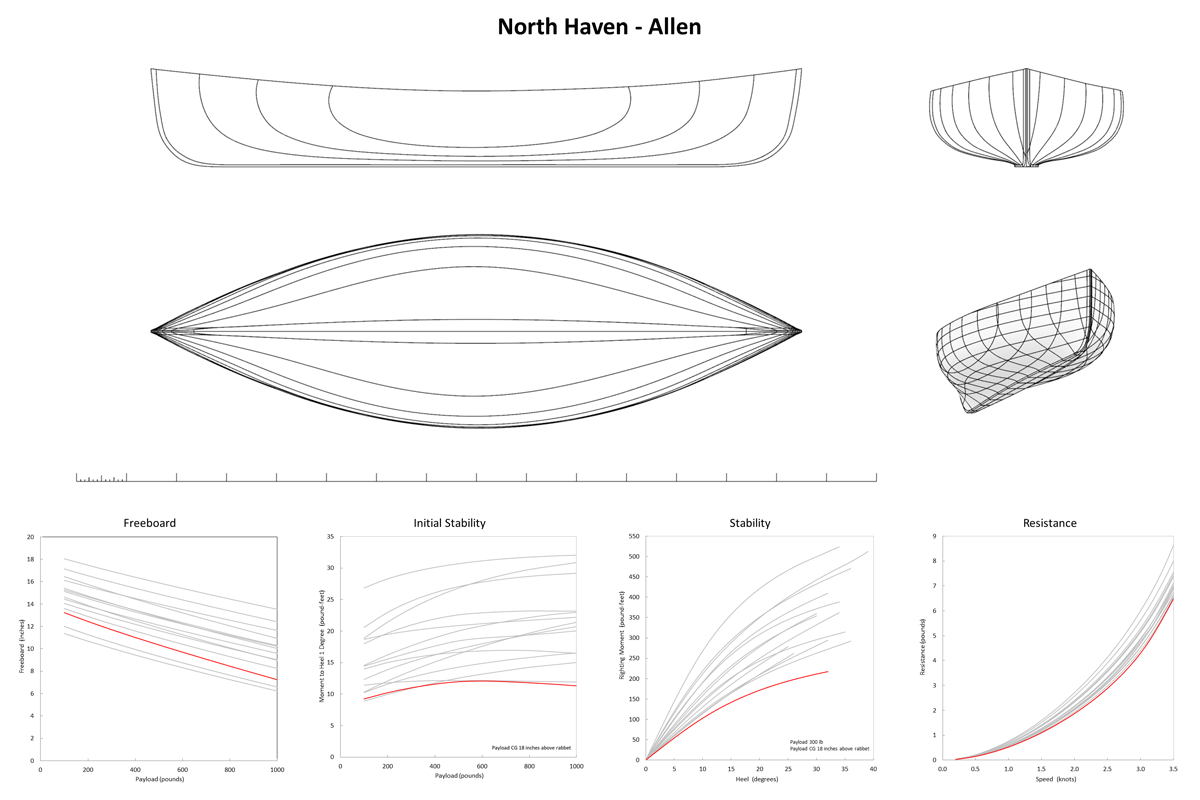 2. North Haven (Allen)—13′⅝″ x 3′9⅞″. Estimated weight, 240 lbs. From North Haven, Maine, built circa 1885. Owned by Frederick C. Allen and used as a supply boat for Bartlett Harbor on North Haven, with a haulover between Southern Harbor and Bartlett Harbor. Lines and analysis model are based on plans by David Dillion. 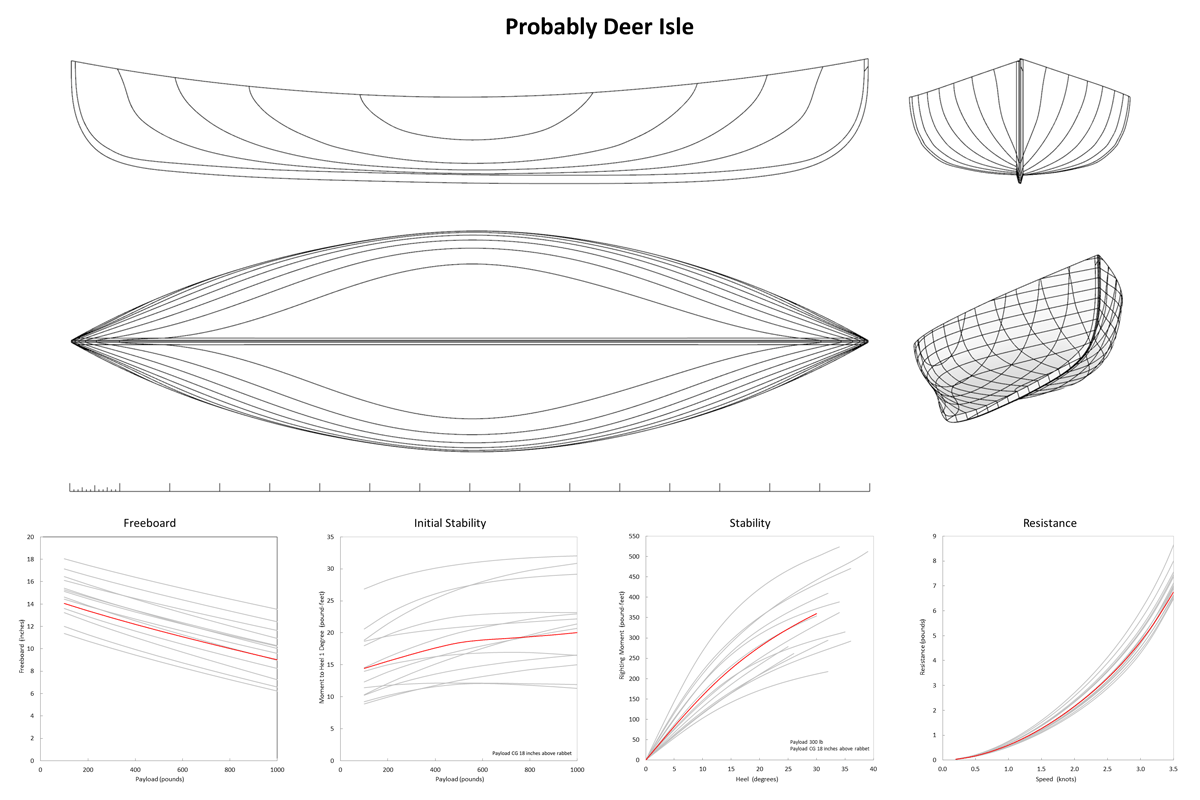 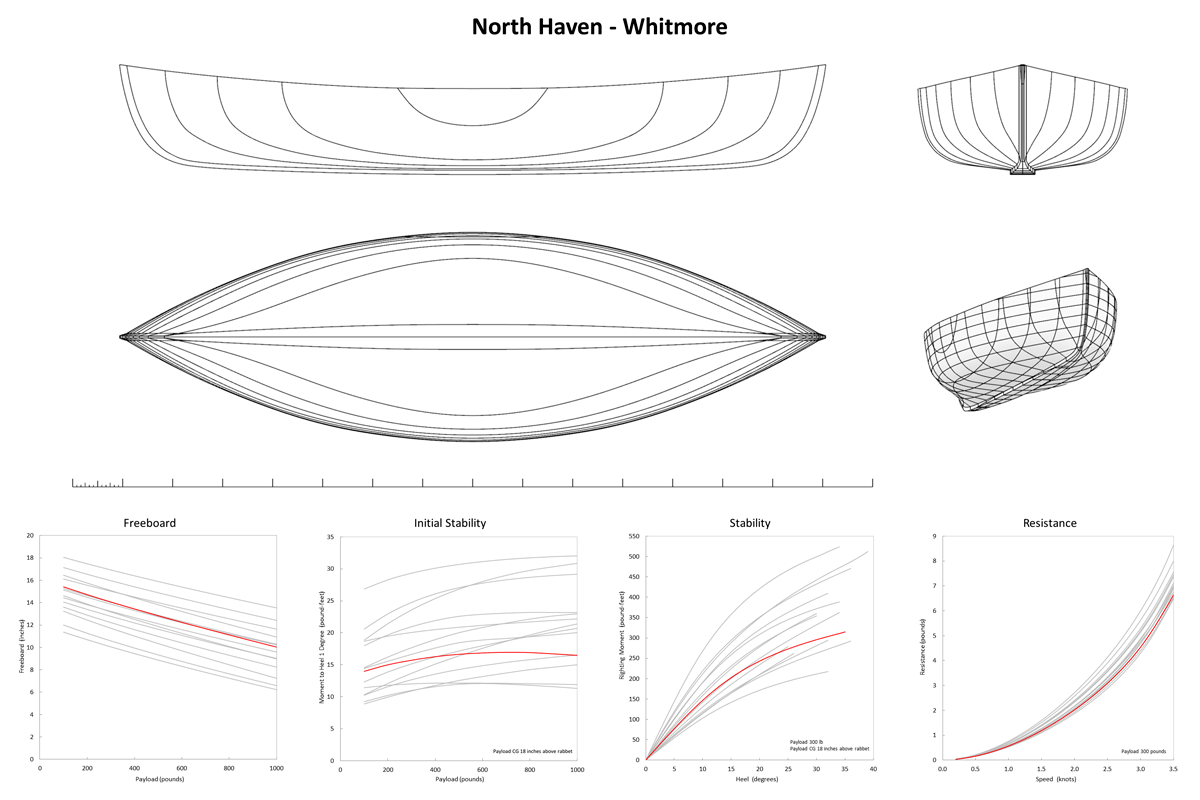 4. North Haven (Whitmore)—14′3″ x 4′2¼″. Estimated weight, 285 lbs. Built by Alton Whitmore on North Haven, Maine, circa 1929 for a local fisherman and later owned by John Gardner. The original boat is in the collection of Mystic Seaport Museum (1985.135). Lines and analysis model are based on plans by John Gardner, published in Classic Small Craft You Can Build, pages 74–77. 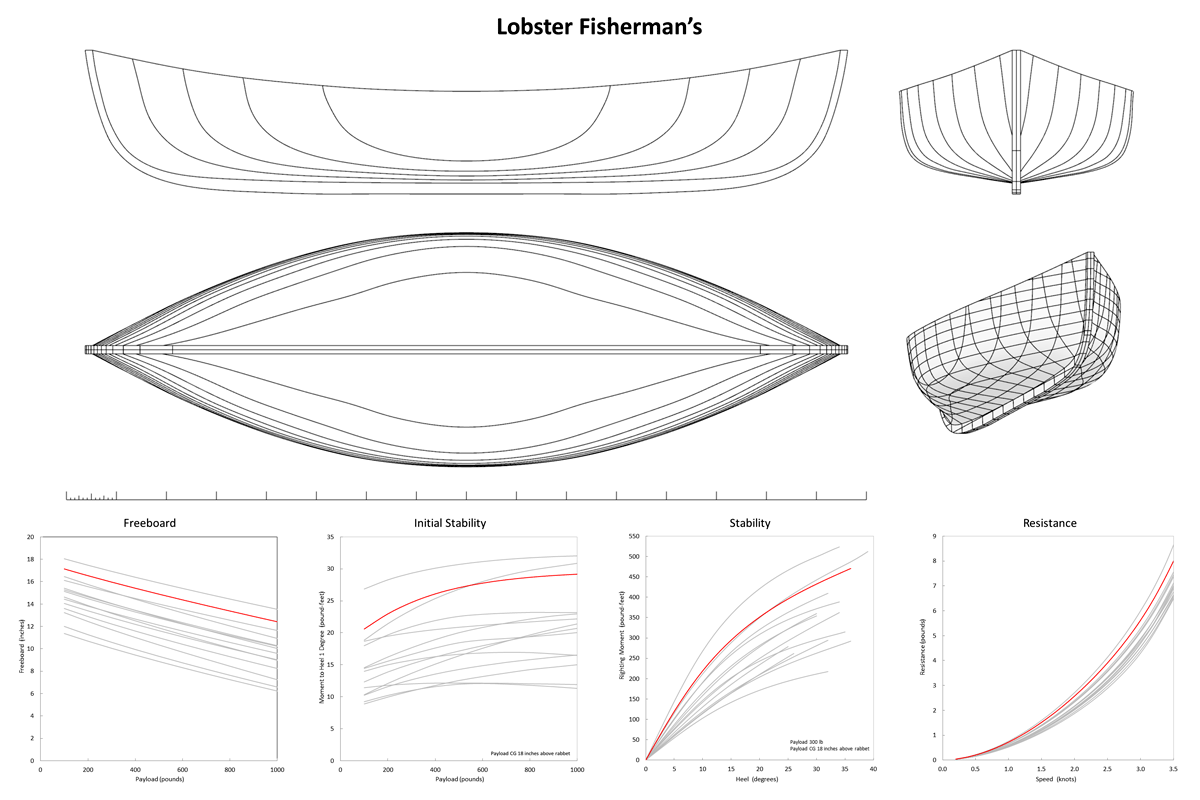 5. Chapelle (Lobster Fisherman’s Peapod)—15′3″ x 4′8¼″. Estimated weight, 365 lbs. This peapod is shown in American Small Sailing Craft by Howard I. Chapelle, Figure 82. The lines and analysis model are based on those plans as well as lobster fishermen. Chapelle describes this peapod as a type also frequently used by lighthouse keepers. His plans, dated 1933, are stated to have been traced from builder’s plans. 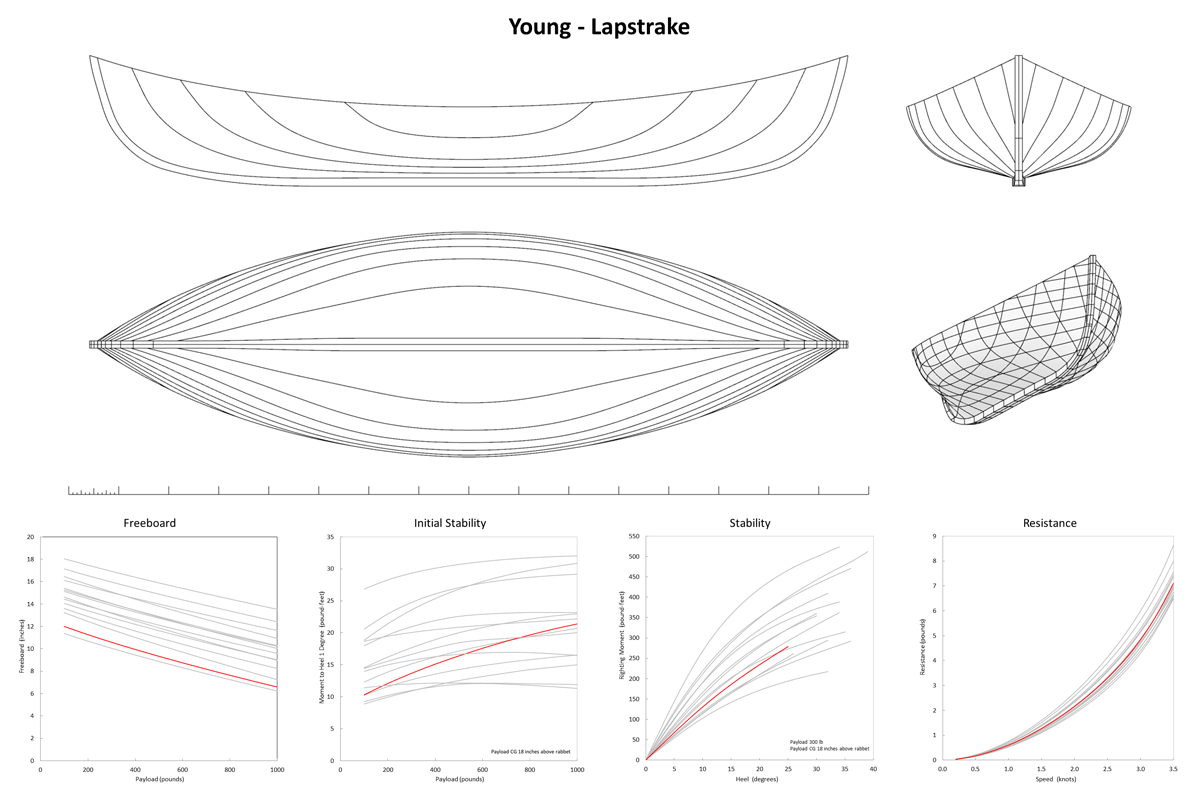 6. Young (Lapstrake)—15′ x 4′5″. Estimated weight, 295 lbs. Built circa 1925 by Leon L. Young on Matinicus Island, Maine. The original boat is in the collections at Penobscot Marine Museum (1959.180). Lines and analysis model are based on plans by Robin J. Molloy. Maine Maritime Museum has a very similar peapod built by Merrill Young, son of Leon L. Young, in 1964. Ducktrap Woodworking sells plans for a similar peapod based on molds used by Merrill Young. 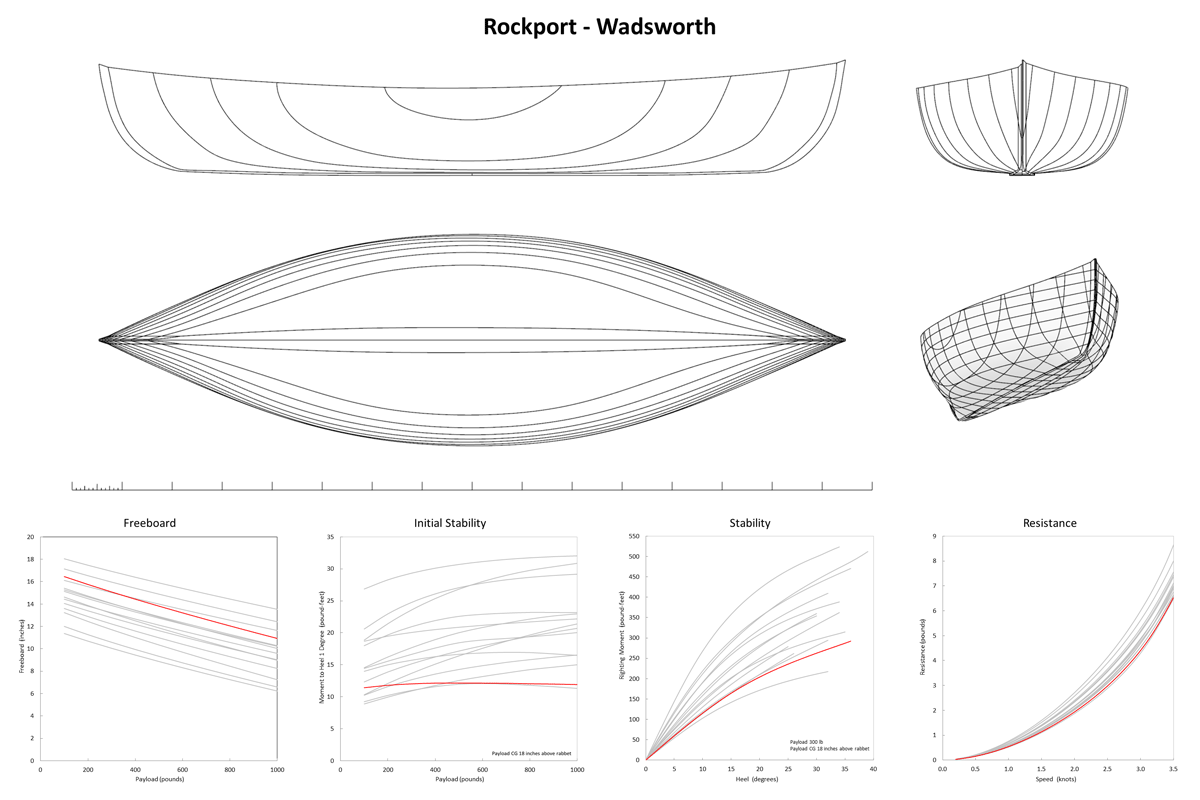 7. Rockport (Wadsworth)—14′9⅝″ x 4′3″. Estimated weight, 300 lbs. Built circa 1940 in Rockport, Maine, by Mark Wadsworth, who learned from Alton Whitmore. The original is now in the collection of Penobscot Marine Museum (1990.8). Lines and analysis model are based on plans by David Dillion. 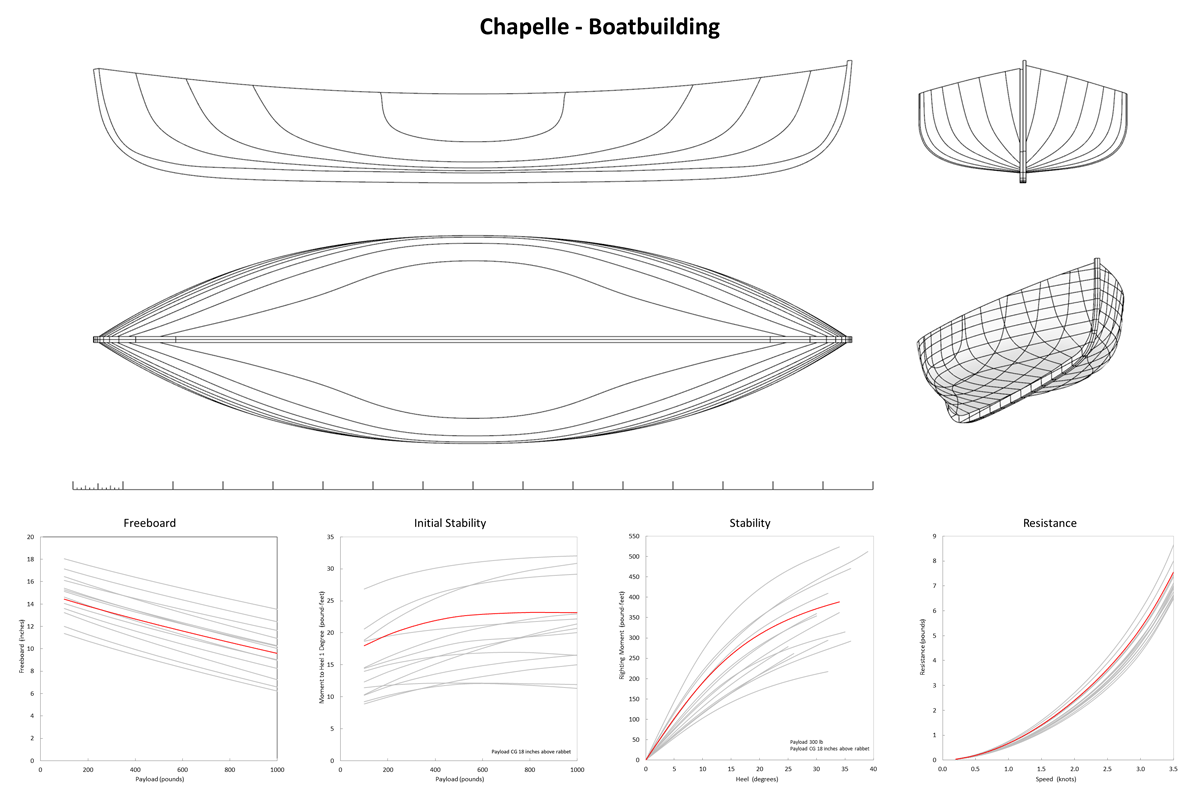 8. Chapelle (Boatbuilding)—15′2″ x 4′2″. Estimated weight, 320 lbs. Designed by Howard I. Chapelle in the late 1930s after spending time in Maine. John Gardner quoted Chapelle as describing it as a typical lobsterman’s rowing pod. Lines and analysis model are based on Plate 56 in Chapelle’s book Boatbuilding. 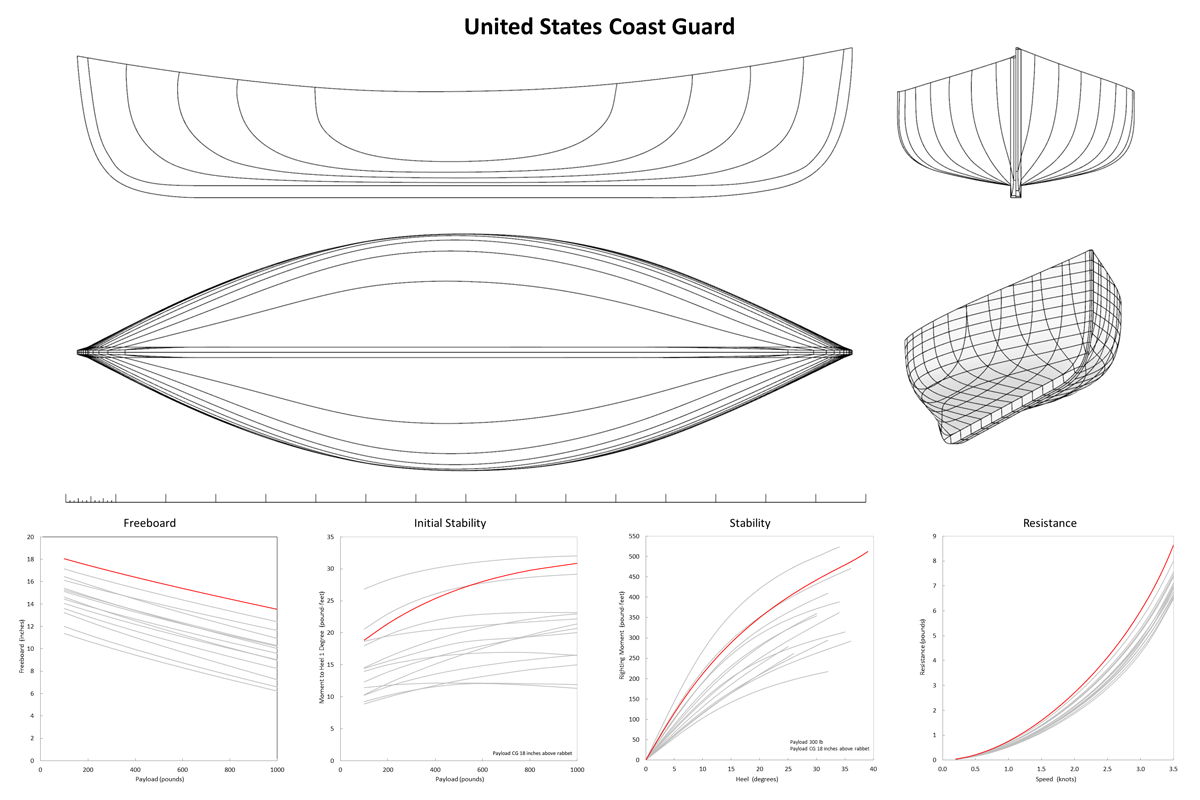 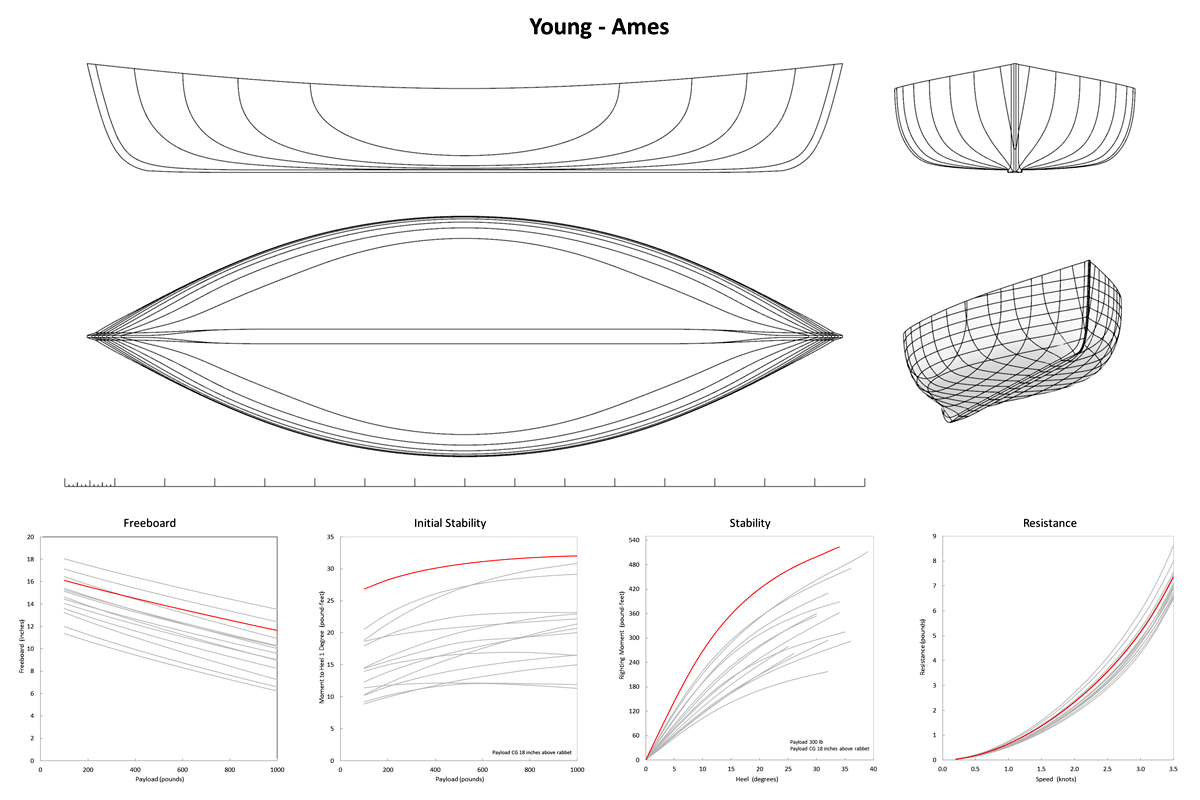 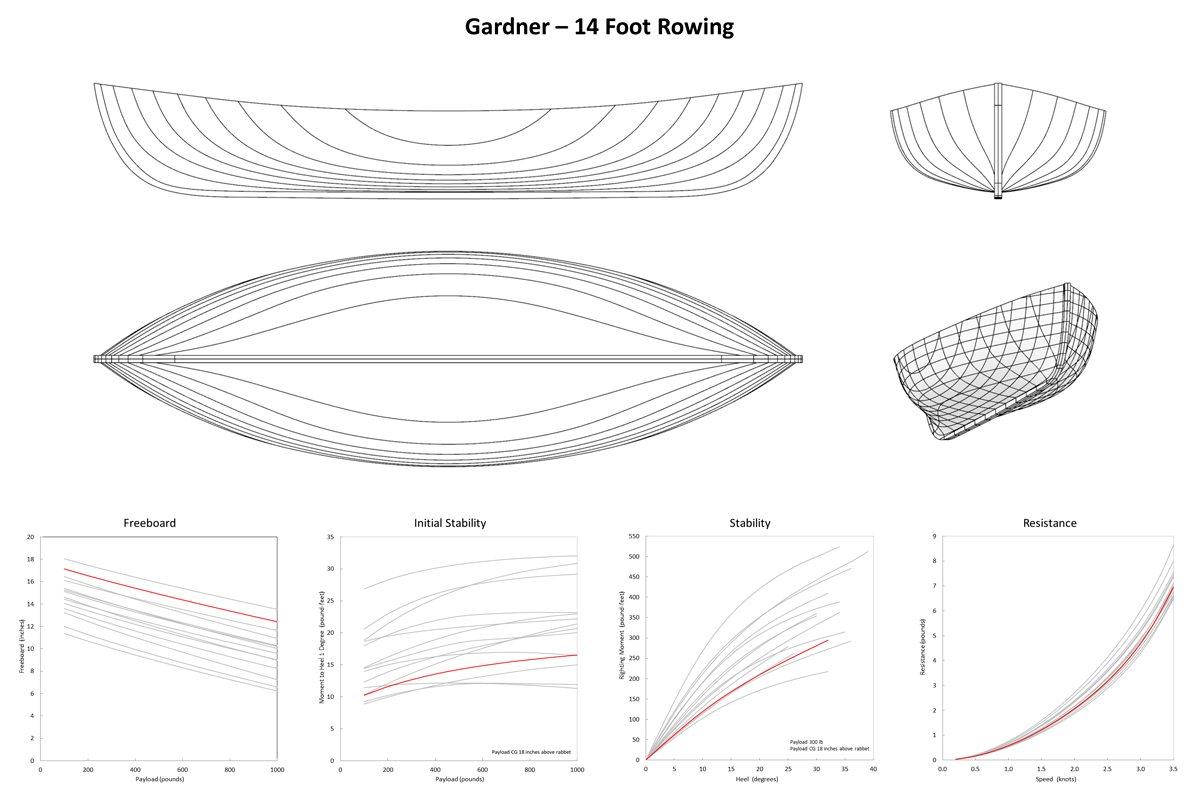 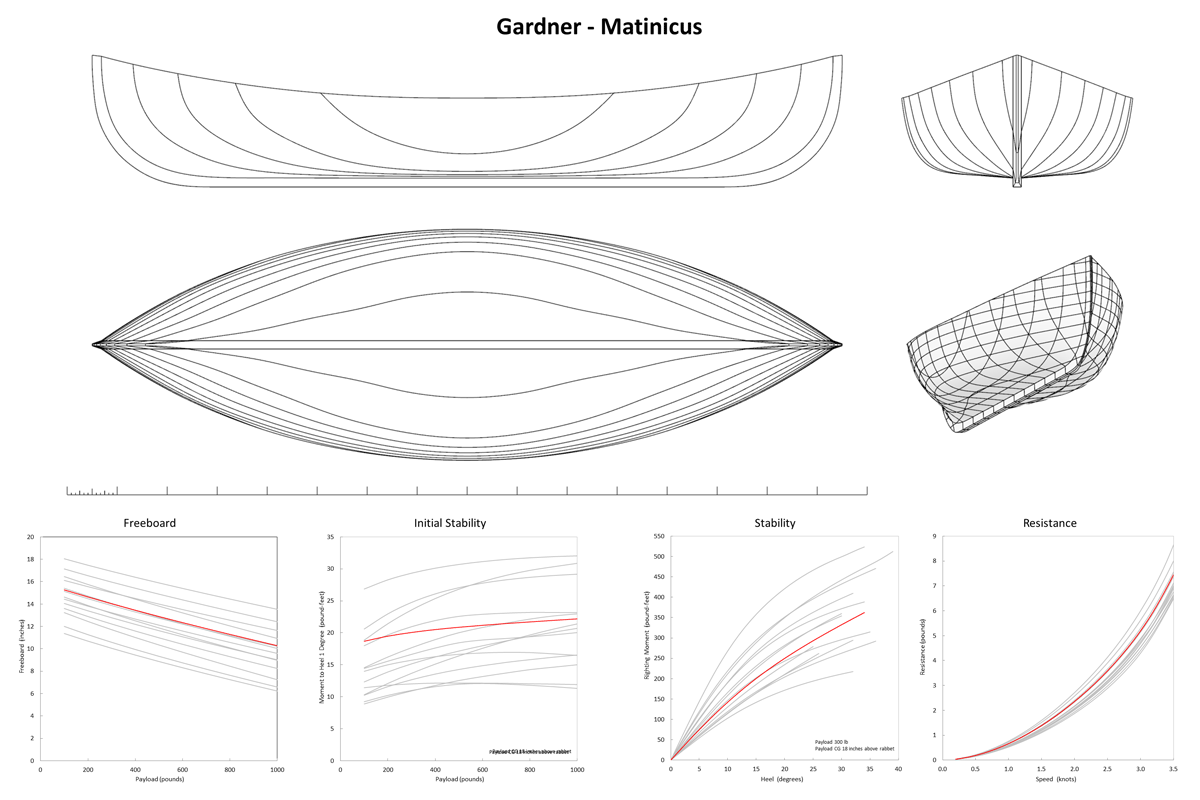 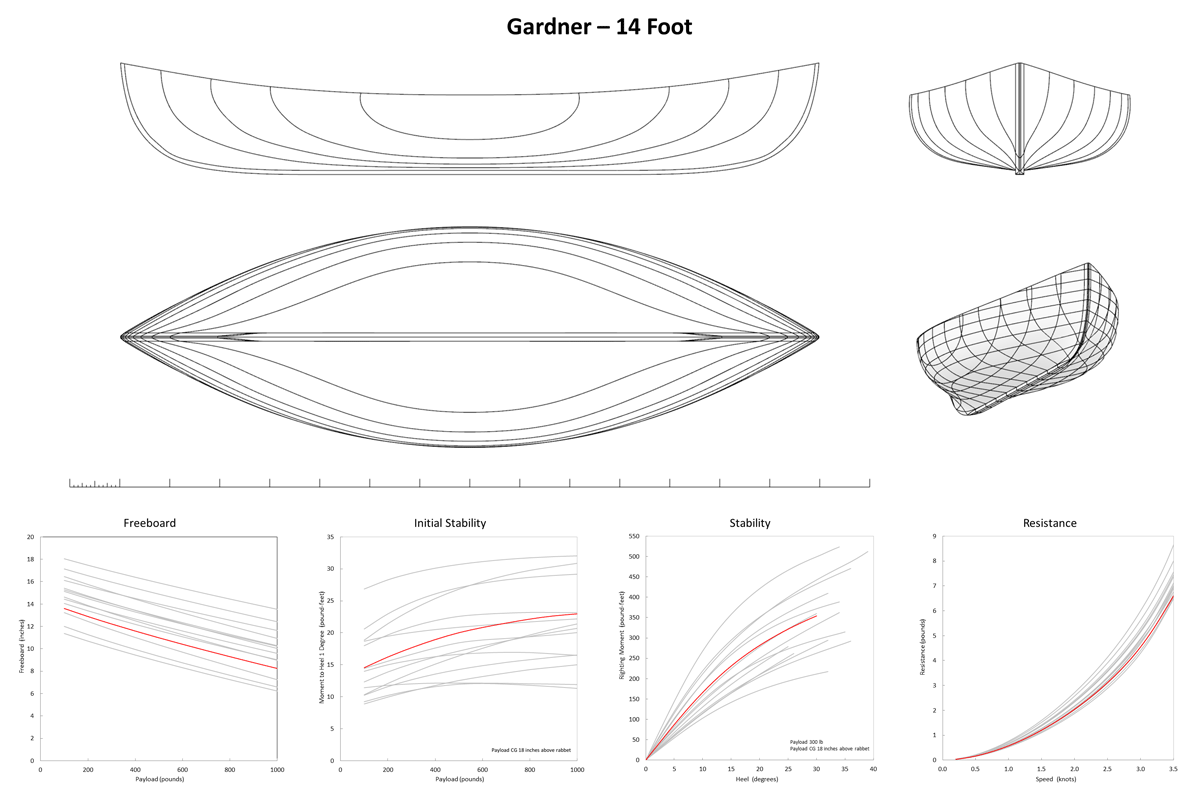 13. Gardner (14′ peapod)—14′ x 4′5″. Estimated weight, 275 lbs. Designed by John Gardner in 1971 for a recreational boatbuilding course at Mystic Seaport Museum, where the original boat remains in the collections (1971.727). Lines and analysis model are based on plans in Gardner’s Building Classic Small Craft, pages 136–137. 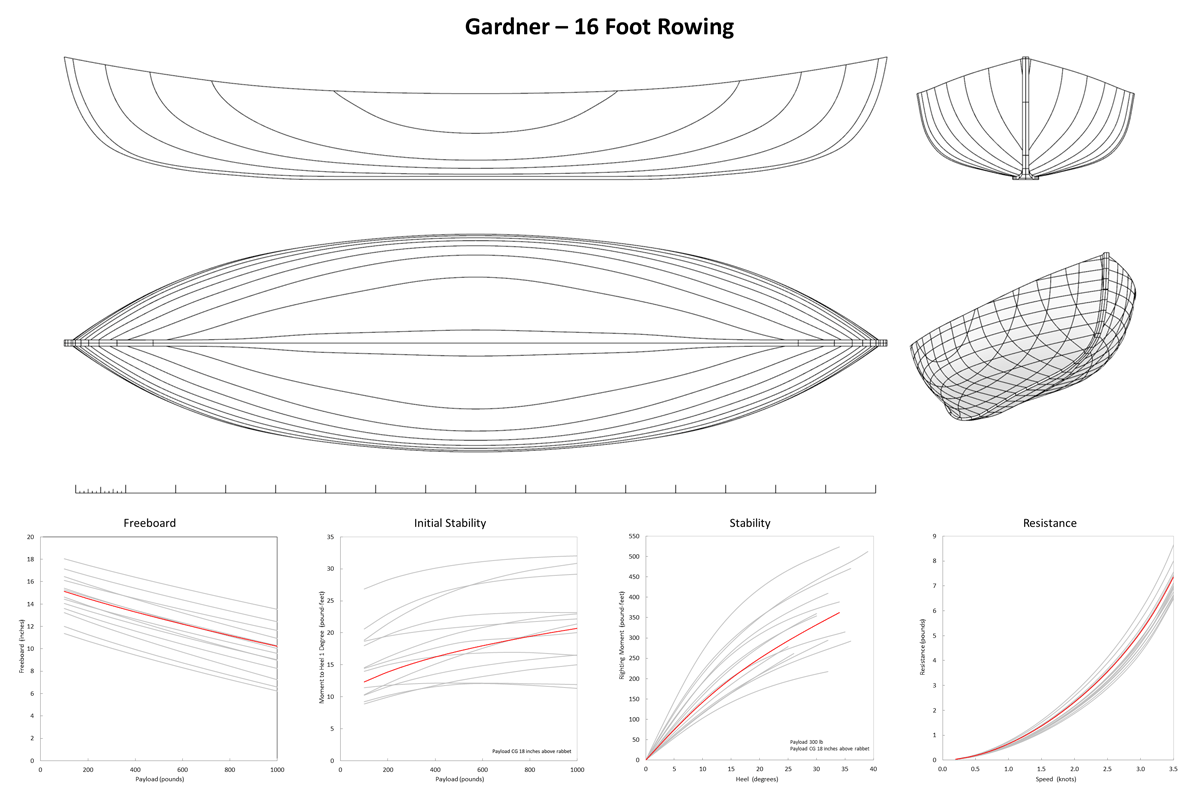