This article appeared in WoodenBoat magazine, Nov/Dec 2016 No. 253.
Text and photographs by John Pratt.

Most boats 16′ and over are, very sensibly, required by the U.S. Coast Guard to carry day and night visual distress signals, and until recently the only option for boaters to properly meet those requirements was to carry pyrotechnic flares. Regulations for an electric signaling device have been on the books for some time, but the technology was not available to make a practical device possible.

Now, however, there is a choice. The SOS Distress Light, by Weems & Plath, is an electric signal light that is fully approved by the Coast Guard for nighttime use. In addition to the light, the package includes a durable orange signal flag that meets the requirements for a daytime distress signal. These two items together provide a complete solution to meet the Coast Guard’s visual distress signaling requirements for recreational boaters.

Pyrotechnic distress flares, using a well-proven technology that has been around since the 1800s, have saved many lives over the years. When most people think of flares, they probably think of them as a way to attract attention after an emergency aboard. Maybe what comes to mind is the vision of a flare launched into the night as a vessel sinks beneath inky waters, the desperate signal being sighted by watchful eyes on the bridge of a distant ship. However, data show that assistance these days is most often summoned by other means. According to the Coast Guard, from 2003 to 2010 fewer than 1 percent of searches were initiated by the use of pyrotechnics, and fewer than 20 percent of those searches were ever resolved—the rest of the flare reports are mostly attributed to hoaxes or misidentification of other phenomena. Still, pyrotechnic flares are useful, so why seek an alternative? Unfortunately, they have a number of problems: they degrade in storage, use hazardous ingredients that are difficult to dispose of properly (see sidebar), present the risk of burns and fire during operation, and provide relatively short signal duration. The SOS Distress Light offers significant advantages in all of these areas.

Possibly the most attractive benefit of the SOS Distress Light is that it is a long-term solution to fulfilling the Coast Guard’s visual distress signaling requirement. Unlike flares that need to be replaced within 42 months of their date of manufacture, the Distress Light should still be functional decades from now. From the double O-ring seal on the battery compartment to the durable foam float collar, it appears to be well built and feels rugged enough to endure. It runs on inexpensive, readily available, recyclable, user-replaceable C-sized alkaline batteries. Just change those out every so often (the company recommends a change every year) and you’re good to go. This greatly reduces the environmental impact of your boat’s required signals, since alkaline batteries can be fully recycled, and programs are already in place to do so in most areas. After removing the year-old batteries from my Distress Light, I plan to use them in a regular flashlight before they get sent for recycling.

I have some concern about battery leaks, but this should not be a problem as long as fresh batteries are put into the unit regularly. Due to changes in internal chemistry, alkaline batteries tend to develop leaks as they become discharged. New, fully charged batteries have a very low probability of leaking. Still, I will probably have a look inside the light from time to time since opening it up is so easy. There is a platinum catalyst inside the battery compartment to absorb any hydrogen that might be produced by the batteries as they discharge.

Operation of the SOS Distress Light is as simple as can be. To activate it, one simply twists the cap clockwise until the light comes on. I take comfort in the fact that I can activate this signal in the dark, even with numb or gloved hands. I can also show the Distress Light to anyone else who comes aboard, give them only seconds of instruction, and know for sure that they will be able to activate it if necessary. The Distress Light may also be activated for testing or training, which is a reassuring feature for a piece of safety equipment.

During operation, the Distress Light produces no noticeable heat, as opposed to handheld pyrotechnic flares, which present a very real fire hazard once lit. They spit flames and drip blobs of white-hot molten slag while signaling. The slag can cause serious burns, start a fire, or put a hole in your life raft or PFD. Some flares are worse than others in this respect, but all are infinitely worse than the SOS Distress Light. Thanks to its cool operation, this light may be safely hand-held, tethered and put in the water where it will float upright, or hoisted aloft in the rigging for greater visibility. In all cases, it can then be left alone to do its job, leaving you free to try to improve your situation.

The Distress Light is a very different type of signal than a pyrotechnic flare. Given the fact that it runs for up to 60 hours and can be left to run unattended, it could possibly attract the attention of someone who might not have been in the right place or looking at the right time to see a short-lived flare. Though not as bright as a flare, it is bright enough that I don’t want to look at it directly, even outdoors in daylight. The claimed range of visibility at night is up to 10 miles.

Just think for a moment about how difficult it can be to see any unlighted object in the water at night—even something as large as a boat, and even if you know generally where the object is. One of the most effective uses of visual distress signals, especially at night, is to allow rescuers to home in on the person or vessel in distress after first attracting attention with another device, such as an EPIRB, a personal locating beacon, or a VHF radio. For this type of use, a long-lasting, non-directional signal is best, which is exactly what the SOS Distress Light produces. It is a valuable addition to my boat’s complement of safety equipment, and I am delighted to finally be free from having to buy new flares and dispose of the old ones every three years.

Barry Antel, when not sailing or working on his well-traveled 32′ cutter, nourishes his love of boats and the sea by helping others realize their cruising dreams. See www.setforsea.com. 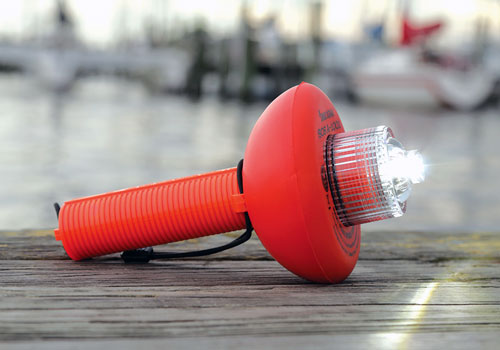 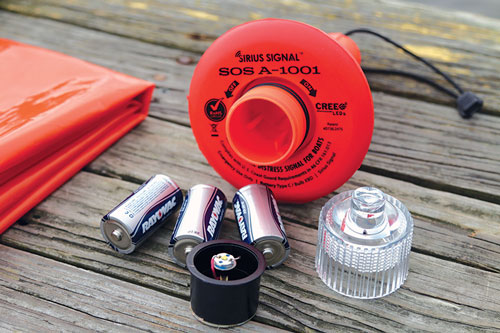 Simple to assemble and maintain, the SOS Distress Light can be activated by crew members of almost any age and experience with very little instruction.

One challenge pyrotechnic flares pose is how to get rid of them once they’re out of date. Flares contain a significant amount of potassium perchlorate, allowing them to burn without ambient oxygen. Perchlorate dissolves easily in water, but then it is very difficult to extract. It persists in the environment, so cumulative contamination can pose long-term threats to drinking water and to the very bodies of water we enjoy from our boats. One study found that the perchlorate in a single highway flare (which is quite similar to a hand-held marine flare) can contaminate up to 240,000 gallons of water. With about 10 million flares expiring each year and no consistent disposal program in place, the problem is serious and getting worse. The best method for eliminating the potential for perchlorate contamination from waste flares is by burning them completely at a proper facility. Lighting a flare so that it burns itself out is the next best option, and this can be done legally at an organized flare day, which also provides valuable hands-on training. The worst thing to do, from an environmental standpoint, is to soak them in water. This dissolves the perchlorate, which can only be removed from water with sophisticated treatment; any contaminated water that is dumped will carry perchlorate with it wherever it goes. —BA