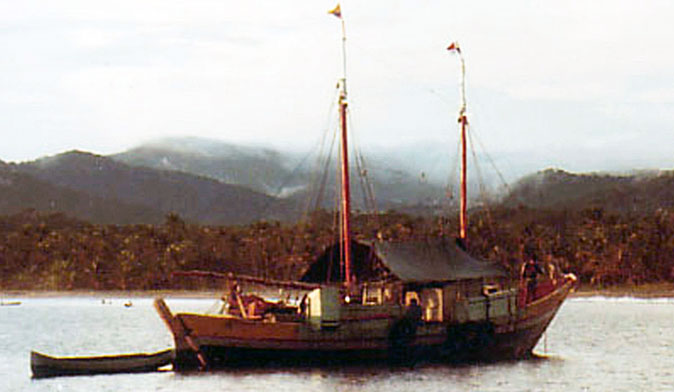 A seamanlike Columbian copra schooner in the San Blas Islands.

In Blog #25 I described visiting ruins in Portobelo, Panama, on the Caribbean side of the Panama Canal. We continued sailing east, beating into the powerful northeast trade winds in my cutter FISHERS HORNPIPE, toward our destination: the San Blas Islands, home of the Kuna Indians, half in Panama and half in Columbia.

The Kuna Indians are a tribe of indigenous people of remarkable independence and durability, fiercely protective of their culture and way of life. They resisted domination by the Spanish Conquistadors with great cunning and fortitude, distinguishing them as one of the only tribes in the new world to escape enslavement and destruction. I wanted very much to visit their archipelago and meet them. 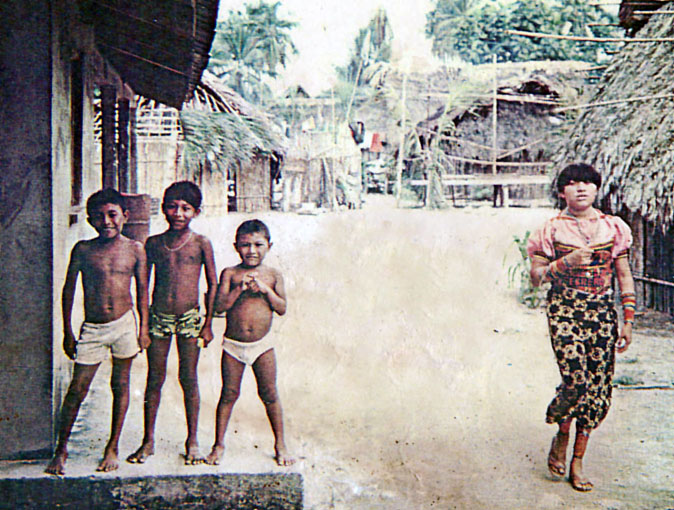 The Kuna’s subterfuge included assisting whatever invading group best suited their own purposes, often playing enemies against each other to their own advantage. When all else failed, they disappeared into the jungle where they could not be pursued. Their territory includes both the islands in the archipelago and land in the adjacent mountains. We were told that tribe members “switched location” periodically, so that all could enjoy both lifestyles.

The Kuna condemned intermarriage out of their tribe (still do), and in 1980 did not even allow outsiders to stay on their islands overnight. Their society is matriarchal, and their laws are vigorously enforced. I learned this the hard way, when two of my crew spent a night ashore… but that’s another story!

Until recently, the unit of economic exchange in the San Blas islands was the coconut. When I visited there in late 1980, the coconut was valued at ten cents USD. The soil and climate in the San Blas Islands are ideal for coconut cultivation, and the resulting crop is among the sweetest-tasting in the world. Kuna Indians are very protective of their coconuts, going so far as to name the individual trees; hence stealing coconuts is a serious offence. Luckily, we were warned in time.

By the late 20th century, “molas” superseded coconuts in economic importance. Molas are reverse appliqué panels, hand-sewn from colorful cotton fabric, incorporated into indigenous clothing, as seen in the woman’s blouse in the above photo. I bought several during my visit, and gave them away to friends and family upon returning stateside.

The Kuna Indians were very aggressive about selling molas to visiting sailors—they descended on FISHERS HORNPIPE in large numbers in dugout canoes, called cayugas, and competed vigorously for our attention. 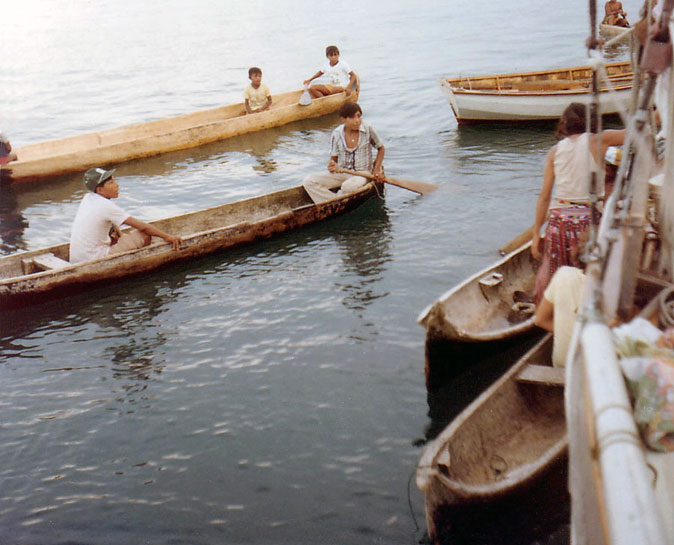 Kuna Indians alongside FISHERS HORNPIPE, vying to sell their wares and services; My dory/tender GANDY DANCER is in the upper right corner.

Among the many wonderful sights in the San Blas Islands, the local trading vessels are what caught my attention the most. These “Columbian copra schooners” were fairly large (about 75’), shoal draft, and double-ended. Their trade consisted of bringing diverse goods to the Kunas (everything from diving gear to canned foods), and trading for coconuts (copra). Copra technically refers to the meat of the coconuts, and also the shells, which are made into everything from tableware to firewood, to say nothing of carved “shrunken heads!” Copra is shredded and squeezed to make coconut milk and cream, and boiled to render coconut oil. The liquid in coconuts is simply very pure delicious water. I have read that coconuts are the most nutritionally complete food on earth, although high in fat. The copra schooners also carried passengers on occasion—two of my crew hitched a ride to mainland Columbia on one of them.

I was unable to get aboard a copra schooner, and I never saw one hauled out, so I don’t know what their hull shape below the water looks like; not even whether they have centerboards or full keels. They also varied in quality from pretty crude (photo below) to very shipshape (first photo). Unfortunately, my grasp of Spanish was too poor at that time to ask many technical questions. I suspect they may have flat bottoms, which might make them the world’s largest sharpies.

A Columbian copra schooner of lesser quality than some that I saw.

We heard rumors that some of the schooners carried more questionable cargos (drugs), and while we were in the islands there was a bloody gunfight between a copra schooner and Panamanian officials, in which several men were killed. We were also told there was friction between the Panamanian government, which monitored the western San Blas Islands, and Columbia, which monitored the eastern islands, even though the Kuna’s tribe and land are legally an “intendencia”—an independent state of indigenous people within the borders of the two countries.

When we were at sea, beating our way east against trade winds of 30 knots or more, into 12’ and larger seas, we saw several copra schooners doing the same, including one which was anchored in those conditions. I believe they all have diesel inboard motors, and generally motor-sail, as do so many contemporary island working craft.

I remain fascinated by these remarkable working sailboats to this day, wishing I could return to the San Blas Islands to study them in depth. I would love to design a cruising version of one, for construction in cold-molded wood/epoxy. The copra schooners were very much on my mind when I designed my double-ended sharpie schooner IBIS. 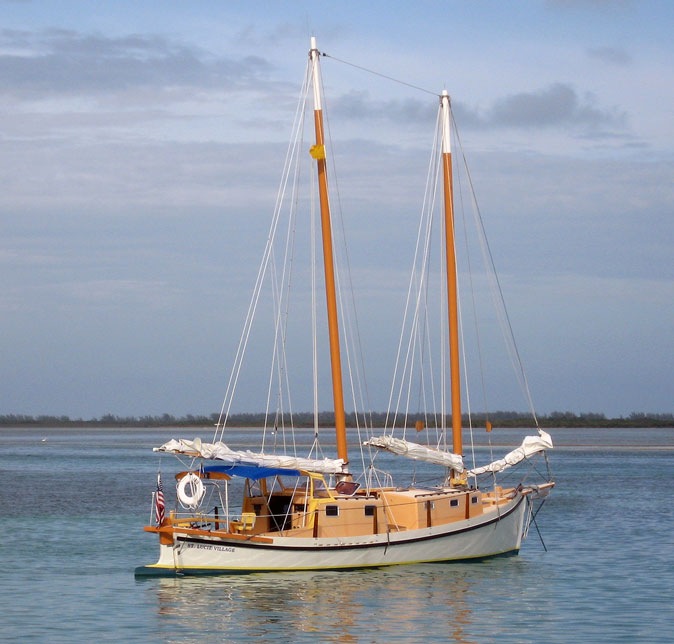 The author’s sharpie schooner IBIS, whose design was influenced by the Columbian copra schooners, anchored off Bimini, Bahamas, in 2012.