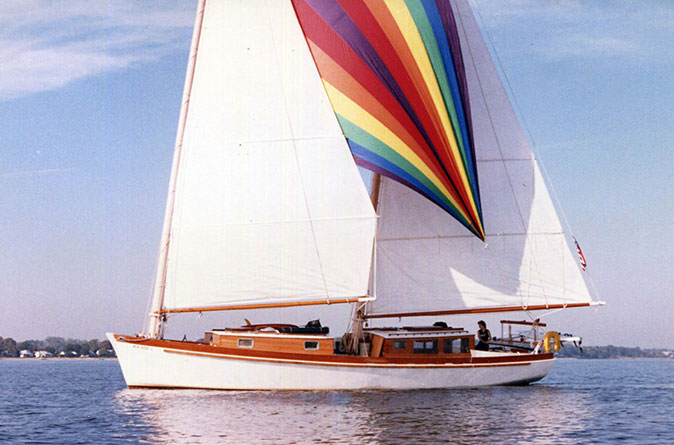 In early 1985 I leased an “abandoned” property on the south side of Windley Key, in Islamorada, Florida. It had three acres, a ruined fishing camp, and a 100-foot private canal and concrete dock. It had vacant lots on both sides, and it was very overgrown with indigenous shrubs and trees, coconut palms and casuarina (Australian) pines. To me, it looked like Paradise Lost! That was before we discovered the fire ants, huge green scorpions, and bull sharks….

I brought with me two of my closest friends and long-term first mates, Eliot Greenspan and Teresa Rodriguez (for whom I eventually named the new boat). I had just finished my design for a shoal-draft 44’ cat schooner—the Exuma 44. She would become my second cold-molded wood schooner to be built, using a triple-lamination method I had developed, which became the cornerstone for my first book, The New Cold-Molded boatbuilding. She would also become my second cruising home, and my first shoal-draft wooden centerboard sailboat. All my previous cruising experience had been limited to FISHERS HORNPIPE (subject of Blog #31), which was her diametric opposite.

We cleared a working area on the land, repaired the fish camp, restored water and electricity supply, and pitched a platform tent out on one of the points. The camp was a one-room affair, with kitchen and bathroom. We fixed it up as an office and living/dining area, but the three of us slept in the tent. My boatbuilding partner Bill Smith, who had worked with me on SARAH in Ft. Pierce in 1984, joined us part time, commuting to the Keys and going home on the weekends.

We pitched a big open-sided tent for a workshop, and began building the boat outside in the excellent weather typical of a Florida Keys winter. 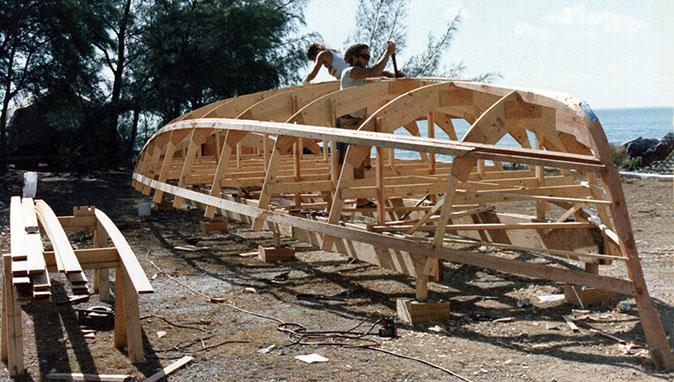 TERESA in frame, with Tere and Eliot working on her “starter plank”—our tent is just visible in the trees behind. 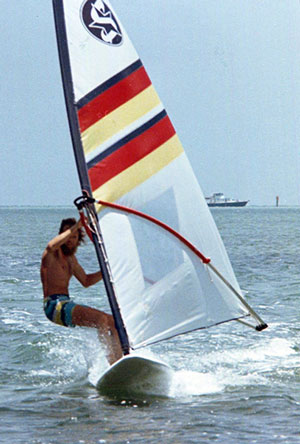 I also hired local people to help us at times, including boatbuilders Doug Gill and Jill Coconaugher, both of whom would work with me on later projects. An Iranian woman named Sholeh joined us near the end, mostly to see what living in a “boatbuilding commune” would be like.

We did have some fun during all the hard work: nude sunbathing and swimming, communal dinners, campfire songfests, love in tents, and windsurfing. I bought a cheap windsurfer at the Dania Marine Flea Market, and Eliot, Tere and I spent frustrating days trying to figure out how to use it… windsurfing is nothing like sailing! It is a fantastic thrill to be screaming over the water, catching a gust, and getting thrown clear over the sail to hit the water at 20 knots! Right next to a 5-foot shark! I finally got to where I could take off from a sitting position on the edge of the dock, and come back 20 minutes later to drop onto the same seat without even getting wet.

We really jammed to finish the boat in time to truck her to Rhode Island for the Wooden Boat Show in Newport. I was ripping right through the money I got from the sale of FISHERS HORNPIPE, and I had to promise final payment to some of my helpers upon the sale of the new boat—and I did have every intention of selling her. I was very stressed out near the end, buzzed on massive doses of caffeine, and it was a miracle that Tere and Eliot didn’t kill me in my sleep… except I didn’t have much time for that—near the end we were working day and night. 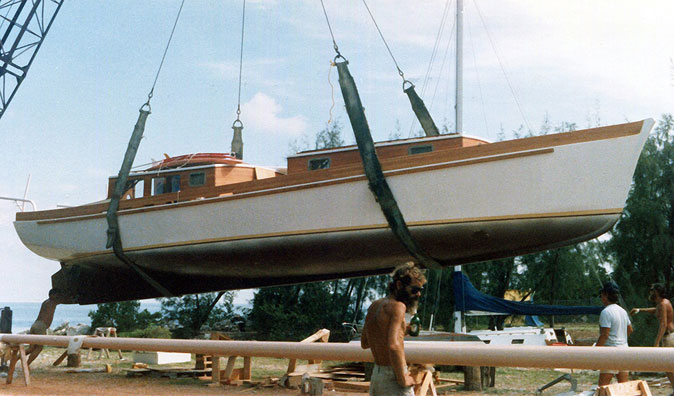 TERESA being loaded onto a trailer for the trip to Rhode Island; boatbuilder Doug Gill in the foreground 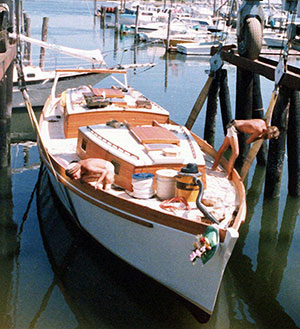 TERESA being launched at Point Judith Marina, Rhode Island, in 1985.

In Rhode Island, we launched TERESA at Point Judith Marina, where I had hauled out the HORNPIPE for her final survey and sale. The yard owners had become my friends, and I have returned there over the years to visit.

I learned the hard way that you are very unlikely to sell a big cruising sailboat at The Wooden Boat Show, and after blowing the last of my money, we departed for the south. On the way we survived Hurricane Gloria in the Mystic River—see Blog #17—and capsized in The Mayor’s Cup Schooner Race—see Blog #18. Despite those misadventures, TERESA turned out to be a fantastic sailboat. She was fast, stiff, reasonably weatherly, easy and fun to sail, and comfortable to live on, though not quite as comfortable as the HORNPIPE (very few boats are). She easily made 8 knots motoring with her twin Yamaha 9.9hp 4-stroke outboards in wells, to the amazement of all the boats we passed in the Intracoastal Waterway. With the outboards tilted up and plugs in place, and nothing dragging in the water, TERESA was a sailing rocket ship, easily reaching speeds of 10 knots on a reach. 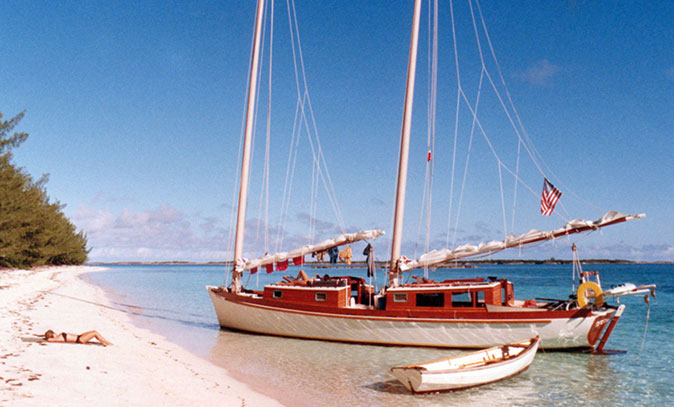 TERESA on the beach at Paradise Island with crewmembers Martha on the beach, and Sarah on the forward coachroof. 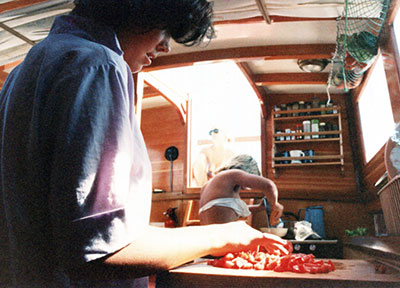 Back in Florida, we picked up some additional ballast in Ft. Pierce, and headed for the Bahamas. We had an excellent first cruise, and the difference in speed and draft made cruising a vastly different experience.

TERESA had a traditional layout, with a “day” cabin aft, and “night” cabin forward. She had four watertight bulkheads as a safety feature, a concept I continue to employ in all my designs. Any cabin can be flooded to the max, and she can still sail or motor home. Her L-shaped galley was large and open, and the whole boat was well-lit and -ventilated. She was a joy to live on.

TERESA was my first boat to be tiller-steered, and I came to like that at least as much as wheel steering—it is direct and positive, providing excellent awareness and feedback… perhaps a little too much feedback, as she has pretty severe weather helm in strong winds if you neglect to reef her on time! 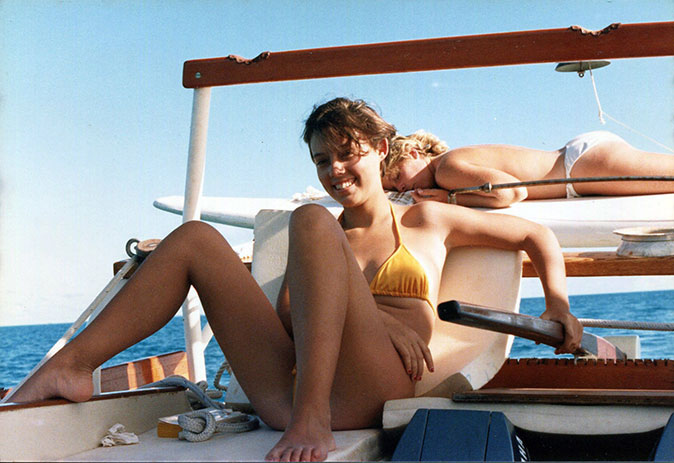 Pagan and Martha sailing in the Bahamas… Paradise Found!—Note the “tiller comb” used to lock the helm; Pagan has sailed with me since age nine.

I lived on and cruised in TERESA for two years, finally selling her to a young couple in the Florida Keys in 1987, who employed her as a six-pack charter boat for the Boy Scouts of America under the name KANGA (they named their dinghy ROO, for which I will never forgive them!). I modified her interior, creating bunk beds in the foc’s’le for the scouts. They in turn sold her to Dave Day, who sailed her to Cuba, and proved how strong her hull is by being driven across two coral reefs in a violent norther, suffering no damage beyond scratches. He eventually sold her to Todd Frizzelle (of Sea Island Boatbuilders), who re-powered her with a Yanmar diesel inboard under the name SHEERWATER, and did a great deal of maintenance and upgrading. 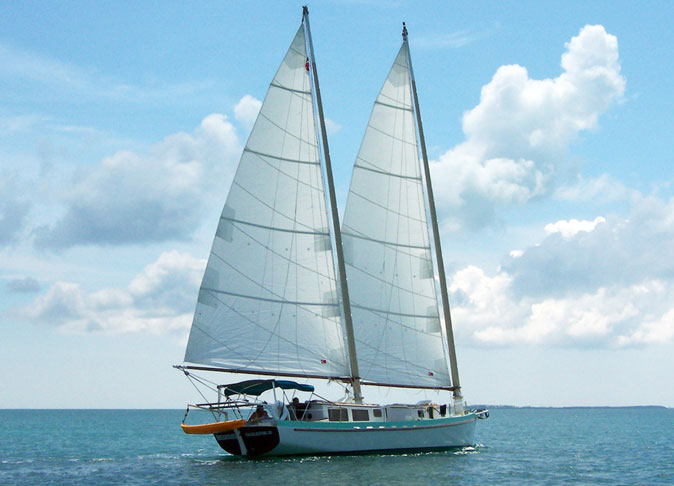 SHEERWATER (ex-TERESA) sailing in the Bahamas under Todd Frizzelle’s ownership.

Todd sold her to John Rennell, who renamed her ISLAND GIRL, under whose ownership she remains at present. 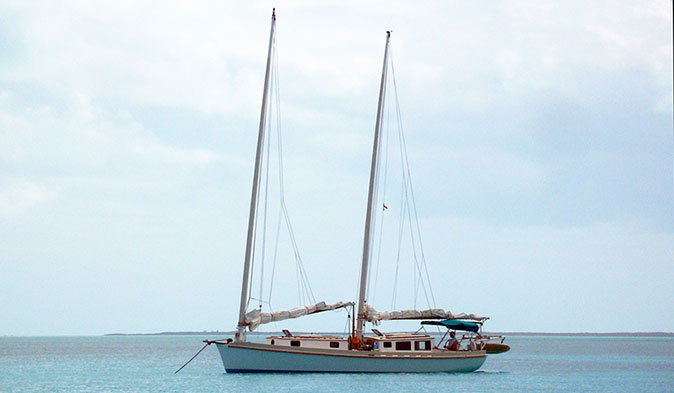 When I was cruising in IBIS in 2012, we got to go sailing on ISLAND GIRL, and she blew my doors off by accelerating to 10 knots on a beam reach in Elizabeth Harbor, putting her lee rail in the turquoise water! What a sweet, sweet ride! 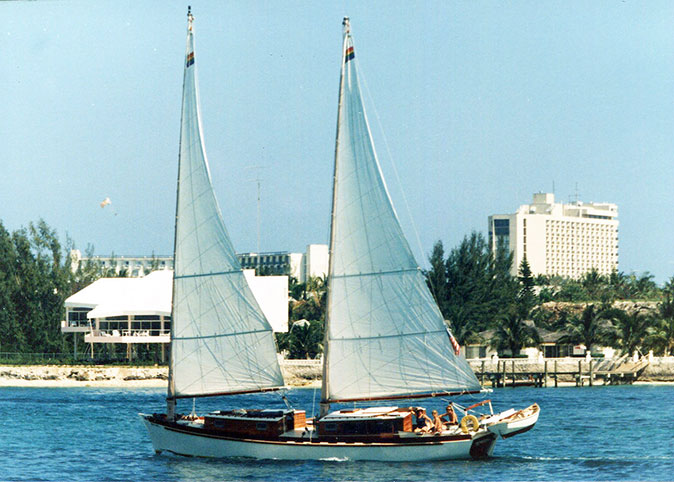 TERESA sailing in Nassau Harbor in 1986, with my dory GANDY DANCER in the stern davits—photo by Capt. John on POOR BUTTLERFLY.

TERESA was my “trial horse”—she survived a violent hurricane, capsized in a race, was struck by lightning, and took me on two excellent cruises in the Bahamas and up and down the Atlantic coast. She survived several collisions with reefs, and could be beached just by putting her bow ashore and dropping her centerboard. I miss her—in many ways she was my first big totally original brainchild… and she taught me enough to fill a book. She was also the simplest and handiest of all my cruising boats to sail—she was wonderful to single-hand, although definitely not an old man’s boat… she was a wildcat!