In the late 1990s it occurred to me to design a trailerable one-design racer. I was living in Key West, and I also saw this as a way to get involved in Key West Race Week, a fairly major event in the world of fast sailboats. 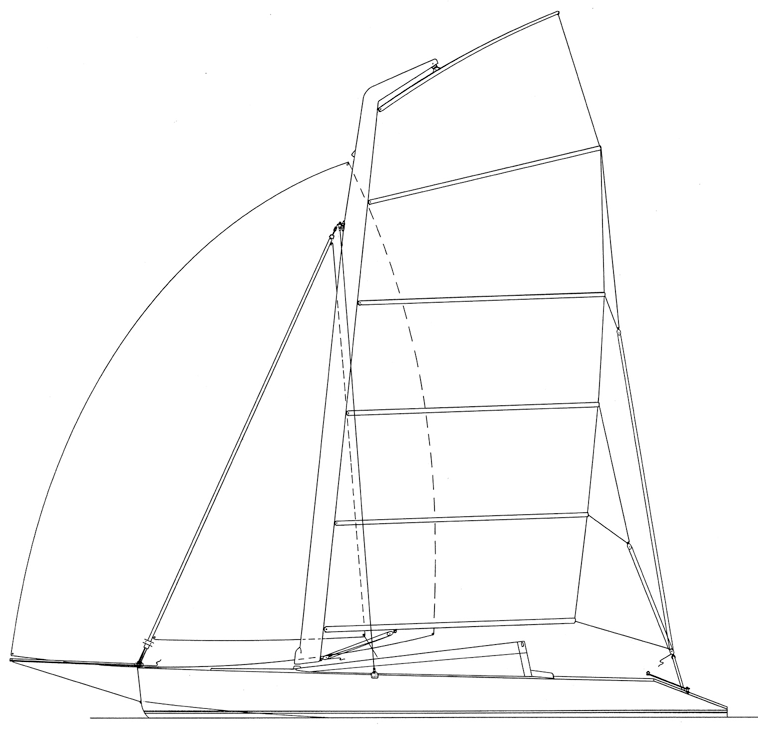 Most small one-design racers have fin keels and require custom trailers, necessitating the use of a crane or Travel Lift to launch and haul them. Without very much knowledge or experience with one-design classes or rating rules, I simply dove into the project. I figured that one-design boats primarily race against each other, so I could design what I wanted… and I had a lot of ideas I wanted to try.

I designed the boat and rig during winter of 1997-8, but didn’t get around to designing the mast until early 1999. I named my design CONCH 32, after the giant, tasty undersea snails indigenous to most tropical and subtropical waters (including the Florida Keys). “Conch” (pronounced “Konk”) is also the knick-name for people born and raised in the lower Keys. Long-term transplants, like myself, who become faux “natives” are referred to as “fresh-water conchs”. The name seemed appropriate for a one-design class designed specifically to be raced in the Florida Keys. Also, my office and boat shop were located in the old Singleton sea food packing plant, which had recently been sold, and re-named The Conch Farm. We built a number of boats there, including the prototype Commuter 36 MAGIC, the three 28′ Swansea Pilot Schooners GLANCE, FRANK and SYLVIA, plus numerous small dinghies and sharpies.

I was hoping that the new owners of the property would endorse my new one-design class as a promotional gambit—perhaps even to the extent of financing one or two boats. Although they seemed excited about it at first, nothing ever happened. 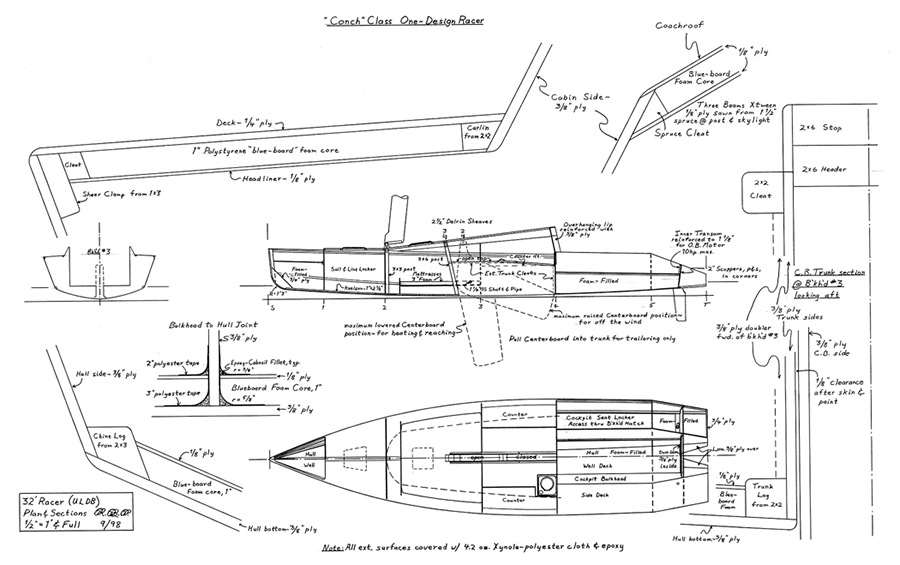 Plan & Construction Sections for the Conch 32.

To make the boat as light as possible, I incorporated polystyrene insulation foam in the hull and decks (Dow “blue-board”, which glues well with epoxy). The hull bottom is tortured marine plywood, arc-bottomed aft and V-bottomed forward. Beam is 8′ 6″ and displacement is 4,400 lbs, making this a trailerable boat. The NACA 0009 foil-shaped centerboard contains lead shot and polyester resin, and becomes a ballasted fin keel in the down position. The twin rudders are also foil-shaped.

The most unusual feature of new my hot-rod sailboat design was her mast. Rotating wing masts are very common in Key West, which is populated by a large number of charter catamarans (called “cattlemarans” locally). From studying and sailing on the big cats, I was intrigued by their rotating wing masts, and wondered why you never see them employed on mono-hulls… so I decided to try it myself. 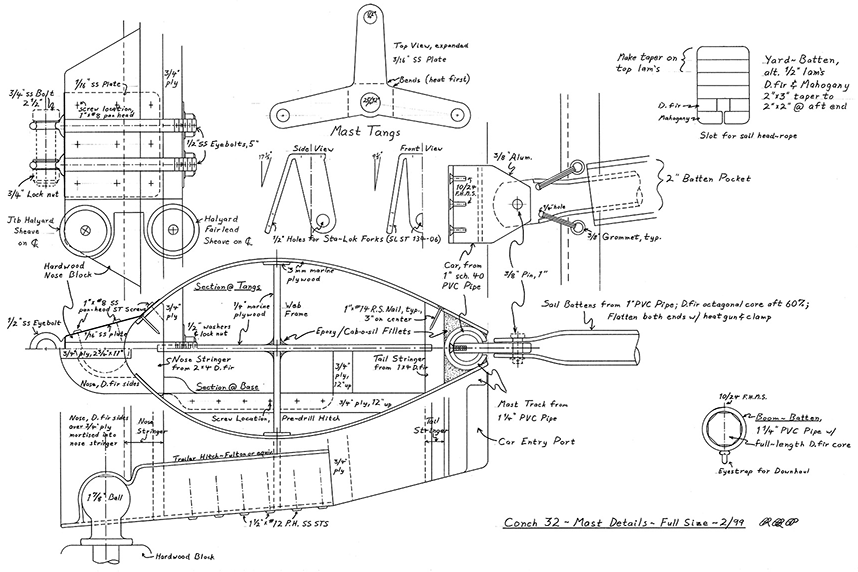 Part of my concept for the Conch 32 was that she be easy and inexpensive to build—no exotic hardware! The few stainless steel components required can be made by a resourceful home-builder with a mini-grinder and bench vise. Mast track, sail-slides and sail battens can be made from standard PVC plumbing pipe and aluminum flat stock. The mast step ball joint employs a standard trailer hitch (a method used by several of the big charter cats). Sheaves use standard Schaefer Delrin replacement parts available from any chandlery or catalogue.

The idea behind rotating wing masts is that the mast fairs into the sail, like a real wing, instead of the sail coming off what is frequently the wrong part of the mast. Visualize a mains’l attached to a mast track on an oval-shaped mast while beam-reaching, and you get the picture. The mast becomes a flat block, contributing nothing but turbulence to overall sail shape. With a teardrop-shaped wing mast that is free to rotate, the mast acts like the foremost bones in a bird’s wing, or the leading edge of an airplane wing. It contributes to sail shape, rather than detracting from it. Many racing multihulls employ a “mast tiller” to further control the juxtaposition of mast to sail. This device is attached to the mast base, with control lines leading to the cockpit, allowing fine-tuning of mast/wing shape. 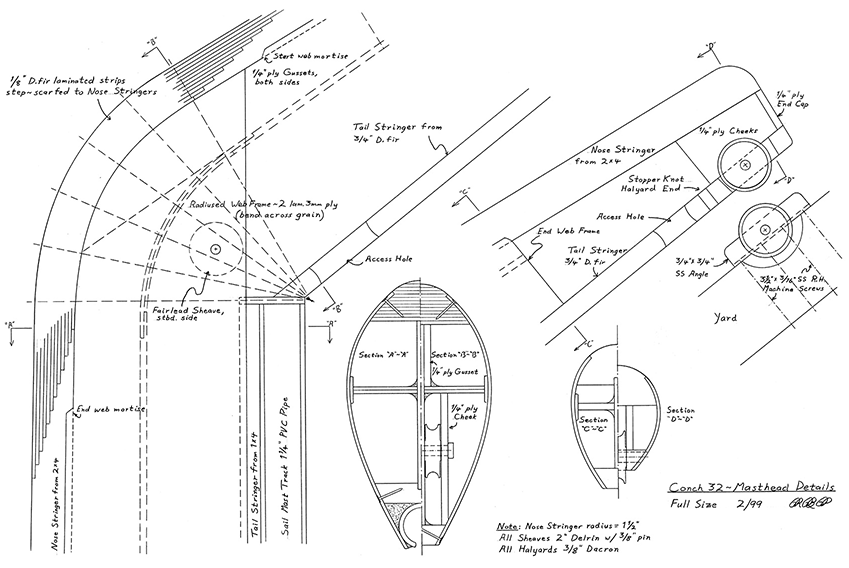 This gave me the bright idea to put the mast tiller at the head of the mast, allowing the sail to automatically orient the mast optimally to the sail. I named my invention the “L-HEAD MAST”. I was also aware of a relatively new trend in sail shape, employing full-length sail battens near or even in the head of the sail. This creates a “Bat-Wing” effect, a trend which has become even more common today, fifteen years later. Some of these new sails even look suspiciously like gaff-riggers, although they aren’t! I might mention here that bat-wing sails have been commonly used on canoes, kayaks and wind surfers for many years.

I wanted my new mast to be as simple as possible, but I had to find a way to make a structural bend near the top, to form the “L-head”… this I achieved with a stepped laminated nose stringer, and pie-shaped skin sections in way of the bend. I designed a mast core consisting of an internal plywood web frame coupled to solid stringers fore & aft. The mast can be made using nothing more exotic than a table saw. I used the web frame compartments for internal halyards, mounting sheaves in integral boxes. I eliminated the infamous “Jesus Shackle” (responsible for numerous dismasting accidents) in favor of standard SS eyebolts and a custom-made tang. 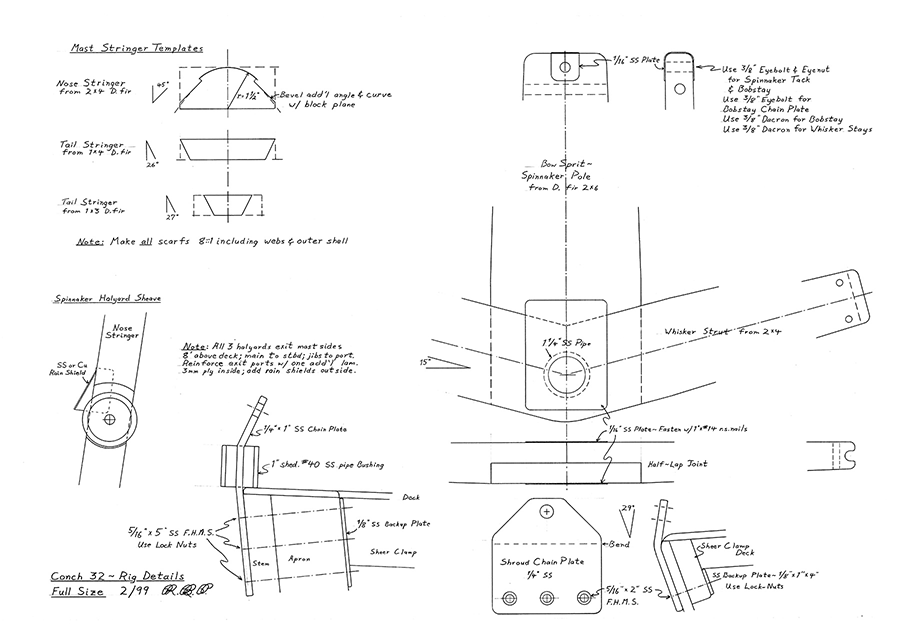 Rig details for the Conch 32.

I also designed a pivoting “bow sprit/spinnaker pole” for attaching a spinnaker tack, allowing the spinnaker to be shifted to windward on a broad reach, out from behind the mains’l.

Despite all the thought and design work I put into this project, it went over like a lead balloon! I have never sold a set of plans for the Conch 32, and one has never been built. I later designed a Conch 19 (a smaller version of the 32), and that one, also, vanished without a trace.

During this time I was avidly studying the Chinese Junk rig, which is where full-length battens for sails originated, and I began to see correlations between Junk sails, lug-rigged sails, full-length battens and multiple sheet leads. My sail plan for the Conch 32 combines various techniques from various rig types spanning centuries of time, all blended together to make something new.

In Part Two on this subject, I will address larger rotating wings employing more modern techniques and hardware, as applied to both monohulls and multihulls.