I spent the majority of my childhood in Bay Shore, on the south shore of Long Island. My father had died in 1950, when I was four years old, and my mother didn’t remarry until 1958. During the intervening eight years, two very kind local men endeavored to fill the roll of father figure and mentor.

One was the janitor/handyman of the apartment complex where we lived. Eddy Pladdys had been partially crippled by a disease (he never said what) when still in his teens. His hands were deformed, and he walked and talked like someone who is very drunk, although he didn’t drink. He could fix anything. Eddy owned a 14′ classic plywood runabout with a Johnson Sea Horse 25 outboard. He kept it in Great River, and on summer weekends we rode our bicycles (he didn’t drive) nine miles, laden with groceries, tent and sleeping bags, to the boat. We explored the many inlets, islands and creeks of the Great South Bay, traveling as far away as 30 miles, and camped out on the beach. Eddy taught me to read charts and plot courses, how to safely operate a small powerboat, outboard maintenance, and how to cuss when things went wrong.

My other mentor was A. J. Dixon—the cross-guard cop at the elementary school. He was also a craftsman and boat builder, and when I was about ten years old, built an eight-foot scow with me. We built her from a couple of sheets of plywood, 1x2 chine logs and sheer clamps, bronze screws, with Cuprinol wood preservative and Dolfinite bedding compound—old school. I kept her on a large fresh water lake, and after a lot of rowing, decided I needed a sail.

I taught myself to sail by looking it up in the encyclopedia. There were neat drawings with sail foils and vector-analysis diagrams, which I grasped easily. When I explained my desire to learn to sail to Eddy, he made me a mast. He must have made it using a table saw and a hand plane, perhaps from a 3x3, tapered and many-sided. I stole one of my mother’s bed sheets, for which I caught hell, and somehow fitted the rig into the boat. I think I used a closet pole as a yard, and consequently could only sail downwind. I ended up on the far side of the lake, and hid my boat in the bushes to wait for wind that would carry me back to my slip behind a friend’s house. When I returned to sail back, a few days later, I found my boat had been stolen. I had taken my mast and sail out of her, and now had a rig with no boat.

Like many boys, I made a lot of soap-box racers, although few deserved that glorified definition. Mine usually consisted of a plank with two cross-planks, steel axles and wagon wheels. The rear plank was fixed (nailed on), and the front plank had a bolt through the middle. The axles were attached with bent nails. Steering was either by feet, or by a rope loop attached to each end of the forward plank. There may have been a seat, and sometimes a foot rest. Propulsion consisted of coercing a couple of boys to push, using sticks, by promising them a ride.

Having a rig and no boat, and a racer with no reliable propulsion, it occurred to me to make a Wind Wagon. I had read somewhere about land-locked sailors crossing the Great Plains in Conestoga wagons with schooner rigs, and it sounded like something I had to try. 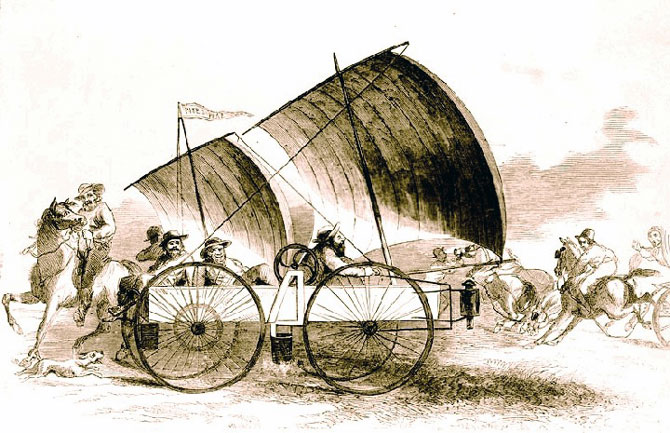 So I made a sort of mast step, with rope shrouds and a forestay to hold the mast up. I sailed north down Third Avenue in Bay Shore, heading for the high school parking lot, on the weekend when there would be no parked cars in the way. The wind was strong and gusty, and I knew the open fields south of the parking lot would give me plenty of “fetch”.

I caused a minor fender-bender when a woman passing me driving south slammed on her brakes at the shocking sight of a small boy tooling down the road in a bizarre-looking sailing contraption. The man behind her was also shocked at the sight, and didn’t manage to stop in time. I felt bad about this, but I couldn’t stop even if I had wanted to (never having considered brakes). Besides, I seemed to always be getting in trouble, and this was trouble I didn’t need.

When I got to the parking lot, my wind wagon took off like a scalded cat—the wind was really honking. Along came a big gust, and the rear end of my racer came right up off the ground, tossing me ass-over-teakettle! Thus I learned, the hard way (I always seem to learn important things the hard way), what “pitch-poling” meant. I also learned what “dismasted” meant. I ate the asphalt, face down, at high velocity, and got a lot of “road-rash” (not a sailing term): bloody hands, elbows and knees, with gravel embedded…

There wasn’t much left of my racer. The mast was broken in half, the sail shredded to ribbons, the axles bent beyond repair, and the planks torn apart. I limped home with my precious wheels—the only things I could salvage. And I caught hell again!