The Bights of Andros—Part One: South Bight 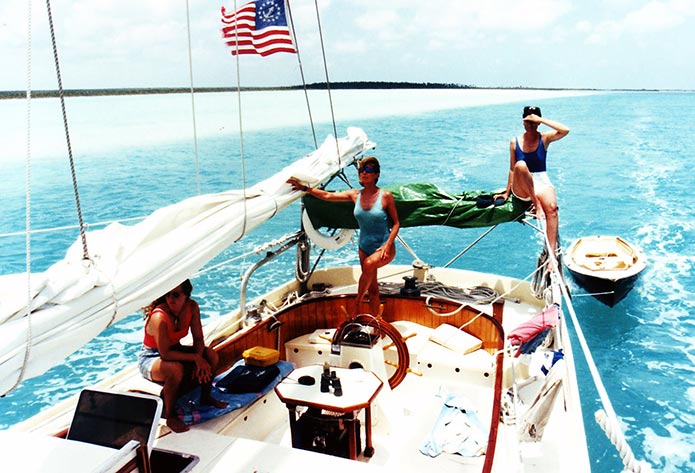 In the South Bight of Andros—LEOPARD’S Crewmembers Amy, Scotty & Kris.

In my eternal search for alternative ways of doing things, I have sought for many years to find an expeditious route from South Florida to the central and eastern Bahamas. The obvious route is to sail from Key Biscayne to Bimini, clearing into the Bahamas there. From Bimini, most yachts with a draft of eight feet or less cross the Bahama Banks to Chub Cay in the Berry Islands. Vessels of deeper draft cannot even enter Bimini, and must run the Northwest Providence Passage directly to Nassau—a much more lengthy trip, requiring running day and night in the open ocean—against a strong current. The basic problem with either of these routes is that they are almost always a dead beat to windward in powerful trade winds, and, for slower vessels, the Bimini to Chub Cay passage cannot be made during one run in daylight hours. Navigation in the Bahamas requires good light, to see the bottom; hence slower vessels should time their arrival in Chub Cay for daylight, which means leaving Bimini in daylight, sailing overnight (with a very slight risk of encountering a coral head), and arriving in Chub Cay the next morning or later. Only once have I tried anchoring on the Banks in windy conditions, and it was so rough that we had to weigh anchor and proceed in the dark.

What I have done for many years is to leave Bimini at first light, enter the Banks just to the south (with light to cross the reef), and to motorsail as rapidly as possible to Chub Cay. Sometimes all you can carry is a steadying sail, sheeted nearly flat, running the diesel at nearly full speed. Even so, there have been times when I had to enter Chub in darkness (fortunately, there are some aids to navigation there).

In early 1995 I sailed from the Florida Keys to Bimini, as usual. We were sailing in my new 75′ LOA pilot schooner LEOPARD, which I had recently designed and built (my forth cruising sailboat—see Blog #34). The wind had been blowing hard out of the east for weeks, and we had the roughest Gulf Stream crossing I have ever made, out of dozens over the years. My log states that we sailed in driving rain and violent squalls that reached gale force at times, in short, steep seas 12- to 15-feet in height.

After drying out and spending a couple of days in Bimini, we departed for Chub Cay as usual. But the wind and seas (still dead on the nose) were so powerful and rough that our progress was poor—tacking a big gaff-rigged centerboard schooner with the diesel auxiliary running full bore—and I soon made the decision to stay on the port tack and run behind Andros to seek calmer seas. I had never done this before, and I started studying my charts to see if there was some alternate route eastward. Andros is riddled with bights (creeks and estuaries) that run completely through the middle of the big island, and I wondered if LEOPARD, drawing just four feet, could cross the island through one of these passages.

I have been exploring Andros for over thirty years, but had never been on the west coast—nor had I ever even heard of anyone sailing there. My initial trips were confined to Andros’s east coast and northeast corner (Morgan’s Bluff), where I could sail FISHERS HORNPIPE, my first cruising sailboat (see Blog #31), which drew seven feet. In TERESA, my second cruising sailboat (Blog #32), we sailed down the east coast of Andros at least once. 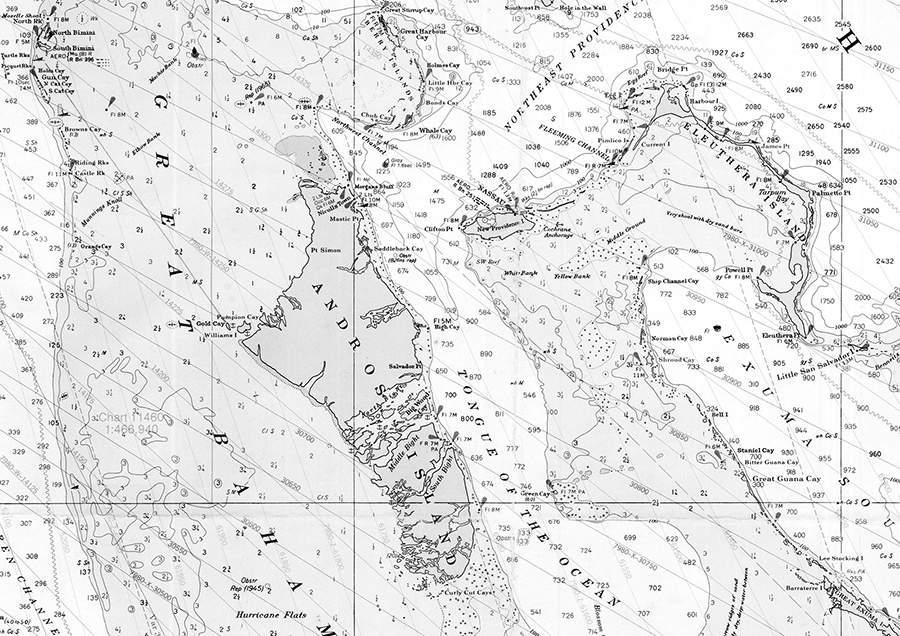 Andros and approaches—almost the entire west coast of Andros is uninhabited; the straight line on the chart from Bimini to Gold Cay shows my plotted course, typically a fast, close reach in the winter Trade Winds (soundings are in fathoms).

Andros is the largest of the Bahamian islands, and is the sixth largest island in all the West Indies. It is 104 miles long, north to south, and 40 miles wide. The east coast of Andros is protected by the world’s third-longest barrier reef, has several small settlements, a few dirt-strip airfields, and a handful of small resorts and hotels. The lengthy west coast of Andros (considerably more than 104 miles) is completely uninhabited except for Red Bay, a tiny settlement on the northwest corner. A vessel drawing only six feet can actually run aground out of sight of land along this mysterious coastline, and there is absolutely no place for such a vessel to go to! The Bights are very shallow—three feet and less at low tide, and the Banks off the south end of Andros are poorly charted, shallow, full of coral heads, and riddled with shifting sand bores, some of which cannot be navigated at all. The Banks off the north end of Andros are even worse—they must be skirted in favor of the westerly approach to the Berry Islands well to the northeast. Hence in 1995, I spontaneously made the decision to look into exploring the Bights of Andros. The worst that could happen is that we would find them to be non-navigable (assuming we could even find an entrance channel), and would have to sail north, and cross above Andros to Chub Cay, losing a few days, but having an adventure.

The distance from Bimini to Gold Cay—the westernmost tip of Andros—is over 90 miles, but LEOPARD made short work of it, and we approached our landfall well before sunset. As we closed with Andros, the seas diminished in size, but the wind held steady, and we had a lovely, fast close reach toward the westernmost point of the big island. My charts showed two small islands just off the point: Gold Cay and Williams Island. The chart showed no detailed soundings or any other information. My trusty old Yachtsman’s Guide to the Bahamas showed nothing either. We anchored (very carefully) in 5 feet of water (LEOPARD draws four feet) off the southeast side of the cay, in nearly calm seas, and settled down for a pleasant evening and night. Scanning Williams Island with binoculars, I saw the tail of a small airplane sticking up out of the sand!

By the time it was fully dark, I looked up at the sky and was stunned by the sight. The stars and planets were the clearest I had ever seen them (there was no moon). Lying on my back, with 7x50 binoculars, I could cruise the Milky Way and see the moons of Jupiter. I then realized that the nearest electric light—indeed, the nearest human being—was over 40 miles away. We were in a wilderness area less than 150 miles from Miami!

The next morning we proceeded to reach south down the west coast of Andros, seeking an entrance channel for South Bight about 60 miles away. I chose South Bight because my in-situ research indicated that it might carry more water than North Bight. Because the gently sloping Banks are shallow for well over a mile from land in many places, we could not get close enough to easily seek an opening. The chart showed an entrance to South Bight that appeared to have some markers, but the place we saw that could have been it was too shallow for anything but a dinghy. All land features looked the same—mangroves, palmettos, shrubs and small trees. There were no navigational aids of any kind—not even a stick in the mud—and the charted information was from British surveys dating back to the 1800’s. We finally gave up as we lost our light, and anchored just off the coast.

After several more hours of searching the next morning, we found the trace of a turquoise channel by climbing up in the rigging, and worked our way in until we saw what we hoped was the entrance. This channel was about ¾ mile southwest of the charted entrance (according to my brand-new GPS). The channel was beautiful: a turquoise serpentine passage almost brushing the mangroves on both sides. Harry Kline, in his excellent Yachtsman’s Guide, mentions navigating the Bights, but his instructions are sketchy, and his sketch charts for the Bights really show no details. We were clearly on our own, and felt like explorers in a new world!

I conned my first mate (the late Camden, Maine lobsterman Red Robard) from 20-feet up on LEOPARD’s ratlines, the only place where I could see the channel, and we soon came out onto a huge white “lake” of soft marl. Implementing a real act of faith, we plowed through the “mayonnaise” at speed, churning up clouds of white mud in our wake. We had no way of knowing the depth, but it was clearly less than our draft! We headed east, hoping that the channel through would become evident. Several years later, traveling in the opposite direction, we ran aground in this lake and were stranded for almost 24 hours until the tide ran higher. 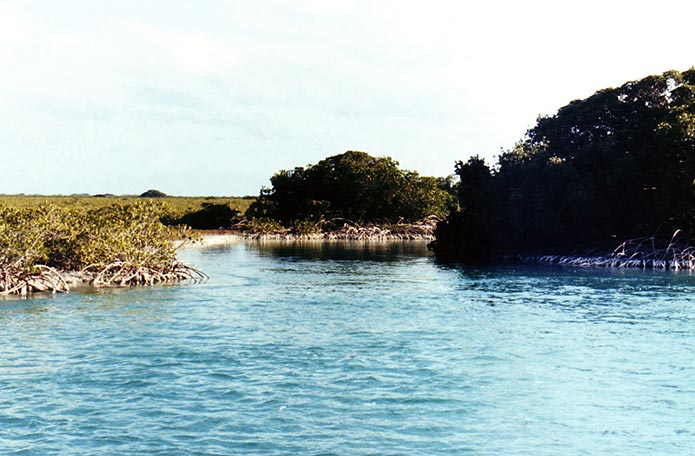 The hidden entrance to South Bight.

Many years later I researched the Bights in Google Earth, and confirmed exactly my waypoints for the passages. A vivid example of how tricky this passage is can be seen on the satellite map below: A deep, clear blue channel runs to the left of the large midstream islands, but completely vanishes into marl flats only inches deep! Hence the real through-channel is to the right, in much shallower water. 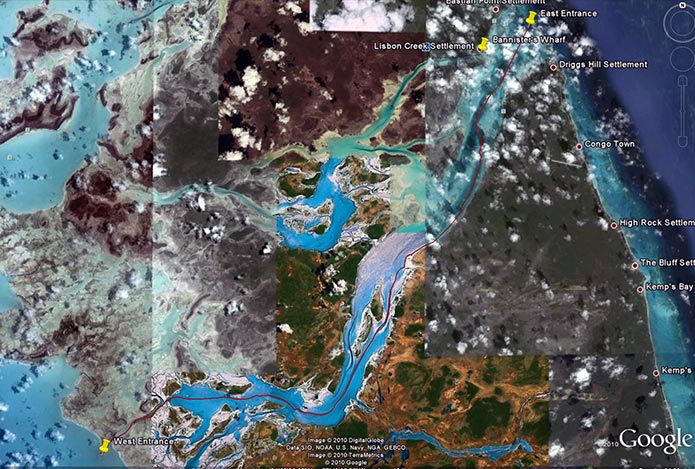 The South Bight of Andros, Courtesy of Google Earth; the serpentine entrance channel opens onto a huge white “lake” seen above in turquoise. 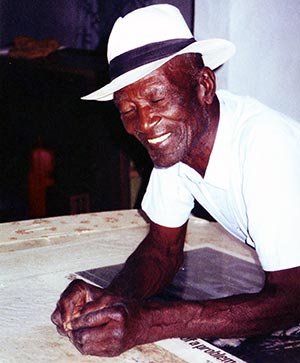 South Bight is about 26 miles long, and ends just beyond Lisbon Creek, home of the late Leroi Bannister. We anchored LEOPARD in the Bight and rowed my dory GANDY DANCER ashore to look for a tiny hotel which was reputed to serve excellent seafood. We left first mate Red on board, and when we returned, he was talking with a very dignified black man in LEOPARD’s cockpit. This was Leroi Bannister, who invited us to tie up at his wharf in Lisbon Creek, which of course we did. Mr. Bannister was a master-builder and racer of traditional Bahamian sloops, and it was a great honor to visit with him before his death in 2008.

I returned to South Bight several times in LEOPARD, and years later explored North and middle Bights, which I will write about in a future blog. 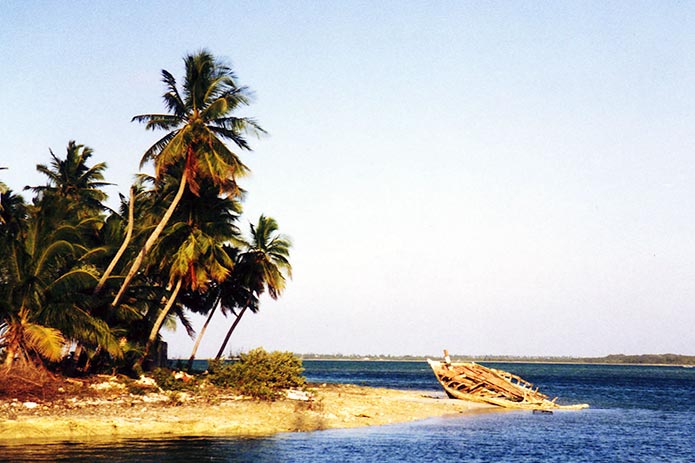 The wreck of a Bahamian Sloop in Lisbon Creek—South Bight is just beyond.

Author’s Note: Parts of this Blog are excerpted from my article Cruising the Bights of Andros, which I sell through my website www.parker-marine.com. Also, an abridged version of that article appeared in Latitudes & Attitudes Magazine in 2011. My GPS waypoints are included in the article.