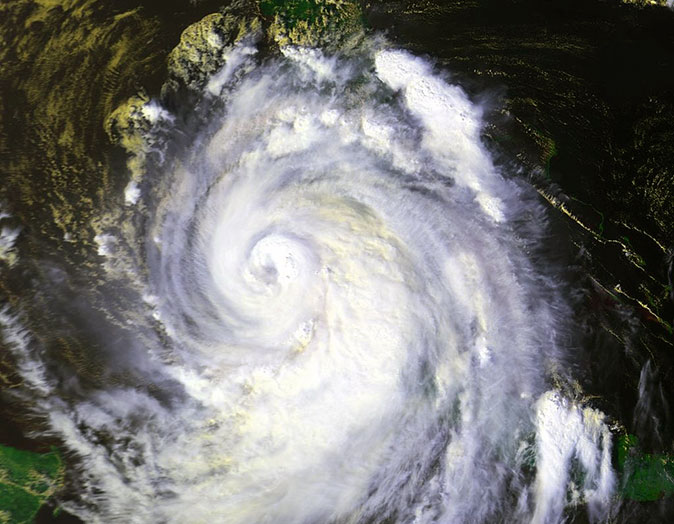 I recently read Jim Carrier’s excellent book: THE SHIP AND THE STORM—Hurricane Mitch and the loss of the FANTOME. This is a very sobering non-fiction book, published in 2001 by International Marine (my original publisher), and re-published by Harcourt/Harvest in 2002.

Hurricane Mitch, of October 1998, was one of the most powerful and destructive storms in recorded history. It was, at its worst, a Category 5 hurricane with sustained winds of 180 mph. It caused over 19,000 fatalities, mostly in Honduras, but also in Nicaragua, Belize, Guatemala and Mexico. Mitch sank the 282-foot four masted sailing ship FANTOME, a Windjammer Barefoot cruise ship, on October 28, near the Bay Islands of the Gulf of Honduras. Through a combination of very bad circumstances which compounded each other, the FANTOME essentially sailed right into the center of Mitch and was overcome by horribly confused seas reaching more than 50-feet in height, and winds over 150 mph. Thirty one men were lost, all crew and staff. The charter guests had fortunately been removed in Belize City, and flown in a charter flight to Miami.

The captain, crew and staff of FANTOME were well known and liked throughout the Caribbean. They were very professional, highly experienced, and respected as professional mariners. There were also some new and less-experienced men on board, being trained. The charter boat professionals of the Caribbean, as well as many cruising sailors like myself, were greatly shocked and upset by the loss of the FANTOME, and speculation went on for years about why this disaster occurred, and what might have been done to prevent it. This is one of the subjects of THE SHIP AND THE STORM, and I encourage those of you who are interested to read it. It is research journalism at its best.

Mitch followed close on the heels of Hurricane Georges, of late September ‘98, which swept through the Florida Keys as a Category 2 hurricane, after raging through the Virgin Islands and Puerto Rico as a category 4. Hurricane Mitch also made a passing swipe at devastated Key West on November 4, after being downgraded to a tropical storm. Looking like a black squall line, Mitch still packed gusts of 60 knots.

I remember these storms vividly, even though I wasn’t directly in them. My schooner LEOPARD was in Key West when Georges struck on September 25th, but I wasn’t. I had been in Maine for the summer, going through radiation treatment for stage four cancer, and came racing south in my old Toyota Land Cruiser as fast as possible to get to LEOPARD.

Normally, I do not leave my boats in a place where harm can come to them, especially from severe storms. But because I was fighting for my life, I had no choice. I went through two major surgeries in Key West in early 1998, but the timing and circumstances placed me in Maine for the seven weeks of radiation treatment. I had been living on board LEOPARD in the old Key West Seaport—a defunct fish processing facility in Key West Bight (the old harbor).

In preparation for my long (six month) absence, I tied LEOPARD up midway between two stout piers, with breast lines, spring lines, side lines and stern lines—many doubled—of ¾″ and 5/8″ 3-strand Nylon. The lines were set up with a little slack, to handle a potential storm surge, with lots of chafe gear. A diver friend took one of my ½″ chain rodes down to the harbor bottom and shackled it to the old hurricane chain—a massive, ancient chain expressly placed for the sole purpose of riding out severe storms.

My close English friend Lucy, who was helping build our three 28′ Swansea pilot schooners (one of which was hers), holed up in the old Singleton icehouse during the worst of Georges, looking after the three little schooners and keeping an eye on LEOPARD. (She had been living on LEOPARD, but got off as the storm approached.)

When I returned to Key West in October of ‘98, I had a hell of a time getting there. The Overseas Highway (US 1), was closed off just south of Homestead, and police were not letting anyone through. I had to convince them that I was trying to get to my schooner in Key West, that she was my primary home, and that I had no knowledge of her situation. I finally got through, and was shocked by the devastation everywhere I looked. 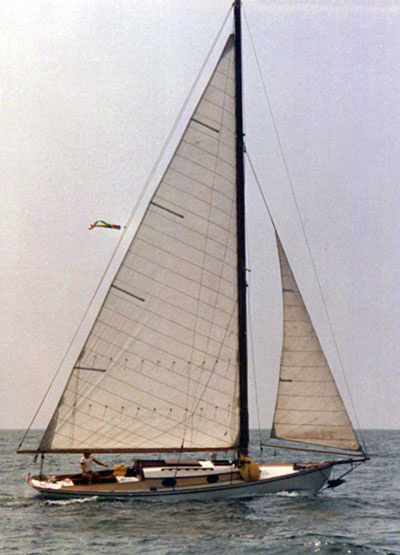 Lucy told me that in the worst gusts, LEOPARD was heeled over to 45 degrees or more, and that her windward dock lines were stretched out bar-taught and rang like banjo strings! The only damage to LEOPARD was chafe, and my dory GANDY DANCER got her transom broken, but these things were easy to fix. I was very lucky—many other boats were severely damaged or sunk.

One of the victims was my beloved 1926 Alden Malabar Junior IMAGINE, which was then owned by a friend. She was torn from her three mooring anchors behind Wisteria Island (just off Key West), and smashed to splinters on the reefs off Woman Key. All that was found was her cast iron keel, with part of her stern post. I was later told that the young man who owned her had to be restrained from taking his own life over this devastating loss. Earlier that year, an Alden surveyor had pronounced her to be in the best shape of any surviving Malabar Junior. I had restored IMAGINE twice—once, traditionally, in 1981-82 (see A Story of Priorities, WoodenBoat #65), and again using cold-molded techniques, in 1989-90. She was a member of my family, as were all her owners.

At that time, because of the life-threatening situation I was in, and because I was nearly destitute from paying medical bills, I had advertised LEOPARD for sale. I knew I could not keep my schooner. I found a buyer almost immediately—in fact I found three potential buyers, and had to defer to the one who was first in line.

Lucy and I left Key West on October 26, headed for Riviera Beach, where LEOPARD would be transferred to her new owners, Jeff and Jana Thomas. We arrived there on October 30th, and my log book says we were in 20 to 30 knot northeast winds (right on the nose) for the whole trip. So we got away just before Hurricane Mitch came through.

We moved LEOPARD to Riverside Marina in Ft. Pierce to make modifications for her new owners. Working with my partner Bill Smith, we repainted the hull topsides dark green (it had been black), converted the port side cargo hold into a double sleeping cabin with separate head, added a second fuel tank to the starboard cargo hold, converted what had been my office forward into a new master’s cabin, and converted my captain’s cabin aft into a large navigation station and office. LEOPARD was transformed from a cargo schooner into a yacht! 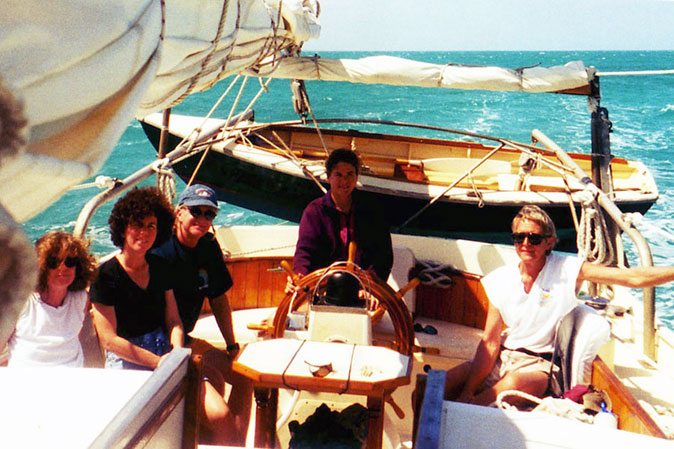 LEOPARD during her final trip to the Bahamas with me on board—from left to right: Bridget McDonald, Jana & Jeff Thomas (LEOPARD’s new owners), Lucy Trinder, and Reuel Parker—photo by Scotty Folger.

After the work was completed, in early 1999, Jeff asked me to sail to the Abacos (northern Bahamas) with him and his family, to “show him the ropes” as it were. I brought three close friends with me, all of whom had sailed on LEOPARD previously. We had a good trip, although it was a bittersweet one for me. After a pleasant, though brief sojourn in the Abacos, my three female crew and I flew back to Florida, while the Thomas family and LEOPARD stayed. 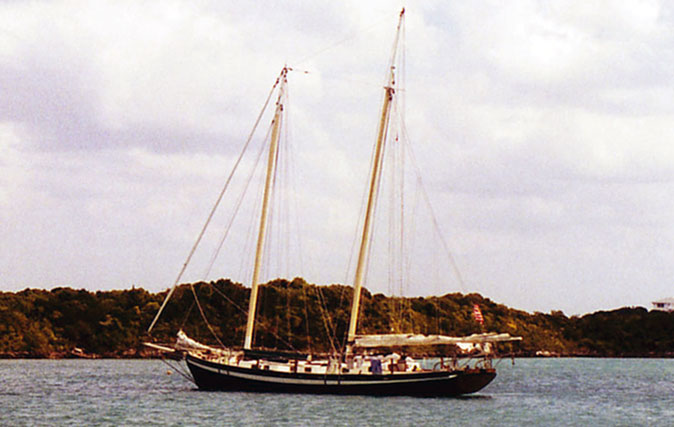 LEOPARD anchored in the Abaco Islands, Bahamas, in early 1999.

Many years have passed since that time, and at least three more devastating hurricanes have swept South Florida, as well as numerous minor ones. Two years ago I was driving south, from Maine to Florida, just as Hurricane Sandy pulverized New Jersey and New York. I diverted my route far inland, through Pennsylvania on Interstate 81, and still drove through two days of blinding rain and gale force winds. 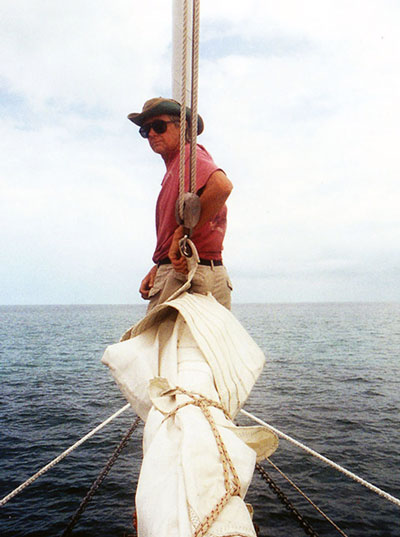 The author on LEOPARD for the last time.

LEOPARD was relocated to Virginia, as the Thomas family live in Richmond. This past winter, Jeff sold LEOPARD because Jana is having health problems, but I have yet to meet her new owner.

Jim Carrier’s book made me think about hurricanes, and hurricane tactics, including preparing for the one that looks like it’s coming right at you!

LEOPARD survived Hurricane Georges because she was tied between two very strong piers, no closer than ten feet from either one, with approximately twelve 5/8″ and 3/4″ slightly slack Nylon dock lines “spider-webbing” her in place, plus her 150 lb fisherman anchor set off her bow, and a ½″ chain rode shackled to the massive old “hurricane chain” permanently left on the bottom of the harbor. IMAGINE was lost because her anchorage was poorly protected, and her moorings inadequate for a major storm. Her owner was out of state.