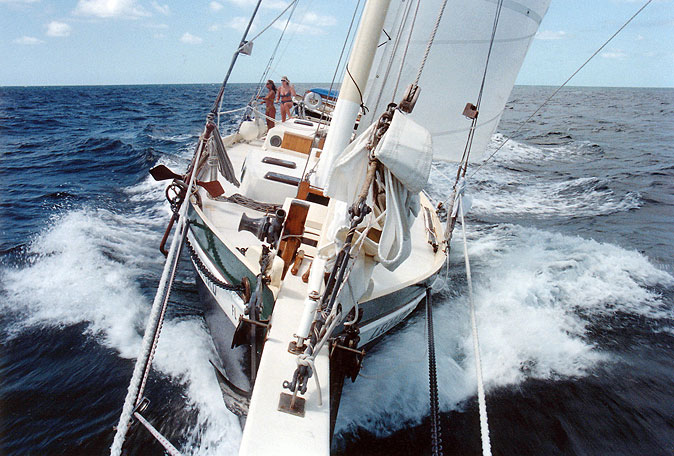 In the early 1990s I leased a large steel industrial building just north of Ft. Pierce, Florida. I had recently split up with my third “wife” in Key West, and moved back to the Ft. Pierce area to set up a new shop where I could work more efficiently with Bill Smith, my boat building partner (he was tired of commuting to the Keys). In 1991 I received a commission to design and build a modern 55′ schooner (the Exuma 55 WILD HARE). We started construction that fall.

With a work force of four people, and some help from my client, we built WILD HARE in one winter season, and commissioned and launched her in the following fall of 1992.

During this time, my mother and step-father passed away, and left me a very modest inheritance. Combined with my earnings from WILD HARE, I felt had enough money to start construction on the “ultimate” cruising boat of my dreams—a 60-foot on deck Virginia pilot schooner. I had been studying early pilot schooners for many years, and was infatuated with a Virginia pilot boat whose lines had been taken off in the 1820s by the French Naval Constructer Marestier. Howard Chapelle, curator of the Smithsonian Institute’s naval division, was also clearly interested in this design, and published it in three of his books. 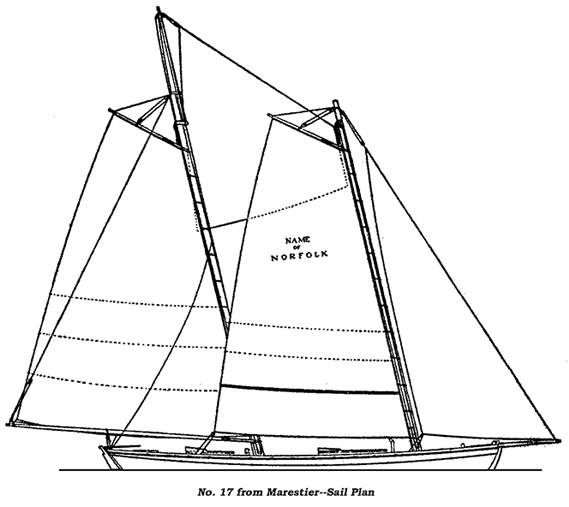 The original model was 57′ on deck, very beamy, and had a long, full shallow keel. In adapting the design for my own, I lengthened the hull to 61′, decreased the beam to 15′, and gave the hull a centerboard, with a draft of 4′.

Specifications for the Pilot Schooner 60 LEOPARD:

I was able to extensively modify and re-space the mold frames and strongback from the previous schooner, saving time and money. With my partner Bill Smith, two junior employees (a teenage girl and boy) and part-time help from friends and co-workers, we started construction on the pilot schooner in the winter of 1992. 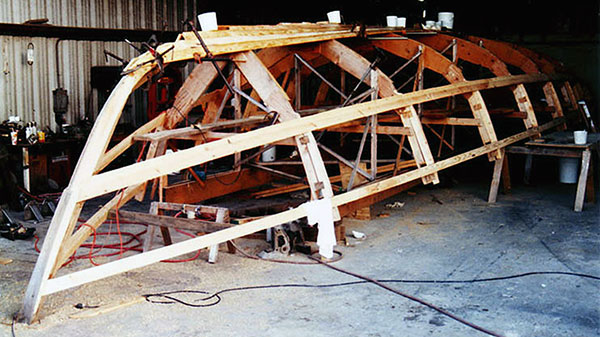 The construction method I used was the same triple-laminating method that was the cornerstone of my first book, THE NEW COLD-MOLDED BOATBUILDING: Double-diagonal ½” marine plywood planking over 7/8” tongue & groove solid Douglas fir planking laid longitudinally, with topsides consisting of two laminations of staggered, segmented radius-planked marine plywood (1/2” over 5/8”). We built a welded steel “Flatiron Keel” and filled it with molten lead, and integrated it into the full-length solid yellow pine wooden keel. 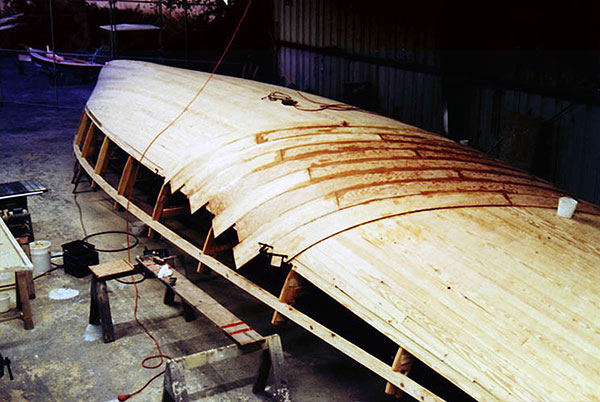 The project went well, but it was expensive and demanding. I found myself working my typical seven days a week, with my evenings spent inside the hull planning the next phases of construction. After spending an abbreviated summer in Maine, I returned to work in the fall, redoubled my efforts to finish the schooner, and launched her in March of 1994. I named the new boat LEOPARD, never having seen a vessel with that name, and because I already realized I had created a wildcat! 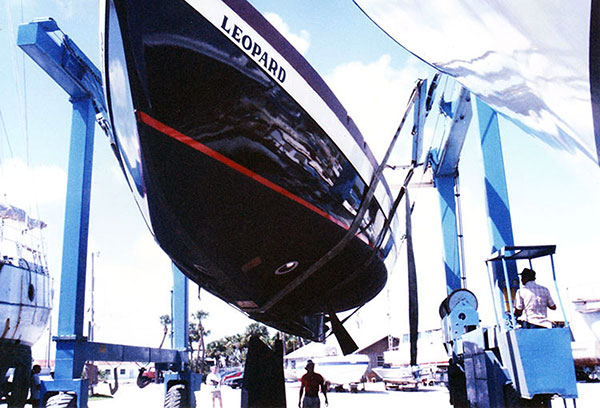 LEOPARD prior to being launched at Riverside in March of 1994; she is being lowered onto her huge centerboard; note the underwater viewing ports in her hull, and copper lightning grounds.

I stepped LEOPARD’s lofty masts without rigging, and motored her single-handed to Norfolk Virginia, to my late friend Capt. Lane Brigg’s Rebel Marine Services, where I rafted up to a barge, and spliced all my 7x7 wire rope standing rigging in the rainiest July on record. I then set sail for Maine with two teenagers (Pagan Hill was my first mate—see Blog #32). I took things slowly at first, learning what it was like to sail a gaff-rigged pilot schooner with an overlapping fores’l.

I soon understood that I had a very unique vessel under me, and that my dream of owning a modernized early 19th-century pilot schooner had been dramatically realized. I had been theorizing for years that the early American pilot schooners had something vital to teach us—something we had lost in the corridors of time—and that LEOPARD was re-created to teach us those lost lessons. LEOPARD easily reached speeds of 12 knots and more on a reach, and she could make tacks within 100 degrees, maintaining high speed. She won first place in the 1994 Chesapeake Bay Great Schooner Race in gale-force winds. I was a happy man! 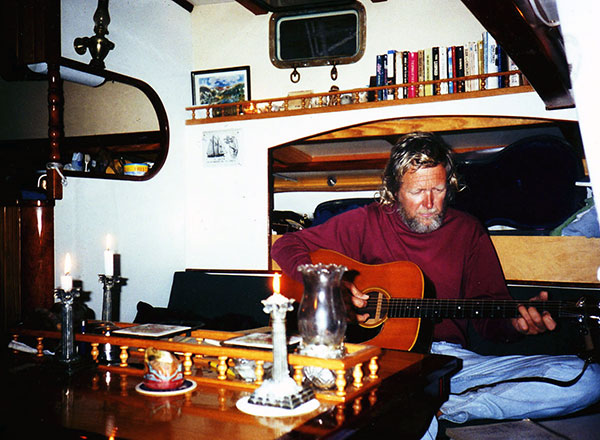 That fall I sailed her to the Bahamas, a whole new experience with a vessel capable of her speed and weatherliness. LEOPARD could beat to windward in gale-force winds, and could be easily managed by a crew of four in all conditions except racing, which required seven when using her tops’ls. 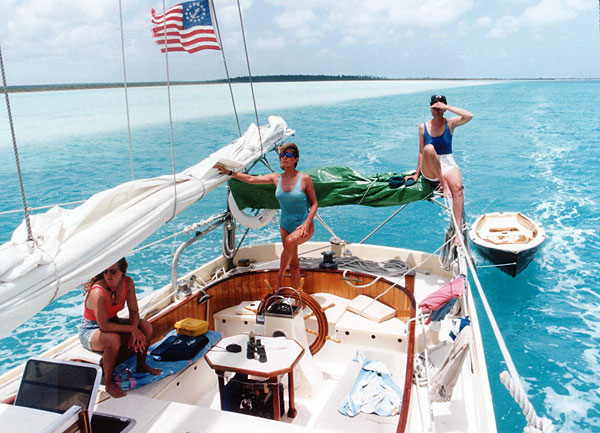 Her overlapping lug-fores’l was a new experience for me, and I came to dearly love that sail. It was easy to raise and lower, having no boom, topping lifts or lazy jacks, and it could be furled on deck between my legs, safely and rapidly. The power and utility of that sail were unlike anything I had ever experienced—like a huge Genoa jib on a perfectly rigid forestay. I had built some “pre-curve” into my masts, such that when sheeted in, the fore and mains’ls flattened slightly, providing more power to windward. For cruising, LEOPARD could be managed under full sail by two people, even with two sails that had to be tacked when coming about (the helmsperson could easily tack the lug fores’l alone). As a concession to convenience, LEOPARD had three large sheet winches (two for the jib; one big center-mounted winch for the fores’l)—all other running rigging being block & tackle. 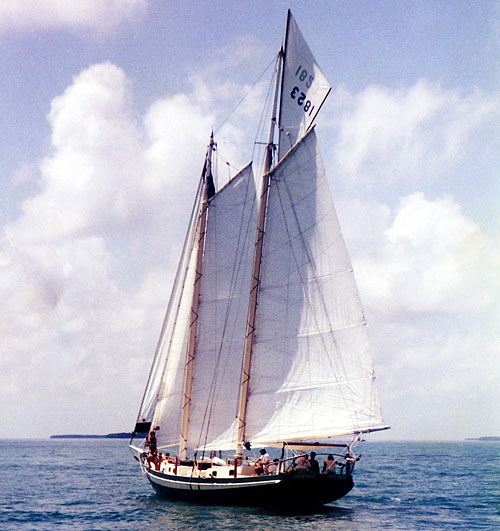 I sailed LEOPARD for five years, living aboard but moving my shop and office back to Key West. I sailed her to Nova Scotia in 1997, and made three excellent cruises to the Bahamas.

In early 1998, I was planning to sail to the South Pacific—another life’s dream—when I was diagnosed with stage-four cancer. I had just turned 52 years old, was otherwise healthy and fit, and my life came crashing down around me. I spent that year in and out of hospitals, and I knew I would have to give up both of my life’s dreams. I had no health insurance, and no nest-egg of saved money. I was wiped out.

In late 1998, after surviving hurricane Georges (see Blog #19), I sold LEOPARD to Jeff and Jana Thomas, of Virginia. I sailed to the Bahamas one last time with Jeff and his family, as a shake-down cruise for them, and bade my dream schooner goodbye for the last time.

In late 2013, due to Jana’s failing health, Jeff sold LEOPARD to Lee Edwards, who is in the process of giving her a major refit (she had been sitting on the hard for several years). I look forward to seeing her back in action! 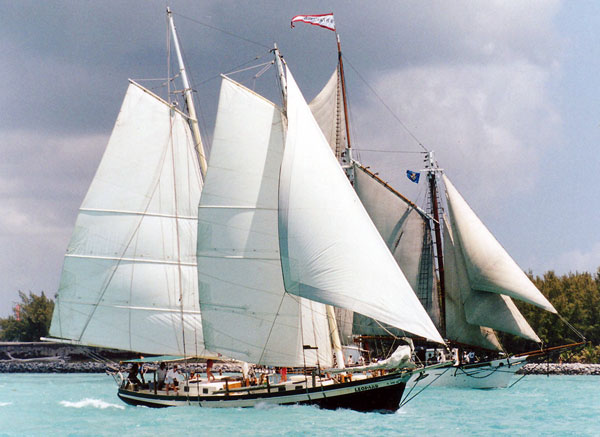 LEOPARD starting her final Key West Wrecker’s Race, in March of 1998; the schooner behind her is the WESTERN UNION